Analysis Hardware Will PC be able to replicate the new consoles SSD solution?

diffusionx said:
The thing is, though, that virtually every game these days is designed to come out on all platforms. The amount of titles that only come out for a single console is very small. Look at PS4 - how many true exclusives have there been? 75 at most, ten a year? Microsoft is not releasing a single game exclusive to Xbox, and we don't know exactly what Sony's plans are going forward. This isn't to slight consoles or anything, but to point out it's not 2002 anymore and games and engines are designed to be multiplatform, flexible, and scalable. I'm interested in getting a PS5 but I doubt the wisdom of Sony's approach in designing the hardware for exactly this reason. How many games will actually take full advantage of their design?
Click to expand...

psorcerer said:
The question is: how many CPU threads at 100% to decompress at 9GB/sec?
Hint: it can be pretty painful.

Current NVMe standards are limited to PCIex4 which is 7.8GB/sec
Click to expand...

And that's why GPU's come in. If that chip was not in the PS5 the PS5 would not be slamming in that box a 16 core ryzen cpu just to waste it on compression, it would simple take the hit on the GPU front and call it a day.

No current x4 or x8 slots are limited towards that speed, SSD's are not limited towards these slots. U can slam them into a x16 slot and u can slam even multiple in there. U need some cpu lanes tho, but hey its perfectly possible. Reason why nobody does it however? u get exactly zero gains other then brag rights because nothing other then video editing makes use of it.

I think linus did some test video about this a while ago, sadly it was riddled with trolls that took great offense as they saw it as a attack on there favorite game station for some reason and tried to shit as best as they could all over it. That's 2020 for you.

The current PC limitation are below:

Limitation currently for PC = 63gbps on the SSD front as u can raid two of them. and about half of that on pci-e 3.0. And that's RAW not compressed. With compression the sky is the limit really.

Unlike AMD fanboys want people to believe intel wasn't trolling when they said they don't see much use in 4.0 at this point and AMD probably agree's with this as i could see them jump on the 5.0 wagon in 2022 in there first products already. Pci-e 4.0 is nothing but a marketing stunt by amd at this point to make there chipsets look more modern while weaker vs the competition. Smart business.

Sadly nobody will tell u that, because they all visit those shitty youtube experts that have no clue themselves and google everything themselves from other tech youtubers. That's why i laugh at these clowns 24/7 whenever they make a youtube video about shit they don't even understand themselves and make complete fools of themselves while they are at it.

Sadly there is always a array of npc drones that will come to their rescue and take their diarree and spread it all over the net like its some kind of fact because he said so and has a bunch of viewers so it must be true right? lol
Last edited: Jul 16, 2020 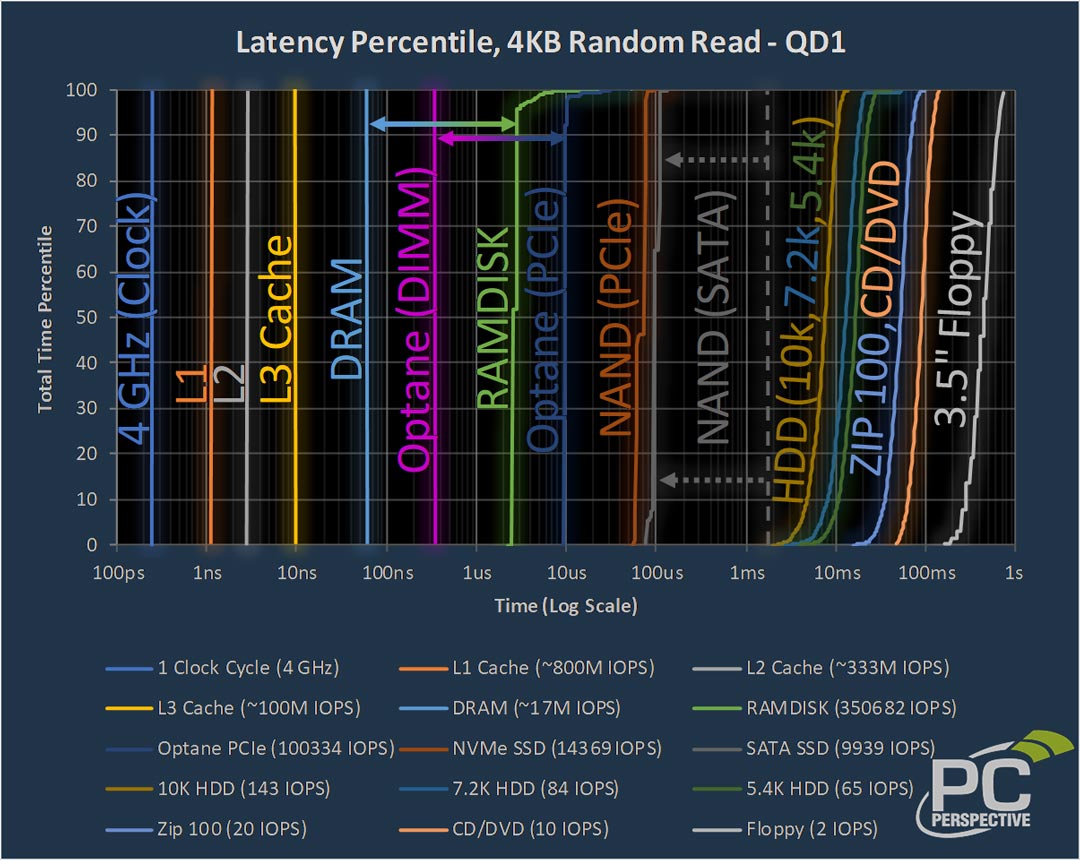 PS5 is lower latency than Optane.
More or less the same as RAMDisk.
For 64K blocks. Consoles have no use for legacy 4K PC blocks.
Reactions: Rikkori
P

Kenpachii said:
Limitation currently for PC = 63gbps on the SSD front as u can raid two of them. and about half of that on pci-e 3.0. And that's RAW not compressed. With compression the sky is the limit really.
Click to expand...

Each additional RAIDed drive is 2x latency.
How many PCIe lanes are in a typical Intel CPU?

I guess he learned the hard way why you simply can´t go by raw numbers;-)
C

Lot of tl;dr in this thread.

Consoles being markedly slower than PCs prior to the turn of the millennium never stopped them from being better at action games due to having specialized video hardware.
Reactions: The_Mike

PS5's hardware will not matter for 96% of the games that come out on PC. Multiplatform game developers will probably not spend a lot of extra time to take full advantage of it.

PS5's exclusives that use large scale open world design will benefit the most. Even for exclusives that are sports games, fighting games, racing games, platformers, etc....this probably won't make much of a difference.

It's just such a small number of games where this will matter that I don't think the gaming industry is going to be changed forever because of it. I think it's possible that it will maybe change the way videocard manufacturers approach their future designs, but you are talking several years into the future.

PS5 will still feel bottlenecks, particularly in it's GPU. We are talking about a 9 TF GPU that is supposed to crank out 4K games with Ray Tracing. The I/O solution won't help mitigate much of what is going to be bearing down on the GPU.

I Really think people are over hyping this. Don't get me wrong. I'm excited for PS5, I will be getting one for sure. But the PS5 announcement event wasn't that long ago and people seemed pretty meh after it.
Last edited: Jul 16, 2020
Reactions: ZywyPL and cartman414
You must log in or register to reply here.