Ok, this next thread should take us through Black Friday and Boxing Day unless Nintendo decides to release something else in that time. If you're looking for limited edition items, it's highly recommended you join our Discord server to set up the appropriate notifications. Most of our members have been able to get SNES Classics, Switches, and whatever other item they need with this setup. This thread is still awesome for normal sales and advice from other Canadians.

For those new to this, we share deals and promos on video games in this thread. However, we do sometimes stray off that topic and into other issues that might affect us all -- most commonly internet and wireless deals. Sometimes pillows and McDonalds deals. In any case, it's a pretty casual thread and we're all just here to save some money! You'll see some of the more common promos that we recommend taking advantage of in the first post.

We like to make it a bit easier to find deals so if you are posting a new deal (rather than discussing an old one or wondering about shipping), please post NEW DEAL in highlights at the beginning of your post like this:

If it's a local deal or you're looking for something, try to say what city! In any case, here's the standard first page stuff using graphics I lost the source files for over 2 4 6 years ago:

GameDealsCanada - Run by our very own No_Style, he posts weekly flyer sales. Follow on Twitter.
Flip - Apparently an official trade-in value calculator for Future Shop and Best Buy
RedFlagDeals - The largest Canadian deals website.
CheapAssGamer - The Canadian sub-forum of the largest video game deals forum.
GameDealsCanada Twitter Feed - No_Style puts pretty much everything in this thread into a Twitter feed for you to follow
GameDealsCanada Facebook Page - If you'd rather follow on Facebook, you can Like No_Stye's page
GamesForCanada - See "purchasing us only items" below​

The (Un)Official Canada-GAF Approved method is GamesForCanada. goomba478 of CheapAssGamer runs this website which will help you get just about anything - not just games - from the US to Canada. You use the form on his site to tell him what you want, and he orders it for you then ships it to Canada for a small fee. We have all had great experiences with GFC. He also has a forum.

I'm not sure if goomba's around any more. Anyone have some recommendations?

Shoppers Drug Mart
A store you wouldn't think sells games but does. The deals to be had are using their Shoppers Drug Mart Optimum Program. You can earn and redeem Optimum points for almost everything, which includes games, systems, and accessories, but not pre-paid cards. Normally you only earn 10 points per dollar spent (not including taxes). There are redemption levels that run from 8000 points for $10 to 95000 points for $170 of merchandise (you still have to pay the taxes).

Super Redemption Events
These have redemptions such as 40000 points for $90, 50000 for $125, 80000 for $200, or 95000 for $250 of merchandise.​
Amazon.ca
Pales in comparison to its US brother, but they match most sales and promotions. You can sometimes get lucky with random price drops that will stack with E3 promotions but their shipping is awful. You will not receive your game on Day 1 so if that's important to you don't bother. Prime now offers only 10% off pre-orders.

Best Buy
The only trade-in alternative (chain-wise) to EB. Don't trade in games there. But hey, Reward Zone points, right? They are the other option from Amazon for pre-order deals. E3 and, in 2015, Black Friday offered 30% off all pre-orders. Recently their promos have been significantly worse. You'll get the game Day 1 in most cases if you're in a major city but their order management on the web leaves much to be desired.

The Source
Clearance games can drop to under $5. Website ships to store for free. Their eBay site has decent stuff.

Indigo
Games are exclusive to their website. Free shipping to stores but it's very slow. Sometimes has coupon sales that also apply to consoles.

EB Games
There is no price matching or protection here so be wary of purchasing anything at full price unless you have to. Their trade-in promos in the last year have been solid around console launches. Don't trade in games if there's no promo.

Staples
They sell games on their website, but seem to have abandoned it at the store-level.

Superstore
May find occasional bargain bin steals. No Sales Tax on some weekends makes it a good place to pick up consoles.

E3
During E3, both Amazon and Best Buy usually have pre-order deals on all the games announced at the show. You aren't charged until they ship and can cancel at any time so it's a good idea to pre-order! These range from 30% off to $20 off each title. Check this thread at E3! At this point it's the only time people buy games.

Black Friday
Black Friday and Boxing Day have similar deals and it's usually a chunk off popular games from major publishers in the year. It's not something really worth waiting for.

The main thread that keeps giving back is back!
C

Aw, I was rooting for 10%: Optoutimus Prime.

But that new thread smell, awwwwwww yeah.
B

I wish I had an extra set of hands so I could give that thread title four thumbs down.
T

This is Thread #10 and Year #10 as well so just wanted to say this is my favourite sub-community on GAF. Let's keep this place helpful, drama-free, inclusive, and friendly! Thanks for making this thread something I don't regret checking every day.
Z

Our dollar survives another thread.
B

The Skyrim art book price error seems to be fixed.

Got it just in time.
T

Sealtest said:
Our dollar survives another thread.
Click to expand...

Lets see what happens to the interest rate during this threads reign. Im expecting some bullish raises. Pay off your student loans now kids!
F 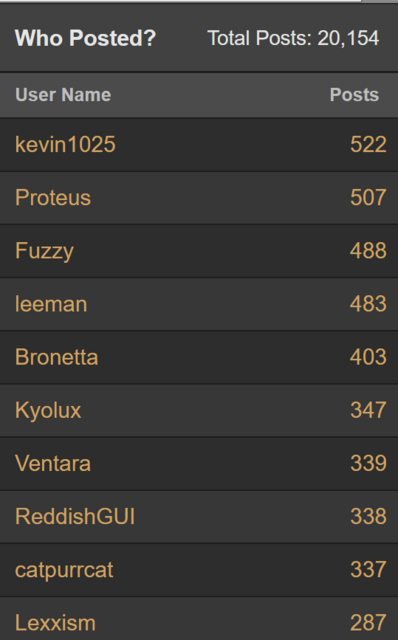 Gentle reminder that you can still buy Younger Now for $10.

Is the SNES Classic back in stock yet?
T

Kieli said:
Is the SNES Classic back in stock yet?
Click to expand...

It was earlier today on BB.ca. It lasted about 10 seconds.
L

We're pretty much back where we started. How appropriate!
Click to expand...

Fuzzy said:
It was earlier today on BB.ca. It lasted about 10 seconds.
Click to expand...

I have 2 coming but I have to wonder how this is remotely possible. Bots?
E

Ain't no one going to punch him in the head. We're Canadian.

It's not the same without him. Hope he's back soon.

How did I make it up there? I feel like I barely posted in the last few months.
C

I got the snes mini yesterday

Vamphuntr said:
I have 2 coming but I have to wonder how this is remotely possible. Bots?
Click to expand...

I managed to grab one! They were up for more than just ten seconds - maybe 30 seconds.
T

Awww, I love that the Tsilon thread is in the OP. What a wild ride that was.

Optoutimus Prime got robbed. Thread title will just cause discord amongst us.
L

It's clever but too complicated.
C

You don't need to be empathetic towards me.

Terrible thread title. Who picks these?
B

Ask me about the moon landing or the temperature at which jet fuel burns. You may be surprised at what you learn.

I have no idea. And that's with me not submitting some of my (most likely) ban worthy replies to some posts.
S

This fuzzy character needs to get a fucking job...!
S

No Stock For Weeks?
E

Will QA for food.

Still here for the sales.
And salt.
D

Yay! Snes classics for everyone.
E

Will QA for food.

As Reggie would say, the title has drastically over delivered.
F

Hey guys, it's totally possible that before the end of this thread, we'll reach price parity with the US right...? right...?

farisr said:
Hey guys, it's totally possible that before the end of this thread, we'll reach price parity with the US right...? right...?

farisr said:
Hey guys, it's totally possible that before the end of this thread, we'll reach price parity with the US right...? right...?

Not only will we reach parity, we'll surpass it and our dollar will be worth $2 USD. We'll have $30 games, Nintendo will have unlimited preorders for their Mini N64 launching next year, and we'll get BB GCU membership. Tsilon will also make a comeback.
A

Tsilon, that's a deep cut. Got Mass Effect 3 free from them.
You must log in or register to reply here.

Sosokrates replied
Feb 20, 2022
Do you view Level Design in Level-Based games in the same lens as Open-World games and if yes/no how do you differentiate between them?
Opinion Cringe Analysis