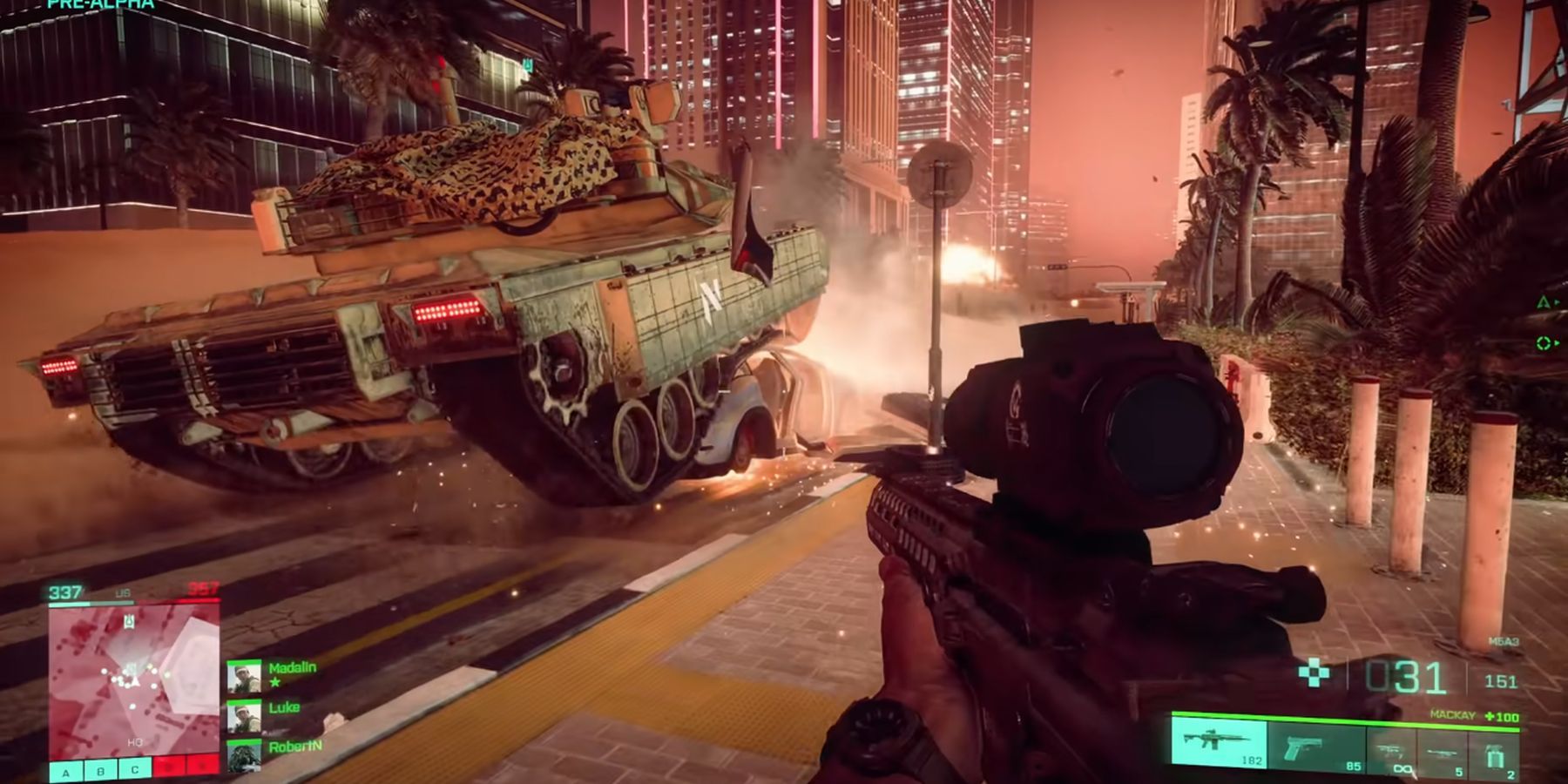 Fans point out a long list of features missing from the Battlefield 2042 beta and express concern for the state of the final game.

A video posted to the unofficial Battlefield 2042 subreddit by user GreenyMyMan shows a large amount of features missing from the new Battlefield game's beta, many of them being iconic to the series. The detail in building destruction is reduced heavily, first-person takedown animations are gone, damage information is removed, and fortification is also missing. Fortification allows players to build blockade structures and defense around turrets, making it a massive downgrade from the previous games' defensive mechanics.

Since Battlefield 2042 is only a beta version at the moment, it is entirely possible that DICE will add many of these mechanics before the final release. However, many players are unimpressed with this first glimpse at the game. The removal of leaning is a top concern in the comments of the video, with many players considering it iconic to the Battlefield series. A common sentiment among commentors is the feeling of being limited by the mechanical changes.

The decision to change the game could be to make it less intimidating for new players, as well as a financial decision; animations that were first-person in previous Battlefield games are changed to third-person in Battlefield 2042's beta, and some commentors believe this could be in service of selling cosmetic skins and melee finishers to players. Some changes are outright confusing, though; large stationary weapons have been removed, which some players have noticed makes taking down aircraft much more difficult. While improvements are already promised for Battlefield 2042's launch, most of them do not seem to address the biggest player concerns.


Let's compare Battlefield 2042 Beta with Battlefield 5 and see which one hase better gameplay features.
I know this is beta build, and be assured I'll prepare updated video once full game arrives. Meanwile, let's check what this Open Beta brought us and compare with previous game in the series.

This beta felt gumpy AF. I am a long time BF fan but this really felt off. Hope they fix the 100% CPU utilization issue or I will have to pass.

Yup. DICE peaked years ago with BFBC2. Every game since has been worse and worse.

Guess we got too excited too quickly and forgetting that this is, at the very core of it, an EA published game developed by their lackey; DICE.

Hoping that all this is fixed, but....I doubt it.

If EA & DICE are good at anything, its somehow finding a way to fuck up a good thing no matter what.

No matter what DICE says, I don't think a lot of these things are features you can add post beta, especially on a marketing build...

YukiOnna said:
No matter what DICE says, I don't think a lot of these things are features you can add post beta, especially on a marketing build...
Click to expand...

Everything on there could be added post release if they wanted to.

MrFunSocks said:
Everything on there could be added post release if they wanted to.
Click to expand...

Ah I was talking launch, but yep post-release for sure. It's why I'm going to wait it out till things are sorted or at least I hope they're willing to.
E

But but but it's a beta.

This is not only a DICE problem unfortunately, a lot of developers don't carry over what they've learned from their previous games into their latest games.

YukiOnna said:
Ah I was talking launch, but yep post-release for sure. It's why I'm going to wait it out till things are sorted or at least I hope they're willing to.
Click to expand...

Yeh launch they'd be able to add some for sure, but definitely not all. Within a few months they could definitely add pretty much all of them.

I'm glad that they don't use takedown animations.
Just let me slice my victims to death without any tedious QTE / animation.

i stopped at online only.

I just watched the video the whole way through and the only thing that I think you could really say was missing was the Leaning mechanic.
The rest of them really just seemed like different design choices like being able to shoot while crawling rather than not or the way the backwards crawl with the legs out in front instead which appears to be an aesthetics change and nothing else.
The last two with the takedown and the medic look virtually identical timewise just having different assets because of the newer year this BF is set in. (Syringe versus Defibrillator)
Score damage feed is definitely one but I thought that kind of stuff killed the immersion of war simulation games. Does the new BF not have fortification whatsoever?
The destruction isn't missing but it is definitely reduced although the comparison wasn't exactly equal, why would they reduce one of the most iconic things BF is known for?
Note I haven't played a BF game since BC2 which I loved. Just seems like the title of the video doesn't really match the content and is over-dramatized.
Last edited: Oct 13, 2021

The whole game feels like its made for mobile and YT/twitch kiddies, thats it. But that right now sums up AAA, boring.
Last edited: Oct 13, 2021
F

Guess we got too excited too quickly and forgetting that this is, at the very core of it, an EA published game developed by their lackey; DICE.

Hoping that all this is fixed, but....I doubt it.

If EA & DICE are good at anything, its somehow finding a way to fuck up a good thing no matter what.
Click to expand...

What makes all these issues especially bad is the fact that they didn't have to worry about developing a campaign. That's why expectations for me were sky high. I'm in the camp that was very disappointed about no campaign. Bf3 3,4, and Bf1 (though less so) had some fun campaigns even if they were not terribly acclaimed. At the very least they were graphical showcases.

Thought this meant they could make the ultimate BF, building off the solid foundation of BF4, but I shoulda known better. I still had fun since this was more solo friendly and that's how I roll but at the end if the day I want a well designed game. This made me want to go back and play bf4, problem is the resolution sucks on ps5.

Anyone know if people still play conquest of Bf4 on ps4/5?

It's still a great game, but I played it since closed beta on PS3, I just can't play it for another whole gen. Fucking Dice, Fucking EA...

Everything after Battlefield 2 was a mistake.

Can anyone tell me why to play this instead of BF4?

For what it's worth, I'm still looking forward to the game, and hoping for the best. Not hyped, but hopeful, lol.

But this kind of thing really doesn't surprise me, especially with the way modern AAA development has been over the past few years.

I remember that one video that compared Gears of War 1 & 2 to I believe 4 or 5? Somehow so many things were cut, missing, or somehow made worse. I think it says a lot about the current state of AAA development. I'm sure there are a ton of examples of this in a variety of IPs, unfortunately.

Hell, while Back 4 Blood is NOT Left 4 Dead 3, it's crazy to experience it and feel like there were things that existed in L4D 1 and/or 2 that were a LOT better.

This is no longer a Battlefield game.
It is but a cheap knock off of Call of Duty, published by EA.
Last edited: Oct 14, 2021

I mean this is a different game isn't it? While I get the frustration I don't think you should expect every game in a long running franchise to have the same features. I'm sure there is stuff in this game that is not in the older ones.

Like I say about people not liking new games or movies, the old ones are still out there to be enjoyed. All that glitters ain't gold and shit.

It's a severly dumbed down version of what Battlefield once was.

Only few people and maps and most of the time its not even full.

All footage is recorded on the PC at a native 4K resolution and max graphics.

A full documentary on the Battlefield series is in production. Planned release is November 12th. It will feature guest appearances from NeebsGaming, LevelCap, Flakfire, theBrokenMachine, Raycevick, and many more!