After a leak revealed Xbox Game Pass Friends & Family branding over the weekend, Microsoft has gone official with its new plan and revealed its pricing in Ireland and Colombia. The new subscription will allow Xbox Game Pass members to share with up to four other friends or family members at €21.99 per month in Ireland, and 49,900 COP in Colombia.

“Currently we are piloting this plan in Colombia and the Republic of Ireland. Future countries / regions might be added in the next months,” says Microsoft in a FAQ. Microsoft hasn’t announced pricing for the rest of Europe, the UK, or the US yet, but it’s likely to be around $25 per month for Xbox Game Pass Friends & Family in the US.

Switching to the plan does mean adjusting the time remaining on your previous plan, and Microsoft will perform a conversion to the Friends & Family plan:
Microsoft currently offers Xbox Game Pass or PC Game Pass for $9.99 per month. Neither subscription includes online multiplayer capabilities, but you can upgrade to Xbox Game Pass Ultimate for $14.99 and this unlocks Game Pass for console, PC, EA Play access, and Xbox Live Gold online multiplayer.
Xbox Game Pass Friends & Family will include all the same Xbox Game Pass Ultimate benefits for four other friends or family members. That’s five people in total, and it also includes access to Xbox Cloud Gaming, Xbox Live, and even the PC Game Pass versions of games.
Click to expand... Why they wouldn't pilot this in the US is anyone's guess but it's been confirmed.

TheVerge believes it will be $25 month when the program reached the US, but considering the Euro is near equal to USD right now, it should be the same $21 a month. In anycase I find it strange they aren't giving us a time table, they claim it will reach other countries in the coming months, not years, so you would think they would have a road map and time frames for each region.

But to be fair, it's probably not that big of a deal, and they do have to make sure checks are in place to prevent abuse so we'll see how that goes. The conversion from your gamepass plan to the friend and family tier in the above chart does look fair and not overly BS, so i'll give Microsoft points for that. Except the top one, I think Gamepass Ultimate should be worth 20 Friends & Family not 18.

~$22 for 5 game pass ultimate accounts is a hell of a fucking deal.
E

The picture of the wife and husband looks funny now that I look at it. Like another man is in front of the screen showing off making the husband shocked, but the wife is ready. Even has her tongue out licking her lips in the pic.

adamsapple said:
If they do a linear conversion from EU to USD, it's $21.8 for this.

~$22 for 5 game pass ultimate accounts is a hell of a fucking deal.
Click to expand...

Will probably be $25. Cant see them going lower than that.

Fucking hell who wouldn't grab this deal with 4 of his friends and all of them pay 30$ after tax combined every month ?????????

Even if I have ZERO interest in the game pass I would still do it. so that I can try and play a few games here and then. that is what ? 6$ a month ???

Is this thingy available only for Game Pass? No Game Pass Ultimate? Bummer

Did you read the text in the image by chance?

As per the article.

"That works out to less than €5 per month per person to share all the usual Xbox Game Pass Ultimate benefits."

I've already got 4 friends and family ready to cut me $60 checks for a year of GPU. This is going to juice their numbers like crazy.

No it's only for GPU.

But dude it's $5 per month if you can get four more friends or family members to join you.
S

Oh I thought it was Game Pass, not GPU, nice

Now all I need is friends

I think when they launch this convert option will be done.

ReBurn said:
Now all I need is friends
Click to expand...

Wonder if the UK merger and aquisition regulators will be wondering if they have just been slammed with a "checkmate".
E

freefornow said:
Wonder if the UK merger and aquisition regulators will be wondering if they have just been slammed with a "checkmate".
Click to expand...

Good deal. Too bad I don't have friends and my family hates me.

/jk, I don't think I would find enough people interested in this though. And I already share a Game Pass sub which works out at about the same price.

Consider me, my family and friends converted.

Allow people to pay their own shares of this plan with their own credit cards, as opposed to making one person pay $300 per year. This would be utterly insane.

Some limitations on how the sharing will work.

- Only people in same country
- You can't leave and join again with a family plan more than 2 times a year
- As account holder, you can have 4 active other members and in total no more than 8 per year. Meaning you can't keep rotating people in and out of the family plan through a year.

Limitations aside, still an awesome deal.

This is going to add a big burning log to the gamepass fire. The value is crazy if shared and split with friends, or even if you have an extended family that you want to pay for.
S

Gotta reel in those subs.

Gaming is such a cheap hobby, what a stroke of luck I chose it over drinking, smoking, drugs and prostitutes.

I really hope this brings in more deals on key sites and not the opposite and kill account deals on third party marketplaces. I've been using alt accounts and playing on my main account for a long long time now with ultimate for like 1-2 dollars for 1-3 months.

I hate managing subs but being so cheap is hard to ignore.

This is insanity. Absolutely incredible deal. Gamepass subscribers about to skyrocket.

I might actually buy a series x meow
If only it could play dolby vision UHD discs
Last edited: Sep 2, 2022
O

Goddamn! This is unquestionably the best deal in gaming

Though for the first time ever, I’ve got to ask how this is sustainable. Because essentially $5 a month for cloud streaming, PC + Console Gamepass ultimate + xbox online play + EA Play sub…
Last edited: Sep 2, 2022

St Phil has done it again.

This is an insane deal! Microsoft are really throwing everything at Gamepass. This, combined with the news that COD will be on GP means millions more people will be picking up an Xbox.

Also, makes me hopeful that Microsoft will dig deeper and cut a deal with all third party publishers to get their games released day one on Ganepass! COME ON MS! I'd pay £70 or more a month for that service!

The best deal in gaming just got better. Nothing comes close to this.

MS are hitting it out the park while it's competitors are increasing entry costs and charging £70 for shitty remasters.
Last edited: Sep 2, 2022
W

If you think that GP is already the best deal in gaming history they come up with this. Incredible.
Last edited: Sep 2, 2022
J

Game pass prices are actually going down with this plan. For 60 dollars a year. You can play all these games coming in the next year. 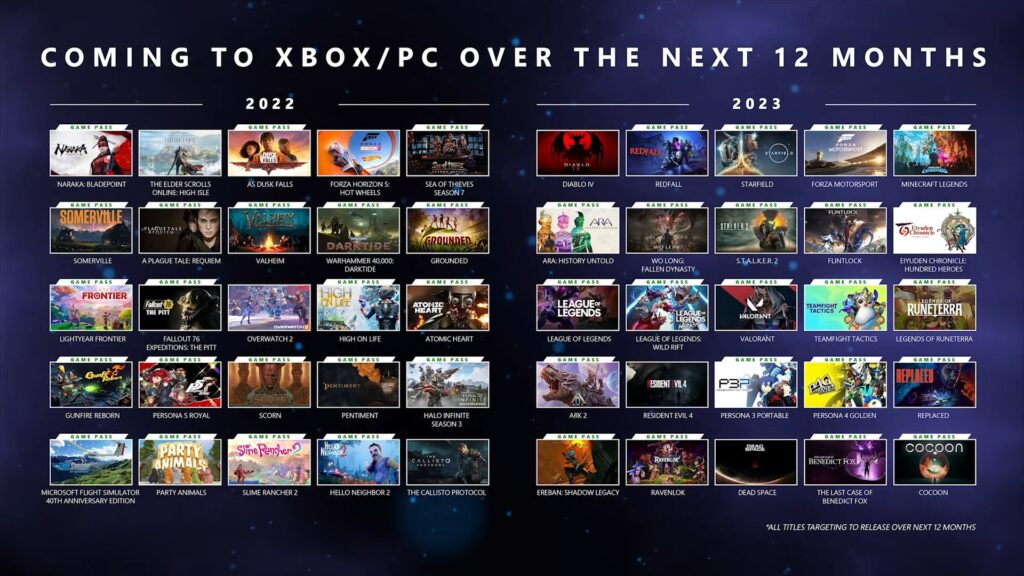 adamsapple said:
If they do a linear conversion from EU to USD, it's $21.8 for this.

~$22 for 5 game pass ultimate accounts is a hell of a fucking deal.
Click to expand...

Cheaper if you buy a year at a time
J

Wohc said:
If you think that GP is already the beast deal in gaming history they come up with this. Incredible.
Click to expand...

Yep game pass is gonna further change the industry. It already has. Microsoft and Xbox continue to do everything right.
W

Jimmyisback said:
Yep game pass is gonna further change the industry. It already has. Microsoft and Xbox continue to do everything right.
Click to expand...

Everything? You must have missed 8 pages full of super disappointed Halo Infinite offline splitscreen coop fans!

That’s why I don’t think GP / GPU prices will increase any time soon, MS wants a cheap way for people to get into the ecosystem. Once you’re in, you’ll spend money one way or another.

If it goes live in most regions by BF / Christmas coupled with some deals this is going to move units.

They are gonna cry then when they find out halo infinite will continue to grow over time anyways. Halo has been "daaaaad" for so long and yet continues onward.

The money they must make from MTX on Gamepass must be huge. No wonder EA was so desperate to get EAPlay onto Gamepass.
J

Ubisoft plus needs to get in on this train..hey Ubi... We're waaaaaiting.
C

Ozriel said:
Goddamn! This is unquestionably the best deal in gaming

Though for the first time ever, I’ve got to ask how this is sustainable.
Click to expand...

It draws people in to their ecosystem where they get 30% of third party purchases that might have otherwise gone to Sony/Nintendo, and they don't include dlc/expansions like forza 5s hot wheels.

Yeah, MS is making GP a behemoth. 2023 will be intredasting.
You must log in or register to reply here.