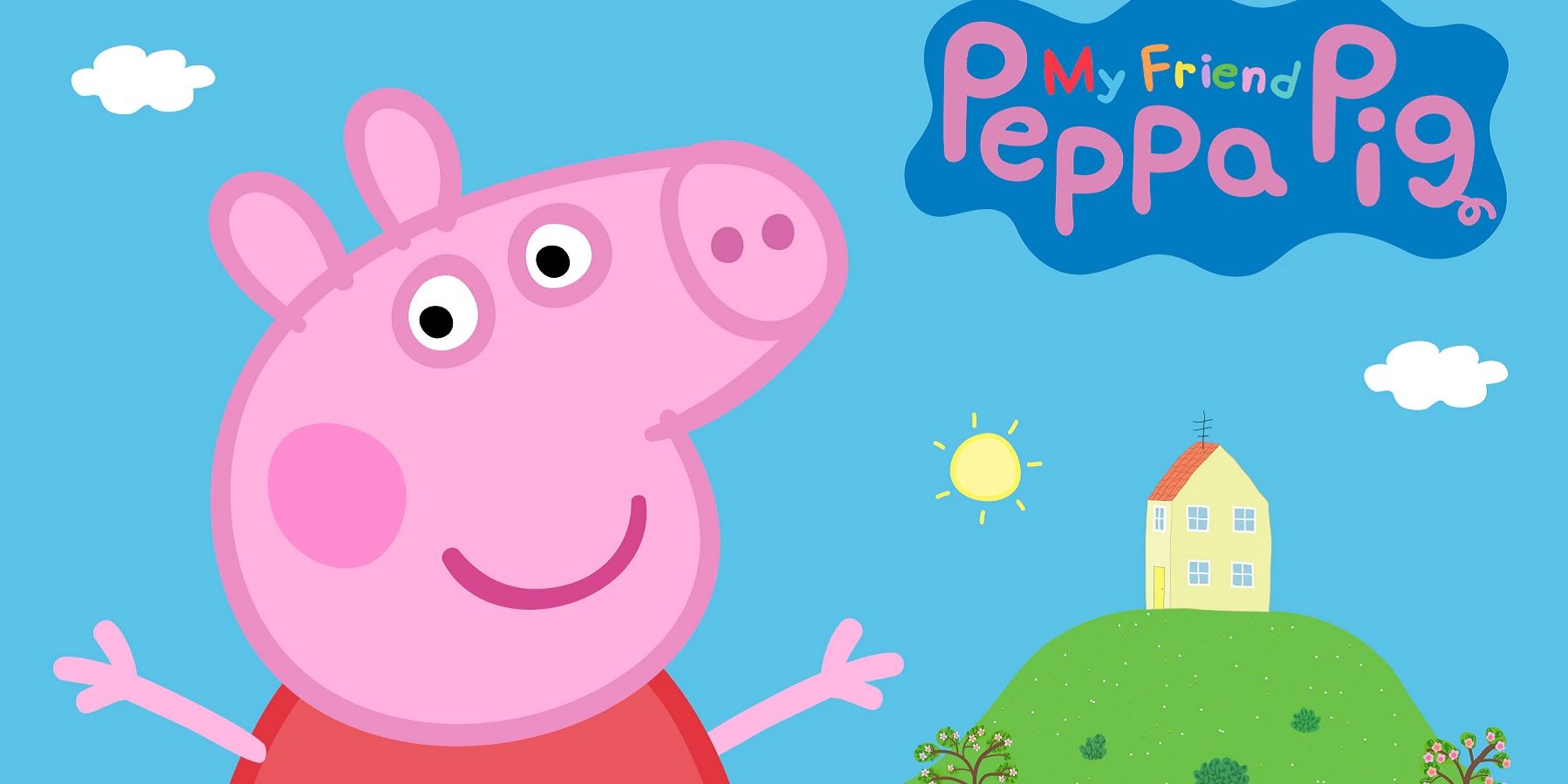 The recently released My Friend Peppa Pig video game, based on the children's cartoon, has higher user scores than the year's biggest releases.

Now, there are some things to keep in mind with this. While some may find it amusing that massive blockbuster games are losing out to My Friend Peppa Pig, it doesn't mean that the user review scores are necessarily serious. In fact, looking at the My Friend Peppa Pig user reviews, it seems pretty clear that many people rating it so high did so as a joke.

There's also likely a lot of user reviews for the other three games that were written by people who didn't play them, but want to get in on lowering their scores. That's not to say that there isn't legitimate criticism for Battlefield 2042, Call of Duty: Vanguard, or Grand Theft Auto Trilogy. On the contrary, Grand Theft Auto Trilogy is in such a bad state that Rockstar Games had to apologize for it, while Battlefield 2042 has been flooded with negative user reviews across multiple platforms. But it's still likely that the games received 0/10 ratings from people who didn't actually play them, as that's just the nature of user scores. 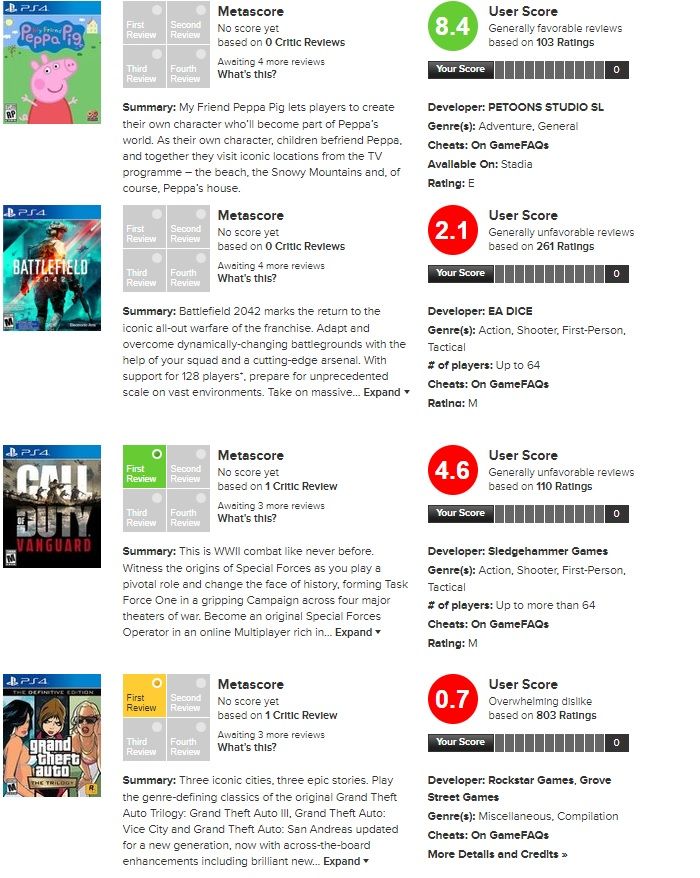 But not better than the house in fata morgana

It's our time to shine, Peppa.

Am I alone in thinking, for a children's game, Peppa Pig actually looks pretty cool? It is basically a playable version of the cartoon show - something I could only dream of having as a kid.

It reminds me of the South Park games in that way (judging from trailers, as I haven't actually played Peppa Pig).
Last edited: Nov 22, 2021

I warned people against battlefield. Anybody who brought it and is refunding might as well play Peppa Pig for change of pace.

I was so ready to make a Year of the Pig joke, but the game’s a couple years late (or is it 10 years in advance?).

Caring about those scores is a waste of time.

Praise and love for Peppa!

In Battlefield and GTA is really deserved.
Both games are unfinished mess.
Last edited: Nov 22, 2021 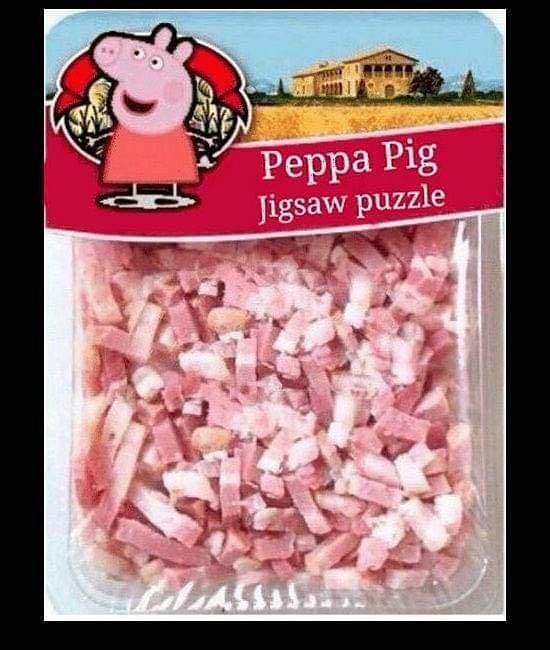 ive played games i loved that had shit reviews

bender said:
It's our time to shine, Peppa.

GTA trilogy can only dream of having cycling this smooth

No surprise here, if there is something that americans love more than guns, its probably bacon.
Last edited: Nov 22, 2021

Did you enjoy any of the games? Played them maybe? Or it's the battle of floating point numbers that matters?

We need some big, all encompassing war, so people could finally realize wtf is worth in their fucked up, ridiculous life.

Of course the armchair monkeys will be first in line, chained together, used as a battering ram.

My 20 month old doesn't like it at all. There's barely any interactivity or gameplay. It's like a kids version of Gone Home. Meanwhile, the bambino will happily mash on the rumble triggers and do donuts in Forza until the cows come home.

Of course. Peppa Pig is based

That's what happens when your game is ass cheeks.

Nah, Trotro and T'choupi is where the fun is.

The game looks very well made, of course kids are going to enjoy it.
Last edited: Nov 22, 2021

Well...my nieces have Peppa Pig game and I played it with them for a little bit. It oddly is a pretty good game and it captures the show pretty well.
Last edited: Nov 22, 2021

Time to review bomb the shit out of it.

Because is a better game.
T

You should never underestimate Peppa Pig

Horses for courses. What the game sets out to do it actually does really very well. Wish the voices were the proper ones but aside from that - my kiddo has played this relentlessly since it came out. Score checks out.

And yet peppa pig is a load of shite.

Loving my 4 day vanguard trial. Loved my 10 hour battlefield trial and loved what I seen when my friend share played gta 3 for a few hours.

ethomaz said:
In Battlefield and GTA is really deserved.
Both games are unfinished mess.
Click to expand... 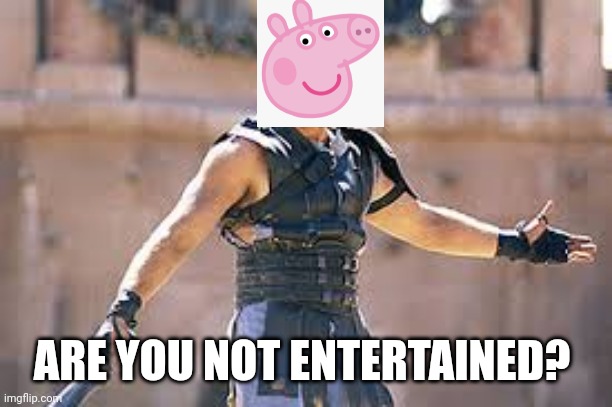 i mean, yeah reviews can be helpful. im not as against them as im making it seem. but people use them to say "see its got a good review so that means its good" and at the end of the day, all that matters is what you think about it.

so sure if youre not sure about a game/movie/show, and you see it gets bad reviews, then its probably best to skip it, that way dont waste your time and money. of course, that makes sense.

and netflix's cowboy bebop was in fact pretty bad so fair enough lol
Last edited: Nov 22, 2021
You must log in or register to reply here.