You are using an out of date browser. It may not display this or other websites correctly.
You should upgrade or use an alternative browser.
L

This is a discussion and news thread for all things Oculus Connect 4.

Oculus Connect 4 is basically the e3/gamecom for Oculus. With a keynote from Oculus to kickstart the event, expect tons of new announcements (games and even hardware) that will come out over the next 12 months. Following the keynote, the 2 day event is packed with talks from engineers, devs and creatives from the VR industry.

Why should I pay attention?
Multiplatform VR games are also announced in this event too so it may be of interest to psvr owners too. However, if you own PC vr headset that isn't oculus, all the games announced for Oculus will be playable on headsets like Vive (just like how oculus rift owners can play steam vr games).

Like previous years the keynote should be livestreamed to Oculus twitch and facebook. Individual talks from devs may be livestreamed by the devs themselves so its worth keeping an eye on their twitter (if oculus don't livestream it for them).

I'll add more links in as others post them in this thread These can be livestreams and also liveblogs too. 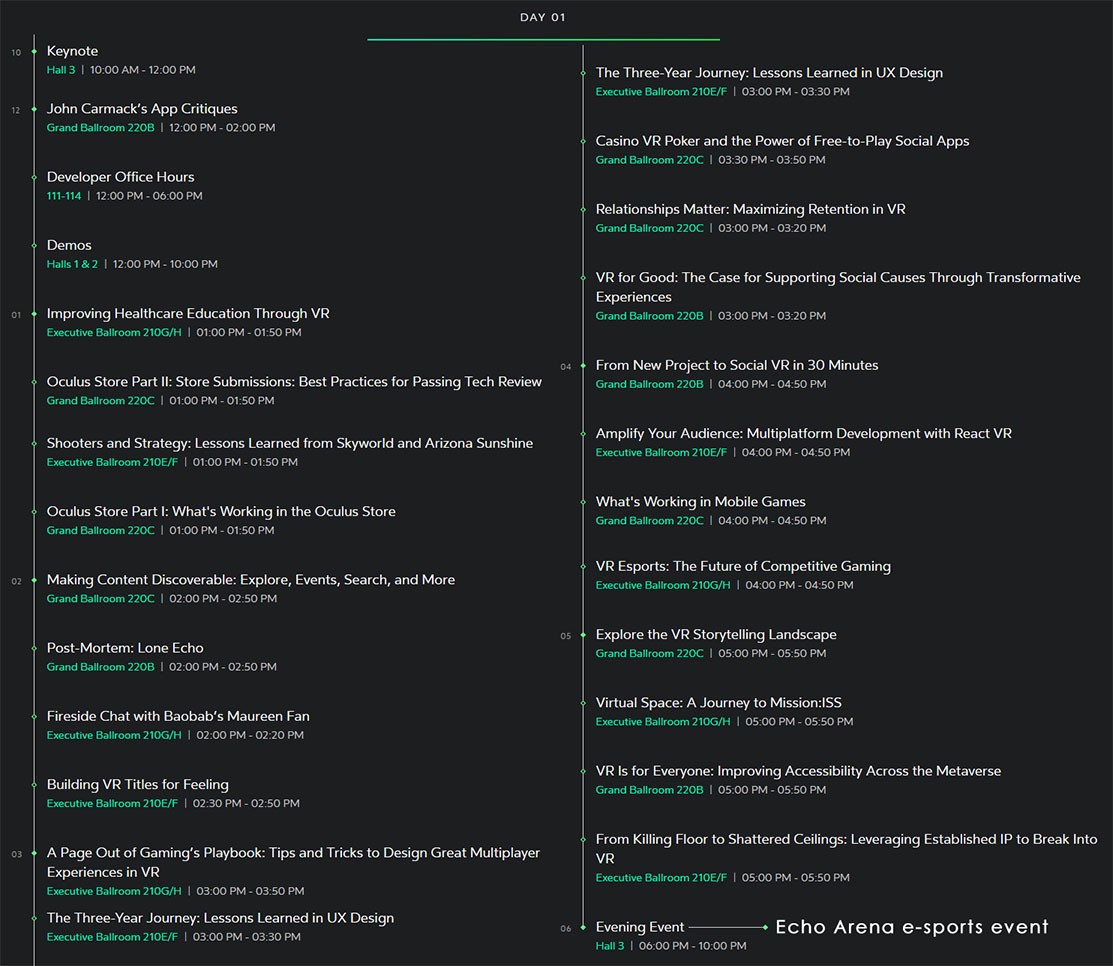 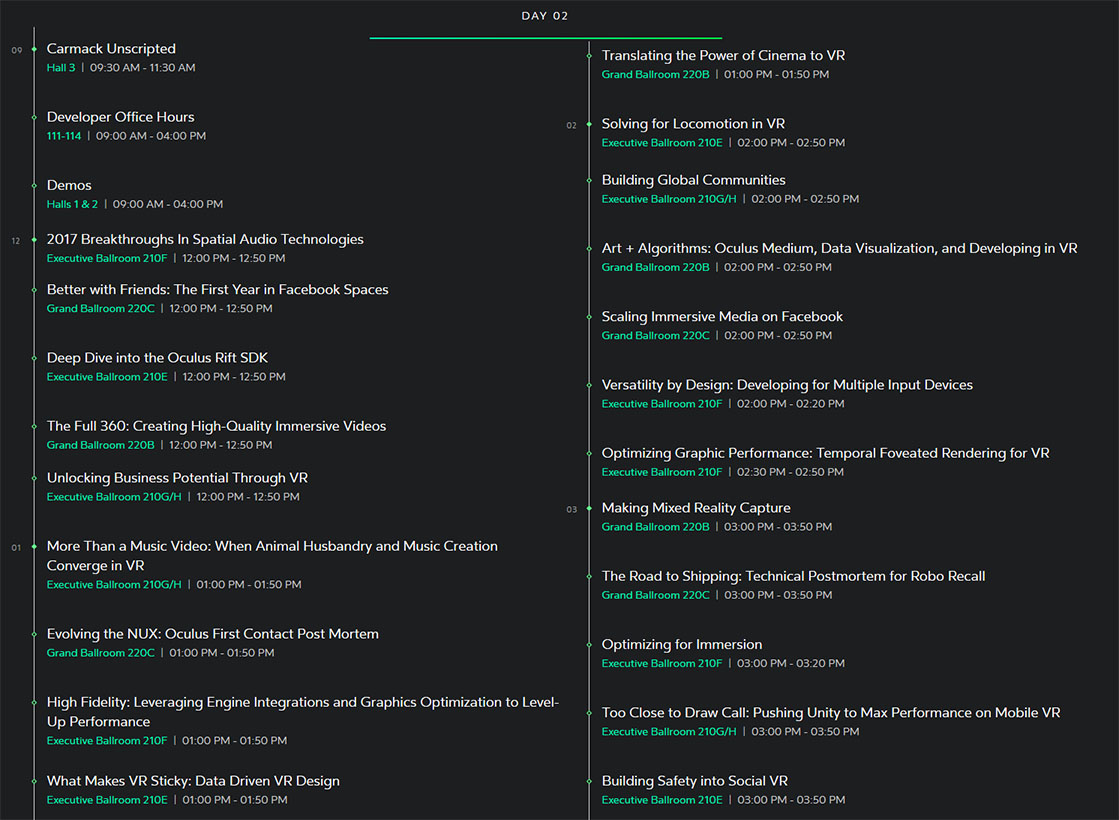 The official site has more info on each event scheduled above: https://www.oculusconnect.com/schedule

What was announced at last years Oculus Connect:

Nice thread Lakuza. There's some speculation we might get some more new rendering tech.

Iribe tweeted some hype last week, and a redditor posted some observations on one of the session descriptions:

Well, the description of the Day 2 session at OC4 called "Deep Dive Into the Oculus Rift SDK" says:

The Rift SDK has just introduced a number of new powerful features for advanced VR rendering and composition. Well discuss each of these and what you need to know to use them.

They recently introduced the new near-field HRTF audio system, but that's not "rendering and composition."

So I'd expect some announcements that are similar to ASW.

IMO, having two topics from two different third-party companies implies that this won't be one of the integrated SDK features we'll hear about.
Click to expand...

vermadas said:
Nice thread Lakuza. There's some speculation we might get some more new rendering tech.

Iribe tweeted some hype last week, and a redditor posted some observations on one of the session descriptions:
Click to expand...

Will add this to the op in the how to watch list, thanks

Hoping to see some new announcement.

And Google announces their own standalone headsets, so perhaps we should get some new updates regarding Santa Cruz or any standalone VR headset plan

lots of developers are flying there now

Subbed. Thanks for this thread!
A

Most interested in Carmack, foveated rendering, locomotion and especially UX design since I just applied for my masters in HCI.
B

Will definitely be watching the Keynote. Should be a refreshing year for them not having to bring Luckey onto stage ever again.

Oculus Content showcase for OC4. Games like The Killing Floor Incursion, The Well, Echo Arena etc will be there
L

We should hopefully get a much better look at some generation 2 devices today which is exciting, both PC and mobile standalone. Carmack's been pretty quiet the past few years too beyond incremental updates so hopefully we get to learn more about what he's been working on.
P

I'm more interested in what they show of the software than the hardware. I think it's too early for gen 2 just yet they should save that for a big leap in the technology. It's hard enough persuading people to buy the headsets at the price they are now without people thinking they should avoid buying them because the new one will be out soon.

I've been really impressed with most of the games Oculus have published this year and they've been released steadily enough so there always seems to be something new out each month that's worth playing. I hope they continue that next year as well, I know they have that Marvel game slated for early next year but beyond that they've been a bit quiet on anything else.
C

Hey, thanks for the reminder. Gonna check this out as my first event in VR.
V

Can I have non-taxing supersampling pls?
A

I forgot this starts tonight. Looking forward to it.
V

Non-hardware related stuff that I'm hoping to see:
- Cylindrical Timewarp Layers in the PC SDK.
- OVRDrop equivalent
- A standard format for 360 photos with 6DOF. FB showed off 360 camera tech earlier this year that would be able to create a limited depth map that would allow some positional tracking inside of what is normally static spherical imagery. Awesome if this could apply to video as well.
D

Hoping for a "hint" of a next gen HMD.
W

Well I guess going from a crypto-fascist to an emotionless android man as spokesperson is a bit of an improvement.
L

just under half an hour left for the keynote to start.
Anyone watching it in vr?
I'm tempted but might stick to normal streams so I can keep an eye on this thread.
S

can confirm that the first official Marvel VR experience will be demoed. source: the kiosk behind a few curtains in OC4 press room.
W

Very curious about their inside-out-tracking / standalone VR headset and the current state.
With Palmer now long gone I think there will be more positive buzz and less reservations.
L

samred said:
can confirm that the first official Marvel VR experience will be demoed. source: the kiosk behind a few curtains in OC4 press room.
Click to expand...

Nice I think the inhumans characters (tv show version) were the previous announcments which made me laugh, hopefully they choose better ones to announce today
S

Lakuza said:
just under half an hour left for the keynote to start.
Anyone watching it in vr?
I'm tempted but might stick to normal streams so I can keep an eye on this thread.
Click to expand...

I'm going to watch in VR

Unfortunately I can't see this thread taking off, VR still isn't a big deal on GAF it seems
K

Is this goober gonna take us on his VR disaster tour now?
B

Excited to see where this goes.

It seems like it's time for a new headset announcement.
S

Mine just says check back soon
Click to expand...

I checked mine too 5 mins ago and got the same. try relaunching the app to see if it connects.
S

working now but buffers constantly and quality is awful
W

so is this standalone oculus going to be a gaming device like the Rift?
L


stoke1863 said:
so is this standalone oculus going to be a gaming device like the Rift?
Click to expand...

Its meant to be somewhere between gear vr and oculus rift.
T

The tracking looks good going by that video?

Like looking up and having the controllers down at your waist still track? Man, I hope that's reliable.
W

The $199 Oculus Go (Spring 2017) obviously doesn't have inside-out tracking. The Santa Cruz devkits shipping next year to devs is the full package that we want.
L

stoke1863 said:
so is this standalone oculus going to be a gaming device like the Rift?
Click to expand...

Looks like Santa Cruz is separate from Go. Go looks like a stand-alone Gear VR without requiring a phone.
L

You should have virtually arrived earlier. It's like those lines in Playstation Home.
P

So would Santa Cruz be the first official second-gen VR headset to hit the market? Been waiting for inside-out tracking.
L

thanks for clarifying the santa cruz project, will update op to mention that.
S

Subbed for this one. I have a PSVR and a Rift and I have been using my Rift with Tridef playing games like Witchern3 in 3D. It is FricKen ridiculous and fun. Has anyone else used TriDef?
B

Really interested in the Go. Curious to hear impressions.
K

Tajaz2426 said:
Subbed for this one. I have a PSVR and a Rift and I have been using my Rift with Tridef playing games like Witchern3 in 3D. It is FricKen ridiculous and fun. Has anyone else used TriDef?
Click to expand...

ok your going to have to explain this to me...
WItcher 3 is my fav game ever.
S

The go seems to have a lot of updated tech for the price.
W

Still going with that strap design... I thought we all saw the light with the crown.
C

This is some insane tech for $199, wow
You must log in or register to reply here.

Dec 22, 2020 started IbizaPocholo
Dec 25, 2020
Wonko_C
Facebook will now use Oculus VR data for ads, contradicting previous commitments that they wouldn't do this