Assassin's Creed Odyssey is one of the best games of Ubisoft's lifetime and continues the historical theme from Assassin's Creed Origins and what this means is they went away from the original concept of Assassins Creed and instead introduced an historical open world franchise (I place Origins as my game of the year 2017) and it's now a game of the year contender and not your typically scheduled Assassins Creed game so it was decent than and sensational now.

The game is set up in Ancient Greece 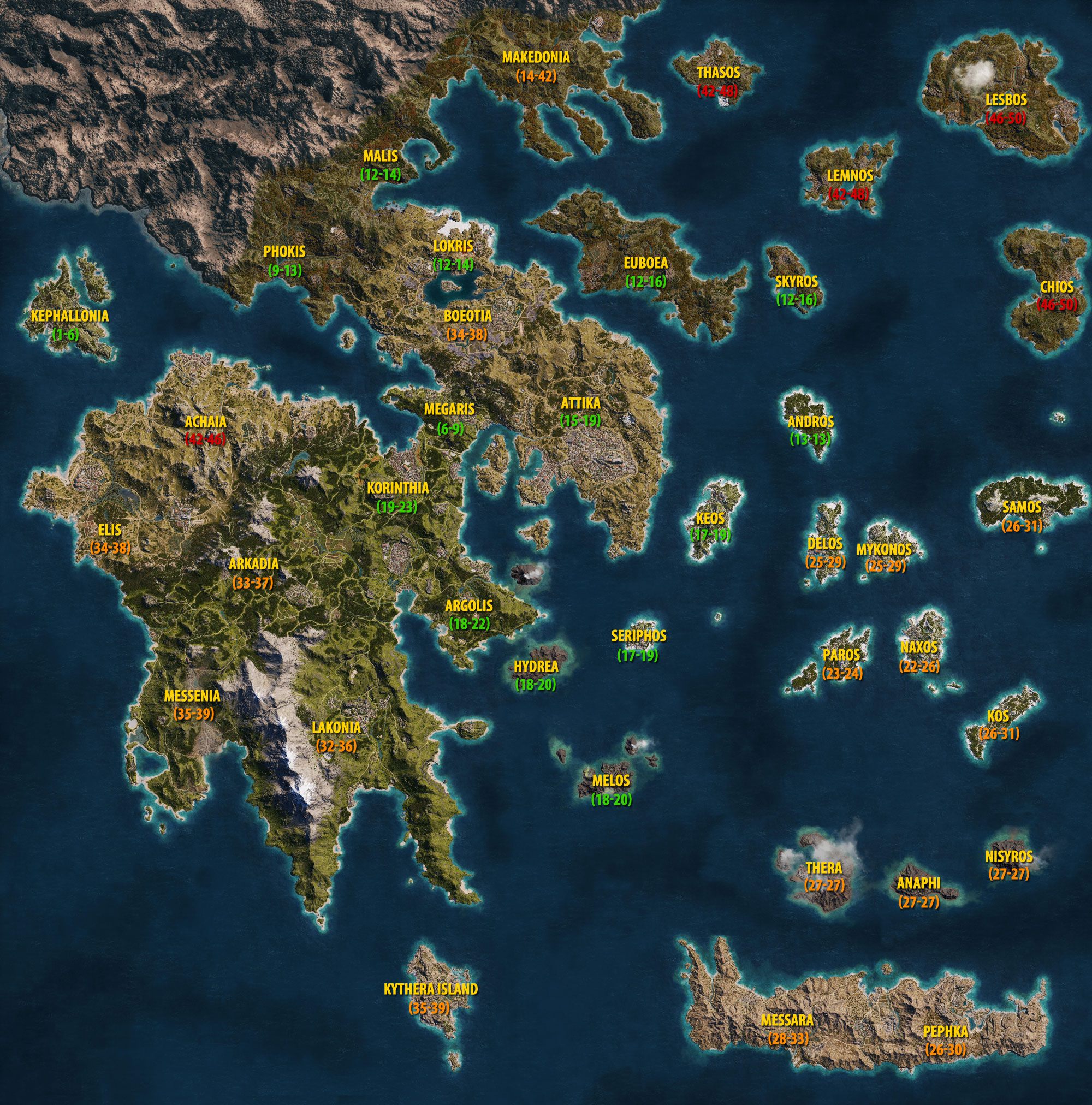 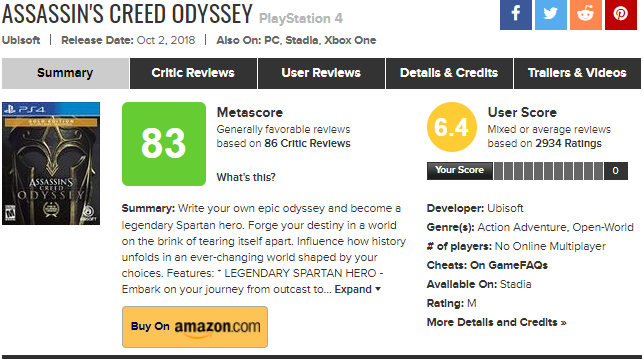 Anywhere between 79-100 is considered successful.


I completed the game in 60 hours and still had a lot more side quests, main quests etc. to do

Although the game isn't traditional Assassins Creed it picks up early Alexios (Kassandra pictured above) are set out to avenge their family, defeat a cult and discover new lands.
The gameplay is so effortless, unbelievable. The game comes down to powering up your character, making it possible to beat bosses and sort of emerge as a champion, by 20-30 hours in you're loaded and the game starts to feel a whole lot easier and you can take advantage of sort of RPG-like elements that allow you to pound away at enemies.

A little bit of RPG to it

You're going to get wiped out of playtime with this game, I don't know people's schedules enough but I'm not sure 1 hour to 2 hour game times fit this game, you're gonna want to put some heat on this game, and that takes 4 to 8 hours out of you. The game tries to take the focus out of you, overwhelm you and that can happen to you, it's a HUGE bombshell, distraction of a game, you're trying to recruit people to your ship, every location you're being distracted by mounting side quests that you love and feel for and this is ok because the more you invest in the game, the more the game becomes ok.

Game just feels right to me and I think it's better than an 83.

Definitely my favorite of the three Anvil games, loved the loot and Alexios was cool.

I loved Origins. Probably the best AC game there is. I jumped into Odyssey hoping for more of the same and found it to be meandering even for an AC game and I could not get in to it at all. The bounty system was ass and the combat was worse. The world just felt too big with too many completely pointless little camps or collectables that didnt do anything but waste your time.

I totally agree with you that this is a time sink game. I think I put 20 hours into it before calling it quits and it really did seem like I was just scratching the surface which was even more defeating for me considering I did not enjoy that 20 hours.
Last edited: Jan 12, 2021

I loved a lot of the game. Especially the DLC. The sailing is top notch in the game and you do a lot of it. Story is a lot of fun. Other cool parts are the historical recreations. Going to Athens and Sparta were highlights for me. I also loved the Olympics, even if we didn't get naked like the Greeks did. Delphi was also great, having been there in real life to walk up a remade version of a city I walked up the ruins of.

I was most disappointed by the temple to Athena on the acropolis. They didn't paint the marble figures like they were painted in ancient Greece. A small oversight, but I wanted to see it.

If the game was like 40 hours shorter I would of liked it a lot more. Theres a fantastic game in Odyssey, maybe even the best, but it is crazy bloated.

I know some people didnt like the direction the skill tree went but I actually thought it was pretty refreshing.

I literally just finished this myself as well. Very impressed, though I fully understand the points about 'too much to do'. I won't call that a negative, as if you want to do it you can and if not don't, but there is definitely a paralysis that can set in when you're trying to decide what to do.

The world is so incredible to explore, the visuals and draw distance are stunning (loved being up on cliffs at dusk and seeing the flames lit miles away in small towns and cities), and the game truly captures the grandeur of an epic quest unlike many others.

My biggest complaints were that the story ran a little thin, definitely going off the rails a bit and some of the reveals about Alexios/Kassandra's lineage was a bit meh for me. I also really wish the objectives of all the camps and small areas were more diverse, there are just so many of them you easily get tired of it all long before you even get to Sparta.

Nevertheless I loved this game, and while I'm going to take a long break before I tackle it, I'm very much looking forward to Valhalla.
T

Is the version with all the dlc worth getting? Has it ever gotten the same discount level?
B

Its the best adventure game . Im playing it like watching a long TV show .Sail to new island , met new people , fix their shit , sail into the sunset at the end of the episode.

Trogdor1123 said:
Is the version with all the dlc worth getting? Has it ever gotten the same discount level?
Click to expand...

Haven’t finished the Atlantis DLC but it’s a big new map, or multiple maps I think, I’m only in Elysium. Looks very different from the starter map. Looks fantastic after the new 60fps patch! 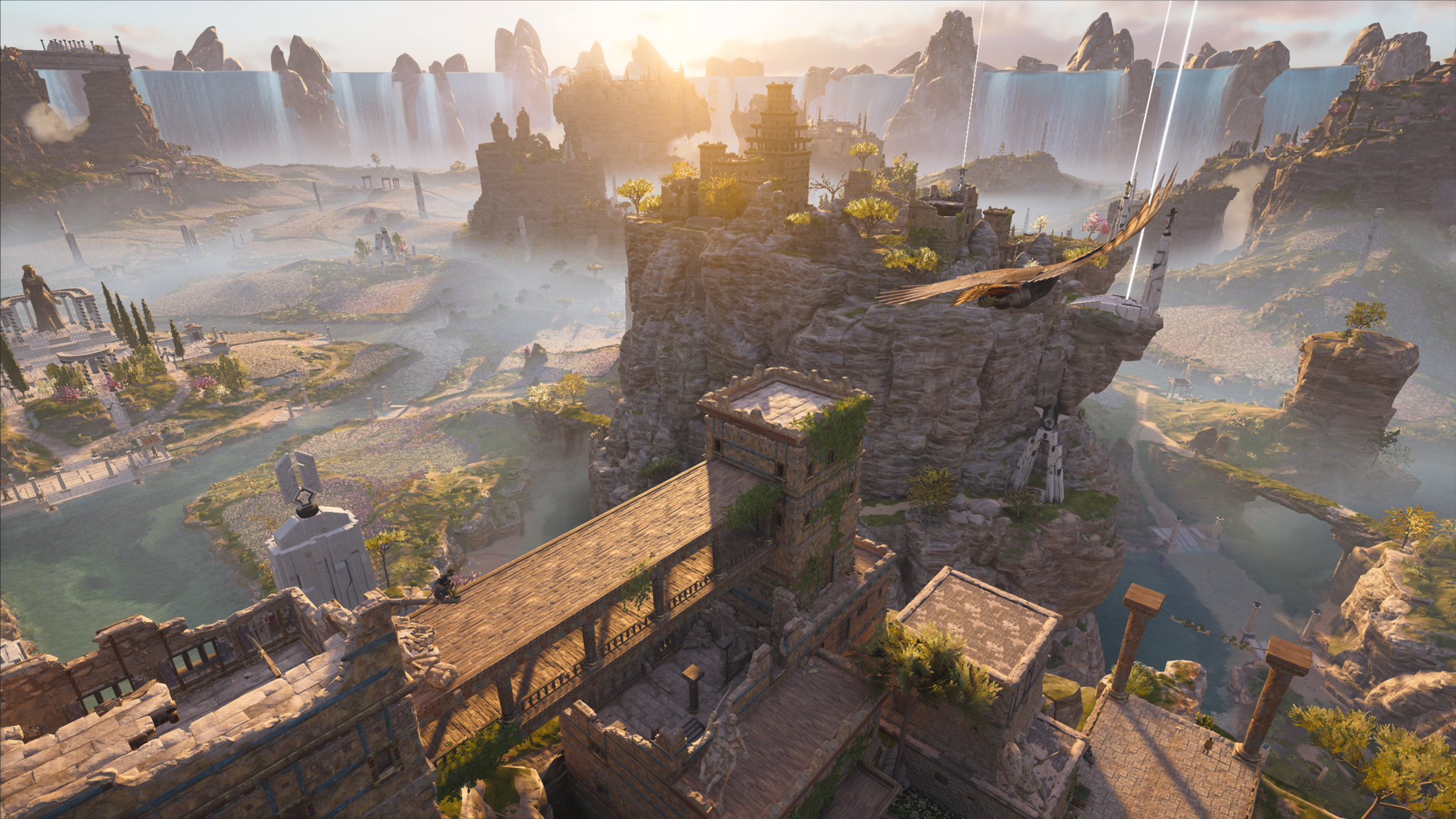 I can't explain to myself why I enjoyed this game much more than ghost of tsushima. Despite got being objectively the better game I haven't even bothered to finish it.

This was my favorite AC. I still haven't gone back and done Atlantis because it wasn't out yet when I completed it, but this game ate my life for a while.

I had a huge empty feeling for a week or 2 after I finished it, because everything I played just didn't have that same oomph to it.

I wish I could go back and replay it again for the 1st time.

One of the worst AC's ever.
You must log in or register to reply here.