Feel Like I'm On 42 said:
You have spoken the truth. Although I think once people realize we're in a similar situation to last gen with underpowered hardware, we could see mid gen refreshes happening again.
Click to expand...

I don't think we are in the same situation. last gen consoles were pure dogshit even the day they released the GPU was 2 years outdated and the CPU was a fucking joke.
Jaguar CPU cores are so bad that you couldn't even really run Windows with such a CPU. it's like using windows on one of those super cheap tiny Net-Books

the reason the Xbox One and PS4 can still run modern games is because developers bend over backwards in order to tailor their games and engines to run on their shitty hardware, because ultimately that's where the money is... the console versions.

this is also why we had this era in PC gaming with people playing new games at 200+fps on relatively normal PC hardware in the first place.
Last edited: Feb 4, 2022

Last gen versions look very low Res. Also at least three shots have vegetation missing on PlayStation consoles in this video, they talk about one but you can see it in other scenes also, odd bushes missing.
Click to expand...

Base PS4 to Pro seems like a massive difference in IQ looking at the tree, the sign on the left, roof textures etc. 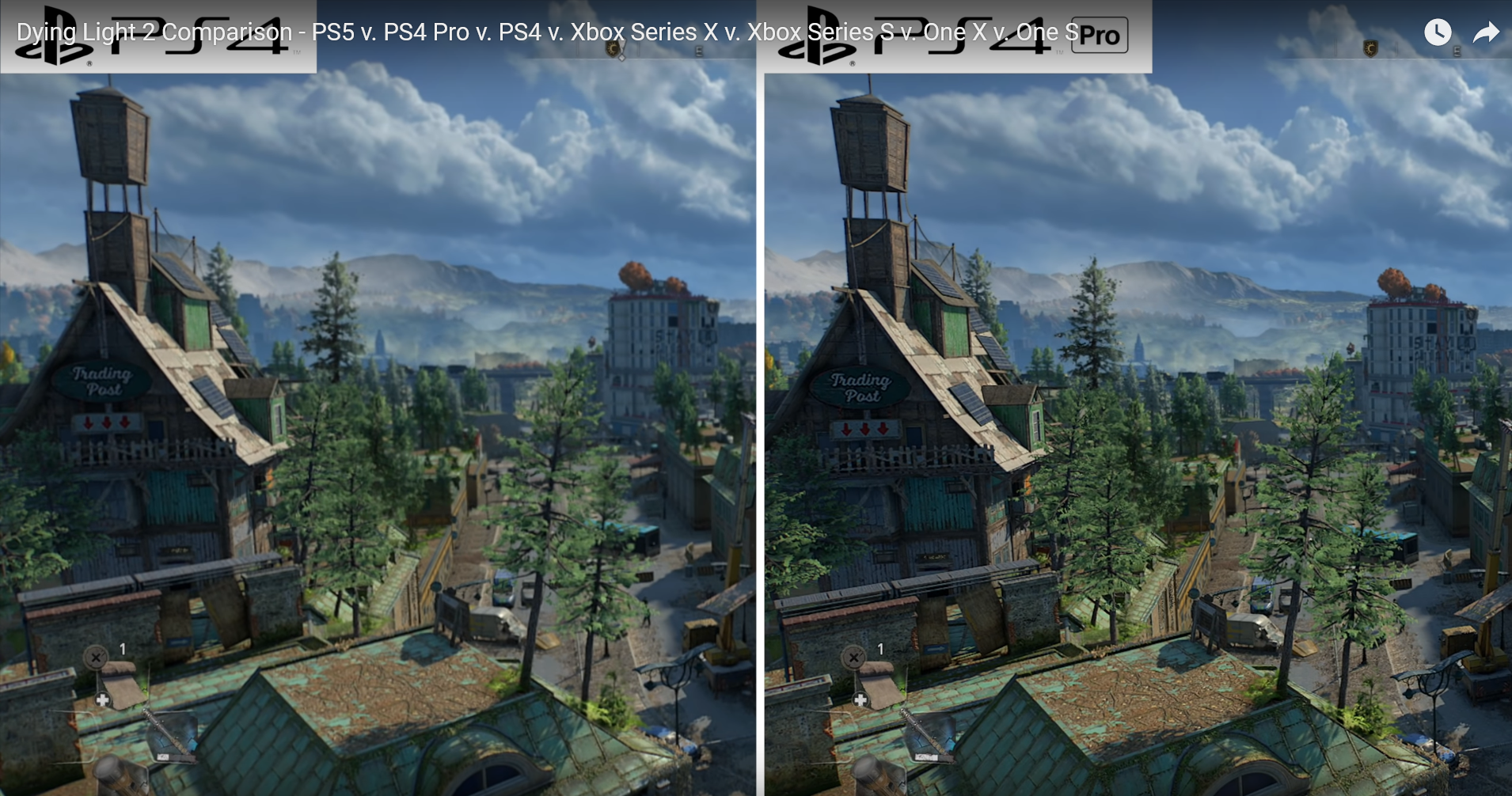 01011001 said:
while that can make a difference, I think seeing that the Series S loads way faster than the PS5 is pretty solid evidence that suggests that the PS5 version is more compressed, which results in longer loading because the CPU has to do all the decompression
Click to expand...

Yeah there is no doubt something has gone wrong, rather than more compressed - id just say that maybe they used a codec that doesn't support the PS5 hardware decoding so its CPU bound. Sometimes I think dev's just main the pc version and do as little port work as possible.

I used to work for a company that did game compression so what there doing this gen interests me but they release so little info and there's so many variables its difficult to make out what's going on.

"According to Techland, Dying Light 2 on PS5 is only 25GB whereas the PS4 version is 51GB, Xbox comes in at 35GB and PC is at 43GB. This makes the PS5 version the smallest of the lot." - assuming this is correct

I think the only games that use the PS5 best (Kraken/oodle) compression are probably the ones that show sections loading in low single digit seconds, if this does use the impressive PS5 codecs then god knows how they have screwed it up with the PS5 having native hardware support

VFXVeteran said:
Yours like many other gamers on these boards have too high expectations of console hardware. These graphics engines don't get rewritten just because it's a new generation of hardware. The low bandwidth of these consoles will absolutely restrict it from having both settings (4k/60FPS). I told people early on last year that this is about as good as it's going to get for this entire generation. Also, I wouldn't expect any mid-gen hardware that's going to modify the hardware profile of these consoles. Last-gen was an exeception to the rule. Mid-gen refreshes were never intended to happen "from now on". It was only introduced last gen because the hardware was severely underpowered to last 7yrs.

In short, stick with a PC for the best results for speed, resolution and featureset.
Click to expand...

You continue to talk absolute tripe. This happens every generation. PC gamers laugh at “weak” console hardware (which funny as the most popular GPU on Steam performs on the level of a launch PS4) lol. There will be a ginormous leap in visuals of current gen only games over early / cross gen games. The Matrix demo already shows what’s possible and it was developed in under a year with a small team. GTAVI will put that demo to shame.
You must log in or register to reply here.