At a glance
- Game sales down 10%, consoles down 20% and accessories down 7% vs September 2021
- EA's final FIFA 23 enjoys launch sales that are 6% higher than FIFA 22
- Console sales significantly up over August, led by Nintendo Switch

14.4 million digital and physical video games were sold across Europe during September, according to the latest figures from GSD.
That's down 10% over the year before. 8.57 million sales were via digital download stores (down 13.8% compared with September 2021), and 5.82 million were via physical retailers (down 3.7%).
The biggest game of the month, by a very large margin, was FIFA 23. EA's final FIFA game finished its run in style, with sales up 6% compared with the launch of FIFA 22. The nearest competitior to FIFA is another sports game: NBA 2K23. The typically US-centric sport continues to grow in popularity in Europe, with sales up 10.5% compared with last year's version.

The third biggest-selling game in the charts is Splatoon 3 from Nintendo. The game will likely have charted at No.2, however, Nintendo does not share digital download figures with the charts, so it has to settle with third place. Rounding off the new releases is The Last of Us: Part 1 at No.5.

394,000 across tracked European markets last month (full list at the bottom of the article. Germany, and UK not included. UK data is available through here).
It's a 20% drop over September 2021, but over 29% up compared with August.
The Switch was the best-selling console across tracked European markets last month, with sales up over 11% compared with August, boosted by the release of Splatoon 3.
But it was a strong month for all three main platforms. PS5 sales are up 28%, while the biggest riser was the Xbox Series consoles, with sales almost double that in August.

Elsewhere, 1.44 million accessories were sold across tracked GSD markets, a drop of 7% over September 2021, but 22% up over August.
Once again the PS5 DualSense controller leads the market, with the PS4 DualSense pad in second place. The highest charting non-controller is the PS5 Pulse 3D headset at No.5.

I like shitting on FIFA (rightfully so I might add) but this game is the best they've released since the switch to next gen gameplay wise. Not that the bar is too high but i'm having fun.
R 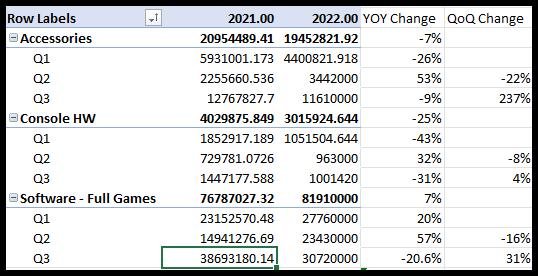 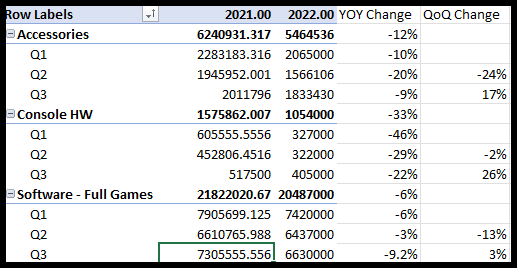 Yeah, going to see some interesting numbers in the next couple of weeks.
Last edited: Oct 20, 2022
You must log in or register to reply here.