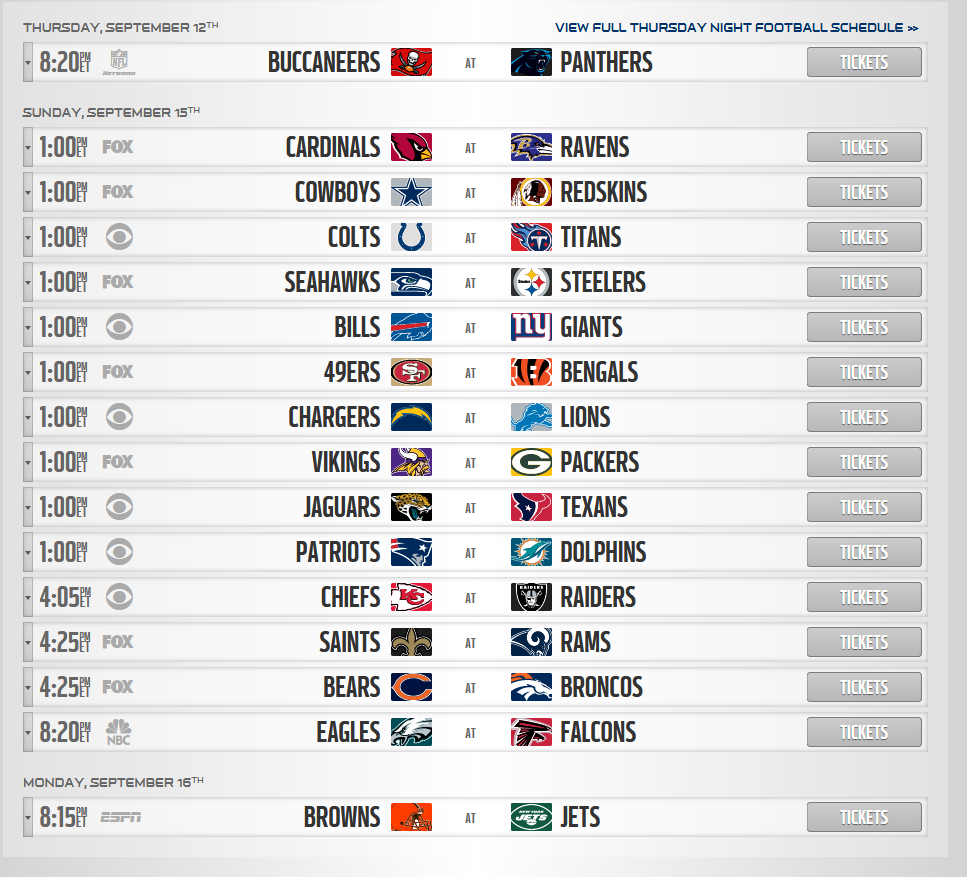 Welcome to Week 2! Time to overreact to the Week 1 results and crown fast starters as future SB champions while guaranteeing teams that struggled in Week 1 will miss the playoffs. Here are my picks for the week (this week has been rough, will edit in post Thursday picks later tonight or tomorrow):

Panthers over Bucs - I expect Carolina to bounce back from their loss against LA and win comfortably at home.

Ravens over Cardinals - The Cardinals hung tough against Detroit, pulling out a tie over what seemed like certain defeat. The Ravens dominated Miami and are favored to do it again. I don't think this will be a blowout, but still expecting a comfortable win for Baltimore.

Cowboys over Redskins - Another mismatch on paper, I think this will be a close one but will end in victory for Dallas.

Titans over Colts - Great comeback last week from the Colts that unfortunately fell just short. I think this game could go either way - I'll default to the home team.

Steelers over Seahawks - Easy to overreact over the terrible performance from the Steelers last week, but I like them to bounce back at home against Seattle.

Bills over Giants - The Giants do not look good outside of Barkley.

49ers over Bengals - Not a believer in Andy Dalton or an AJ Green-less Bengals.

Lions over Chargers - Lions gave away a win last week against the Cardinals and now get a really good team in LA at home. I'll take them in a minor upset.

Vikings over Packers - Should be a good game, I like the Vikings Defense to contain Rodgers here.

Texans over Jaguars - Houston almost pulled off the upset thanks to Watson's heroics last week. I like them to take down the Jaguars who are likely still reeling from the loss of Foles.

Patriots over Dolphins - A gross mismatch on paper with the line going up to 20 points this week. Easy win for New England.

Chiefs over Raiders - KC looked great last week, and while Oakland had an impressive win against Denver last week I don't see them keeping up with the Chiefs.

Rams over Saints - I imagine New Orleans will come out pumped to avenge last year's NFC Championship game, but I think the Rams will take this one at home.

Broncos over Bears - A close matchup on paper, I think the edge goes to Fangio who knows the Bears roster (and their defense) inside and out.

Eagles over Falcons - I'll overreact to last week, the Falcons look overrated and the Eagles shined in the 2nd half of last week's game.

Browns over Jets - Tough loss for the Jets to lose Darnold, I think I would have picked an upset here otherwise.

Bills have a superior secondary. They’ll stack the box on Barkley. He will still rip some off but Shurmer and Eli can’t help themselves and will try to throw.

Bills receivers will chew up Giants secondary and open the run game up for Devin Singletary.

Need a big game out of DJ Moore. Can’t always give the ball to McCaffrey
Reactions: JareBear: Remastered

Dude Cam looks bad. I had heard on the radio that he's looked terrible for awhile now but seeing it with my own eyes now. Dude has accuracy issues, lost some zip on his throws, and doesn't seem to move anywhere near as well as he used to

Watch him go off now after I wrote this

I think the Broncos are gonna look a lot better this week but I am not sure it will be enough to get a W against Da Bears. Will suck to start 0-2

I'm picking Bears 27-24, I think they look better this week too and even with the Mile High Advantage I think we come up a little short
Last edited: Sep 13, 2019

plane.jpg said:
Need a big game out of DJ Moore. Can’t always give the ball to McCaffrey
Click to expand...

I have him in one league as well. I started him tonight even though it isn't one of my deeper leagues so I have plenty of WR depth. Already regretting it

Sam Darnold has mono? I didn't know that he is 13 years old
Reactions: DadEggs

Shaq Barrett with back to back sacks. Hate that we couldn't keep in Denver.

Panthers can jump on that Tua train.

Fox Mulder said:
Panthers can jump on that Tua train.
Click to expand...

Not a good start for Carolina - I missed the game, did Cam look that bad?

greyshark said:
Not a good start for Carolina - I missed the game, did Cam look that bad?
Click to expand...


Yes he did.
Reactions: JareBear: Remastered

The Patriots will either:

There will be no other.
Reactions: JareBear: Remastered

Kind of surprised the Bucs won, and it seems Cam is stuck In a ruck right now. He hasn’t thrown a single TD yet, I think. He’s gotten decent yardage and only one pick so it’s not as bad as it looks(but it’s still bad) and I guess Winston redeemed himself some.

Lot of talk around town about Shaq Barrett and his 4 sacks through 2 games and the Broncos letting him go.

He's a guy that always flashed in training camp, practice, and pre-season, but played behind Ware/Miller, then Ray/Miller, then Chubb/Miller, and I guess people could argue we just couldn't justify the cap space but I disagree with that. I don't think there is such a thing as "too much pass rush," plenty of SB winning teams were stacked at pass rusher and utilized rotations to get guys snaps, like the Giants and Eagles. Shaq should have seen the field more in Denver and we should have tried to keep him, period. He is on a one year "prove it" deal in Tampa and barring injury he is gonna continue to break out and get paid huge this off-season


Thabass said:
The Patriots will either:

I hear people saying that maybe Belichick takes it easy on his "buddy" Flores, I don't think that is how Bill works tho..... They do have a history of letdowns in Miami tho, you are right

Cringe but Darnold should stop kissing those NY thots.

On a serious note, hope he gets better, mono is legitimately debilitating and it’s awful to have it. 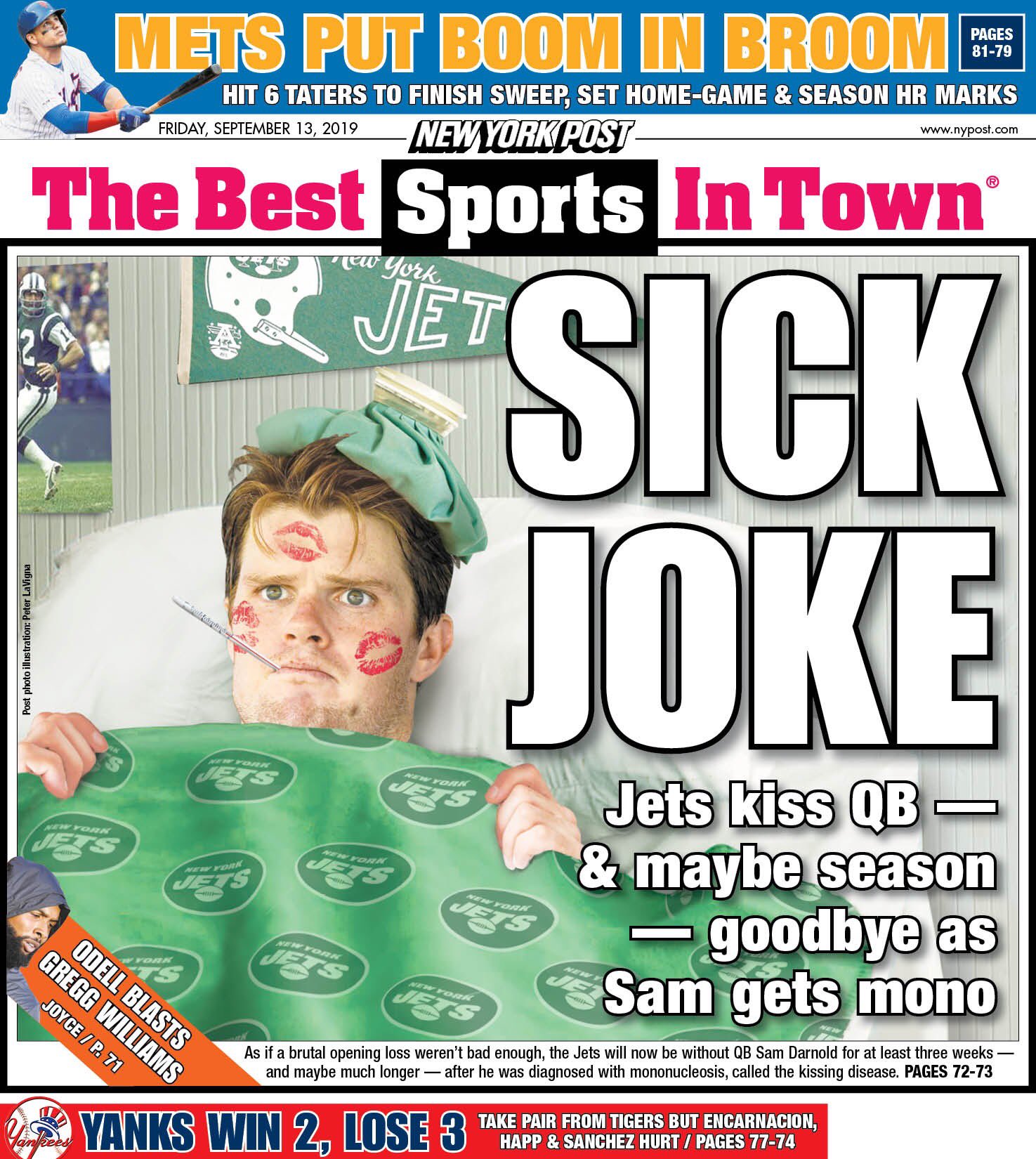 On a serious note, hope he gets better, mono is legitimately debilitating and it’s awful to have it.

My best friend had mono in high school and he was gone for like a month, lost crazy amount of weight. Sounded pretty serious

Added the rest of my picks for the week - hope I'm wrong about the Bears. 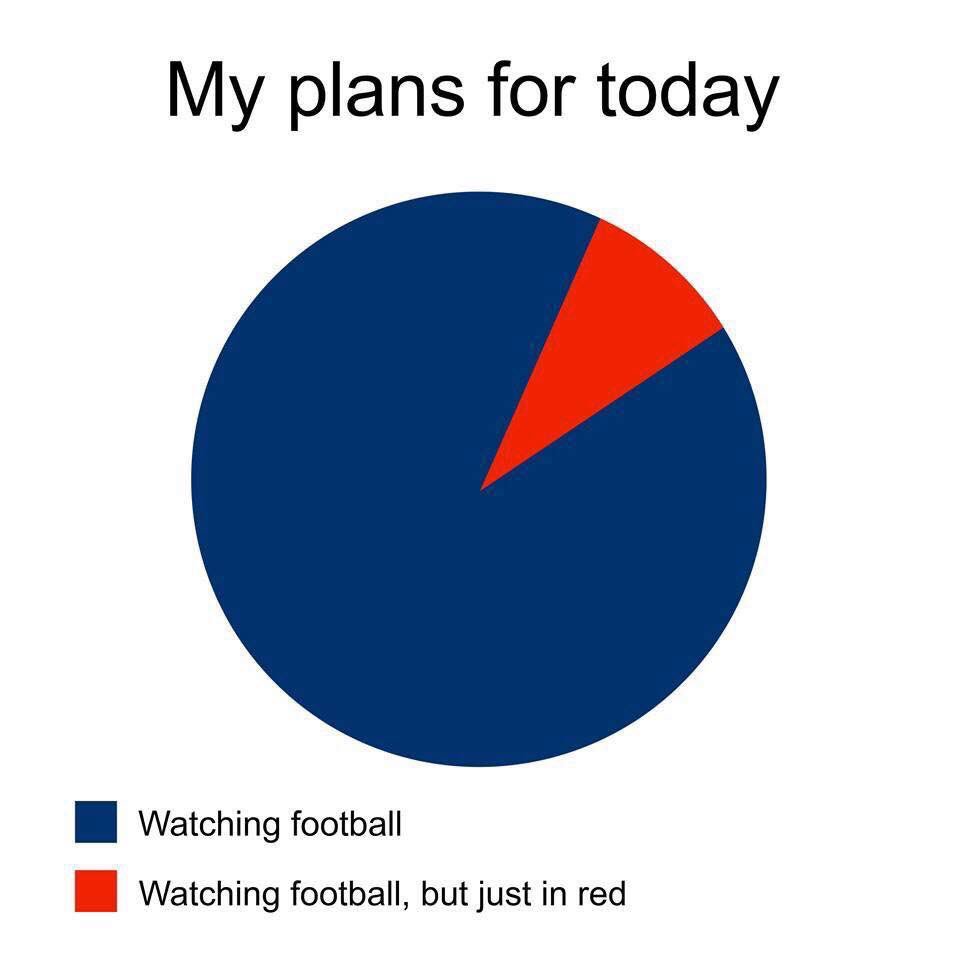 So much heart on the Colts. Jacoby and Vinny are putting us on a perfect position to lose, but the rest of the roster just refused to back down. Amazing. If only our kicker had retired instead of our QB we could be SOMETHING.
Last edited: Sep 15, 2019

Packers are giving Minnesota every opportunity to come back but the Vikings can’t get out of their own way.

greyshark said:
Packers are giving Minnesota every opportunity to come back but the Vikings can’t get out of their own way.
Click to expand...

I knew last week dominating Atlanta was a fluke. I'm shocked that somehow this game is this close. I am a fan of Cousins but this game has been beyond rough for him. I don't think Zimmer is the right choice for what this team has in parts, he reminds me far to much of John Fox and that awful foxball of run the obvious play on first and second down and spend all day in 3rd and long with a constant blitz coming.

Packers offense was pretty bad outside of the first quarter. Happy they didn't give the ball to Cook at the goalline.

Nice drive for Denver to open the game. Let’s see if Trubisky can improve from last week.

Flacco making a point to get Sanders involved early this week, fixing a key mistake from last week. I'm content with a FG to open the game..

And now they’re reporting the Bears have shrunk down the playbook for Trubisky - guess he’s a rookie again.

Montgomery looks good so far - hope to see a lot more of him today.

I don't doubt the Browns, youth is powerful the question with the Browns is if they can be consistent.

I am so sick of Garret Holds. Most penalized tackle in college and we are shocked he can't not tackle edge rushers week in and week out in year 3 of his career.

Tackle drafted after him (can't spell his name) for Saints is All-Pro..

Looks like I was definitely wrong about both offenses exploding this week in Denver
Last edited: Sep 15, 2019

Denver's Milk Carton Kids are still missing, please call this number if you have any information their whereabouts. Chubb and Miller c.ompletely invisible thru first 6 quarters of the season

He needs to be benched

Anyone else is better at this point

Absolutely terrible first half from Trubisky - defense looks great, maybe they can score a TD in the 2nd half because the offense will continue to struggle under Mitch.

Radio guys saying "well who can we put in there?"

Bruh put ANYONE else in there

ANYONE else is better than Bolles right now,. we are going backwards more than we are going forward. That is a fuckin PROBLEM

This turning into a slopfest

So many penalties - neither one of these teams look like playoff teams right now.

Big stop by the D - impressive drive from the Broncos but no points.

What a run by Patterson - let’s get this in the end zone!

Thabass said:
The Patriots will either:

Good thing I am stocked full of beer, this one is a stinker for Broncos Country. I thought we would lose, I didn't think we would have more holding penalties than points. We go into Green Bay next week, 0-3 gonna suck. Vic looks lost on the sideline as a HC. I loved the hire but you can tell he's not used to be being on the sideline.

Travesty of a roughing he passer call there to keep the drive alive - let’s see if Denver can put up 7.

BIG TIME interception to kill the best Bronco drive of the game!

Worst roughing call I have ever seen. Ball was still in QBs hands

Crazy finish - ecstatic to escape with a victory. Go Bears!

Fangio always harps "death by inches," well if no one touches the guy, the clock runs out. Guy isn't down until he's touched. Crazy finish.

One of the worst ref crews I have seen, but at least they called it terribly for both sides

I ain’t really too upset because honestly I felt we deserved to lose but this is a bad call. Objectively terrible.
You must log in or register to reply here.