EN beat the dragon in less than 2 hours was expecting a harder battle for them
Reactions: Omega Supreme Holopsicon

Sony music group to launch more than 50 Vtubers. I guess they are going to be the biggest.
Limited to those living in Japan. Age 16. Talent can leave agency. hmmmmm
Reactions: Shaqazooloo and Omega Supreme Holopsicon

Ame back on her grind

Smiles and Cries said:
^ You guys are way off topic considering what vtubers are thus far in current times. The Human aspect and the connection to the fanbase is still a roleplay thing. Having person performing is still a huge part of the community. People talking to bots or A.I. is a totally different community and fetish based and driven fans. Very different subject that deserves its own thread.

We have vtubers roleplaying as A.I., Robpts. Aliens, and everything unter the sun. But to core of it is the performance and lore the character wishes to build a world around.

This is like saying weebs are the same as furries. Different set of folks.
Click to expand...

Well guess we could have discrimination against ai. But that is not the only thing coming, synthetic biological humans are coming, sufficient technology and you can bioprint girls.


The powers possible in this age, they are intoxicating,

That is also a potential avatar, but it's a known reverse isekai avatar for players, aka anyone anywhere anytime can be it.

Smiles and Cries said:
I have noticed some vtubers have the same likeness as their real life facial features. Hololive tend to do this a lot. It would be a good choice imp.
Click to expand...

This theme of a kind of alternate world embodiment yet sharing same appearance was explored in the isekai anime "so I'm a spider, so what?"
Last edited: Jul 23, 2021

how does that even happen?

Kinda like we need immortality, that's a lot of time.

I wonder if when we get AR glasses, and later Full dive, will gura use her Gura persona?
Last edited: Jul 24, 2021
Reactions: Smiles and Cries

Oh look who's back:

Rya.Reisender said:
Oh look who's back:

Rya.Reisender said:
Oh look who's back:

glad to see she is ok

Smiles and Cries said:
what is she watching looks like a video

glad to see she is ok
Click to expand...

She was finally wrapping up the tarantula cooking contest she wanted to do.

And as expected, she was just too unmotivated to stream. But went eating with Coco and Kanata today and they motivated her to stream again.

She said she spend most time in Kindergarten. I wonder if she meant college with that or if she actually works at one now (was her job wish as child after all).
Reactions: Stitch, Shaqazooloo, Omega Supreme Holopsicon and 1 other person

this should be good 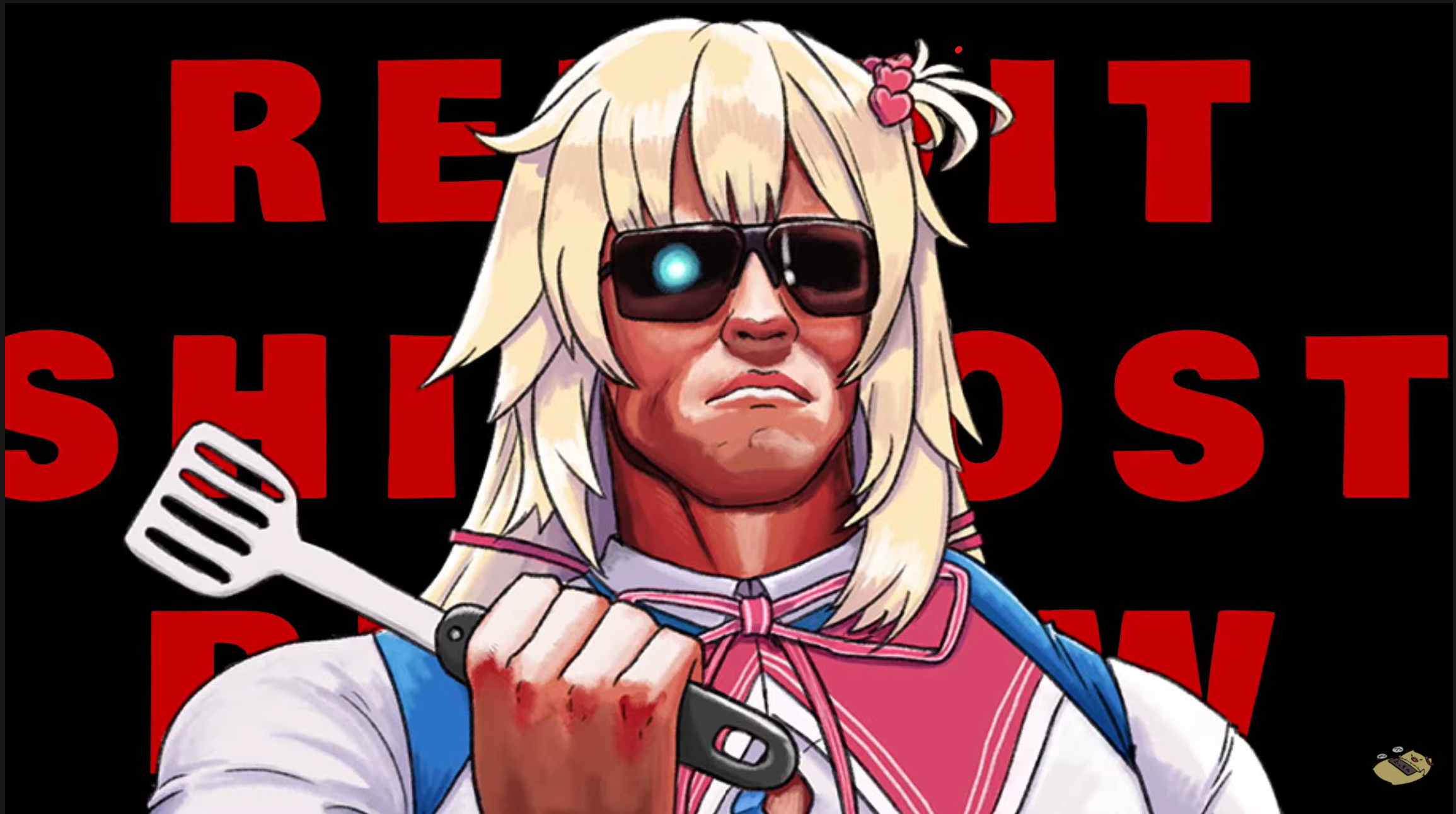 Anton668 said:
this should be good
Click to expand...

With Haachama I learned to never get hyped on something. I could be amazing or it could also be just a joke or cancelled 1 hour before start.
Reactions: Shaqazooloo

I remember playing a horror game was one of her stretch goals in her charity stream. She picked a good game.

I don't feel like ever playing this game but could be a good watch
Reactions: Omega Supreme Holopsicon and Shaqazooloo

Zen does nothing for me. Automated voice completely turns me off of his/her stuff. Too bad because I think the model looks great.
Last edited: Jul 25, 2021
Reactions: Omega Supreme Holopsicon, Smiles and Cries and Shaqazooloo

Nene just did a stream to comfort the fans:

She claimed she'll never leave and be there forever. Quite a bold statement.

Hana was the least successful members of Kawaii5 (according to subs, money-wise she earned most alongside Nene apparently) and she's leaving to pursue her dream. She only streamed for 3 months. Her real identity is still unknown.
Last edited: Jul 25, 2021
Reactions: Shaqazooloo 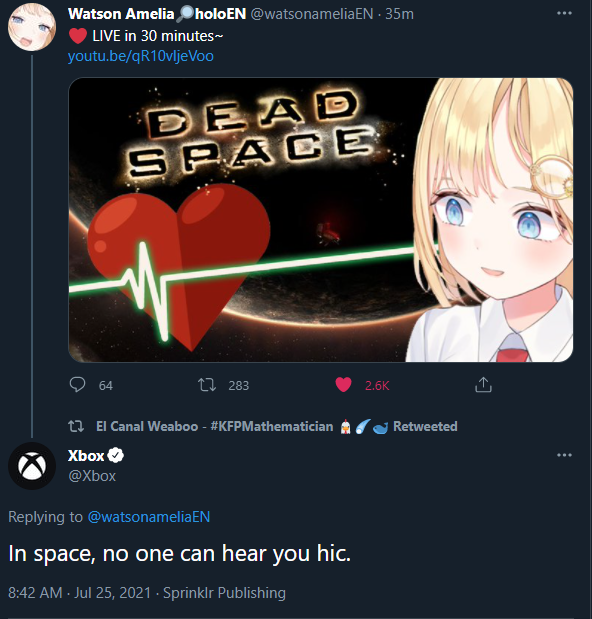 Reactions: Smiles and Cries and Shaqazooloo

Padko playing There's No Game in 1 hour. Really looking forward to this:

you have to follow her a bit to know hic is her thing. hearing it once does not tell you it is a forever thing with her

I'm glad Xbox has been in the rabbit hole for a very long time
Reactions: Shaqazooloo

guess she is building her content
Reactions: Omega Supreme Holopsicon

Kiara is about to be banned by Nintendo talking about Zelda's panties
Reactions: Shaqazooloo

Reactions: Shaqazooloo and Smiles and Cries

Korone playing SpongeBob was quite cute.

Reactions: Shaqazooloo and Smiles and Cries

way too cute she is not cute out for this

Pretty sure many more were affected by it without even knowing. Like all those that took a 1-2 week breaks because of "pain in the throat".
Reactions: Shaqazooloo and Omega Supreme Holopsicon

I like such teeth, but the problem is the tongue and kisses should you have such.


Smiles and Cries said:
Kiara is about to be banned by Nintendo talking about Zelda's panties
Click to expand...

copyright reform is needed, and increasing the power of fair use too. The U.S. should try to export the concept of fair use and free speech to other countries too.

On another note, I like it that many vtubers look beautiful, in accordance to my notions of ideal beauty.

Probably similar to either sakura from ffbe, red girl from nier, or altair like, I think altair is a suigintou expy 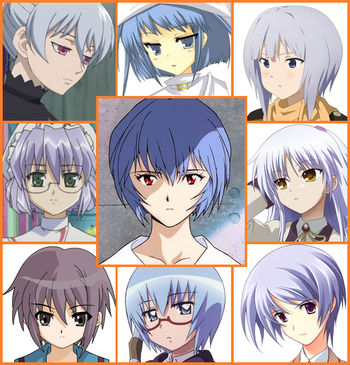 The Rei Ayanami Expy is a character archetype common in Japanese Media, started, or at least codified, by Rei Ayanami from Neon Genesis Evangelion. Common characteristics of the archetype include: Love Interest (usually female). Mysterious and/ …

Anime style is good, but cg style like ffbe is more realistic(both are equally good, but ceramic like skin is of my taste, there's some naughty gura stuff in cg flying around...)... trouble is number of human faces is finite, and if you take on such you will find you actually look like at least someone in the real world too.(I'm not sure what is going to be done about the finiteness of human faces, and the fact descendants can often look identical to ancestors, especially with immortality around the corner. Not to mention identical twins. In some sense likeness must fall into public domain, but in another this could be highly offensive and respect should be paid to some degree.)

Rya.Reisender said:
Pretty sure many more were affected by it without even knowing. Like all those that took a 1-2 week breaks because of "pain in the throat".
Click to expand...

or lost family and can't say that to fans
Reactions: Shaqazooloo and Omega Supreme Holopsicon

I still can't enjoy her streams so far I will try watching this one hope she in on the EN server.

edit: o0ps she went into the JP server

what is Mori doing in the EN server so it turned into a collab
Last edited: Jul 28, 2021

Watching Silvervale hang out with Rob in Japan was worth it just for this lol...

Just me randomly pointing out one of my favorite Vtubers Ushio Ebi again:

She is a great example for an actually good and talented Vtuber. She always spreads a good mood, has enough gaming knowledge, talks about really fun things (with lots of great quotes) and she is fully indie. She even composed the music in her stream herself.

The only downside is that she does not really play many interesting games, so unless you're into Minecraft (or similar games) streams she doesn't offer too much to watch. I told her once that she should be playing more funny games blind on stream, but she replied she prefers to play and enjoy those alone, so no luck.
Last edited: Jul 28, 2021
Reactions: Shaqazooloo
You must log in or register to reply here.