According to police cited in the Japanese media, the fire was reported just after 1pm but was extinguished by employees before emergency services arrived at the scene.

It’s reported that desks and chairs in a room on the third floor were partially burned in the fire, but that no one was injured.

The police and fire department are investigating the cause of the fire, but it’s claimed that based on the conditions at the scene, it’s believed that the fire could have been caused by an electronic device that was being charged.

Japan is currently in the midst of a record summer in terms of severe heat days, with the country having experienced over 14 days of temperatures over 35 degrees Celsius so far.

Only weeks ago, Nintendo outlined emergency plans for its Japanese headquarters, in case of a disaster such as a major earthquake affecting its Kyoto buildings.

In a shareholder Q&A, Nintendo president Shuntaro Furukawa claimed that even in the event of such a disaster, the company has a detailed plan for how it could continue operating.
“Even if our business continuity is hindered by a natural disaster, such as an earthquake, or by some dangerous infectious disease which is highly contagious and could cause a serious medical condition, we have a documented response plan and have implemented various proactive measures so that we can restore operations as quickly as possible,” he said.

“If a disaster occurs, we will convene a disaster response committee headed by the president that will act to confirm the safety of our employees, protect the integrity of company property, and secure personnel and communication systems for the recovery effort.”
Furukawa also claimed that Nintendo has taken other measures such as creating data backups and using multiple manufacturing partners to make sure any disruption is minimal.

I have indeed heard that the switch is on fire lately.

Nothing says it was caused by a switch. You know people working at Nintendo must have smartphones or laptops, or even tablets...

(Possibly caused by a Switch)​

Switch pro confirmed. Too much power in a small form factor. No wonder it put fire on their office.
Last edited: Aug 15, 2022

Glad nobody got hurt.

Time for a Switch recall.

Switch 2 having thermal issues? surprised we haven’t seen tons of headlines like this yet from news sources

Bernd Lauert said:
Glad nobody got hurt.
Click to expand...

The employees handled the situation well.

This is what I was considering adding.

SenkiDala said:
Nothing says it was caused by a switch. You know people working at Nintendo must have smartphones or laptops, or even tablets...
Click to expand...

Or you know, the hundreds of PCs they use for game development

That feeling when you leave the popcorn in the microwave too long and its international news.

After the arson attack on KyoAni 3 years ago, this headline made me fear the worst...

A non-issue. A small fire, put out before the Fire Dept even got there, in one room, really isn't a big deal.

This is what happens when you try and squeeze a 1070 into such a small form factor.

Fuz said:
Caused by a Switch or caused by a switch?
Click to expand...

I see what you did there!

Soapbox Killer said:
This is what happens when you try and squeeze a 1070 into such a small form factor.
Click to expand...

All that Labo material sitting around non a/c Japanese offices.

Guess Switch 2 is going back to the drawing board. Too much power for a handheld.

SenkiDala said:
Nothing says it was caused by a switch. You know people working at Nintendo must have smartphones or laptops, or even tablets...
Click to expand...

Journos go to such lenghts for clickbaits.

I mean, I'm not surprised as it's Japan. And they probably got their late because they were following the speed limit.

"Two chairs and a desk were burned....along with a keyboard, a mouse pad, an employee badge, and a picture of a man and woman on holiday in Hawaii overlooking a waterfall...this looks like the work of that famous masked arson...THE SWITCH!!!"

Must have been trying to play Watch Dogs

Someone's been playing with a hacked, overclocked Switch.

BOTW2 is really pushing the Switch past its limits.

That’s what happens when you activate the hidden GPU. 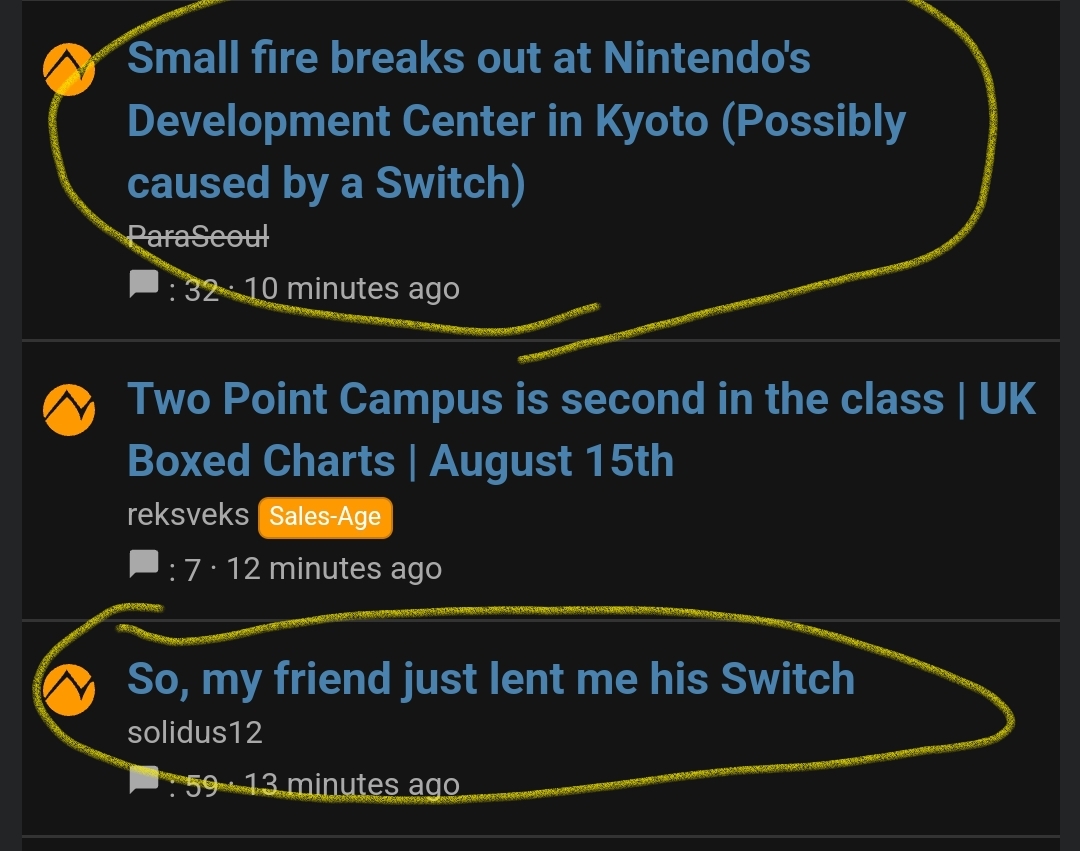 Possibly caused by anything that causes a fire

RobRSG said:
That’s what happens when you activate the hidden GPU.
Click to expand...

Mr. X was right all along. Just wrong platform.

So much here potential for puns / memes.
You must log in or register to reply here.