“I really appreciate everything Reggie has done for Nintendo,” said Shuntaro Furukawa, President of Nintendo Co., Ltd. “Inside and outside our company, Reggie is known as an exceptional leader. We are grateful that he is leaving the business in good shape with strong momentum. While we will miss him and we wish him the very best in his retirement, we are also pleased to have such an able successor ready to step into that role. Doug Bowser and the rest of the team will ensure a seamless transition and continued momentum for Nintendo.”​
“Nintendo owns a part of my heart forever,” Fils-Aime said. “It’s a part that is filled with gratitude – for the incredibly talented people I’ve worked with, for the opportunity to represent such a wonderful brand, and most of all, to feel like a member of the world’s most positive and enduring gamer community. As I look forward to departing in both good health and good humor, this is not ‘game over’ for me, but instead ‘leveling up’ to more time with my wife, family and friends.”

“It has been my great fortune to work with and be mentored by Reggie for four years at Nintendo of America,” Bowser said. “And rest assured, we will continue to build on his work to evolve and expand our brand, furthering Nintendo’s global mission of creating smiles. There are millions more of those to come.”

Fils-Aime started at Nintendo of America in 2003 as its Executive Vice President of Sales and Marketing and became its President and COO in May 2006. His time with Nintendo began during the Nintendo GameCube and Game Boy Advance era. His leadership of Nintendo’s largest territory expanded the audience for Nintendo products as phenomena like Nintendogs, Brain Age, Wii Sportsand Wii Fit brought millions of new players to the world of video games. Fils-Aime’s management led to record-breaking sales for products like the Nintendo DS, Wii, Nintendo 3DS and Nintendo Switch systems. At the same time, he communicated innovative new product features to a mass audience via his strong and affable personality, making him a favorite of media, members of the video game industry and Nintendo fans alike.

During his tenure, Nintendo of America has expanded its physical presence in the U.S., having established a key sales and marketing office in Redwood City, California, and built a new NOA headquarters in Redmond, Washington, that has received awards for its environmentally friendly design.

Bowser is an industry veteran who joined NOA in May 2015 as the Vice President of Sales before being promoted to Senior Vice President of Sales and Marketing the next year. During his time at NOA, Bowser led the sales and marketing efforts for Nintendo Switch, which became the fastest-selling video game system of this hardware generation through 21 months, according to The NPD Group. Previously, Bowser was an executive with industry powerhouse Electronic Arts, most recently as the company’s Vice President of Global Business Planning. He also worked at Procter & Gamble in various sales leadership roles in Asia, Latin America and the U.S.
Click to expand...

End of an era. I just hope they don't get another Cammie. She did Nintendo no favors.
O

It's only fitting that someone named Bowser should head Nintendo.

Woah! That's like an end of an era right there, Reggie's gotta be one of the most iconic figures in gaming. Is his body really ready to step down?
Well it'll be cool having Bowser actually show up at E3--oh shit Nintendo doesn't really do E3 anymore do they, they just livestream some Treehouse Thing, huh?

When you get nominated for a executive cargo just because your last name is damned solid for the business.
N

My body is not ready for this

Good luck, enjoy your retirement but I won't miss you as imo he was the least personable execs and it was always cringy to me when he would speak and use his used car salesman pr bs. They all talk pr talk but idk he was the least convincing.

Retire?, i thought he was like 45 or something lol.

He may have the last name of the king of Koopas, but the real question is...

is his body ready?

and the beginning of a new one.

reggies message to all

He could've did this for another decade if he wanted. But I'm sure he made enough from Nintendo to never have to work again.
V

That 360/PS3/Wii life cycle was like 8 years of this guys 15 year career. Damn that was a long cycle.

End of an era. I still haven't bought or played anything from nintendo since the snes days but ya thanks for all.
C

Dude was a class act and a cool guy. In that older boss kinda way. He had to sell some pretty hard news to fans but is lucky to go out on a high note.

End of an era for sure. Best of luck Reggie.

My body was not ready for this.

He was a good meme. Good luck Reggie.

Well shit that sucks. Even though he was just a personality for the company and we've seen less of him over the past few years I'm still going to miss the dude.

That's definitely not something I expected to read today.
Definitely feels like the end of an era. I never really liked him but he is definitely one of the most iconic non-dev faces in gaming

57. And he has probably made enough money to afford retiring early

Man this sucks. thanks for the memes and all the fun moment reggie.

I see no changes occuring.

It will be tough to take over. Good luck to Doug Bowser.

We lost Iwata, then Reggie. I do not like where this is going. 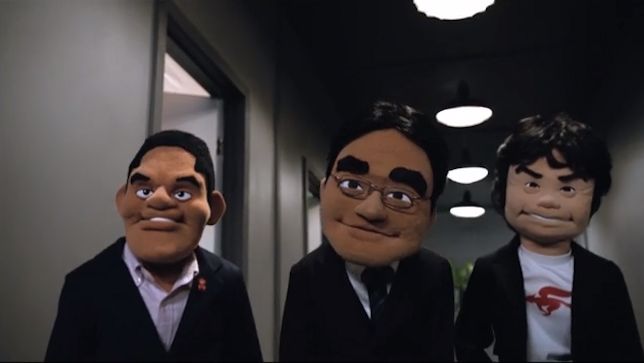 deriks said:
My body is not ready for this
Click to expand...

Came here to post this, end of an era man - gaming is getting depressing by the day.

Man, I'll miss him, as much as you can miss the president of a company. Fuck the cynics, Reggie was a good dude, and great meme material.

His pension is ready.

Top notch President for NOA. It's great when there is a leadership team in place that is actually able to interact with the fanbase.

Maybe now we will get a Mario where bowser wins?

He is the best, he'll be missed

Best of luck to Bowser

I did not like Reggie. He always had the most bs pr spin back in the day when dodging questions about metroid, online gaming etc... his claim to fame is a meme

Nintendo of America doesn’t really do anything tho
Last edited: Feb 21, 2019

But reggie... my body was ready

Damn, guy is a legend. Best of luck to him.

I guess thats the end of Reggie memes, huh?

My body is ready

LittleBusters said:
My body is... not ready.
Click to expand...

Beat me to it!

But wow...I mean, it had to eventually happen, but still...wow.
You must log in or register to reply here.

Woopah replied
May 1, 2022
Ex-NOA head Reggie Fils-Aime is neither for or against unions. Believes they are a symptom of a bigger problem.
2 3