More than 3,000 people are working on Call of Duty, Activision says

More than 3,000 people are working on Call of Duty, Activision says

Call of Duty is by far Activision-Blizzard's most important franchise, and now 31% of its workforce is working on the franchise.

Call of Duty is by far Activision-Blizzard's most important and lucrative franchise. Annual releases paired with two multi-billion dollar F2P games have helped push company revenues to all-time highs from 2020-2021.

Activision now says it is doubling-down on Call of Duty investments. Over 3,000 people are working on the franchise, representing 31% of its total employee headcount (9,800) and nearly half of its total developers (6,800). The publisher says it is developing "the most ambitious plan" in franchise history, which will culminate in Modern Warfare II and the new revamped Warzone.

"We are working on the most ambitious plan in Call of Duty history, with over 3,000 people now working on the franchise and a return to the Modern Warfare setting that delivered our most successful Call of Duty title ever," Activision wrote in its 2021 annual report. 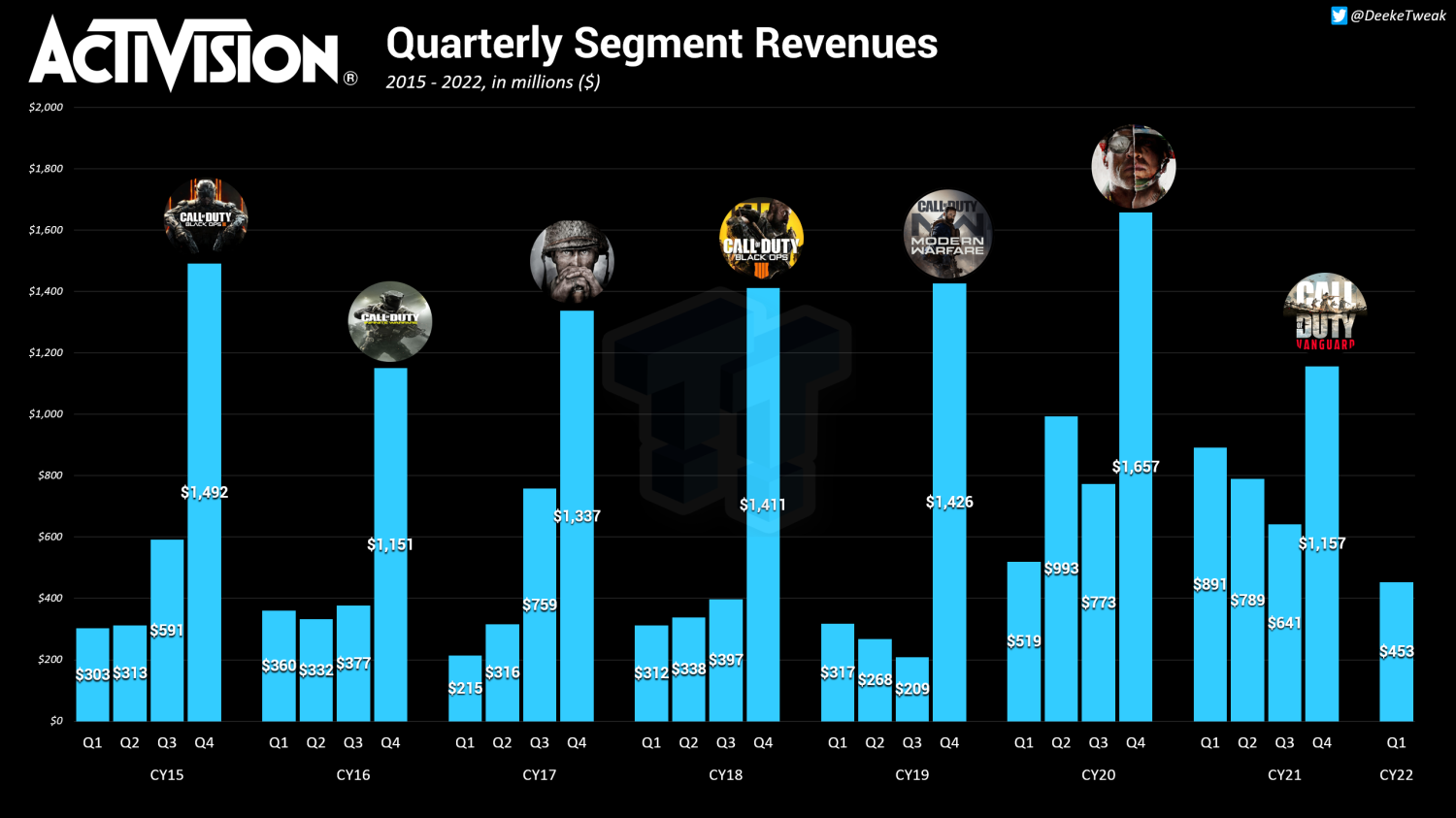 You know what sucks....that infinity war campaign was effing awesome. I guess they funked up the multi player hard on that. Hopefully more people play the campaign on game pass.

They seem to always mention these things as a thing to boast about but most of the time those projects seem to be in turmoil.

Those arent just game numbers. It's the overall revenue generated that quarter. The game releases are just there as markers. For Warzone, you will have to look at Q1 2020. Notice how Q1 2019 was around $330 million but jumped to $550 million in Q1 2020. Thats Warzone which was only available for 2 weeks in March. The next quarter, it jumped to a billion dollars. 3x more than Q2 2019.

Thanks to Warzone, they have been able to triple their revenue in quarters where they dont release games. It's insane.

So revenue was $891 in Q1 of last year, and only $453 million this year. A massive 100% drop. How no one gets fired over this is beyond me. A fuck up of epic proportions. Cant blame everything on vanguard either. The new warzone didnt really impress. Shouldve made it next gen only. People are clearly tired of the same old shit.

It will be interesting to see if they ever capture the $1.65 billion total of Black Ops Cold War quarterly sales. Modern Warfare 2 will be big, but they will basically need to sell 20 million units in the first two months to get there especially with warzone on its last legs.
You must log in or register to reply here.

James Sawyer Ford replied
May 10, 2022
Call Of Duty Might Stop Being A Yearly Series
News Rumor