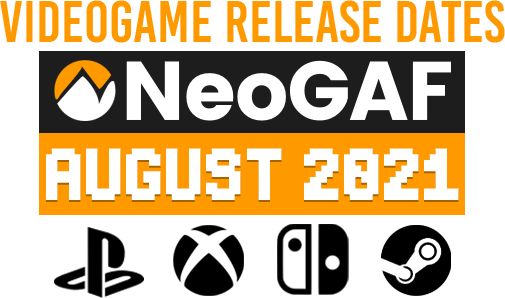 Psychonauts 2 is a platform-adventure game with cinematic style and tons of customizable psychic powers.
​
For me August has too many games to choose from! I'm more than likely to pick up Aliens: Fireteam Elite myself, maybe even going so far as being dumb and getting the special edition for all those stupid cosmetic bonuses ('cause I'm stupid). It's a bit of a shame there's no proper cross-play for it but it looks really decent otherwise. Perhaps, if the prices are right, I'll get Grime and Falconeer as well. Other than those I'm eager to see the impressions for Psychonauts 2 and whether or not the first one is mandatory if you haven't already played it (or if it even holds up?) so it's not a day one for me. Also I wasn't even aware that Kena is releasing this month so I'm curious to see more as I've not heard much about it. Anyway what are you getting, Gaf?

As always let me know if any dates are missing or are incorrect. Oh and get Hades on console if you haven't already played it. It's simply fantastic.

(Had more highlights but silly Gaf only allows for 10 pieces of media per post)
Last edited: Jul 29, 2021

Actually same for me. Kena and 12 Minutes

I need to play through Psychonauts 1 before 2 comes out.

Excited to finally play Hades and 12 minutes as well.

October is gonna be huge. Battlefield 2022, Far cry 6, Back 4 Blood, Marvel's Guardians of the Galaxy. Wish august had some of these games.

In for Psychonauts 2 and 12 Minutes.

Kena and NMH3 are maybes.

Strong month! Will probably pick up Psychonauts and Kena and Ghost of Tsushima at a later date. Interested to see how Fracked and I Expect You to Die 2 come out

engstra said:
Strong month! Will probably pick up Psychonauts and Kena and Ghost of Tsushima at a later date. Interested to see how Fracked and I Expect You to Die 2 come out
Click to expand...

There's a demo out now for Fracked now. I'll be picking it up at launch.
E

R6Rider said:
There's a demo out now for Fracked now. I'll be picking it up at launch.
Click to expand...

Yea I'm aware, just haven't had the energy to set the VR up. From what I've heard the feedback's been really positive and that's good enough for me

Just found out that Mortal Shell + DLC will finally be released on Steam this month as well. I wasn't too hot on it before but apparantly they're adding a roguelike mode which I'm all about so I'm kind of hyped now.

Kena and tsushima expansion (if not too short) for me.

Tsushima Expansion, Kena (depending on GAF impressions and reviews), and Hades coming to GamePass will be nice. Wonder if it will have Steam Cross-save? Guessing not

Only No More Heroes III for me this month.

I will be only getting Kena and No More Heroes III.

I'm gonna play Hades that is for sure.

Maybe Kena if i find the time.

So, basically Kena Bridge of Spirits and not much else.

GoT DC, Kena and Hades for me

Just gonna pick up GoT DC. Nothing else on the list really interests me and I've been trying to work on my backlog recently.

I'll be getting Kena, Contracts 2, and Fracked for sure.

Others I will get later: Greak, GoT Expansion, 12 Minutes, and I Expect You To Die 2.

Ghost of Tsushima and Kena to me.

Just Hades, GOT upgrade and Kena for me.

Psyconauts 2 is a definite. Keeping an eye on the FPS, Lemnis Gate and may try it out, as I feel it could be a sleeper hit.

Danjin44 said:
I will be only getting Kena and No More Heroes III.
Click to expand...

I guess it only No More Heroes III for me.

Haven't played Ghost of Tsushima yet, so I'll be checking that out.

Same for Hades and since it's on Gamepass I'll give it a go for sure.

Psychonauts 2 and 12 minutes are also interesting.

Hah in my gut it felt too soon for Kena anyway what with its zero marketing push or other sort of mainstream coverage. Off the list it goes then!
You must log in or register to reply here.