So for whatever reason I had this urge to play Jak 2 again. Back in my childhood I played Jak 2 first and then Jak 1. Never Jak 3 since I was a poor student who couldnt afford it

I first got introduced to the series with the PS2 demo disk that was in my PS2. It had a Jak 1 trailer with this really cool music in it


At the same time, Jak 2 got released and I read all the reviews about it in gaming magazines and I watched all the video reviews they had on their magazine DVD's (crazy times I tell ya). Something about the atmosphere in this game just catched my attention and I decided to trade in some old games for it.

And boy oh boy did I love this game. And christ all mighty did I hate this game. Why is it so difficult. I thought this is for kids! Well...kinda.
Like many young people under the age of 16 or even 18 I wanted to play something similar to GTA....or just GTA. But its actually not that easy to get your hands on these games here if you dont have someone who buys it for you. And of course, all of a sudden everyone was growing a conscience when I wanted to play something like that. It was right around the time some school shootings were taking place in my country and the debate about brutality in video games was front and center in the mainstream media.

So Jak 2 did something clever and basically gave that young demographic what they wanted. An open world, with vehicles, theft, shotguns and some adult humor. Rated USK 6. Noice.

So yeah I became a big fan of the first 2 titles and always wanted to play the 3rd one. I still decided to buy the remaster of 2, just because of nostalgias sake.

Does is hold up these days?

Surprisingly. Yeah. I have a lot of gripes with the game, but at the end of the day, I always come back and want more! We are really missing games likes this right now.

First of, the atmosphere and music in this game are great. The city has this Orwellian vibe to it and some of the architecture reminds me of Midgar from FF7. The city feels buzzing, lots of NPC's and "cars" on the "streets". Almost too much, but we come to that later.
This more dark and gritty tone (especially compared to the first Jak) is somewhat alleviated by the humorous cutscenes. I think the humor is fine and I have to chuckle every now and then, but I guess some people can take it or leave it. I think it fits.

One thing I always liked about the Jak games is just the way he controls. The animations do a lot to make it feels smooth and dynamic. Jak stretches and bounces all over the place and it looks and feels great. The weapons have some surprising good feedback. That shotgun oomphes and you feel the kickback in his animation. I can not stress enough how important the animations are to make this game just feel good to play. The simple whirl attack into shooting some enemies feels great even these days.

The level design is also great. This game does not have any mission markers or even a map when youre in a level, but somehow you always find the right way quickly. The level design just steers you in the right direction and it makes the levels feel more natural, since you are not constantly looking at a map. I miss that.

And the whole variety of things you do is great. It just never gets boring. Some actual jumping and running, vehicle sections, shooting galleries, hover boarding, racing, shoot em up sections. Its all there.

Yeah the vehicles in this game dont control superb. I actually like the floatiness but they need some kind of counter thruster to have more control. But as it is, its almost impossible to not run people over. And since like half the population in Haven city is part of the guard troops you are constantly being chased.

The camera is a bit shit at times. You sometimes cant move it were you want to and it doesnt follow you the way it needs to for some fights. So you get stabbed in the back by some enemies simply because you could not see them. Also you can not un-invert the controls...which is ... not great.

The difficulty spikes are probably a thing this game is famous for. So far, I think its actually fine. Everything except for one mission relatively early on was exactly right. But thats 30 year old me. 14 year old me was of a different opinion. And I can see that this game has a lot of potential for frustration. A lot of the mission I beat just as the timer ran out or with 1 health remaining. A lot of sweaty hands for a game meant for kids who were too young for GTA.

The gun aiming also isnt perfect. It sometimes feels a bit random if the gun auto locks to an enemy or not.
And sometimes I feel the double jump doesnt register correctly. There is something about the timing, if you mess it up just a little, he doesnt do it.

But at any rate, I'm still having a blast playing this game and I am honestly a bit surprised by that. I think something like this is really missing right now. I look forward to the new RC, however this series lacks the platforming part. Yeah they have platforms, but they are not really there to challenge you in any meaningful way. Ratchet is a shooter with platforming elements, while Jak is more a platformer with shooting elements.

Do you guys have any good or horrible memories of this gem of a game?
Reactions: Bo_Hazem and Rean no Kiseki

The pinnacle of the series! Haters need to seek taste!

Got it for Christmas one year after absolutely loving the first and it was the best present I got, couldn't put it down. Still have very fond memories. Still kinda stuns me that they took a cutesy platformer and mashed GTA into it and it actually paid off.


TheAssist said:
The difficulty spikes are probably a thing this game is famous for. So far, I think its actually fine. Everything except for one mission relatively early on was exactly right. But thats 30 year old me. 14 year old me was of a different opinion. And I can see that this game has a lot of potential for frustration. A lot of the mission I beat just as the timer ran out or with 1 health remaining. A lot of sweaty hands for a game meant for kids who were too young for GTA.
Click to expand...

Last time I replayed it there were two parts that still gave my grief, I think one was the race with Errol and the other was the infamous mission where you're assaulted by every guard in the city at the docks and have to escape. As a kid there was a lot more I struggled with.
Reactions: Javthusiast
E

AV said:
you're assaulted by every guard in the city at the docks and have to escape
Click to expand...

ppl nowadays only hate naughty dog for last of us 2 but a lot of people may still subconsciously hate them for this mission.
Reactions: Amish Prince, Javthusiast, TheAssist and 1 other person

I use Jak 2 as a perfect example of why checkpoints are necessary in most games. The difficulty wouldn’t feel that bad on most missions if they had mid mission checkpoints. Getting most of the way through the sewer escort and then having to start the entire thing again made it ten times worse than it really was.
Reactions: Javthusiast and TheAssist

I loved this Trilogy. Jak 2 is a great game but the combination of difficulty spikes and lack of checkpoints surely made it a frustrating experience.

back in the day I was a Jak guy, over the years tho Ratchet absolutely took the crown from Jak for me.

replaying Jak 2 just revealed all the really bad parts of the game that I ignored when I was younger because it was still new and exciting at the time. but actually taking a step back and looking at the game without rose tinted glasses... yeah nah... Jak 2 is just about tolerable to me these days.
the controls are far from perfect, the camera in chase sequences is absolutely atrocious, the leveldesign often boring as hell and the City hub doesn't offer much either.
Last edited: Apr 29, 2021

I got introduced to the PS2 with Jak 2.

People can say whatever about difficulty. They are right. But they are wrong if they think this is not a masterpiece.

Oh another thing, that reminded me of Cernys road to PS5 talk where he mentioned how they had to design the city according to what the PS2 was able to stream. Yeaaahhh you can see that here. Its so hard to navigate through these narrow corridors, especially with a time limit and while being chased, since some of the sectors are only accessible through a single path. If you take the wrong corner, you wont make it. 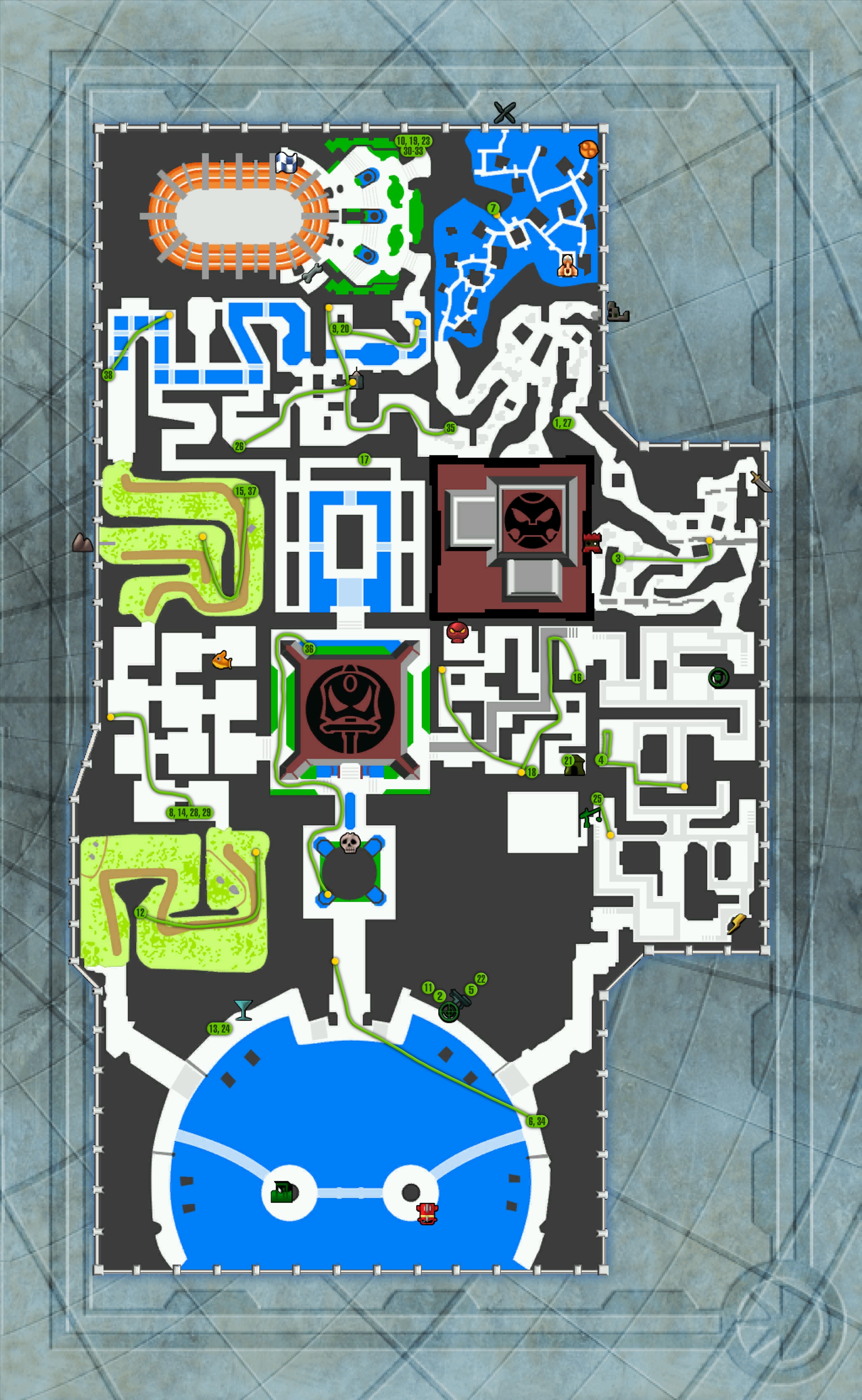 This page lists the locations of all the Orbs in the Haven City Orb Search Challenges in Jak II:

Here is the map. Usually just one entry and exit point from and to each zone. Probably using parts of the way to load in the assets. Just shows you how good rockstars streaming engine was back then.
I actually do wonder how they would design a new Haven city.
Reactions: Whitecrow

Good game but the lack of checkpoints made it such a bitch to get through. I prefer the first game over the sequels though which felt more like an actual platformer compared to the GTA-style of gameplay the sequels had.

Was my first Jak game. Loved it. Difficulty spikes were definitely a pain in the ass, but still a super fun ride,. Cool city, characters and even the vehicles I got so used to, I could switch lanes and dodge cars like a pro. xD

Surprisingly to this day I still haven't played Jak 1, 3 or Jak X, despite being a big Naughty Dog fan. Though I think I have the trilogy on ps3 through plus back in the day. Need to play them.
You must log in or register to reply here.

On the PS2, were you Team Jak and Daxter or Team Ratchet and Clank?

May 3, 2021 started The Gorby Congressmanz
May 5, 2021
Shakka43
2
Opinion Game Dev Naughty Dog Explains Why It Likely Won't Make Another Jak and Daxter Game