It's a delicious irony that one of PlayStation 5's most exciting exclusive prospects this year comes from some of the newest members of the extended Xbox Game Studios family, but let's not let that quirk of timing obscure the real story here: Arkane Studios, creators of some of the finest immersive sim experiences in its brace of Dishonored games and 2017's superlative if somewhat underappreciated Prey, is back with an all-new game that funnels some of that expertise into a tightly wound timeloop, and layers plenty more on top besides.

The topline? It's Dishonored with guns, an extension of Arkane's previous work in the world of immersive sims that mixes all that sorcery and supernatural power into a hard-boiled late 60s world of assassins and stylish villain's lairs; there's a dash of Clockwork Orange, a touch of The Prisoner, a serving or two of John Boorman's Point Blank and even - if you're old enough to recall - a bit of Monolith's beloved No One Lives Forever.

It's quite the mixing pot, then, but there's no doubting that first and foremost this is an Arkane joint, an immersive sim swimming in style and full of all sorts of murderous possibilities. You play as Colt, waking with a bleary head on the bleak shores of Blackreef. A remote northern European island, it first presents itself as a head of cliffs as craggy as Colt's hangover as he pieces together his situation - helped along by floating, fragmented text prompts, a knowing lift from What Remains of Edith Finch and further confirmation, should you need any, that Arkane is a studio with exquisite taste.

It's those text prompts that urge Colt to break the loop, the first sign that leads to the slow dread realisation that you're stuck playing the same day over and over again, the same NPCs following the same patrols and - most importantly - the eight targets known as The Visionaries you ultimately need to eliminate following their same routine. The only way to break the loop is by taking all eight down in the same day, the island's secrets and those of its inhabitants unfurling as you live through each day again.

The artstyle is exquisite, and it's backed up by some neat takes on period correct music - think swinging 60s, but scuzzed up through a fuzz pedal.

Now, how you go about taking down those eight targets is where things get fuzzier, as well as a lot more interesting. Blackreef is broken down into four distinct districts you're able to select from your base of operations - there's the wintry complex, a proper Bond villain's lair set amidst a snowstorm; Updaam, whose dank and shadowy streets could well be in Dunwall; the cavernous Kristal Bay; and finally the vertiginous urbanity Karl's Bay, with each available over four times of day. Those eight targets carry out their own routines across each of those areas - how exactly you get all to align so they can be taken out in a single loop is part of the fun, their whereabouts and timetable slowly revealing themselves across each run.

In Colt's arsenal there's a bevy of weaponry, from silent nail guns to SMGs, as well as a helping of supernatural powers that should make Dishonored players feel right at home. There's a short teleport in the form of your Shift ability, while Aether renders you invisible to enemies and their turrets, Havoc allows you to soak up incoming bullets and then fling them back in one devastating volley, Karnesis is an analogue of old favourite the gravity gun that lets you toss enemies this way and that, while finally Nexus allows you to hook enemies together so that they might share the same fate. String three enemies together with Nexus and you'll be able to pop one head with a well-placed shot then see all three collapse headless to the ground, the ultimate in efficiency.

The multiplayer is one of Deathloop's most fascinating aspects, but it remains one of the more enigmatic. At the start of a mission you're given a choice to break the loop - which means playing as Cole - or protect it, which means playing as Julianna as you attempt to ruin another player's day. It is possible, of course, to opt out of such shenanigans if you want to play completely solo - though doing so could mean you're missing out on a lot of the fun.

There's more, too, in the form of trinkets that can be equipped in one of three slots that lend you different perks, whether that's more resilience or even a double jump, and of course there's the sticky question of how sticky that stuff is, and what persists from one run to another. While the world resets every day, and you're put back to the same starting point at the onset of each new loop, you do quickly unlock the ability to hold onto weapons and perks from one loop to another via an as-yet-undisclosed in-game doodad. There's also a resource known simply as Residium that feeds into all that, though how exactly it does so isn't clear right now.

Indeed, there's much of Deathloop that remains a mystery, the most recent preview experience limited - understandably, of course, given the current global situation - to a hands-off runthrough of the opening area and a quick sprint through a later level. It's here where Colt's powers are shown off to something approaching their full extent as he infiltrates a party held by Alexsis, one of the eight targets, being held in the heart of Updaam.

You don't get sent back to the start of a loop upon death - this being a video game, you've three lives each new day.

It's an intriguing place to see Deathloop up close for the first time, the verticality and claustrophobia of its streets and the seemingly endless warrens connecting them bringing Dishonored's Dunwall to mind - only this time out the action's got plenty more bark, and another influence springs up in the form of IO's superlative Hitman reboot, the clockwork mechanisms of guard patrols and behaviours of your mark there to be tinkered with at your own masochistic pleasure. If it all comes together, there's a wind-up murder playpen that could be every bit as devious as Agent 47's antics - and every bit as intricate in its design as Dishonored 2's famed clockwork mansion, only played out across an entire game.

And for all the external influences, from indies like Edith Finch through to hard-boiled 70s cinema, it always comes back to Arkane and its own exquisite back catalogue, be that Prey's sense of style and place or the near endless possibilities offered up by Dishonored and its follow-up - and even through to Arkane's abandoned The Crossing in Deathloop's curious multiplayer mode that allows players to take on the role of arch rival Julianna in any given mission and hunt down whoever's playing Cole across the course of a mission. It's the best of Arkane, essentially, with a few other new styles thrown in to keep things fresh, and if it can stick the landing there's every chance it could be Arkane's best yet.
Click to expand... 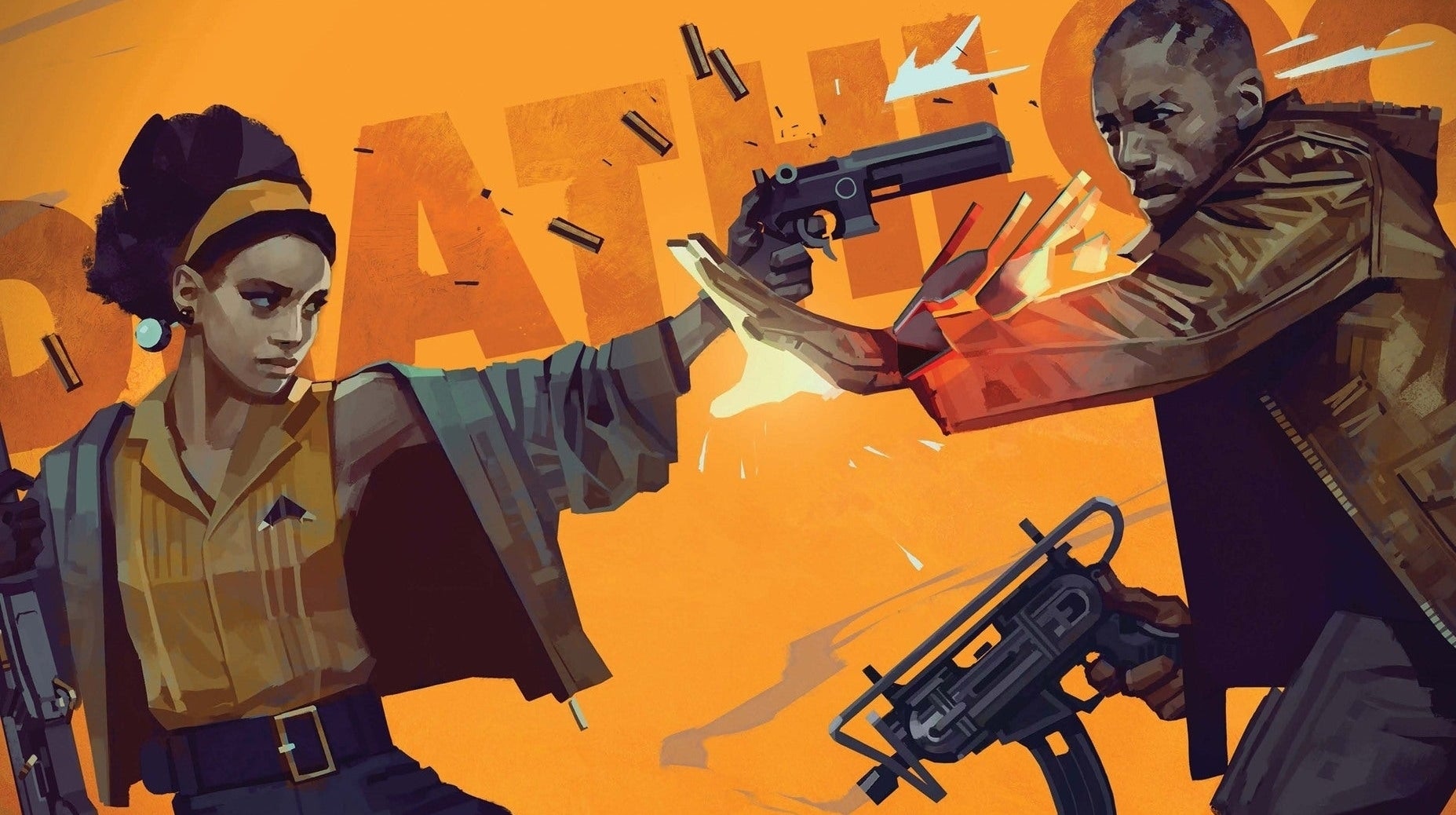 It's also basically the 2nd AAA roguelike, after Returnal. But kind of a mix of Majora's Mask and a roguelike. Definitely a strange set up for a game.

The latest trailers finally have me interested. The actual gameplay looks much better than the over the top teaser trailers.

Man these stupid ass titles. Holy shit. How does Dishonored with guns equal to Hitman? Dishonored already has guns and Hitman is a fucking stealth game where using guns is probably not a good idea or the proper way to play, at least no the first time. Nothing in Deathloop is similar to Hitman. When will you people stop following these journalists... sigh.

I thought DL was not a roguelike. At least some previews were very specific about that.

Entroyp said:
I thought DL was not a roguelike. At least some previews were very specific about that.
Click to expand...

I'm just going off the Easy Allies preview video I watched this morning.

That’s weird. Seems like different outlets are contradicting themselves.

"It's Arkane does Hitman".

So I think this game is gonna be rad, but also that it's.going to sell really badly because even reading a whole article about it it's sort of hard to understand.
You must log in or register to reply here.

Arkane games and the Sim Genre