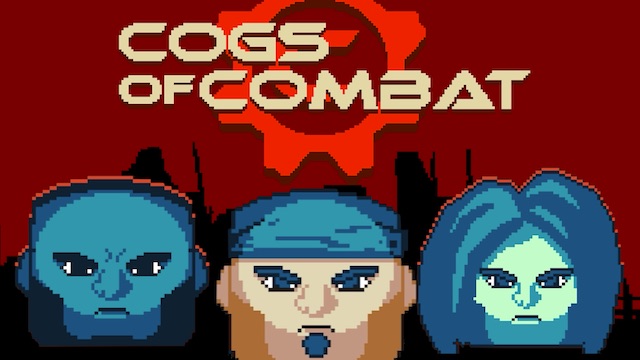 Created by hwilson (creator of Chess is Stupid and LOCUST, USA), Cogs of Combat is a fast and fun parody demake of Xbox cover shooter, Gears of War. In the game you join Marc Bird, Carbon Locomotive and the hilariously titled “Woman”, as they dodge between cover and blast the alien Cicada menace.

The gameplay in Cogs of Combat is simple, but challenging and a lot of fun. You auto-aim at enemies and automatically duck behind cover when you stop shooting. You can also dash between cover and hurl grenades. It’s best to keep moving between cover as it’s a good way of being able to five while evading bullets and there’s also the threat of enemy rockets that can hit you from behind cover.

The current prototype of Cogs of Combat only features three levels and can be played though in under five minutes, but it’s a lot of fun. The cover shooter gameplay is cleverly implemented, the retro pixel art visuals look great and the tongue in cheek parody of Gears of War is spot on. A well oiled retro machine.

Looks really similar to Metal Gear Solid on Gameboy Color.
You must log in or register to reply here.

IntentionalPun replied
Oct 14, 2021
I played and finished all the mainline Gears game in two weeks and i have some thoughts
2 3