Am I Missing Something? Shouldn't the Mafia I Remaster Make Us Optimistic About the Upcoming GTA Trilogy Remasters?

Haggard said:
accurately describes the level of your participation here.
Click to expand...

Yeah, cause you're contributing with so much knowledge

8BiTw0LF said:
Yeah, cause you're contributing with so much knowledge
Click to expand...

I'm correcting your nonsense.
If it wasn't for people like you dishing out pure stupidity with confidence i'd not write anything at all most of the time.
Last edited: Oct 12, 2021

Haggard said:
I'm correcting your nonsense. If it wasn't for people like you dishing out pure stupidity with confidence i'd not have written anything at all ...
Click to expand...

You're correcting nothing - cause you're wrong!

8BiTw0LF said:
You're correcting nothing - cause you're wrong!
Click to expand...

Please go and tell producers like blizzard with d2:r f.e. that only your definition is true and the official one isn't, because you say so. I'm sure your gifs will convince them that you are not just some stupid kid with about 4 hours of YouTube worth of software knowledge.....
Every single remaster ever using a new engine with legacy graphics option now has to be relabeled a remake because some idiot on a board says so......
Maybe if you write them from your imaginary phone which outperforms a PS4 ......
Last edited: Oct 12, 2021

Haggard said:
Please go and tell producers like blizzard that only your definition is true and the official one isn't, because you say so. I'm sure your gifs will convince them.
Every single remaster ever using a new engine with legacy graphics option has to be relabeled a remake now because some idiot on a board days so....
Click to expand...

Please tell me more.. Which Blizzard games? Is their remasters running on backwards compatible engines?

8BiTw0LF said:
That's the only way you can make a remake!

I've seen you espousing this nonsense up and down this thread. You are wrong. Your definitions are wrong. And your gifs are just making you look stupid, quite frankly.

coffinbirth said:
I've seen you espousing this nonsense up and down this thread. You are wrong. Your definitions are wrong. And your gifs are just making you look stupid, quite frankly.
Click to expand...

Oh, I see.. Thank you for enlightening me.

8BiTw0LF said:
Oh, I see.. Thank you for enlightening me.

Mafia was a full fledged remake. 2 and 3 however, were remasters.

I don't know what to expect with the GTA remasters, but I will say the bit where they wrote "the games will still maintain the classic look and feel of the originals" made me feel weird. If they're actually remakes, cool, they have my interest! If they're remasters, meh, they lost me.

Though I will admit the price tag and forcing everyone to go through the R* launcher is already gross to me.

8BiTw0LF said:
That's the only way you can make a remake!

Nope, they could literally remake the game inside the same engine, change assets, characters, gameplay.

Your definition of remake is limited to moving engine which is bizarre. A game can be remade in the same engine if they change story beats, characters and make other sweeping changes to the way the game looks and plays. None of that requires engine migration.

Just because Rockstar are using Unreal 4 doesn’t make the game a remake, it means they are likely porting all of the assets over to a new engine in order to tweak them, I.e a remaster.

If you honestly think Rockstar are remaking these games, you’re just setting yourself up for disappointment. Either way, if you want to believe that moving engine is remaking something that’s fine. Whatever helps you sleep at night buddy.
D

justiceiro said:
This thing has red flags all over it. First trailer didn't had footage. Old versions will be removed just before launch. They literally ported 3 games to over 5 plattaforms in a little more than 3 years while still doing a engine change in the process made by a just acquired studio. How? It simply doesn't add up
Click to expand...

Gamezone said:
Mafia was a remake, isn't. GTA Trilogy is also releasing on mobil phones, which is a huge red flag.
Click to expand...

What does the mobile version mean, and will content be affected

I'd be optimistic on the trilogy if they had bothered to show us something indicating the level of improvement/work that went into these.

Sadly, I have no optimism whatsoever.

They’re going to be released on phone, m8.

is that asking too much? 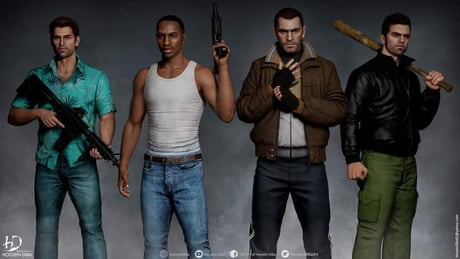 You followed that up with a really grown up post, well done.

Vier said:
Too much pessimism, I agree.
These GTA remasters will be the best thing Rockstar has done for close to a decade.
Click to expand...

No but Midnight Club should be.

Inuteu said:
I whish they at least look like GTA 5

is that asking too much?

Well, OP got their answer I hope.

The controls will be affected,new bugs would be introduced and the game would look like shit. And wow all 3 things happened.

Mafia 1 was full remake, remake and remaster is diffrent beast.

Ya - my optimism in creating this thread has clearly been extinguished by reality.

I love the Mafia 1 remake, but the whole GTA thing is like a semi-remake of 3 games vs 1 game fully 100% remade, I don't think anyone should have ever even been making that comparison knowing that even the rumor at the time stated they'd come in a collection, as in clearly its not a remake just be hearing that its obvious thats not what GTA trilogy was going to be. (Not for $60 anyway lol)

I think Rockstar North might want to do a remake of GTA 3 or VC themselves vs giving it ot Grove Street.

At the least with something like this we get the best of both worlds.

The remasters for those who want the classics, the semi-remakes for new gamers or those who want to replay them with GTA V controls and better models, lighting etc. If they want to make a remake of GTA 3 in the future, at least we'd have several options so folks can stfu over this shit. So many options exist to play this series now, I'm shocked how many are crying over some shit they don't need to play.

Play the PS2 ones folks if you want it 1.1 and exact
Play the PC mods if you disagree with the remakes
Play the PS3 or PS4 ports if you want some tweaks to performance while keeping the vibe the same with a PS controller
Play the PS4/PS5 remakes if you want GTAV controls with better lighting, models, textures etc

or wait till a better remake comes out of 1 of them as I'm sure when that shit happens, its not going to fucking be no $60 for 3 games, it will be 1 game for $70 and we can see the tears all over again by a different group, like "woooooow how come its not 3 remakes for the price of 1?" and or "OMG they made GTA 3 look like GTA 6 thus ruining da feels, look, vibez" etc. lol Folks will find some shit to cry about.

I'm happy we get anything done with those older games that brings them up to date for many, keeps the old art direction and allows a new generation to play those classics.

Bluecondor said:
Ya - my optimism in creating this thread has clearly been extinguished by reality.
Click to expand...

DeepEnigma said:
Mafia 2 would have been a better comparison... but again, R* and their performance the last few years.
Click to expand...

Update: He was in fact missing something.

Only if you include the Switch version.
I don't.

Though im enjoying San Andreas, we ended up getting a game that looks like I made it.

Max Payne’s Baretta said:
Though im enjoying San Andreas, we ended up getting a game that looks like I made it.
Click to expand...

. you're asking too many tough questions sir.

Vier said:
Only if you include the Switch version.
I don't.
Click to expand...

That would make Blue Point Team Ico games "halfmakes" or "extramasters" seeing they use 1.5 engines (or something)..

LOL - my only defense is that my optimism was based on a (flawed) assumption that the GTA remasters would be on par with the Mafia I remaster/remake.

As the old saying goes, "When we assume, we make an ass of you and me."

Punished Miku said:
Update: He was in fact missing something.
Click to expand...

Ya - I was apparently missing the (very real) likelihood that Rockstar was way more interested in a cheap and low effort cash grab, than actually putting some effort into the remaster like we saw with Mafia I.

I'm the video game equivalent of the kid who believes that his best friend actually has a hot girlfriend who no one has ever met because she "lives in Canada."
Last edited: Nov 13, 2021

Another wing I guess.

We need optimism from time to time, especially this community. Gaming has been rough for so many of us enthusiasts lately that it can become all doom and gloom. Thanks for breaking that up a bit. Plus, situations like this give us all a needed laugh amidst the chaos.
Last edited: Nov 14, 2021

Yoboman said:
They will retexture the main characters face and you'll be happy they did that much
Click to expand...

Mafia remake ruined Tommy by making him a rough gangster which he never was. The new music and shooting were terrible too.
but at least it looked good and was a fun game on its own
You must log in or register to reply here.