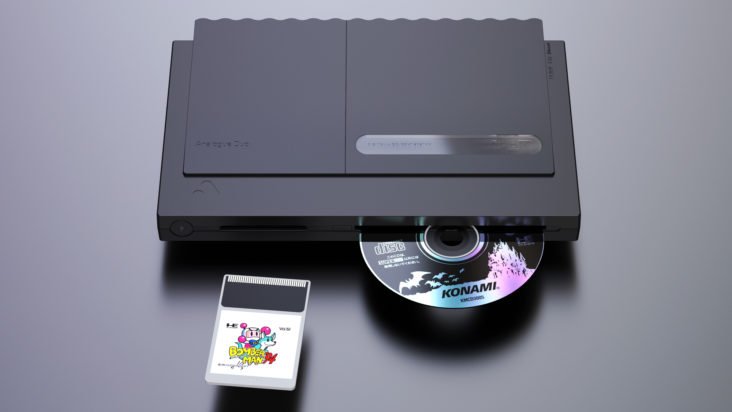 After resurrecting some of the most popular classic consoles of the ‘80s and ‘90s including the NES, Super Nintendo, and Sega Genesis, the team at Analogue is turning its attention to reviving a lesser known family of systems in the annals of retro gaming. If consoles like the TurboGrafx-16 still remain close to your heart, then the new Analogue Duo might be of interest.

If you’re unfamiliar with the TurboGrafx-16, the TurboGrafx-CD, or even the SuperGrafx, it’s not that surprising. In the ‘80s NEC was a brand known mostly in Japan for its personal computers, but after the success of Nintendo’s first console the company decided it wanted a piece of the home console market as well. It partnered with a video game publisher called Hudson Soft who brought an expertise in gaming to the partnership and together the two companies created the TurboGrafx-16, also known as the PC Engine in Japan, to capitalise on what NEC was already known for.

Although technically powered by a modified 8-bit CPU, the TurboGrafx-16 is considered the first 16-bit console and when released in 1987 in Japan it was quite successful, giving the NES, and eventually the SNES, some real competition. In North America, the story was a bit different. The TurboGrafx-16 arrived just as Nintendo was heavily promoting the forthcoming arrival of the Super Nintendo and while it was available almost everywhere the competition was, few of us remember anyone actually owning one. 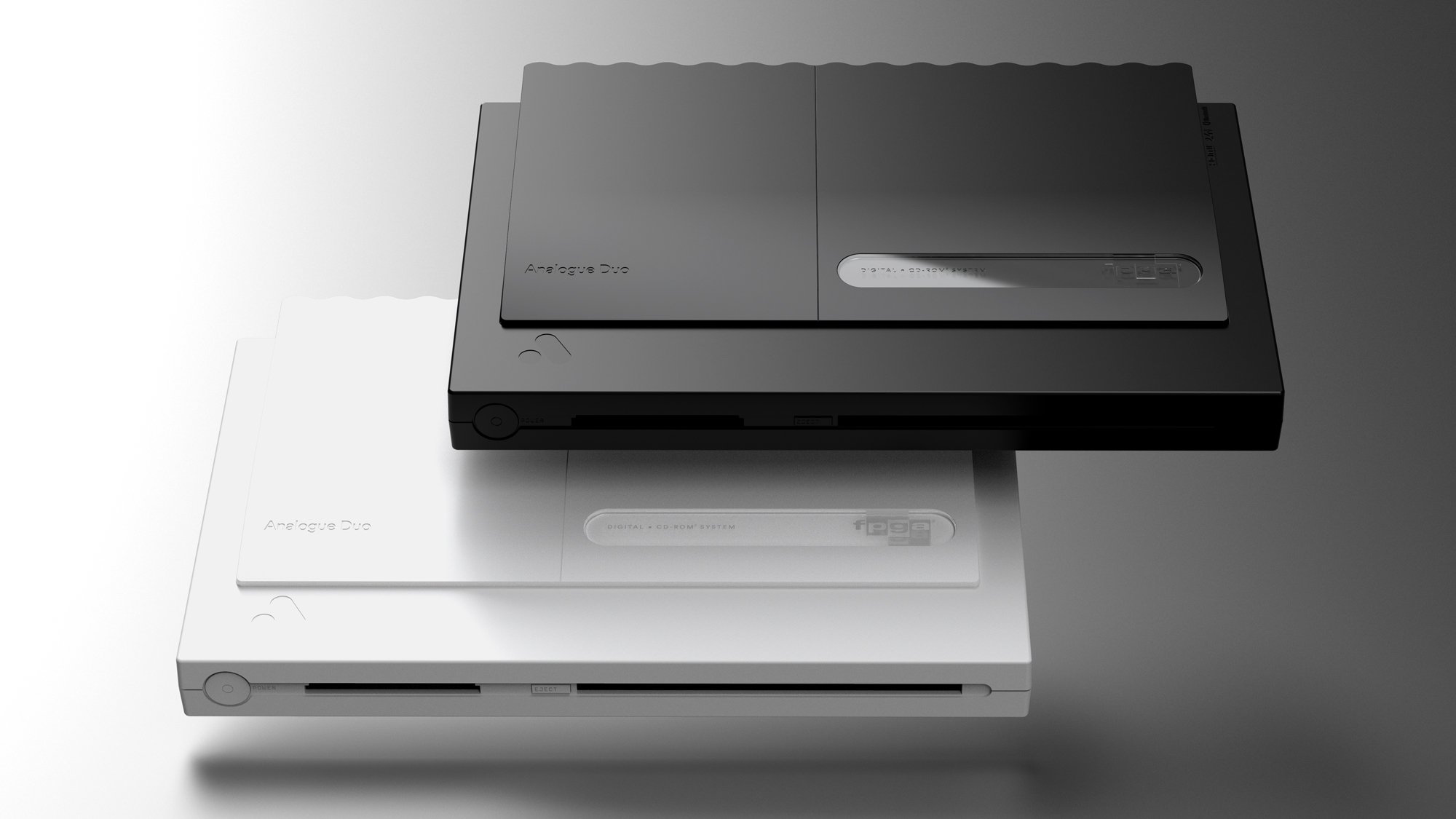 Konami, who ended up buying Hudson Soft, released a miniature all-in-one version of the TurboGrafx-16 packed with over 20 games (the number varies based on the regional versions) earlier this year, but those are fine if all you’re interested in is some bite-size nostalgia. For those who truly miss the TurboGrafx-16, and still have stacks of HuCards (NEC’s cartridge format) and CD-ROMs buried in a drawer somewhere, Analogue is bringing the console back from the dead with a clone that not only works well with modern TVs, but probably outperforms the original.

As with Analogue’s past creations, the new Analogue Duo is powered by an Altera Cyclone V FPGA (Field-Programmable Gate Array) which is a customisable chip programmed to function exactly like the processors and graphic chips in the original TurboGrafx-16. Most mini consoles rely on software emulation, but Analogue’s approach ensures that every single game ever released for a given console plays perfectly on the replicated hardware — and sometimes even better. In addition to the original TurboGrafx-16, the Analogue Duo can play games from the SuperGrafx (an enhanced version of the TG-16), and the TurboGrafx-CD as its design is loosely based on the NEC TurboDuo (introduced in North America in 1992) which merged the TurboGrafx-16 and the TurboGrafx-CD into one unit with slots for both cartridges and CDs. 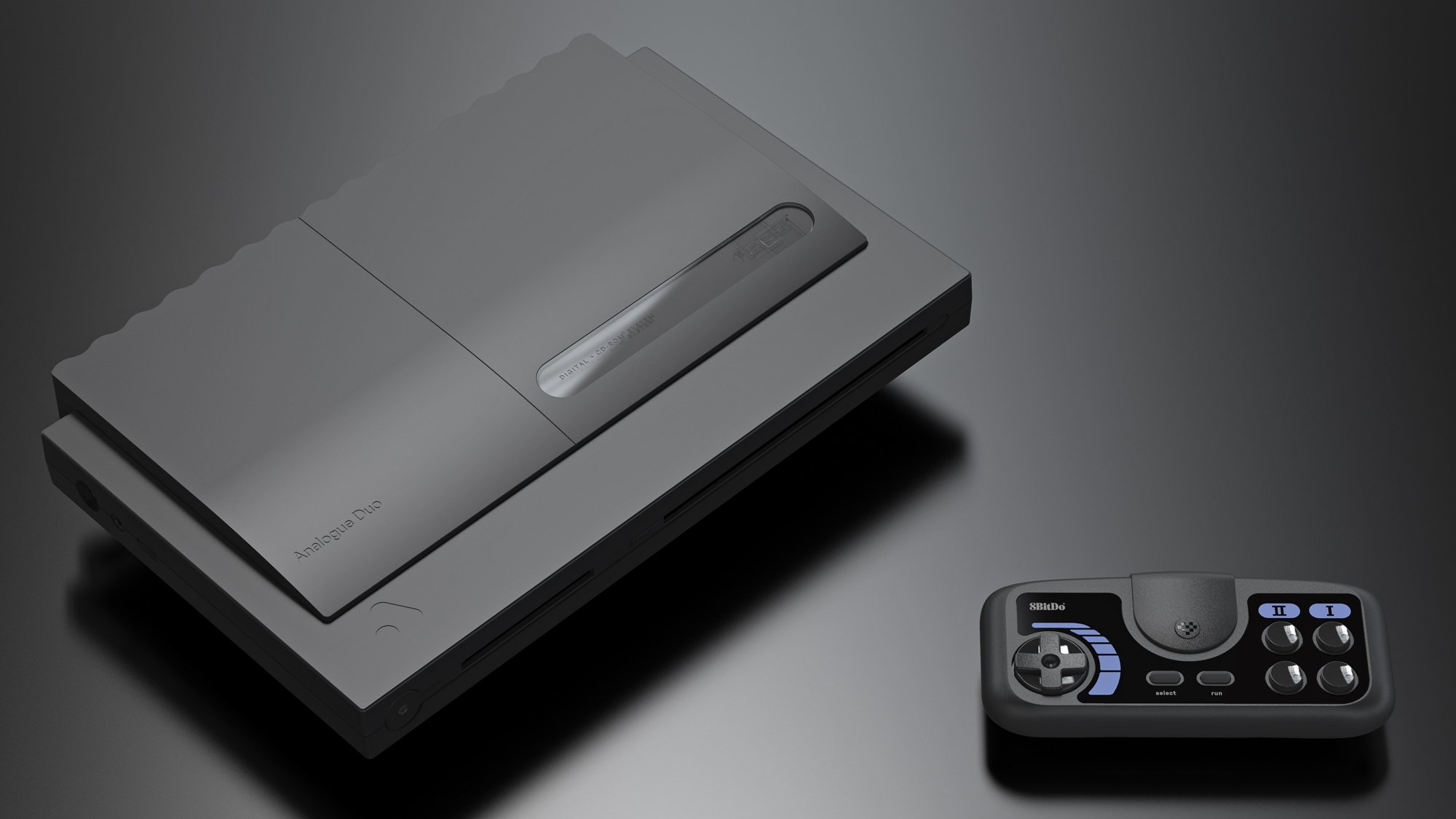 One of the best features of the new Analogue Duo is that in addition to an original TurboGrafx-16 port and USB for connecting wired controllers, the new console features both Bluetooth and wireless 2.4GHz connectivity built right in so up to four controllers can easily be connected without the need for wrangling dongles or having to first connect a wireless receiver to one of the console’s ports. Analogue expects the Duo to arrive sometime in 2021 and it will launch with a $US200 ($283) price tag, although that doesn’t include the matching wireless controller from 8BitDo. 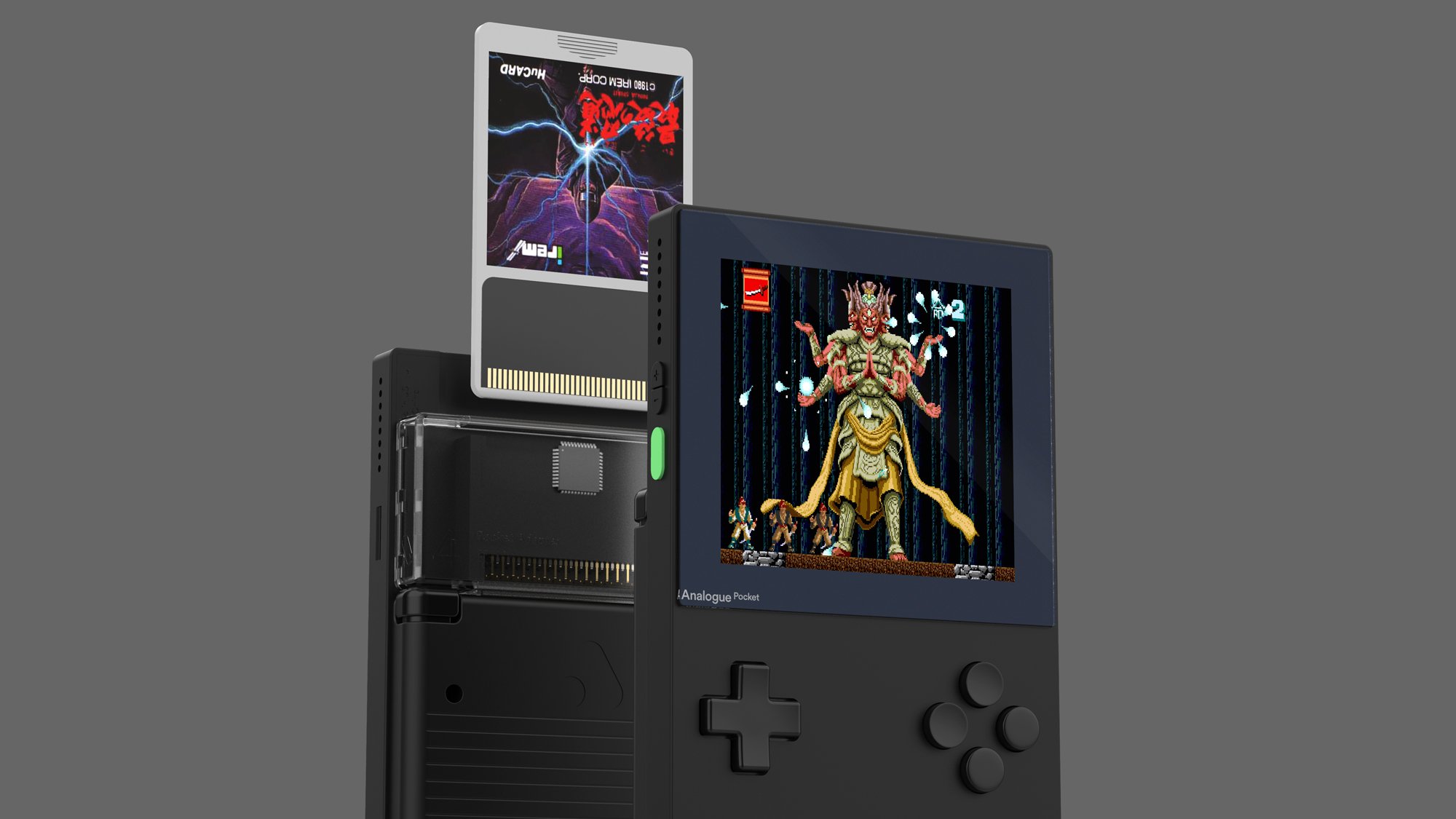 One of the more interesting pieces of gaming hardware NEC released was the TurboExpress Handheld Entertainment System. Unlike the original Game Boy, or even the Game Boy Advance, the TurboExpress played the exact same games as the TurboGrafx-16 did by natively loading the console’s HuCard cartridges via a slot in the back of the portable. As handheld consoles go, the TurboExpress was well ahead of its time with a colour screen and 16-bit graphics, and an experience that Analogue plans to recreate with its own portable gaming machine: The Analogue Pocket.

It is also slated to arrive sometime in 2021 and will have a cartridge adaptor available allowing it to natively load and play games from TurboGrafx-16 HuCards, just like the original TurboExpress did. That includes games compatible with the enhanced SuperGrafx console too, but not the TurboGrafx-CD given the Pocket’s lack of a disc drive. It will be priced at just $US30 ($42) which means that if you’ve already pre-ordered the Analogue Pocket the cartridge adaptor could be a much cheaper alternative to the Analogue Duo for enjoying classics like Bonk’s Adventure, R-Type, and Splatterhouse again.

That's a sexy bitch.
Reactions: Tschumi, Devilich, lachesis and 12 others

Looks really cool, but I lost some respect for them with the way they bungled the Pocket.
Reactions: NeoIkaruGAF, Spukc and Nymphae

Analogue is really killing it. Like usual I'll pass though since PCE is already flawless for MiSTer FPGA. Going to get the Pocket for sure.


diffusionx said:
Looks really cool, but I lost some respect for them with the way they bungled the Pocket.
Click to expand...

parathod said:
What happened with the Pocket? The delays?
Click to expand...

Delays, the overpriced accessories, and the disaster preorder that made Nvidia's look orderly.
Reactions: Walter Matthau

I also think it's good that they're offering a TG-16 cartridge adapter for the Analogue Pocket. That adapter will enable the system to function as the modern-day equivalent of the TurboExpress.

I was so soured on this company after how they handled that Pocket launch. Not giving them a dime.
Reactions: diffusionx

That said they make some absolutely incredible products. Frustrating but nobody else is competing in the market.
Reactions: NeoIkaruGAF

Nymphae said:
I was so soured on this company after how they handled that Pocket launch. Not giving them a dime.
Click to expand...

The communication was piss poor from the get go, then after they announced the date that you could try for a preorder, everyone was there waiting day of and shit got messy. Many people who had waited for a very long time to order one of these things were fucked out of one at checkout for whatever reason, I had one in my cart and the page was spinning on the shipping options, once it loaded I was informed it was sold out. They allowed 2 per purchase and scalpers immediately had these things up on Ebay, excited handheld enthusiasts were left waiting for another email to let them know when they could try to line up again!

Fuck off, it's a preorder. Take my money & give me a number, ship it when it's ready. I'm not playing these games for a $400 gameboy order.
Last edited: Oct 16, 2020
Reactions: YOU PC BRO?!, NeoIkaruGAF, Chittagong and 1 other person

That said they make some absolutely incredible products. Frustrating but nobody else is competing in the market.
Click to expand...

the only thing worth from these guys is the pocket.

the only thing worth from these guys is the pocket.
Click to expand...

Mister is neat. I am working on a Retro OT and want to include all of that info in the OP.
Reactions: NeoIkaruGAF

Not going to buy anything else before they get the Pocket orders and deliveries going.
A

Cool but im good with the Pocket.
I

Awesome. I have the Super and Mega. I don't think it'll get this one just because I don't have any nostalgia for it but I love the design and the fact they put a CD drive on it.

I just wish they would release a cheaper/plastic version of the NES at this point.
K

diffusionx said:
Looks really cool, but I lost some respect for them with the way they bungled the Pocket.
Click to expand...

how did they bungle it?
E

Too bad this company is even worse than limited run games at this point.

Great writeup. I wish more people gave the TG16 a try. I'm still discovering new games on it that are worthy of a modern gamer's attention. It has it all: RPGs, platformers, racing games, even a bunch of shmups.
Reactions: Laconian Sword

I love the idea of these FPGA systems, but I just know I’d never use them as much as I like to think I would.

The NES Analogue with actual analogue video out was the best way to go about this, but the design was atrocious and the thing just too fucking expensive. SNES and MD I considered, but if there’s only HDMI out then I have plenty of options to play old games on flat screens. I understand these things are better than emulation, but when I think I’d end up playing ROMS anyway, it just doesn’t seem worth it.

I was tempted by the Pocket but the preorder disaster solved that temptation for me, lol.

PC-Engine is something I’d very much like, but if the MiSTer is there already, then no reason. I’d actually want some complete, understandable information about that one. I like retro gaming - I just don’t like it so much that I’d invest in the entire Analogue lineup to play games that I could much more easily emulate anyway.

Pissed I missed out on the Pocket. Dont care about this , but good luck to those that want one

Any chance of this impacting the prices of second-hand PCE games, according to you ?


SlimeGooGoo said:
We need a Saturn one
Click to expand...

We are still missing a SH-2 core, apparently

Loved Bonk's Adventure. Remember wanting this console so badly at Radio Shack when I was a kid.

I don't think I have enough TG16 games to justify getting this (I have an original TG16 and CD instead).

However I am very interested in the Pocket add-on since I did get one preordered last month and always wanted a Turbo Express as a youth...

What are the chances of a normal bloke getting one of these? I heard that Analogue only manufactures extremely small batches.

Looks great, but these games were before my time.. our family skipped the 90s, in terms of computers... if they can put my old Pentium 2 in a gameboy with an hdmi port to play age of empires on my tv we might be in bidniss!
Reactions: lock2k

Vier said:
What are the chances of a normal bloke getting one of these? I heard that Analogue only manufactures extremely small batches.
Click to expand...

Very low chance. Scalpers will probably gobble the rest. It sucks. I love the design of their products, but I hate their business model. I get that they're a small shop, but it seems they use pre-orders as mini KickStarters. I don't like that at all.
Reactions: Vier
J

entremet said:
Very low chance. Scalpers will probably gobble the rest. It sucks. I love the design of their products, but I hate their business model. I get that they're a small shop, but it seems they use pre-orders as mini KickStarters. I don't like that at all.
Click to expand...

I had gotten both the Super NT (Super Nintentendo) and the Mega SG (Sega Genesis) with little to no effort. From what I have seen is that they start out with limited stock and then later the stock increases for a bit till they stop selling entirely. I can't say this will be easy to get but in my experience it hasn't been to bad.
Reactions: diffusionx
You must log in or register to reply here.