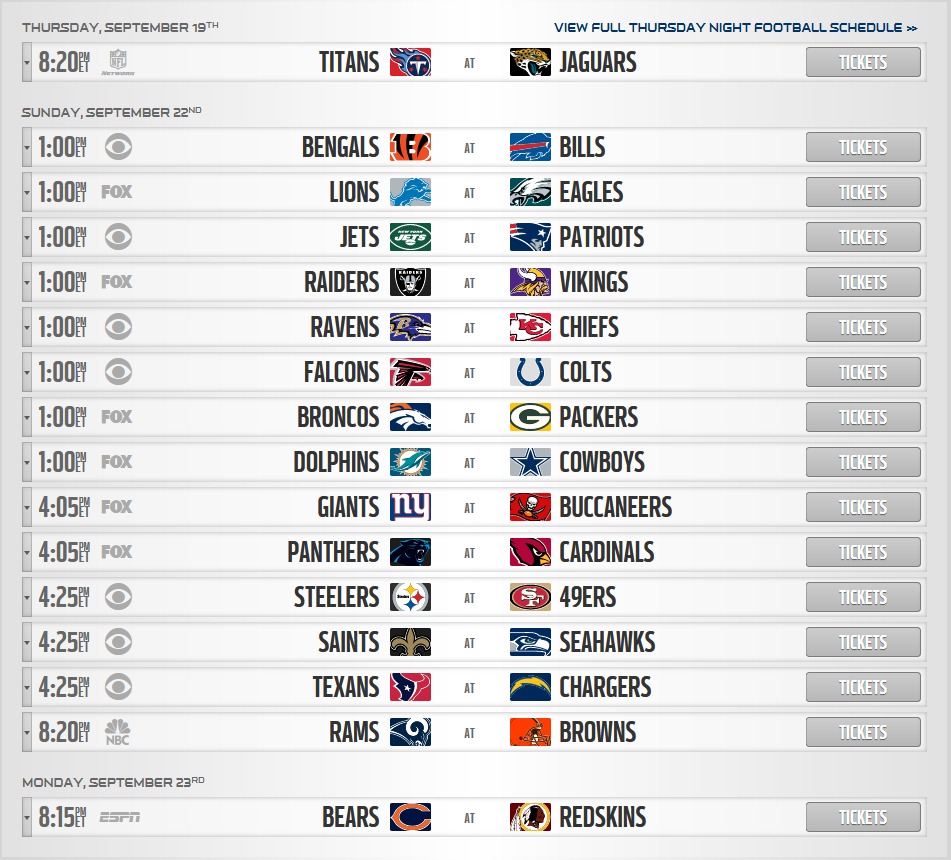 Titans over Jaguars - Jacksonville hung tough last week but I like the Titans to take this one.

Bills over Bengals - Cincinnati is a mess, easy win for Buffalo.
Lions over Eagles - Philadelphia is the stronger team on paper, but they are thin at WR due to injury. I like Detroit in an upset here.
Patriots over Jets - New England keeps rolling even without AB (not that they really need him).
Vikings over Raiders - Minnesota bounces back after the tough loss to GB last week.
Chiefs over Ravens - Best matchup of the week, I don't see Baltimore unlocking the secret to slowing down Mahomes.
Colts over Falcons - Good win for Atlanta last week, but I personally think the Colts are a bit underrated at the moment. I think they win a close one.
Packers over Broncos - I think I've picked against GB every week, so let's try to jinx them here. On a serious note this game will tell a lot about the Broncos' resiliancy under their Fangio. A road win after last week's heartbreak could save their season.
Cowboys over Dolphins - It's Rosen time in Miami, but man these are pretty tough circumstances for him. Hopefully he doesn't get beat up too bad in a game that likely won't be close.
Buccaneers over Giants - New QB for the Giants as well, this pick is more against NY than any confidence I have in Tampa Bay.
Panthers over Cardinals - All signs point to an Arizona victory with Cam Newton being out, but I think the Panthers pull off the upset here.
49ers over Steelers - Big test for the 49ers in a game they're heavily favored. Pittsburgh lost Big Ben last week - this season may be lost for them already.
Seahawks over Saints - I feel like I"m talking about a QB injury in every game this week. I don't see the Saints taking out Seattle on the road without Brees.
Texans over Chargers - Good start to the season for Houston - I'll take them in a minor upset.
Rams over Browns - Good win for Cleveland last week, but I don't think they can keep up with the talented Rams.
Bears over Redskins - Washington's season is basically on the line here so they should be highly motivated to win. If the Bears offense can't take advantage of the Redskins defense this is going to be a painful season for Chicago.

Bills over Bengals - Toss up Pick
Eagles over Lions - Eagles are good. Lions are the Lions.
Patriots over Jets - This is going ot be a stinky and smelly one Patriots have to wash their jerseys after this one. They're going have to take out the literal trash that is the Jets.
Falcons over Colts - Matt Ryan should be able to put up nice stats, but I wouldn't be surprised if this one is down to the wire.
Chiefs Over Ravens- It's gonna be tough for either team to win. Chiefs have the advantage, but the Ravens are a tough and extremely talented team.
Packers Over Broncos - The Broncos can win this one if Rogers books passage on the short bus and completely throws the game away.
Cowboys Over Dolphins - It's not a question of whether or not the cowboys can win by 40 or more. It's more a question of whether or not the Dolphins should be allowed to play anymore this season. Enough Dolphins fans are under 24/7 suicide watch already.
Buccaneers over Giants - WInston should have one of those games where he puts up huge numbers and makes the Giants team cry with the exception of Eli who has the facial expression of a man who looks like he lacks any cognitive function or awareness.
Panthers Over Cardinals - Even Cam should be able to beat the bottom feeder Cardinals.
49ers over Steelers - The 49ers are actually a good team...for right now at least. The Steelers are a top three draft pick favorite. Regardless of that fact, the Steelers do have a chance to win.
Seahawks Over Saints - This should be a gimme for the Seahawks, since the Saints will be playing without a quarterback this week. Seriously. The #2 QB on the Saints Depth Charts was a can of pringles that someone ate.
Chargers over Texans - Either Rivers plays badly enough to keep this a close game or else he actually plays as well as he normally should and make this a two score win. JJ Swatt continues to cry in private being the only good player on the Texans again.
Rams Over Browns - Rams, A legit powerhouse and superbowl contender. Browns. Overhyped. Either they're fighting for a wild card spot at seasons end or continue their yearly tradition of being a gigantic dumpster fire that everyone expects.

If you don’t have fantasy implications or money on the game, tough watch most likely. I like the jags though to win

Antonio Brown has been released by the New England Patriots

Wow - this has got to be the end of his career.

Broncs have a tough matchup on the road in Green Bay. I think our Milk Carton Kids (Chubb and Miller) finally show up and we finally get a sack and a turnover but I see us falling short, 24-17

Bengals over Bills - this offense is finally exciting after decade of boring Marvin Lewis led teams, I think they outlast the Bills

Eagles over Lions - I think the Lions are better than people think, this is closer than I think most people want to believe

Patriots over Jets - Luke Falk against the Pats? LMAO

Colts over Falcons - Falcons suck. People like them because they have big fantasy names, guys who put up stats, but they are not a good team and I think the Colts are underrated

Chiefs Over Ravens- This is gonna be a super high scoring shootout. Game of the week. Do not start either defense in fantasy

Cowboys Over Dolphins - Dolphins are basically a college team, they look absolutely awful. Cowboys TOP 3 team in the league

Giants over Buccs - I trust Daniel Jones more than I trust Winston. That's a huge insult to one of those guys.

Cardinals over Panthers - Kliff and Kyler get their first win. Cam looks like one of the worst QBs in the league, looks absolutely awful, from what I hear he might not even play this week

49ers over Steelers - The 49ers are a sneaky contender this year

Seahawks Over Saints - The Seahawks are a sneaky contender this year

Texans over Chargers - Texans are just a better team IMO, Chargers offense is banged up

Rams Over Browns - I don't believe in the Browns. .That o-line is absolutely awful

Not picking Bears because Greyshark is my mortal enemy
Last edited: Sep 20, 2019

Picks are in - with the Bears not playing until Monday, I'm not sure which game I'll watch tomorrow. Maybe Ravens/Chiefs, or see if the Broncos can take out Rodgers.

Gutsy call by Baltimore - I would have taken the FG. Big drive and TD to start the game.

Our best run of the season called back by a holding penalty? No WAY!

I knew the Cowboys were gonna fuck around and let the Fins have a game :/
Reactions: JareBear: Remastered

Big stop for the Ravens on 4th down - might make a game of this after all.

Garappolo was secretly traded to the Steelers for this week it seems. Yes. Hand the game to the bottom feeder Steelers.

Barkley hurt and the Giants are still coming back.
Reactions: prag16

This game is so frustrating to watch. CMON BUCS why did you have to take a solid lead and dump it down the drain?!

I like the more intimate and small gaf, but I wish the nfl thread was more alive . Need more Packer fans.

WOW ARE YOU KIDDING ME?!
THIS IS ATROCIOUS
Reactions: JareBear: Remastered

Pagusas said:
I like the more intimate and small gaf, but I wish the nfl thread was more alive . Need more Packer fans.
Click to expand...

I can talk endless shit about the Packers if you’d like - on the one hand we’d have more activity, and on the other you’d get to gloat as they dominate the division en route to a 12-13 win season. Everybody wins (except the Bears)!

EDIT: Holy shit at that ending to the Giants game - sorry

I had to leave to house I was so pissed
Reactions: JareBear: Remastered

49ers go to 3-0 despite playing as fucking shitty as you can. 4 or 5 turnovers. I don't remember. This game should have been a 40+ to 14 blowout. The steel curtain should have been used by those in attendance to wipe their asses, because it's made of paper and not steel.

The 49ers didn't deserve to win that game. The steelers should have won. They suck, but even they should have been able to win with so many gimme turnovers by the niners.

After the game, Emmanuel Sanders said the Broncos are "living in a World of Suck."

I used my name change too soon. World of Suck is pure gold.

It's one game. But Daniel Jones certainly looks the part. Not exactly a resounding triumph of a win, but I'll take what we can get. Washington also sucks, so could be 2-2 in a week. (But after that, despite getting back Golden Tate, he could get killed against Minnesota and New England.)

I don't necessarily think the Bucs have a terrible team. But they'll never go anywhere with Winston. Ever. He wasn't necessarily the problem today, but he personifies QB hell. And I can't believe they've kept him around this long.

The Falcons almost came back.

Great performance by the Bears D against a terrible team. Trubisky showed flashes but overall still did not look good. This team won’t get to play bottom feeders all season
You must log in or register to reply here.