33% The Nutcracker and the Four Realms

43% The Girl in the Spider's Web: A New Dragon Tattoo Story 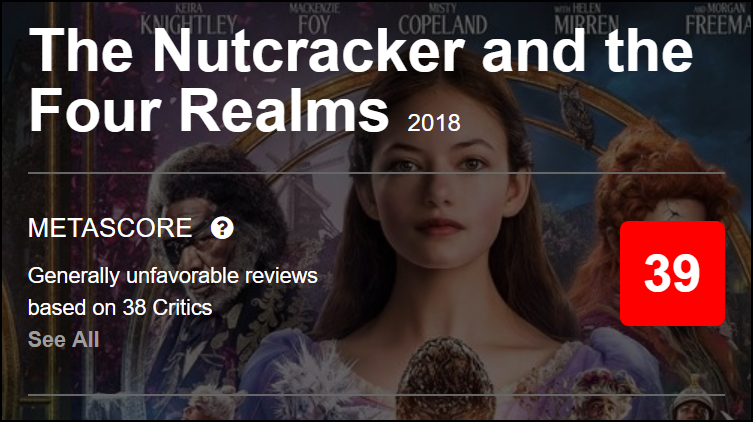 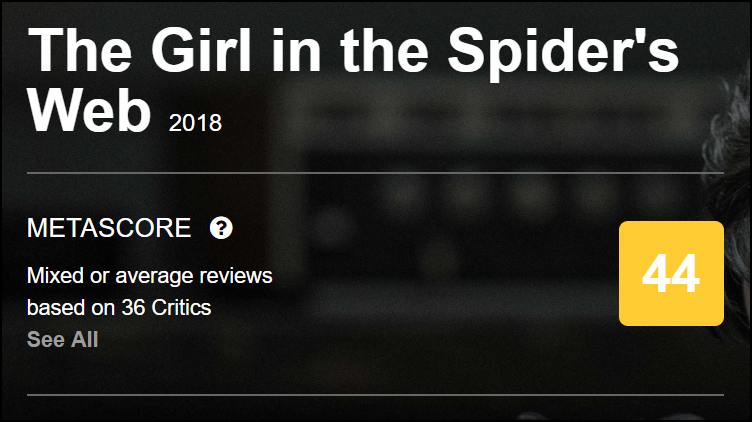 “The Grinch” proved it’s never too early for some holiday cheer as the animated family flick stole the weekend box office with $66 million from 4,141 locations.

Illumination and Universal’s adaptation of the Dr. Seuss holiday tale now ranks as the best start for a Christmas film. Benedict Cumberbatch voiced the animated green grouch in “The Grinch,” which cost the studio $75 million to make. While it trails the start of Illumination’s latest Dr. Seuss story “The Lorax” ($70 million), “The Grinch” should benefit from the holiday corridor.

Newcomers “The Girl in the Spider’s Web” and “Overlord” weren’t able to best “Bohemian Rhapsody.” Fox’s Queen biopic showed staying power with a solid $30.9 million in its sophomore frame, representing a drop of just 41%. That brings its 10-day domestic total just shy of $100 million.

Paramount’s “Overlord,” produced by J.J. Abrams, was able to nab third place, opening with opened with $10 million from 2,859 theaters.

It hasn’t been all Yuletide joy at the box office. In fourth, Disney’s “The Nutcracker and the Four Realms” slipped over 50% in its second weekend with $9.6 million to bring its domestic total to a disappointing $35 million. The studio is banking on its overseas run to justify the family film’s pricey $125 million budget. Globally, “Nutcracker” has made $96.7 million, including $61.4 million internationally.

Meanwhile, “The Girl in the Spider’s Web” might not even crack the top five with a bleak $8 million. Sunday estimates show Warner Bros.’ “A Star Is Born,” now in its sixth weekend, also generated $8 million this weekend. The final order won’t be determined until official numbers come in on Monday morning.

Though “Spider’s Web’s” debut was in line with the studio’s projection and not far behind the start of “The Girl With the Dragon Tattoo’s” ($12.7 million), the second film in the Millennium series doesn’t look like it will have the same legs as David Fincher’s original film. Fede Alvarez directed “Spider’s Web,” which was budgeted at $43 million. Co-produced by Columbia, MGM, and New Regency, it cost significantly less to make than “Dragon Tattoo,” however that film played strong throughout the holiday season and went on to earn a huge $102 million stateside and $230 million worldwide.

Among arthouse releases, Sony’s “The Front Runner” with Hugh Jackman launched in four locations on Tuesday to coincide with the midterm elections and picked up just $76,000 through Sunday. 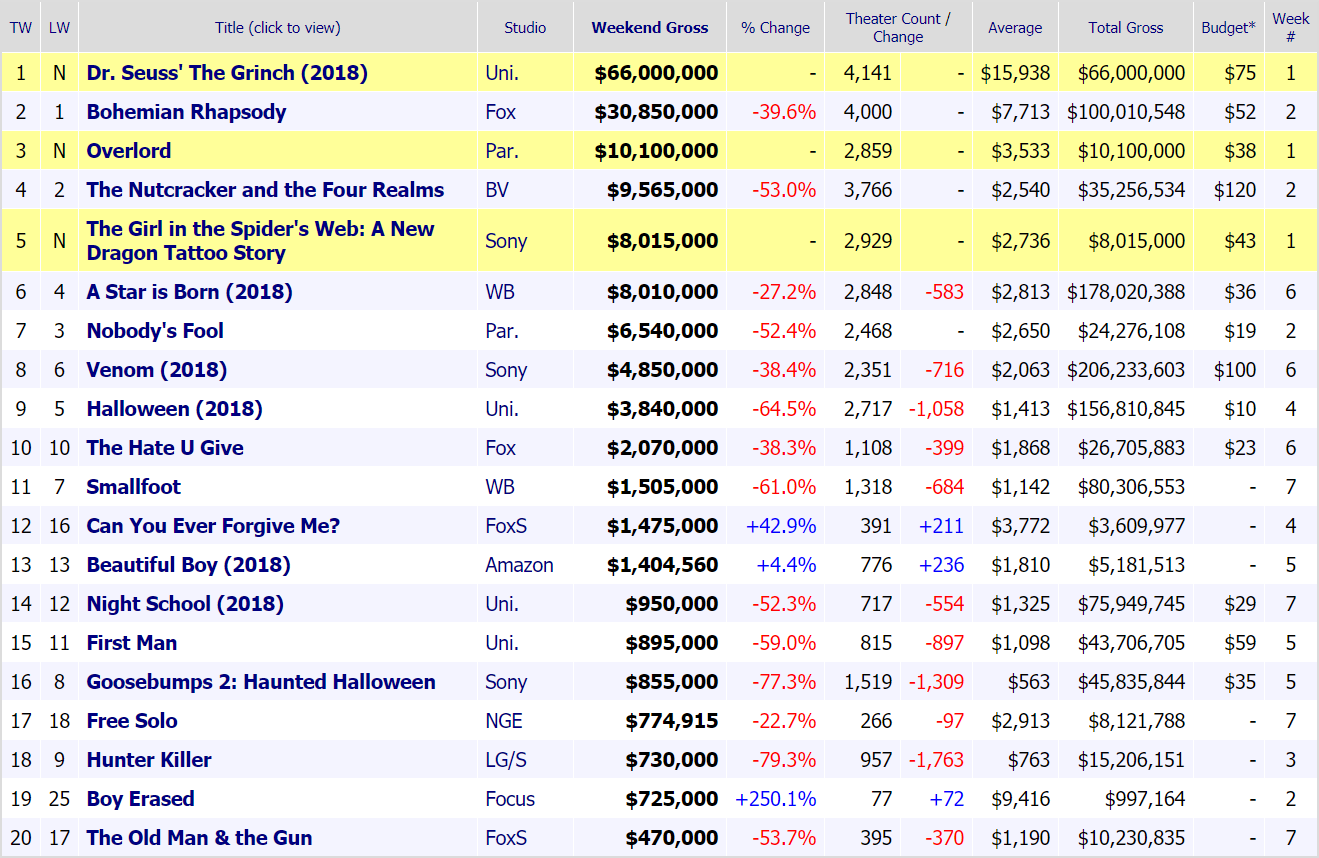 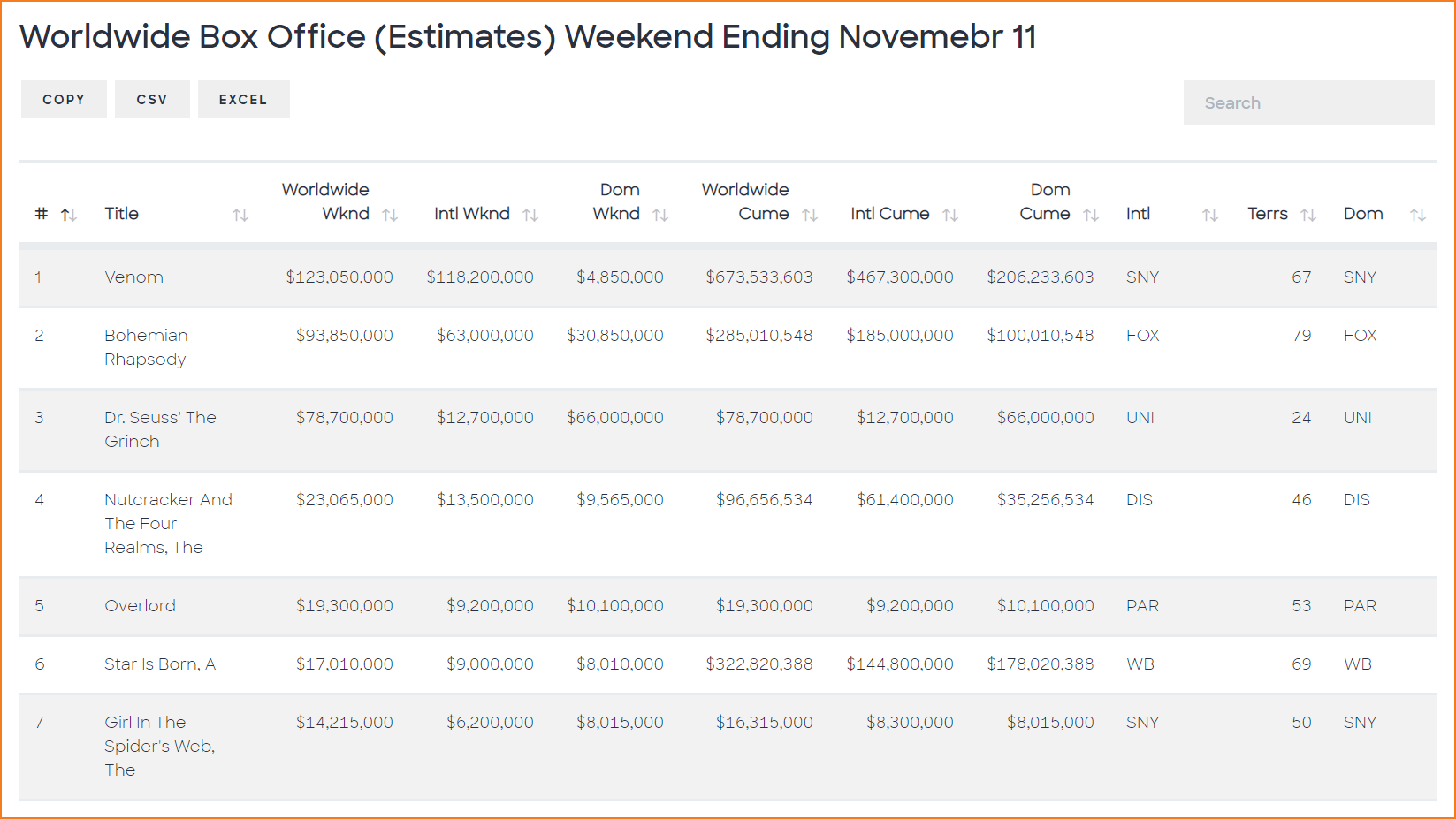 *click pic for full list/source*
Last edited: Nov 12, 2018
You must log in or register to reply here.