Which is the best 6th generation GTA ?

Now with the upcoming release of the GTA remasters, it's crystal clear that this is one of gaming's apex series, which made it's mark in the sixth generation with the iconic release of GTA III in 2001. Then, in 2002 we got the adorable Vice City and in 2004, the incomparable San Andreas.

These three games - III, VC, and SA are all critically acclaimed but the question is,
Which one was your favorite sixth generation Grand Theft Auto game and why? 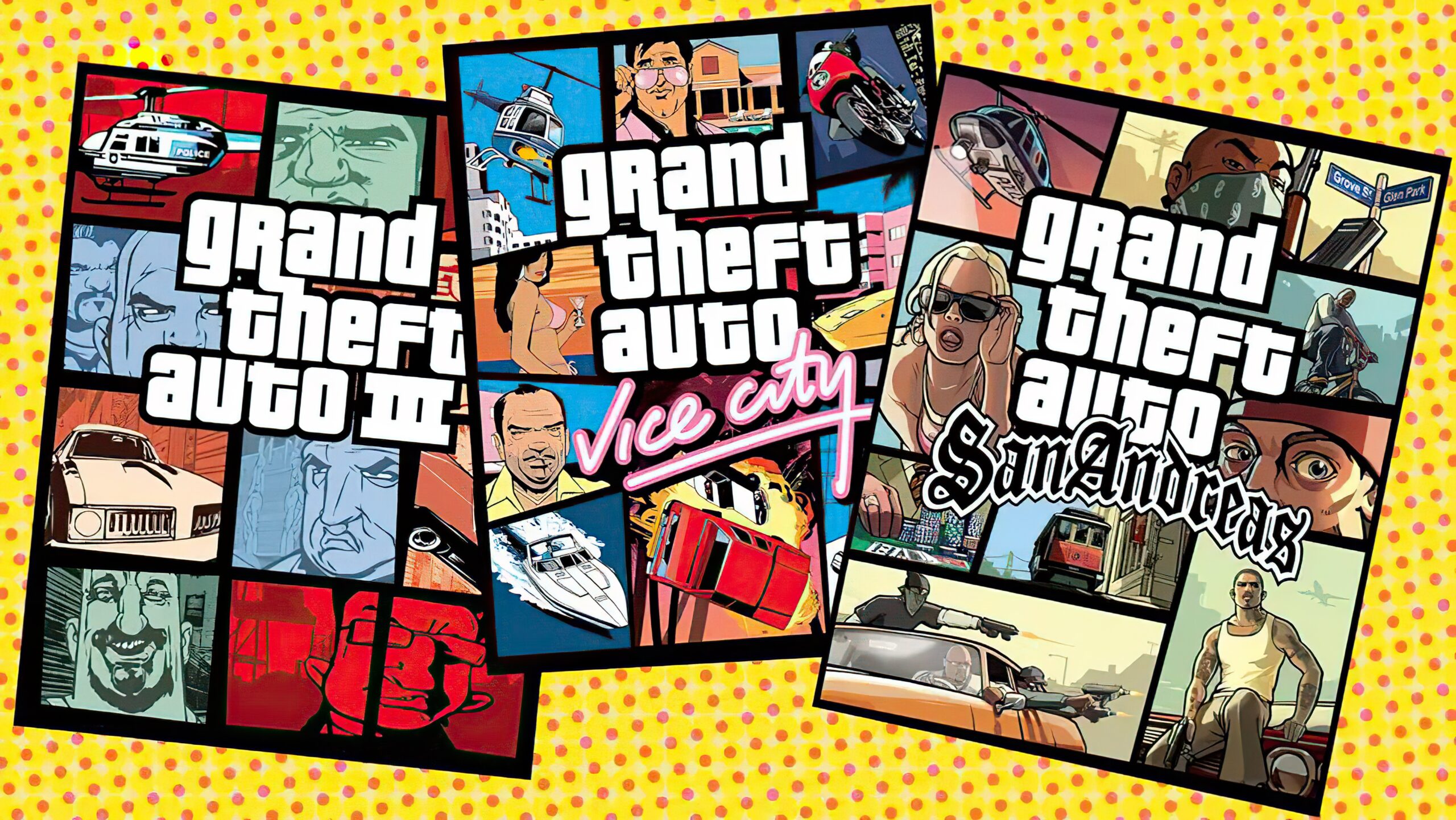 For me it has to be San Andreas.

-It was huge, it was funny and gameplay was good fun.

-And it had the best soundtrack of the series, by far.

- It was a HUGE open world, with three separate cities and a lot of countryside in-between.

San andreas. The gameplay was just the best, it still has better driving than games coming out on 3 console generations after it.

Vice City's map is pretty boring but the aesthetic and soundtrack kick ass. San Andrea is easily the best sandbox.

It takes everything they learnt from GTA3 + VC and takes the genre to a whole other level.

I loved the story + mission in SA, i really hope they bring the movement and gunplay to a modern standard in the upcoming trilogy.
R

It's still the best GTA game in general.

Vice City, but San Andreas is a masterpiece of course. But Vice City's aesthetic is simply kino on a level that only late 90s/early 00s games had. Pure soul.

Looking forward to finally playing III when the remaster comes out.

Wait why is there a picture of a squirrel with testicles

San Andreas on the playstation was amazing!

III gives me a dense nostalgia trip; it was the first "open world" game I ever played, and driving around a real city, with real people and real traffic felt like a miracle back in the day. The radio stations are stone cold classics, too.

But SA wins for me. It took everything III did and it super-sized it. More vehicles, guns, characters, missions, and gameplay than III had... and that's just the first city. I remember arriving in the second city for the time and being blown away by the audacious scope of it all. Few games ever hooked me like SA did.

Vice City had the best licensed soundtrack in the history of gaming and has yet to be topped (although there are signs that the Guardians game might come close).

Vice City is my fav. There's just something about it. I like the music and overall feel of it. The other ones are really good too. But Vice City is special to me.

Sub_Level said:
Wait why is there a picture of a squirrel with testicles
Click to expand...

SA has the best map, most variety, and best controls. GTA III has a pretty good map too.

On a technical level it's easily San Andreas...but I still prefer Vice City as an overall package. It has better music, atmosphere and story. Also it was the last dance for Lance Vance, and that has to count for something.

Gameplay (Tie)
The original PS2 version of Vice City with the non-rotatable camera and awkward manual aiming is pretty hard to go back to. However, with additional joystick software mapping the mouse aiming of Vice City and accelerating it on a controller analog stick the PC version gives it the most responsive shooting controls.

Of the original releases, the PS2/XBOX version of San Andreas has much more responsive controls. It also adds crouch walking/rolling, climbing, and swiming to the mix for even more ways to traverse the environment.

Story (VC by a wide margin)
Vice City has a strong start with a drug deal gone wrong and never loses momentum as Tommy gets intimately familiar with the criminal underworld of Vice City. Even the optional entrepeneur segments later in the game are filled with colorful characters and fun missions.

In contrast, San Andreas has a strong start in Los Santos (Los Angeles), but loses all momentum after Sweet's arrest and it doesn't regain it until CJ gets to Las Venturas (Vegas) and gets his shit together to finally takes vengeance. The subplot with Catalina is awful, being out in the sticks is boring, the entrepeneur busy work in San Fierro (San Francisco) is a complete waste of time, flight school is a snooze, and the FIB spook nonsense is way out there.

Atmosphere (VC by a small margin)
Vice City has a fun comic book version of Miami Vice's setting, an amazing licensed 80's soundtrack and a AAA cast including Ray Liotta of Goodfellas fame.

Conclusion (VC)
Vice City on PC is the best of the lot due to its cohesive design, but the PS2/XBOX versions (unlike other versions) of San Andreas come close.
Last edited: Oct 13, 2021
W

San Andreas. To me the best game ever made.

San Andreas, it had the most bearable shooting mechanics.

In Vice City I loved the Cuban jazz of Radio Espantoso and rock/pop ballads of Emotion 98.3.

In San Andreas I loved the funk and contemporary jazz of Master Sounds 98.3 and country songs of K-Rose.
Last edited: Oct 13, 2021

San Andreas and it's not even close. I've mentioned multiple times how Vice City is saved entirely by it's geographical and narrative setting. The coke-loving party heaven that is Miami in the 1980s.

Yeah, sure it's good. But it's nowhere near as good as VC and all the tracks, the funny, weird and awesome ads on the radio and so on.
Also Final Countdown, Take On Me, Holding Out for a Hero and some other a just overused to a point they lost all impact on me. Now I'm just "ah, again this track".

It’s between vice city and San Andreas for me, so I looked at the votes and seen that San Andreas was winning by one point, so I voted for vice city. Even Stevens. Love them both equally.

Never heard of the story games.

My vote goes to SA. I like VCs style, but SA was amazing screwing around in. Its also the only one I actually completed.

San Andreas is my favorite in the entire series, so that one.

Vice City was really good, while I think both the Stories games are better than III.
Last edited: Oct 13, 2021

Vice City for its setting and music. I'm usually a 90s guy when it comes to music, but damn was the soundtrack in Vice City good.
N

San Andrews is king. followed by GTA III and then Vice City.

San Andreas is the supeior game.

Vice City gets points for its atmosphere and music. But technically and mechanicaly it is inferior.

Original GTA3 gets points for being the first. And it did truely blow me away when I first played it. But San Andreas and even Vice City make the original look and feel like it was from a previous generation.

The PSP games are not even in the sqme league. Phill Colins concert in Vice City Stories stands out and memorable to me. But otherwise those games were forgetable and far inferior to the ones actually designed for PS2.

And I have actually played every single one of these games to completion. Some multiple times.
Last edited: Oct 13, 2021

NeverYouMind said:
Story (VC by a wide margin)
Vice City has a strong start with a drug deal gone wrong and never loses momentum as Tommy gets intimately familiar with the criminal underworld of Vice City. Even the optional entrepeneur segments later in the game are filled with colorful characters and fun missions.

In contrast, San Andreas has a strong start in Los Santos (Los Angeles), but loses all momentum after Sweet's arrest and it doesn't regain it until CJ gets to Las Venturas (Vegas) and gets his shit together to finally takes vengeance. The subplot with Catalina is awful, being out in the sticks is boring, the entrepeneur busy work in San Fierro (San Francisco) is a complete waste of time, flight school is a snooze, and the FIB spook nonsense is way out there.

You rarely see honestly like this when it comes to these two games.

SA might have the more refined gameplay, but Vice City is superior in almost every other aspect.

Still wish I could have had a chance to play the Stories as well.
You must log in or register to reply here.

Starhowl replied
Aug 14, 2021
Am I Missing Something? Shouldn't the Mafia I Remaster Make Us Optimistic About the Upcoming GTA Trilogy Remasters?
2 3 4