Victoria, the grand strategy society simulation series from Paradox Interactive set in the 19th century, is finally getting a third entry. Following years of requests by its passionate community, the strategy game specializing publisher surprise unveiled Victoria 3 with an announcement trailer during its PDXCON Remixed presentation today in the closing act.

Much like in the previous games, the new entry will have players keeping track of and providing for national populations that have their own political and material preferences, with a much higher focus on state management than war (Hearts of Iron) or roleplaying (Crusader Kings). Considering its depth, Paradox has helpfully provided a handy list of features Victoria 3 will have when it comes out: 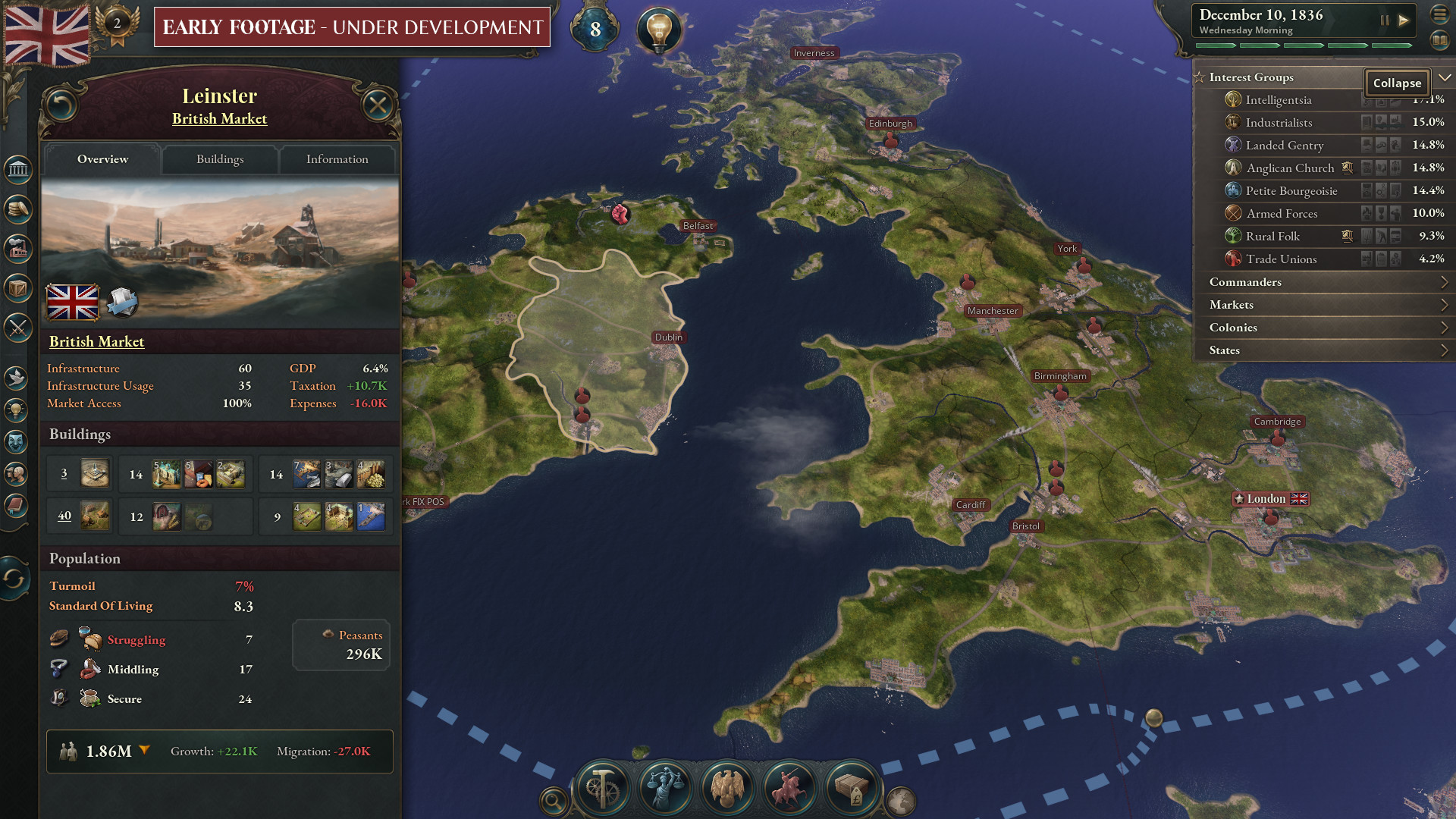 Paradox Development Studio is helming the project, promising an experience that won't be too daunting to newbies. Unfortunately for fans, Paradox does not have a launch window yet for Victoria 3, as the game is still too early in development. There is a Steam page already available though, great for anyone who wants to wishlist the PC exclusive.

Paradox also announced that alongside Steam, the game will land on Microsoft's Xbox Game Pass for PC subscription program at launch in a similar fashion to Crusader Kings 3.
Click to expand...

microsoft is the new moneyhat.

Nice, will buy on PC. Could care less, about stupid gamepass and moneyhatting. Although with the ammount of dlc being pumped out, i guess this makes it a good way for them to get people in and having them spending mtx for small dlcs that should of been in the game originally. Paradox has been getting real greedy with their games equaling out to over $200+ after all the dlc is bought.

As for the game itself will have to see if its as good as the past entries.

It’s not, but you’re wasting your time trying to reason

Well, developers are paid to put their games on Game Pass.

Of course, people will use "money hatting" in a disingenuously negative way because they're angry at the fact that Game Pass is a good service and they have to shit on it by describing a simple routine give-and-take transaction as something bad.
Last edited: May 22, 2021
T

Much like Crusader Kings 3 I suspect a bunch of Qol features and parts of the game would be sold as microtransactions.
M

Not a typical GamePass game for me. Usually I play Paradox games for years, it would be cheaper a one time purchase rather than a subscription.

Majukun said:
getting into crusader kings for the first time thanks to gamepass
Click to expand...

Yeah, me too. Still have to learn Europa Universalis IV though. I always postpone it.

They’re huge games that require a lot of time per run can’t really dip in and out of and with scummy dlc practices. If you’re going to play it, it’s cheaper to buy than rent long term.

I hope they do stellaris 2 with a better engine and no directx9..

Been waiting a decade for this

Green Team is pigging out

Great news for Gamepass subscribers, already paid up until 2024 so cheaper to just get the game for no additional cost, my son was asking me about this yesterday so he'll be pleased he won't have to pay anything extra for it.

Will definitely try this out.

I fell in love with Paradox games a few years ago with Stellaris, than came Crusader Kings3 and then tried others like Age of Wonders: Planetfall. Their games [and others like that] are a hard sell because many gamers simply don't give them a shot. Screenshots can't show the freedom you have in their games.

Loved the concept, but could never really get the economy to work in Victoria 1 without cheating . It definitely feels lika a harder game to master compared to CK and EU. But I love the time period so will give this one a try when it releases.

Makes sense that this game is 'free' on Gamepass. The amount of DLC that comes with Paradox strategy games is insane.

I think more games should do this. Release a free version, then make it as addictive as possible so people can't help but buy whatever DLC or MTX you throw at them.

If it follows EUIV dlc strategy then I might try it in 4yr.
Z

I am altready a Paradox user so it's not that useful for me!
L

TheDreadLord said:
If it follows EUIV dlc strategy then I might try it in 4yr.
Click to expand...

Ck3 follows the same formula and is fantastic. And that came after the phenomenal Ck2.
Last edited: May 23, 2021

But if you already have the subscription you can start just playing the entire game for free without risk. And if you decide to purchase it rather than keep the subscription (assuming you got the subscription for this game in the first place), guess what? All your saved game data is still there and carries with you to the fully purchased product.

Each time a new game is added to Game Pass people act as if that one game is the only reason to have game pass, or the cost of the subscription is going up accordingly, as if it now costs an additional $2 per month or an additional $5 per month.

Very excited for this. Victoria 2 is easily my favorite paradox game and one of my games that I have most hours in (somewhere between 700-1000). The time period covering industrial revolution, late colonization, leading to The Great War, end of empires and clash of political ideologies is the most interesting setting for me for these types of games.

The Victoria series is the one series out of all of their 1P strategy games that I have never gotten into. I reinstalled Victoria II on this announcement and I am going to give it another go. I'm guessing EU5 is on the docket. I really wish they would give another shot at a Napoleonic War game. Maybe a Victoria 3 earlier start date expansion or something.

Hari Seldon said:
The Victoria series is the one series out of all of their 1P strategy games that I have never gotten into. I reinstalled Victoria II on this announcement and I am going to give it another go. I'm guessing EU5 is on the docket. I really wish they would give another shot at a Napoleonic War game. Maybe a Victoria 3 earlier start date expansion or something.
Click to expand...

Victoria 2 on its own is kind of a broken game especially towards the late game, most people including myself play with HPM. It's an overhaul mod that also adds a bunch of new content. I would highly recommend downloading this before starting a new game.
Last edited: May 24, 2021

Not coming to gamepass anymore.

"The game will be a Steam exclusive at the release - after discussion with our partners it was decided that Victoria 3 won't be a part of Game Pass or Microsoft Store. Xbox fans of Paradox’s epic grand strategy titles can enjoy our games like Crusader Kings III, Stellaris, Shadowrun Trilogy, Hearts of Iron IV and more with Game Pass today and we look forward to sharing more details on our next partnership with Xbox in the future."

Dear Victorians! We are proud to say that we just reached another milestone in Grand Strategy history - Victoria 3 is finally available for pre-ordering. With the game release being scheduled for October 25, we hope that you will enjoy the unique...

Game looks good. Never played any Victoria game but i might this one. Just too bad it won't come out on Game Pass.

Victoria 3 for PC game reviews & Metacritic score: Paradox Development Studio invites you to build your ideal society in the tumult of the exciting and transformative 19th century. Balance the competing interest...

Paradox Development Studio invites you to build your ideal society in the tumult of the exciting and transformative 19th century. Lead dozens of world nations from 1836-1936, use your diplomatic wiles to weave pacts, alliances and rivalries to secure your position on the world stage. Expand your industry using new technology to create lucrative goods, and tax them for the betterment of your nation. Balance the competing interests in your society, and earn your place in the sun in Victoria 3! Politics, Economy, Expansion, Revolution. History is in your hands!
Click to expand...

Either way, they ain't getting my money.

Vicky and I had some good times.

I wish I could get into these grand strategy games. I think if I could force myself to learn the mechanics I'd love them.

jigglet said:
I wish I could get into these grand strategy games. I think if I could force myself to learn the mechanics I'd love them.
Click to expand...

I get your dilemma. I'm trying to force myself to learn EU4. I've learned Crusader Kings 3 and i really liked it, so learning EU4 would be awesome.
Last edited: Oct 26, 2022
You must log in or register to reply here.