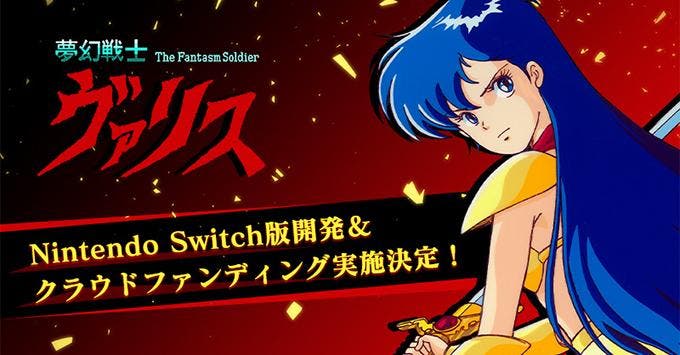 In celebration of the series’ 35th anniversary, this collection includes Valis: The Fantasm Soldier, Valis II, and Valis III.

What would you think if your best friend went on a date with the King of the Dark World - because she thought he was cute?! You'd think she'd been duped - and you'd be right. The fiendish King Rogles stands poised to conquer the other worlds of the universe: the Dream World of Queen Valia, and the Human World. Rogles and his five Dark Lords have taken the force of Yang from Queen Valia and sealed it into a Fantasm Jewel. Only a warrior with a heart perfectly balanced between Yin and Yang can wield the Sword of Valis against the encroaching darkness! Yuko, a young student from the Human World, is the chosen one - and you will control her. She is to become the greatest warrior in the universe, never suspecting that her most fearsome battle will not be against a Dark Lord, but against her closest friend from the Human World - the one she warned, "Don't go out with him, he's the Dark..." But before she could finish, her friend ran off into The Darkness.

From the ashes of your ravaged homeland, the legendary sword Valis calls out to you. Its power transforms you into a ferocious warrior against the evil forces of King Magus. Crush Zarooga, the fearsome red dragon! Battle the unspeakable Death Pod! But beware! Magus has sworn a blood oath to destroy you and capture Valis, to possess its power forevermore. Summon all your fury to face Magus in an epic struggle over the fate of your countrymen.

You are Yuko Ahso, a student in the Human World, called to fulfill your destiny in the Dreamland. Your mission is to wield the Sword of Valis to defend Dreamland against attack from the Dark King Glames. Glames seeks more territory to replace his disappearing Dark Kingdom. His powerful Sword of Lethus is the magical counterpart to Yuko's Sword of Valis. Whoever has the pair controls enormous destructive power. Yuko's twin sister, Valna, is the new Queen of Dreamland. Yuko needs Valna and her powerful magic in the battle against Glames, but Valna is trapped in a crystal block. Only with the help of Cham and her fighting spirit can Yuko free her sister. Can Yuko depend on Cham who was born of the Dark Kingdom? Yuko must defeat the evil bosses Garther and Kolilanba before Cham and Valna can help. You must evade and destroy Glames and his subordinates. Yuko, Valna, and Cham can slide, high-jump, and use special attacks with fire, ice and thunder. Increase your power by picking up attack items as you go. But time is running out. The fate of Dreamland hangs in the balance!
Click to expand...

What would you think if your best friend went on a date with the King of the Dark World - because she thought he was cute?!
Click to expand...

I'd be pretty jealous, I never get any demon lords asking me out
Reactions: Isa, NeoIkaruGAF, FloatingIslands and 1 other person

That music was banging! Hopefully this is physical.
Reactions: NeoIkaruGAF and Kuranghi

This looks like a game only for the kids who are lucky enough to have the CD add-on for their console.
M

MAtgS said:
I'd be pretty jealous, I never get any demon lords asking me out
Click to expand...

Reminds me of Fooly Cooly, her boyfriend is the king of demons from another dimenstion in that I think.

I have very fond memory of Valis series - starting from uncensored (actual full top nudity etc) MSX versions. Also followed the series till 3, but pretty much gave up after that.
Thing is, this game - asides the pretty animated sequences and great 80s style music... but didn't really have a lot of gameplay to offer. The controls were quite floaty, hits didn't feel satisfying etc.

I tried to play PC engine version that I loved dearly a while ago, and how disappointed I was.

Edit: Looks like they are all PC engine versions of 1-3. Well, can't really complain I guess.. that they had the best music due to CD sound with actual good voice acting. Especially Valis 1, PC Engine one is by far the best playable version IMO. Others were quite a mess. I do like Valis 3 on Mega Drive though as far as gameplay was concerned though... but if I'm asking MD game + PC Engine cut scene may be asking too much.
Last edited: Aug 23, 2021
Reactions: Isa and Heimdall_Xtreme

Will there be an Asian version with english text?
Reactions: Isa

i hate when they do a " collection " and then only adds 3 games !
Reactions: Heimdall_Xtreme

Will mess with this, only played Super Valis 4 and loved it back in the day. It was like a cooler Astyanax for me back then. What i actually really want is a new Actraiser however but Valis had its own little place in my childhood.
Reactions: Isa and NeoIkaruGAF

SALMORE said:
i hate when they do a " collection " and then only adds 3 games !
Click to expand...

Could be worse... Like Silent hill collection with only two games
Reactions: Isa and NeoIkaruGAF

I dream of either Wayforward or Inticreates licensing the IP to make Valis V, preferable in the metroidvania style.

Thanks for the news! I'm so getting this, glad its the PC Engine collection. Hopefully 4 comes along later with SD. Nice to see some older series getting some love, I plan on getting that Cotton Saturn tribute too.
Reactions: Heimdall_Xtreme
You must log in or register to reply here.

Dark Deity coming to Switch in 2022