The UK games market was worth a record £7.16 billion in 2021, according to trade body UKIE.

It found that last year, the UK games market grew 1.9% from the previous record of £7 billion, which was set in 2020 when many people flocked to gaming during Covid 19 lockdowns.

Console hardware revenues accounted for £1.13 billion of the total, due to strong demand for the recently launched PS5 and Xbox Series X/S, as well as the new Nintendo Switch OLED model.

Digital console game sales declined 5.59% to £1.65 billion and digital PC game sales fell 7% to £620 million, according to the report.

Mobile game sales were flat year-on-year at £1.46 billion, while physical sales of new and pre-owned games both fell by just under 21%, to £511 million and £33.8 million respectively.

Despite the overall decline in software sales, 2021 still marked only the second time annual software revenues have exceeded £4 billion. In comparison, the UK video market generated sales of £3.75 billion in 2021, while the music market generated almost £1.7 billion.

Revenue from video game licensed toys and merchandise increased 33.6% in 2021 to £159 million, with Pokémon products leading the way.

“The important story here is of how much of the lockdown-related boost seen in 2020 has been successfully retained during 2021’s year of correction,” said Steven Bailey, senior games analyst at research firm Omdia.

“We expect a return to growth for most digital areas in 2022, as game-makers continue creating new standards of compelling content, and explore combinations of business models that can help keep people engaged and connected even during unstable times.”

Good to see the game industry growing, should be another year of growth in 2022 with all the new releases.

I'd have predicted that 2021 would prove a poor year for software sales, neither XSX or PS5 launched with a killer app and the likes of Deathloop, Returnal, Ratchet, etc were all underperformers. Even the latest COD, which is huge in the UK underperformed somewhat.

However, I suspect 2022 will do far better for software whilst also maintaining high hardware sales (due to the infamous stock shortages).
C

UK Consumer Games Market Valuation 2021 – how much money did people in the UK spend on video games?

Find out how much UK consumers spent on video games, games consoles, PC hardware, virtual reality headsets and more in 2021.

yet it's still got publishers like EA putting out total shit!
R 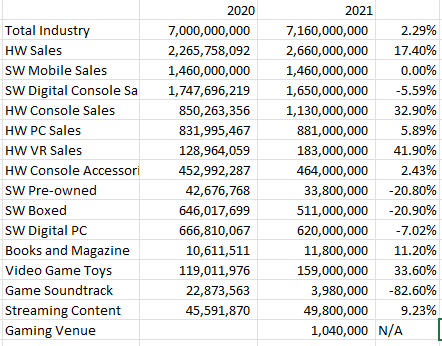 Using SW Boxed and SW Digital console numbers, physical has gone from 27.0% to 23.8%

the UK does have Rockstar North. i know the HQ is in NY but still...GTA is a british/scottish game. and those cunts are bringing stupid amounts of money in. it's a shame they don't pay their taxes. i'm sure some idiot will be counting all the money they make.
Last edited: Mar 31, 2022

billyxci said:
the UK does have Rockstar North. i know the HQ is in NY but still...GTA is a british/scottish game. and those cunts are bringing stupid amounts of money in. it's a shame they don't pay their taxes. i'm sure some idiot will be counting all the money they make.
Click to expand...

I believe this is money made from the sale of video game products in the UK, so where the developers are based has no impact on these numbers.

Wtf? Where did you get that and how could you not know it's wrong? Lmao

IbizaPocholo replied
Jan 19, 2022
Activision made a record $5.1 billion from microtransactions in 2021
News Business