I was at the fair on Saturday night. I saw a young couple eating them and asked them about them. They couldn't describe it so I asked them if it was like a cherry-flavored donut hole and they nodded. It's basically the same as deep fried Coca-cola... flavored batter fried up.

I'm going back for a brownie and thin mint. and I want dat rib.

edit: I'll post pics when I go back on tuesday.
D

Azriell said:
This sounds really gross. Don't get me wrong, I love fried stuff, but this doesn't sound good at all. Comparing it to donut holes only makes it sound worse as far as I'm concerned. Donut holes are supposed to be chocolately and awesome, not fruity. But maybe I'm just closed-minded.
Click to expand...

Somewhere, thousands of miles away, Paula Deen sniffs the air experimentally. She's caught a scent of... something...
S

Joe Shlabotnik said:
Somewhere, thousands of miles away, Paula Deen sniffs the air experimentally. She's caught a scent of... something...
Click to expand...

Figures that most of GAF would be food downers about this instead of just recognizing that it's a doughnut.

Once you actually explain the process behind many of the common foods we eat, GAF starts losing its shit.
X

LATIN, MATRIPEDICABUS, DO YOU SPEAK IT

Makes world leading predictions like "The sun will rise tomorrow"

I'm sorry, but you really have to come up with something crazy to beat deep-fried beer. And that actually maintains the liquid. It's not a flavored donut hole.

LATIN, MATRIPEDICABUS, DO YOU SPEAK IT

I was thinking more fo the line of taking like tater-tots, onion rings, or fries then breading them again for another deep fry or something similarly ridiculous.

I am convinced that this is what was in the case in Pulp Fiction!
C

Not liking this means not liking all fried foods now, Gaf?

Kool-aid in a doughnut hole sounds disgusting, imo. Period.
A

I had my first one over the weekend, and it will be my last. Not because it was bad for me (it was), but because it didn't add anything to the experience except soggy funnel cake dough and molten chocolate.
T

XiaNaphryz said:
I was thinking more fo the line of taking like tater-tots, onion rings, or fries then breading them again for another deep fry or something similarly ridiculous.
Click to expand...

I actually did something like this when I worked at a Taco Bell/KFC in high school one Summer. I breaded the KFC potato wedges in extra crispy and original dredge and fried em up. They were pretty awesome, especially with lots of cheese then throwing them into the steamer that is used to melt the cheese on Mexican pizzas.

I need to make sure that I get to the next fair so I can try all the new deep fried delicacies.
A

does not seem very outlandish. It's just a type of flavored donut.
Click to expand...

Exactly. I was more intrigued when I read the thread title, thinking it's some kind of fried sphere encasing a liquid kool aid filling. Realistically, that's something Ferran Adria could pull off, not a county fair vendor.
H

Do his chins denote his age?
I'm still trying to count them.
A

XiaNaphryz said:
I was thinking more fo the line of taking like tater-tots, onion rings, or fries then breading them again for another deep fry or something similarly ridiculous.
Click to expand...

I think traditional belgian fries or chips (or frites?) are double fried
H

Its just a cherry donut hole. This thread is getting me in the mood for fair food and the Minnesota fair isn't until the end of August.
K

I want it deep inside me. Everything in the OP sounds absolutely delicious. Too bad I've never seen this stuff in the fairs around here.
S

Sort of, but it's for good reason.

You have to fry them on a low (130-150 celcius) temperature for a few minutes to get them done on the inside (man , English really does not have a proper term to define the concept of 'garen', no wonder the cooking is so bad).

After that you take them out so you can turn up the heat to 180-190 degrees and when it's at that temperature you put them back in for another minute to sear them shut.
They also 'sweat' their moisture while frying (just water in them evaporating), so if you sear the outer layer the grease doesn't soak back in after you are done frying, so they aren't greasy and they become crispy on the outside (and still soft on the inside from being done but not overdone or not fried to a crisp on the inside).

The whole process is remarkably easy to fuck up and end up with caramelised sweet fries or soggy ones.
edit : Also since you fry them for longer this way you need potatoes with very low starch content, starch at that temperature turns into sugar (which gets you dark brown sweet fries which is obviously bad)

Also deep frozen fries that you buy in the supermarket normally have the stage 1 frying (or at least baking in an over) already done to them so you only have to finish them at high temp for 2 minutes.
I assume it's the same in the US, so your fries are probably also 'double fried' if you buy deep frozen ones instead of peeling your own potatoes.

We look down upon frying anything else, it's seen as a poor substitute for cooking skills and a fastlane ticket to the lardass zone.
T

I live in Calgary and we have the Stampede which last for 10 days and it's our chance to try deep fried goodies.

One thing people are hyped up for and I'm not is deep fried pop tarts. Anything that is deep fried has this batter on it so a Pop Tart already has an outside covering the filling would be like a double coating. I think it will suck.
B

I hate Kool-Aid (or really any sugary drink, for that matter), so this sounds gross.

But as far as fried fair food goes, deep fried buckeyes are my favorite. 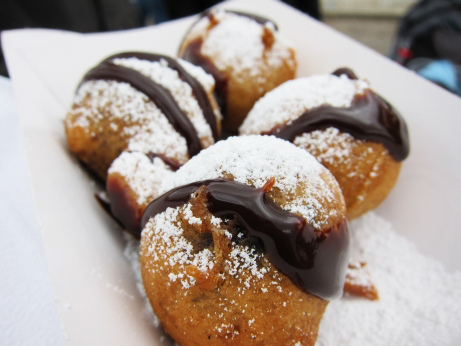 I'll be having quite a few of these at the Ohio State Fair next month.
K

Seriously, not one political joke in this thread?
V

The Internet said:
I live in Calgary and we have the Stampede which last for 10 days and it's our chance to try deep fried goodies.

One thing people are hyped up for and I'm not is deep fried pop tarts. Anything that is deep fried has this batter on it so a Pop Tart already has an outside covering the filling would be like a double coating. I think it will suck.
Click to expand...

You would probably be wrong. I thought the same until I tried deep fried twinkies. I don't even like twinkies but the deep frying changes their texture completely and having them hot changes the flavor.
A

Hai GAF. I'm at the fair. This is the Fair Special: chicken strips, onion rings, and a nest of fried zucchini. 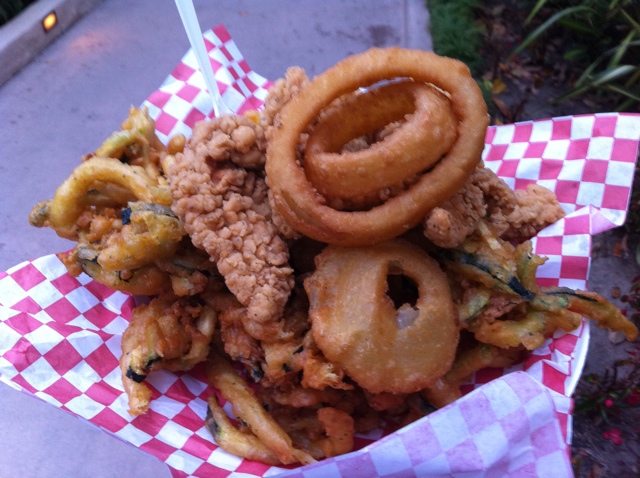 It's nothing outlandish, but I'm not done yet.
B

They've already fired coke syrup and beer, THIS IS NOT PROGRESS!
V

this is stuff i need to try sometimes... he is so smart~!
P 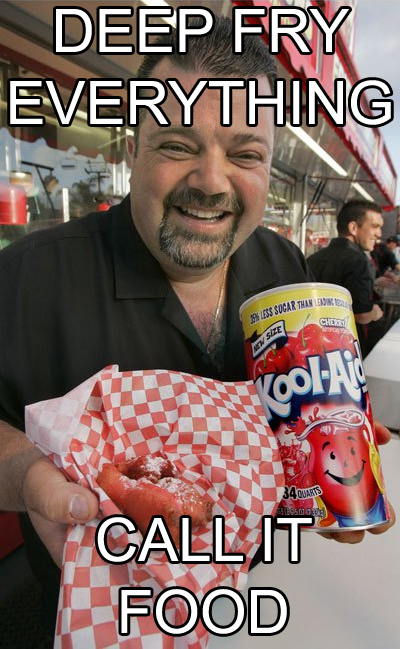 Is it wrong that I hate all deep fried food?
A

kris. replied
May 1, 2017
A Chef's Guide to the Deep-Fried Absurdities of the State Fair of Texas