Thinking about getting into competitive Geoguessr

I've been playing for years when I have a big "project" on the toilet, and to make it difficult, I've always done no move. I started off doing world, and I got really good at it. So good, to where I wanted to do something harder. I started to do United States only, which I find far more difficult because it's much easier to tell the difference between a country than a state. And a lot of the times it will put you in the middle if some random wooded area where it's impossible to tell the difference.

I had a rule where I can't look at license plates or signs. I wanted to tell purely by geography, architecture, etc. I started to get really good at it. Different states have different style homes, and I can usually get a minimum of 3/5(depending on my luck) and sometimes 5/5.

Then I found out a few weeks ago others play the same way. I honestly never knew. I figured few people play like that. So I started googling, and some people are really fucking good at it. Better than I am. They study their signage, their mountains, etc. But their tournaments are usually world, and I was watching one tournament online where a bunch of the best in the world at this game were playing and they were hoping they didn't land in the US, because they were talking about how hard it can be to tell where in the US you are. And I realized I'm pretty damn good at doing the US, and they use license plates and signs and I don't.

So I started to think if I put more time into it and honed by skills, maybe I could compete with some of these guys. In some of the videos I watched, I was doing it with them, and I actually guessed better than they did in some places. And I only did it as a hobby while taking a shit, I didn't dedicate time to studying. If I did, I think I could get really good.

Curious if anyone here plays competitively, or if anyone else knew this world even exists out there.

(btw when I say 3/5 and 5/5 I meant my "personal little game" I played was guess the right state). And I calculate my own bonuses and stuff if I do right city and even get it within yardage and stuff.
Last edited: Jul 16, 2022
P

Did the tutorial then a US game: 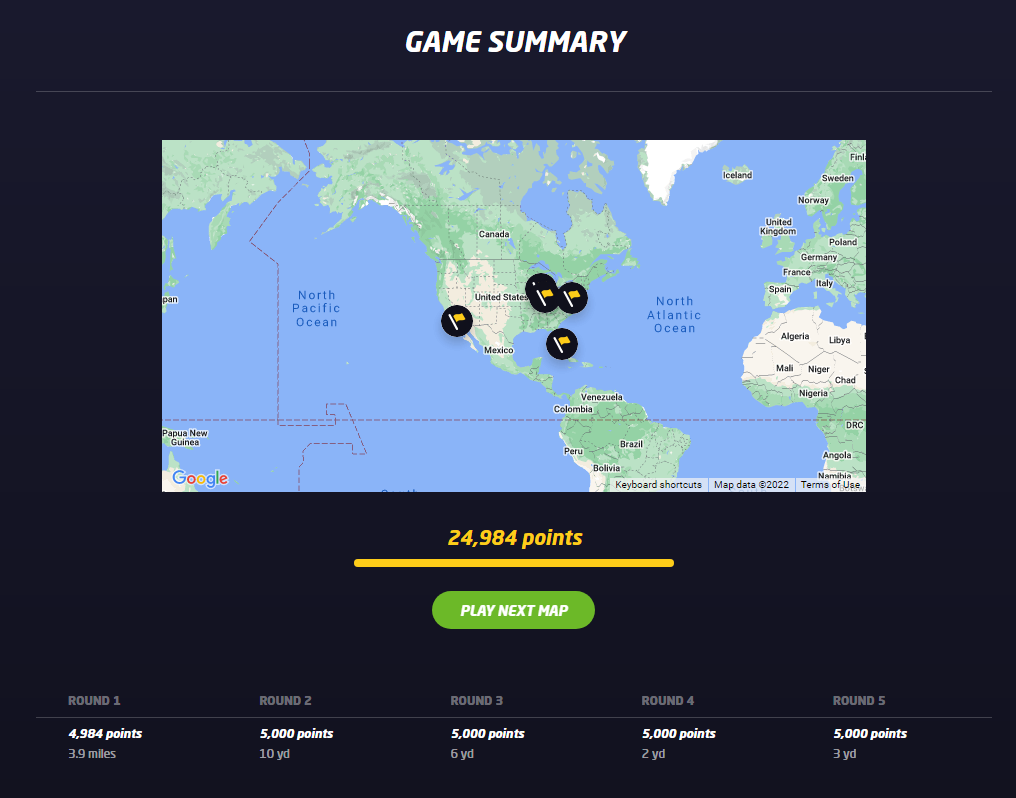 Shit's trolling right? Or at least still in tutorial mode? I remember messing with Geoguesser years ago. It got kind of boring because vast swaths of the Earth weren't on Google Streetview so if it looked kinda African, it was gonna be South Africa or Botswana, that sort of thing. But it did put me in very random spots.

(spoilers in case these are set tutorial locations)
This just dumped me in 5 downtown areas, at least 3 of which said the actual city on a nearby sign. One was here in San Diego so I didn't even really have to look. Chicago said Chicago on a building, which was never going to be hard because it put you right on Michigan Avenue. Miami is super distinctive especially right be the water. That's the one where I could have looked a little harder and figured out it was the thin bit to the east and not the mainland... It dumped me at some Washington Monument (not *THE* Washington monument) which was pretty obviously Baltimore, as there were references to Charm City, just nothing that actually said Baltimore that I noticed... and if it wasn't obvious enough, in the corner it was popping up MEMBA THE WIRE? amongst other obvious clues.

I guess if I had bothered a little more with the first guess I could have gotten the exact spot like I did with the others.

Anyway I say just play it for fun. I don't see this as a competitive endeavor at all. And I don't particularly like the way they've gussied up the gamification
Last edited: Jul 18, 2022

Top level Geoguessr is insane, you would have to know every kind of electricity pole, pedestrian crossing sign, bollard and taxi color in the world.

I'm pretty happy to get over 15k on 1-minute A Diverse World and recognize Lithuania from the landscape.

I think I'm pretty good at it for the UK but other countries I've no idea, gets pretty dull when your spawned in the middle of featureless countryside and you have to move for miles just to get a roadsign or anything with text written on it. I just guess those as Wales, Ireland or the north and I'm usually right if not close anyway. I've watched some competitve videos and it's great entertainment.

I've just learned what Geoguessr is.
Never heard before.

Played it when it I guess when it was first released because that was eons ago.
I've seen some amazing short videos of people playing it lately and they are insane.

If competitions exist why not have a go? At least you'd see where you sit.

Never heard of it before but it sounds cool?

never heard of it before! /s

go for it. i enjoy playing it now and then but wouldn't think i'm good enough to be competitive. good luck
You must log in or register to reply here.

I had an epiphany about humans, life, earth, the universe, etc, and I wanted your opinion
2

PaddyOCanager replied
Aug 5, 2022
The age of moving out of your parents house
2 3

Mondai replied
Jul 26, 2022
I very rarely get down psychologically, but when I do it's always caused by one thing: overthinking

Wildebeest replied
Jun 30, 2022
how did it all go down for Alien: Covenant after one of the best opening scenes in a movie?
Opinion