From video games to music, these guitars get a new lease of life.

Eli McNaughton from Traverse City, Michigan runs Scrap Metal Studios that specializes in guitars and basses made out of consoles, gas cans, old-fashioned lunch boxes, and basically anything that’s not of these modern times. But I think what we are most interested in here is Eli’s retro consoles that he gives a new way of life to in the form of guitars that are actually playable. Looking at the NES the description states that it’s a full-scale NES Nintendo electric guitar put together out of spare used miscellaneous parts found in Eli’s garage and strung with new Ernie Ball strings with new electronics and neck fitted. Eli does stress that the guitar does not play video games unlike this one right here that allows you to play games and shred at this same time.

If the NES wasn’t your jam back in the day, then how about one of Eli’s Sega Genesis guitars or going really old school, the Atari 2600? The Sega Genesis Electric Guitar’s overall length is 30.25″ and the bridge to nut length is 21.25″. It also has a single-coil pickup, a single volume knob, and stung with new Ernie ball strings for those of you who like your specs. It certainly would be perfect for a real conversation starter. Personally, I really like the look of the Atari 2600. Although there aren’t any specs on this particular guitar, I have fond childhood memories of playing this system with my cousins where we dove into some classics that included Pitfall!, Frogger, Q*bert, Double Dragon, Raiders of the Lost Ark and many many more. Also, that wood effect just slaps.

I'm not sure how this one worked out. I love the Dreamcast but I hate single coil pick-ups on an electric guitar. That NES has more high voltage with that single humbucker. 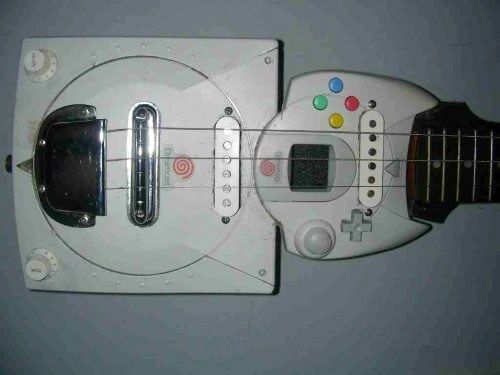 I'm also reminded of this Commodore 64 bass guitar by Jeri Ellsworth. who helped create the Commodore 64 Direct-to-TV in 2004.


The sound is generated by the C64's SID chip!

These are tacky
You must log in or register to reply here.