Rumor The big SEGA announcement is another exclusivity deal with Nintendo

Not too long ago, SEGA and Nintendo entered into a 3 game exclusive deal. This is the only thing that gives me any kind of inking that this rumour could have some weight, although if the date aligns with the PlayStation event you can't be sure. Nintendo don't seem to want to be a direct rival to Sony but a second console that you have for portable gaming and exclusives, not as your main console or perhaps home console because the switch will only ever run mildly improved last generation quality versions of current generation games. In the next generation Nintendo I don't think will have any current gen unless drastic cuts are made or we get that switch Pro or even successor.

This appeared on Reddit a few hours ago. Please take it with a pinch of salt.

Let me be VERY clear: what I'm writing is second-hand information, but it is credible and makes sense.

You may have seen this article: https://www.express.co.uk/entertain...GA-announcement-teased-rile-up-games-industry

This is inaccurate. SEGA has not patented any new hardware/console name.

You also may have seen the rumor floating around that Microsoft has aquired SEGA. This, too, is untrue.

What I have heard so far:

Persona 5 WILL be released on Switch

A new Sonic & Mario platformer will be announced this Fall

Sonic Team is being rebuilt

Persona 1-4 will be released later on in 2020, followed by Persona 5 and 5s for Holiday

Shin Megami Tensei's DS games will be ported to the Switch

A new IP called "Stranlove: Chronicles of The Order" will be announced in September of 2021
Click to expand...

I can't say I'm 100% convinced but then Nintendo and SEGA have come to arrangements before today.
Reactions: theSoftBullet, Skyfox, cireza and 9 others

Persona 4 golden and the SMTs on Switch would be amazing
Reactions: Closer, Lionel Richie, Stilton Disco and 2 others

Well that will keep me interested for at least 2 years before SMTV.
Reactions: ajim

Oh well, if I'm interested in those games, I guess I'll play them some day on Yuzu.
Reactions: Holammer and Mr White
S

Stranlove: Chronicles of the Order? 5-6 persona games being released within the next six months?
This is so fake it's embarrassing anyone took the time to post it here.
Reactions: FrozenFlame

SMT ds games is the only i could want here
this is one of the hybrid thing advantage.
finally taste some handled things i missed ported on it.

I domt really buy it, but a Sonic and Mario platformer headed up by EPD Tokyo would be incredibly hype
Reactions: lo zaffo
S

I wouldn't want Sega making games exclusively for Switch, but I do want them to have mostly platform exclusives (yakuza games on Sony, M&S on Nintendo, maybe have MS exclusives like on OG XB)

Anyway its not new a partnership between Sega and Nintendo, but can't say anything good came out of it. Sonic Lost and Boom were example of that.

I mentioned a weird deal in the SEGA thread but I assumed the SMT games would be on Switch.

Would be fantastic to hear if Sonic Team is being rebuilt but what exclusivity deal?

Where's my House of the Dead remake?
Reactions: Nankatsu and Aidah

Just show off Shin Megami Tensei V! Give me a reason to play my Switch.
Reactions: Shodan09, Khalid M. and ajim

"We are proud to announce we will be extending the Mario and Sonic Olympic games deal!

We hope you will enjoy it!”
Reactions: Skyfox, DonF, Starlight Lotice and 2 others

This is "really revolutionary"? This is on "PS5 Wired exclusive level"?

Seriously, if this is true, F*** this guy.
Reactions: KingConan, GamerEDM, Arachnid and 7 others

Branded for life by her misdeeds

TLZ said:
This is "really revolutionary"? This is on "PS5 Wired exclusive level"?

Yeah, I really don’t care about any of this, lol.

Hopefully it’s something that will bring a lot of fun and happiness to gamers.
Reactions: TLZ

DaveMorris said:
Where's my House of the Dead remake?
Click to expand...

Call it killed by death

I don't care about any of this but it's about time we get Persona games on PC so I can finally play them.

SMT DS games on switch would be sweet too, I'd definitely get Devil Survivors games if they come with Japanese voices, it's 2020 and I don't see how this is not standard yet considering the target audience for jrpg


TLZ said:
This is "really revolutionary"? This is on "PS5 Wired exclusive level"?

Whatever happened to that Sonic movie game tie-in?

Since when are exclusivity deals "revolutionary"?
Reactions: KiNeMz

Persona on switch would be life altering

JimboJones said:
"We are proud to announce we will be extending the Mario and Sonic Olympic games deal!

We hope you will enjoy it!”
Click to expand...

Your avatar is not best pleased with that news.
Reactions: JimboJones

FranXico said:
Since when are exclusivity deals "revolutionary"?
Click to expand...

My brother was a member of a Sonic forum, so unfortunately they take anything at that level. Lets hope is indeed revolutionary instead of this dumb news.

DaveMorris said:
Where's my House of the Dead remake?
Click to expand...

Holy shit, this could be what BluePoint have been working on!!!!!

Welcome to the Fantasy Zone were any rumor is real, makes sense and is for shure. Get ready!

Welcome to the Fantasy Zone were any rumor is real, makes sense and is for shure. Get ready!

How about this for fantasy shit:

AAA 3D Sonic game that uses next-gen tech to let you run around the world at actual Sonic speeds, fast travel is slower than normal travel in this game!
Reactions: odd_hatch and I Love Rock 'n' Roll

Meh if true but not really believing it OP.

Kuranghi said:
How about this for fantasy shit:

AAA 3D Sonic game that uses next-gen tech to let you run around the world at actual Sonic speeds, fast travel is slower than normal travel in this game!
Click to expand...


BTW: It would be Seaman 3, Seaman 2 was already available on Playstation 2 (with a far more obscure mic).
Last edited: May 30, 2020
Reactions: DigitalScrap, Birdo and Kuranghi

Sonic Team being rebuilt is all that really matters (way past due). Well, I suppose handheld Persona games are noteworthy, but I’ve already been there done that (true of most every port the Switch gets).

Me and my girlfriend once played Seaman for an hour or two and we didn't know you had to hold A to use the dreamcast microphone, plus I don't think he talks for quite a while in the game lol

So Sega is going to just take Persona 4 Golden off of the Vita and port it to Switch without ever letting it go on PS4/PS5? LOL Fake as shit.
Reactions: Rean no Kiseki

Kuranghi said:
Me and my girlfriend once played Seaman for an hour or two and we didn't know you had to hold A to use the dreamcast microphone, plus I don't think he talks for quite a while in the game lol

Really wish they would port it so we can play on Switch lol
Click to expand...

I still have my mic here, but my english pronunciation sucks 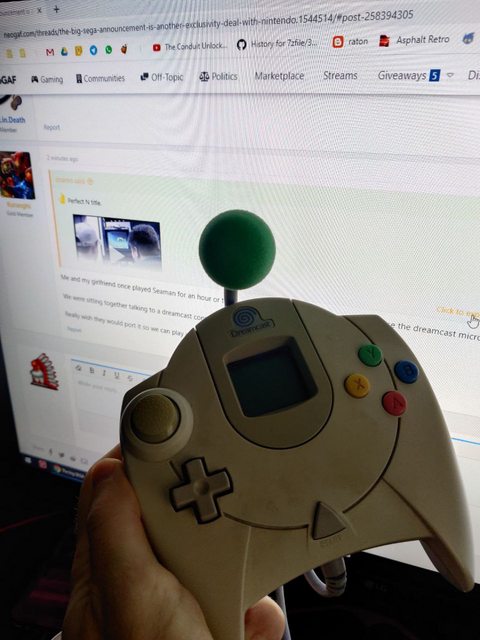 After how awkward the Wii U exclusive era was this seems strange, they've been making bank on being multiplatform again and been getting extra revenue from ports.

I would actually love that! lol

An Isolation sequel and the Persona games would be a dream come true, so I'm hopeful, but realistically this is probably bollocks.
Reactions: Skyfox

I wouldn't want to play P5 on the Switch, since it's already got a PS4 Pro version... but P4 Golden? Oh, hell yes. And the other SMT games. Wish they'd fucking bring Nocturne and DDS over, though.
Reactions: JareBear: Remastered

I guess Persona 5 on switch rumors has started up again...

Even the rumors, fake or not, refuse to give more info on Shin Megami Tensei V
Reactions: JareBear: Remastered

But Sega does what Nintendon’t

93xfan said:
But Sega does what Nintendon’t
Click to expand...

That wouldn't "rile up games industry".

So either this is fake as shit, or that jorunalist called his career done.
Last edited: May 30, 2020
Reactions: KiNeMz

A bunch of games is supposed to be revolutionary and rile up the industry ?

This looks more like a port-beg from anything Atlus for the Switch.
Last edited: May 30, 2020
Reactions: Kazza and Rean no Kiseki

Can't wait for the date to come and be disappointed

Well, Famitsu are known to overhype things. This seems like the level of announcement that would be significant, except waaaay less so than the journalist implied. Just seems so strange to announce this near the PS5 event, so I'm going to go with false on this one. I think the announcement is likely to have something to do with Sony. Probably a SEGA game that's PS5 exclusive (and not Yakuza, since MS seems to want that game on their platform).

martino said:
SMT ds games is the only i could want here
this is one of the hybrid thing advantage.
finally taste some handled things i missed ported on it.
Click to expand...

These rumors are bullshit, just a fanboy wishlist.

A Famitsu journalist wouldn't call revolutionary some Switch ports of old games.
You must log in or register to reply here.

Retro 20 years ago to this day, SEGA left the hardware business

Feb 6, 2021 started McRazzle
54 minutes ago
DeafTourette
2
Business Sales-Age Platform Nintendo Switch surpasses the million and a half units sold in Spain and is once again the most shipped console of the year