This game's subtitle should be: Rage of the Angry Karen.
Reactions: Vtecomega, TheBoss1 and CatLady
E

HUD, with what appears to be an Alien weapon: 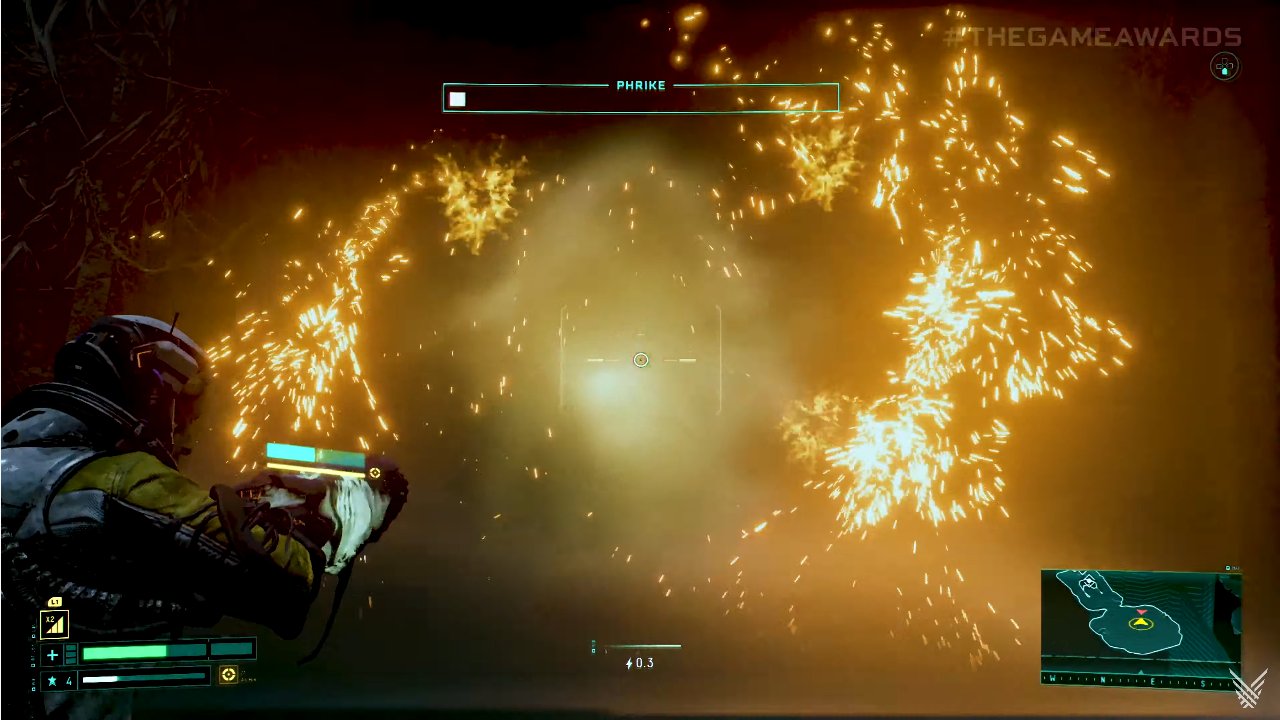 Gameplay looks awesome, but hate that the protagonist looks like my old boss

She just looks like a typical scientist /astronaut lol not every chick in a game has to be super hot, I don’t see any agenda here. Think of it like casting the right look for a movie . If anything it’s more realistic usually the hottest women aren’t the ones pursuing the highest levels of education.
Last edited: Dec 11, 2020
Reactions: Beardsalt, thismeinteil, Piggoro and 12 others

on my radar ... the gameplay reminds me of that japanese Lost Planet spinoff E.X Troppers !

looks really cool. it's a new ip so it should get a lot of spotlight.

im not expecting this game to be that good, but it looks cool enough for me. i think sony charging 70 is iffy on this one
T

This game looks awesome!! Can't Wait. This also means RatchetnClank is not coming in the Launch Window, thus delayed. Alternate theory for Special Attack is that the alien forehand-device is the special attack discharge vehicle (since she pounds the ground) and the hexagon device on the back is the charger?
Or the hexagon device charges the jet pack; with the player having a jet pack bar that depletes upon uses (limited).

Housemarque is a great studio and this looks extremely fun. Day one for me
Reactions: gojira96, MrS, xiskza and 2 others
T

Returnal looks like Alienation and Metriod Prime had a baby.
My body is Ready!!!
Reactions: Coulomb_Barrier, Enzo88 and Knitted Knight

God forbid a feminine protagonist having an ounce of femininity.
Reactions: Stilton Disco, thismeinteil, gojira96 and 7 others

The game looks pretty good to me. That $69.99 price tag pisses me off though, can’t exactly put my finger on it; maybe it didn’t bother me as much with Demons Souls because I knew I’d end up playing it for 50 hours minimum.

I probably wouldn't be interested in this if there wasn't the possibility the gameplay is really awesome thanks to Housemarque
Reactions: Laconian Sword and Self High Five

SlimySnake said:
doesnt look next gen to me.
Click to expand...

Playing the video in a small window was looking ok, made it full screen at 1440P and it started looking a bit PS4.

Seems funs and dont mind all the crazy monster design and particle effects but would be one to wait for reviews.

This looks flippin brilliant. Really hope it does well for Housemarque, they deserve to blow up big after all these years of knocking out bangers.

One of my most anticipated games.
Reactions: Unknown?

I love how quick and responsive everything is, wondered if they'd be able to take that from alienation and machina into a proper TPS. Looks like they have done and kept the gun mechanics really simple and effective.
Reactions: mekes

Reactions: Kazzz1896, thismeinteil, gojira96 and 13 others

It looks interesting, but I need to see more.

If you tell me is PS4 I would believe it with no problem.
Reactions: SLESS
Z

I'm hoping the story is strong with this one
Reactions: Crm114

This looks incredible. The gameplay loop in particular is gonna be interesting to see how it holds up. And it drops in March already. 2021 is gonna be a hell of a year for gaming.

Looks awesome and it's Housemarque so will buy it day one.
Reactions: xiskza

There is something super weird with the facial animation of the character. Kind of looks like those deepfake videos!
Last edited: Dec 11, 2020
Reactions: mckmas8808

If this is like Risk of Rain 2 I'll be all over it!

TonyK said:
If you tell me is PS4 I would believe it with no problem.
Click to expand...

If you tell me it would run at 60fps on PS4 I wouldn't believe it with no problem. Graphically it looks very last gen but to hit the performance target on PS4 would be impossible.
Reactions: Blood Borne, SoloKingRobert and Coulomb_Barrier

is this what Karen's will be doing in the future?

Not sure i like particle effects, but otherwise game looks great !

Batiman said:
Reminds me of recore. Nice colours but so much going on screen. Looks messy
Click to expand...

What more do you want? It's Housemarque particle spooge. "All over my tits!"

The gameplay looks better than the graphic.

I am really looking forward to the release of Returnal. I can't wait to explore the planet, discover its lore and triumph against the environment

Not that great looking, but it's Housemarque, so it means a great game

I'm all over this game. Anything from Housemarque, really.

Batiman said:
Reminds me of recore. Nice colours but so much going on screen. Looks messy
Click to expand...

No Way. Because its a Third Person Shooter?
Nah its Alienation and Metriod Prime having a baby. While keeping the crazy amounts of particle affects HouseMarque is known for.
Reactions: kyoji and MrS

Day one. Housemarque can do no wrong.
Reactions: kyoji

any retailers taking pre orders on this yet? i checked amazon and nothing
O

Looks great, but do we more trans friendly crap, its pissing me off, wont be buying, we have vote with our wallets thats the only way they will listen.
Reactions: Vtecomega

Looks cool and sounds cool. For some reason I'm not all in though. Definitely on my radar regardless and I'm hoping for the best!

onnextflix5 said:
Looks great, but do we more trans friendly crap, its pissing me off, wont be buying, we have vote with our wallets thats the only way they will listen.
Click to expand...

Day ONE! I love Housemarque's games.
Reactions: Entroyp
You must log in or register to reply here.