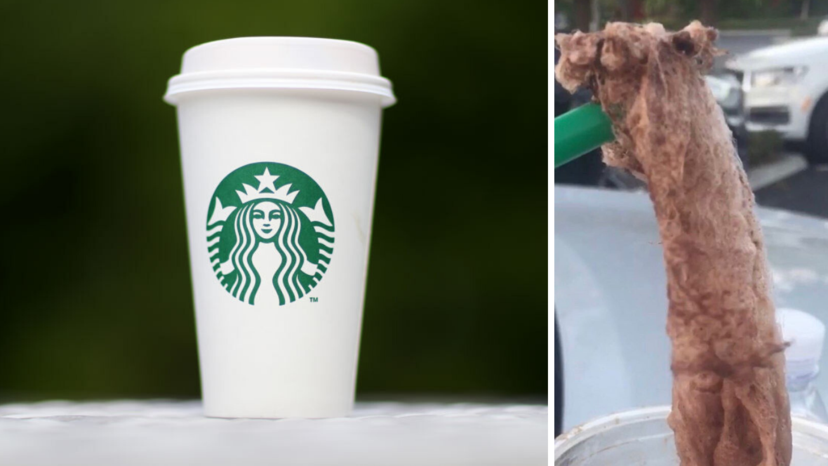 A Los Angeles police officer said he found a tampon in a coffee he purchased at a Starbucks run by Target - but the company said it reviewed video footage and did not find any suspicious behaviour.

The officer was off duty and in plain clothes when he ordered the ‘Frappuccino’, and used a police union credit card to pay, according to Fox 11 in Los Angeles which first reported the claim Monday night.

Reporter Bill Melugin shared an image showing a cloth strip being held above a cup using a green straw.

The Los Angeles County Sheriff’s Department, which is investigating the case, declined to comment on whether the complainant is a police officer, saying “that information is not being released” at this time.

The Starbucks was located in a Target, and its workers are employees of the retail chain.

All available video is being reviewed and detectives continue to conduct interviews to complete a thorough investigation,” she said Wednesday.

A spokeswoman for Target, Jacqueline DeBuse, said in a statement Wednesday: “We take this allegation seriously. We have reviewed video footage and have not found any suspicious behavior.

“We have shared the video with the Los Angeles County Sheriff’s Department and look forward to the conclusions of their investigation.”

“This disgusting assault on a police officer was carried out by someone with hatred in their heart and who lacks human decency,” the union said in a statement.

“We hope they are publicly exposed, fired, arrested, and prosecuted for their cowardly and repugnant actions.”

The episode comes days after three New York City police officers complained of feeling ill upon sipping milkshakes from a Shake Shack restaurant in Manhattan on the evening of June 15.

Some of the city’s police unions immediately claimed in social media postings that the officers were intentionally poisoned.

The Detectives’ Endowment Association said in a statement on Twitter that “three of our brothers in blue were intentionally poisoned by one or more workers.”

The Police Benevolent Association followed a short time later with a similar alert to members, writing that “a toxic substance, believed to be bleach” had been placed in the officers’ beverages.

But by morning, the police unions had taken down their statements after the department’s investigation concluded that it had found there was “no criminality” by Shake Shack’s employees.

Oh, Target said it was all okay. Never mind, everybody.

The worker must of just heard him mistakenly order the other specialty coffee drink the tamponcinno.

I mean the milkshake story was also made up soooo

Ordered a coffee, instead got a Bloody Mary

Maybe it happened, but cops keep getting caught lying about these fast food abuses (surprise, the police lie all the time). It's funny, too, because all of these places have had cameras watching the employees for years. You'd think the cops would know this by now.

So the Barista must have always kept a tampon on hand for just this type of revenge for when an officer not in uniform that can only be ID'd by his credit card might come in a buy a coffee and there's a special code the cashier can say to the barista to let them know if a Tampon to go order?

Should of said it was a noose.
Y

So how long before we find out this one is fake too?

But when we start talking about unions for the 90% of the workforce who isn't in one, it represents communism that is an existential threat to our American way of life. Ok.
M

But when we start talking about unions for the 90% of the workforce who isn't in one, it represents communism that is an existential threat to our American way of life. Ok.
Click to expand...

There's something about the most powerful, well paid union in the country going after minimum wage at-will employees that grates me the wrong way. Has a single one of these food tampering stories turned out to be true?
Last edited: Jun 26, 2020

Why do they hate the police so much?

The vagina tea guy from the social media thread wants to become a cop now:

The very best of social media

H4ze replied
Feb 13, 2020
Police find juvenile they say licked a tub of ice cream and put it back on the shelf
2