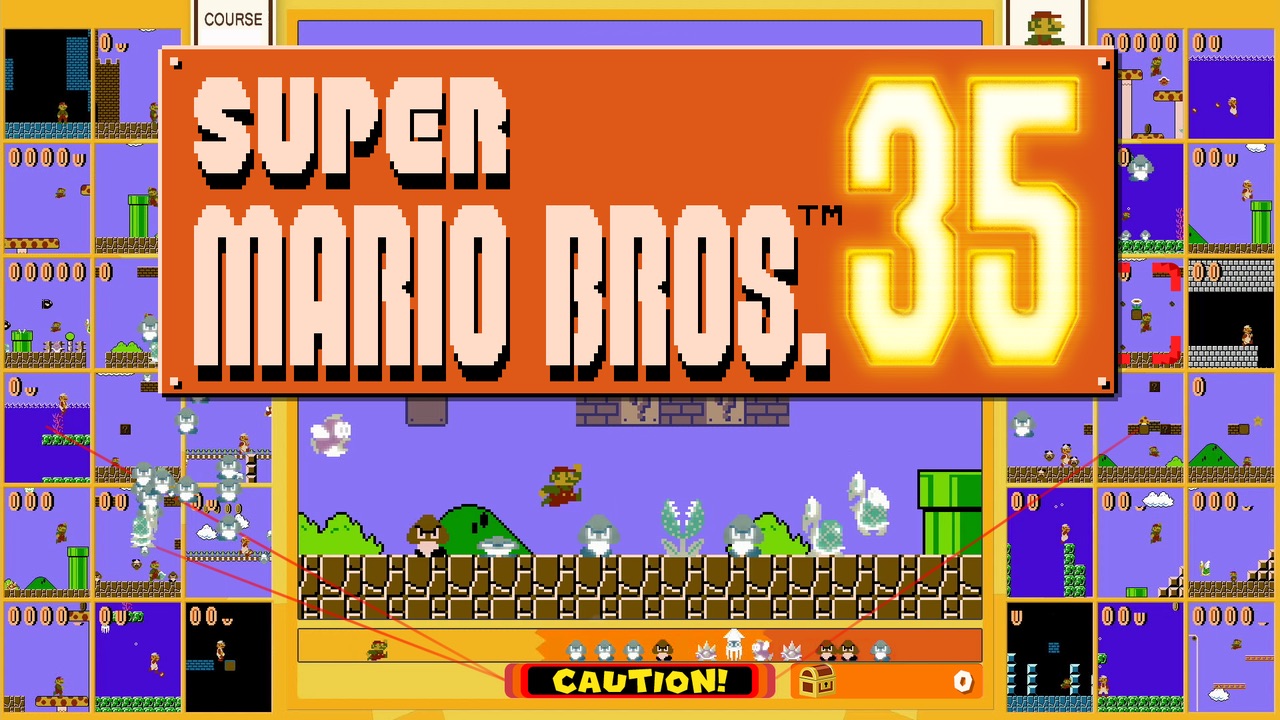 Super Mario Bros. with a 35-player twist
Race against time, defeat enemies, and sabotage your opponents in an online battle to be the last Mario standing! 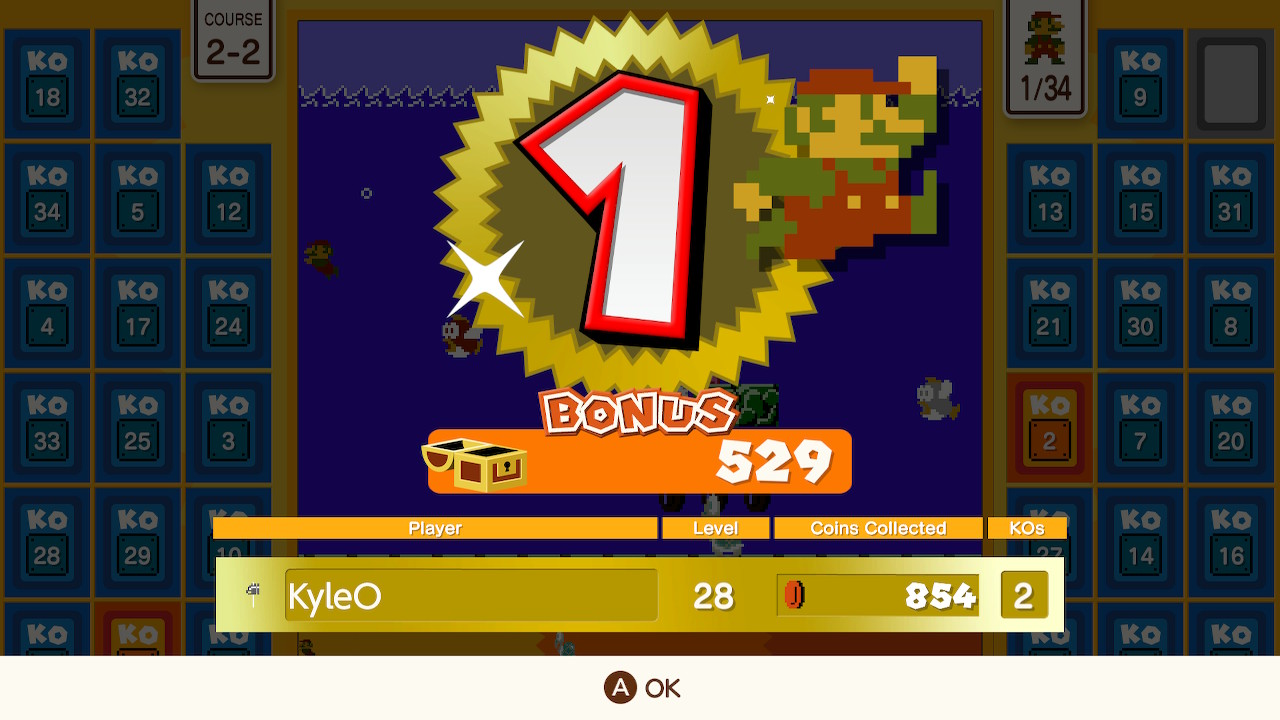 Super Mario Bros. 35 is a battle royale take on the original NES Super Mario Bros. game. You play through a somewhat-randomized selection of levels from the original, collecting coins to spend on items and defeating enemies or completing levels for more time. Enemies you defeat are sent to opponents' games as extra, "garbage" enemies to hinder their progress. As in Tetris 99, you can target particular opponents or let the game handle targeting for you based on the criteria you select. (I've been sticking with "Attackers.")

Time is very limited, so you have to keep defeating enemies and hitting flagpoles to add seconds. Running out of time is as much of a threat as the dangers in the level.

You can't earn extra lives (1UPs are worth additional coins only); instead, the coins you collect are for spending on items to keep you going. By hitting the X button, you'll dump 20 coins for a quick spin of the item roulette block. You can get a mushroom, fire flower, starman or POW block (which kills all enemies on screen). 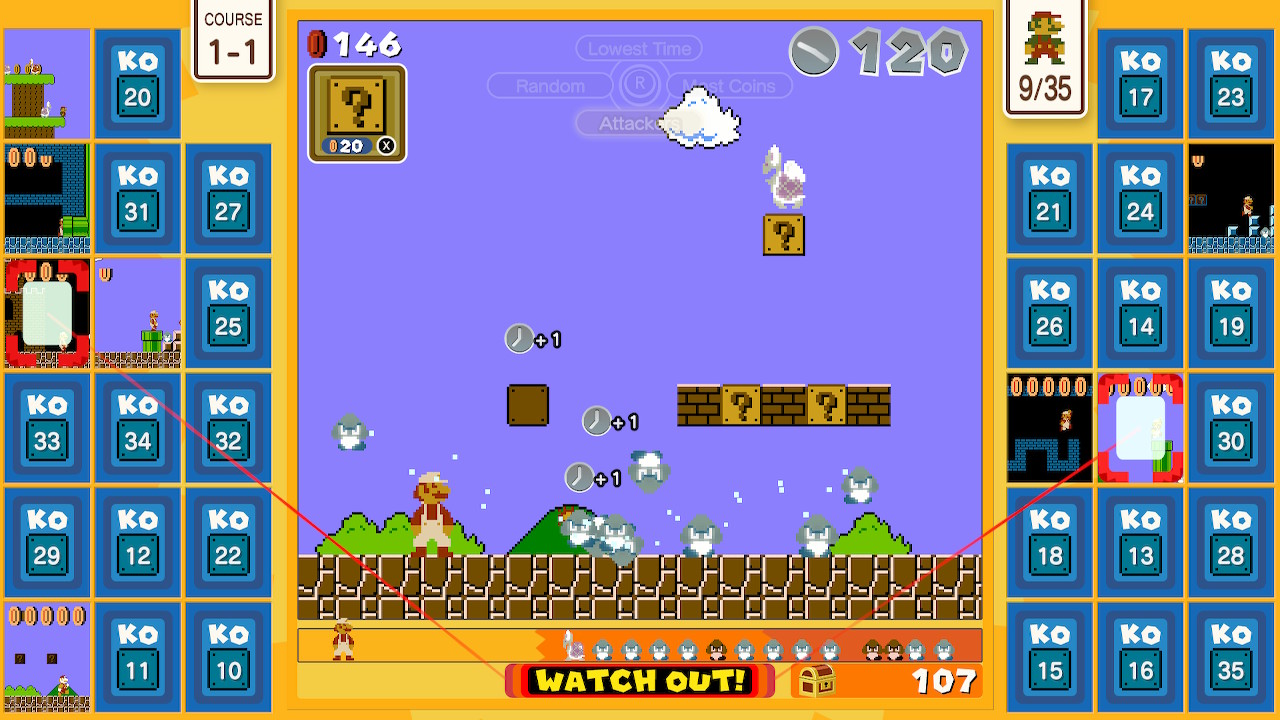 You also earn coins to use between games. You spend these when beginning a new game in order to start out in a powered-up state, which is definitely a good idea. Besides powerups, you can select a level you'd prefer to play and the matchmaking will somehow take that into account. Levels after 1-1 have to be unlocked -- you'll still play in levels you haven't unlocked, but you can't set them as a matchmaking preference. 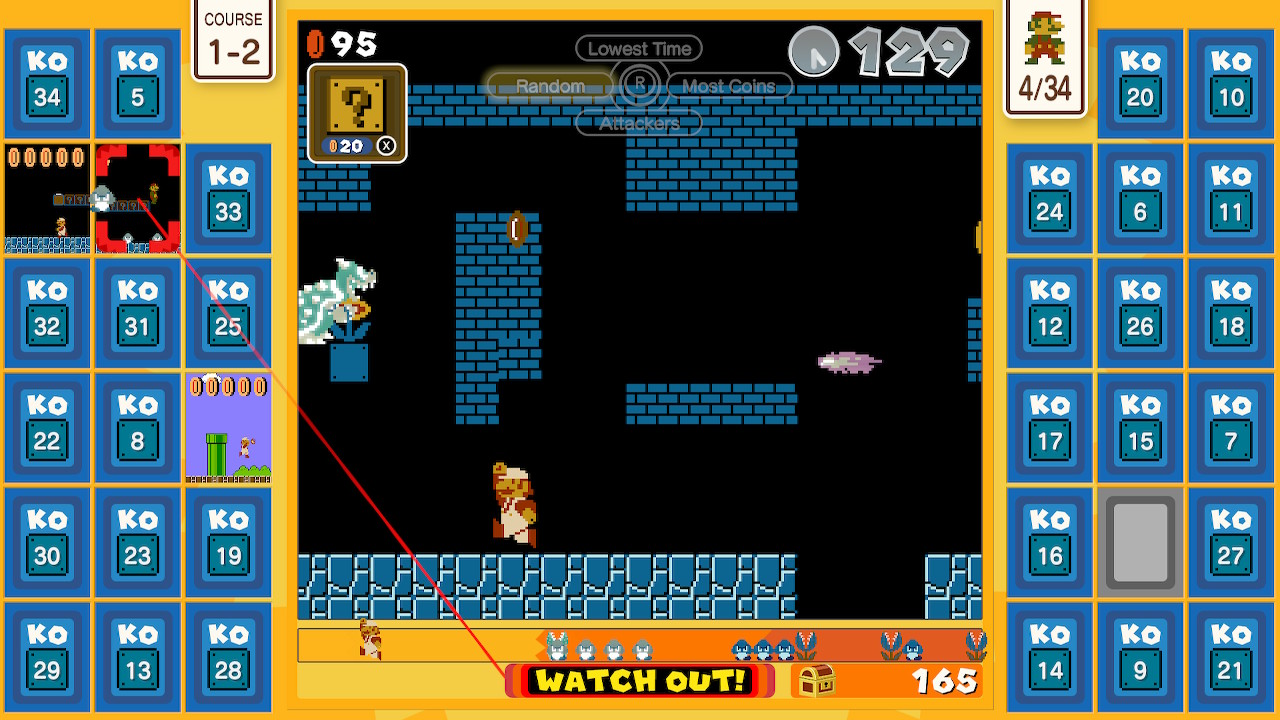 Important! Mario's movement defaults to the D-pad. As the Switch D-pad isn't its best feature, many of you will probably prefer playing with the analog stick. You can change this in the Options (along with the run/jump button setting).

Opponent selection is handled by whichever movement method is left over. (The right stick selects the targeting category as in Tetris 99.)

If you're a Nintendo Switch Online subscriber, you can download it for free right now from the eShop. It's only playable until March 31, 2021 however.

It's a great twist on a time-tested game that makes it feel fresh again. Movement feels authentic to the original, which is both a positive and a negative: if you're used to Mario Maker's somewhat "averaged" Mario mechanics, it'll take a bit of getting used to going back to the original here.

While I'm having a lot of fun with it right now, Kyle Orland brings up some apt criticisms: the level unlock system means you'll see a lot of the early levels over and over. (This could improve as players unlock more of them -- it's only been one day as I'm writing this.) More fundamentally, the endgame can slow down tremendously as players grow cautious and try to wait each other out, racking up bonus seconds and treading carefully. Garbage enemies aren't quite the threat Nintendo wants them to be here.

But overall it's a great time and it's free (if you're already paying for the online). You should try it.

After the brilliance of Tetris 99 I'm really looking forward to giving this a try (even though I'm not particularly good at SMB).

Unfortunately for me I'm working all weekend and have a brutal week of work ahead. Hopefully everyone isn't amazingly good at the game in a weeks time.

Nintendo Life played a bit more than Ars and notes the level variety and interminable endgame both improve with enough playtime. It can take several hours to see it, though:

JimiNutz said:
Hopefully everyone isn't amazingly good at the game in a weeks time.
Click to expand...

We'll see, but SMB doesn't seem to me like the kind of game that most people aim to master in the way they do Tetris. I suspect the online will continue to largely consist of folks muddling through for fun -- at least I hope so.

iconmaster said:
We'll see, but SMB doesn't seem to me like the kind of game that most people aim to master in the way they do Tetris. I suspect the online will continue to largely consist of folks muddling through for fun -- at least I hope so.
Click to expand...

I couldn't resist and jumped on for a few mins.
Managed to get to the final 4 on my first game I think although I only muddled through to world 1-2 lol

I can see myself playing this a lot when time permits.

Downloading now. This looks fun and I can't wait to stomp on some absolute peasants online.
L

Thanks for doing this

iconmaster I have been having a lot of fun with it.

I once passed SMB without dying once (I used all the shortcuts, but I still impressed myself lol)

This is fun, but the core idea is not as good and clean as Tetris 99.

I spent more time loading and getting connection errors, but it was a lot of fun. "Boring" early levels suddenly become far more challenging. Great way to refresh the old content which is saying something, since this is Nintendo we're talking about.

Got 4 wins today, one of them in the special challenge. Game is fun as shit, especially the late game strategy. I’m consistently top 2-4 as long as I don’t miss an easy jump or something early

This is fun. Not ‘drop your phone and check it out right this minute’ fun, but certainly something cool and enjoyable to check out, or kill a few minutes with. I’ll have to see where I stand after a bit longer.

I kind of see why it’s a limited time game, though. I think it’s really neat as an event everyone’s playing for the 35th, but as a permanent game, I don’t know that it has staying power. It’s more of a silly gimmick that will put a smile on your face.

Can anyone explain to me how it works to unlock new levels? The “Special” challenge seems to go through all levels in progression, but what’s the deal with the normal challenge? What difference does it make the level that I can choose before the race begins? Like, why do I randomly get to 2-1, 3-2 or 3-4 but then get back to 1-1 so many times?

The game is quite fun, but gets a bit repetitive quick with so many reruns through 1-1 and 1-2. Some levels are particularly nasty - getting Bowsers and piranha plants in 2-3 is terrifying, as if the level wasn’t tense enough with all the Cheep-Cheep flying around, lol.

The physics are definitely a little different from the original. Nintendo Life mentions this as well.

iconmaster said:
It's only playable until March 31, 2021 however.
Click to expand...

Minor bump just to link this video. Kosmic is a record-setting SMB speedrunner, so he knows from Mario Bros. His assessment of the SMB 35 physics is that they're decently true to the original, though some of the exploits he's used to having access to aren't supported.

it's nice to see mario return to its platforming roots, even if it is a giant marketing gimmick

Got my first victory yesterday.
This is a big deal for me as I suck at 2D Mario.

Girlfriend is still addicted to it and won't get off my Switch.

iconmaster said:
Minor bump just to link this video. Kosmic is a record-setting SMB speedrunner, so he knows from Mario Bros. His assessment of the SMB 35 physics is that they're decently true to the original, though some of the exploits he's used to having access to aren't supported.

The swimming in particular feels totally different. It's much faster.

Kosmic has a really helpful breakdown of how the SMB 35 coin scoring works. Key takeaway: sticking with small Mario at the start of the game (rather than purchasing a power-up) will double your score.

Also, this game turns into an entirely different experience when you've got really good players fighting it out. 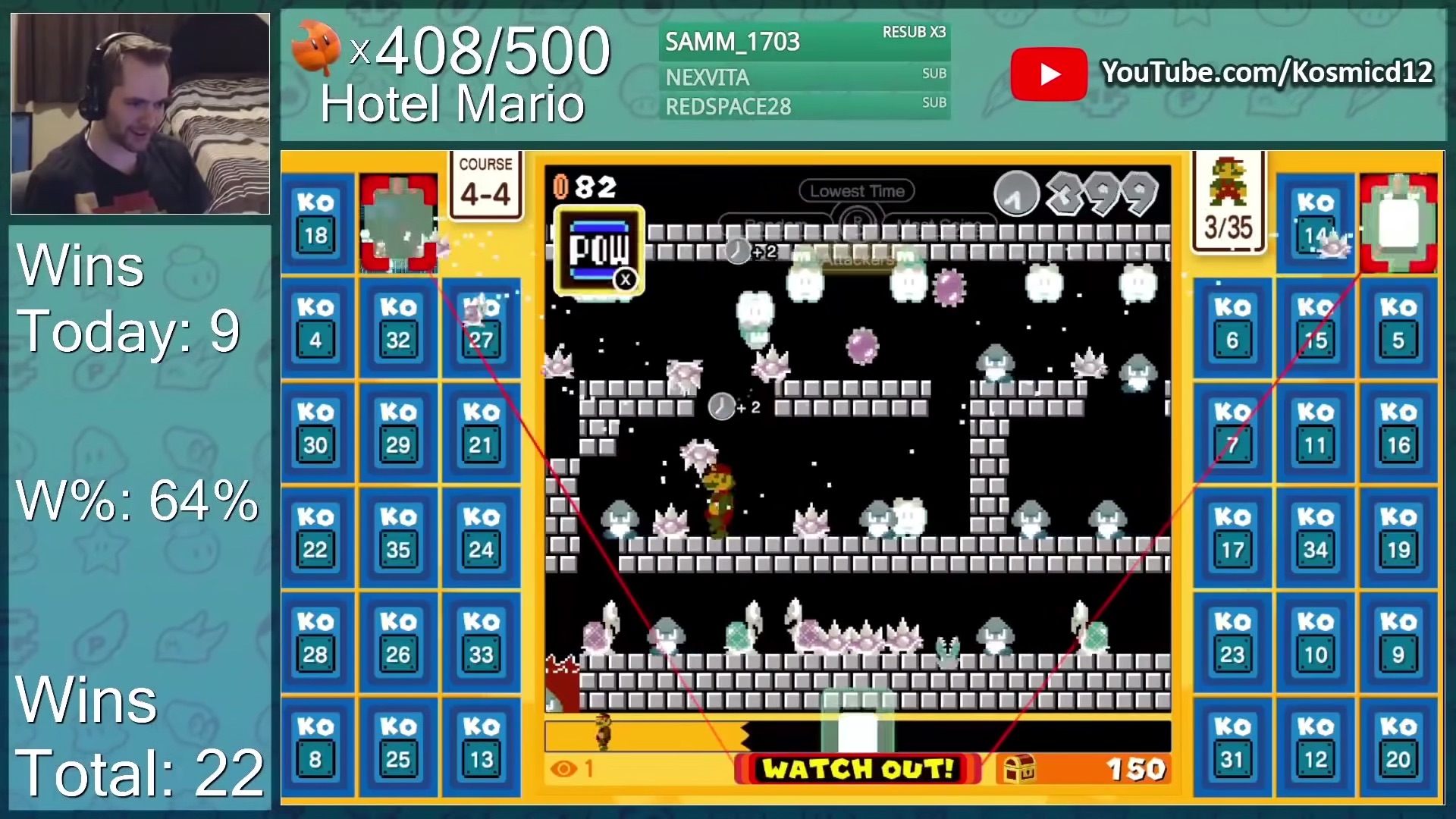 crunchyBiscuits replied
Aug 18, 2022
my thoughts on the first chapter of Bug Fables
Opinion