So, forget about MS and Sony for a while. Who's your favourite in THE OTHER FIGHT?

I think the last Sega game I played was Valkyria Chronicles, either that or Virtua Fighter 5 back on PS3, and I don't buy Nintendo hardware since the wii, it's just too archaic. So, no, no dog in that fight. Back in the 8 bit/16 bit days though, I was team Nintendo all the way.

Oh wait, they published the first Bayonetta, right? I did play that.
Last edited: Apr 4, 2021

I loved Sega on Mega Drive, I love Sega on PC and I love Sega as a third (Yakuza, Valkyria Chronicles, Persona...).


So Sega! The only thing from Nintendo that I once enjoyed was Pokemon...
Last edited: Apr 4, 2021

The one that owns Creative Assembly.

Sega basically just makes Yakuza games now pretty much. Which is a good series for sure but not my favorite.
I mean if Sega were still publishing Platinum Games projects I'd maybe give it to them. But they gave up/didn't have enough money for that and Nintendo had to save Bayonetta 2, so......

Yeah I don't even care for Nintendo that much nowadays either. Loved BotW but that's the last game they made I've enjoyed. I'm a huge Metroid fan so I hope Prime 4 is good but all the delays make it hard to get excited. Same goes for Bayonetta 3. I'd be hyped for that if they showed anything.

Nintendo’s characters get eyes on them and are overall more important than SEGA’s nostalgia even with Yakuza being a hit today.

Sony and MS are always second to me. Nintendo always has that one game that gives me that same feeling I had when I was a kid playing a really great game for the first time.

What fight? They've been bros for awhile.

Sega has made and published some great software, while Nintendo has focused more on hardware. I say it’s a tie.

Nintendo’s first party offerings are garbage. They can’t make a fun videogame to save their life, but the Switch is such a brilliant innovation of gaming convenience. It seems stupid, it’s just a tablet really, I can’t explain it. I fucking hated their wii consoles.

This is my Switch playtime...do you see many first party games there? 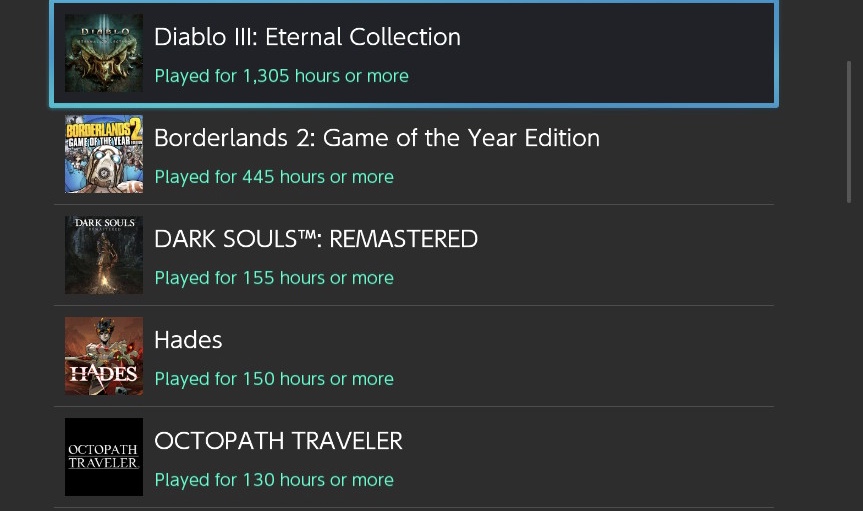 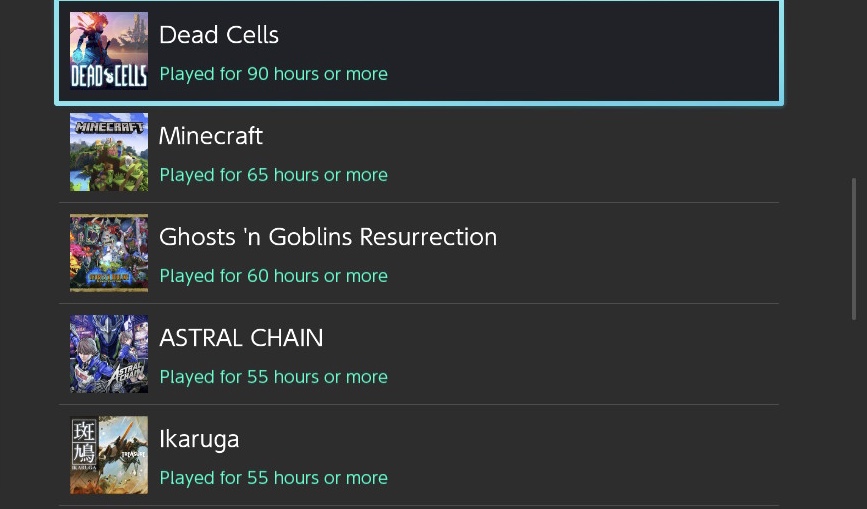 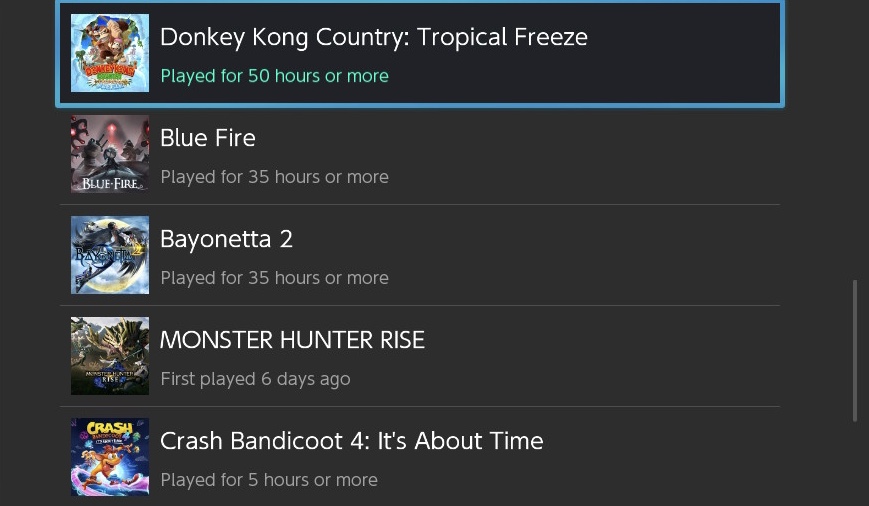 
Mario is now an adventure collectathon. Like an old Rareware game, I’m collecting hearts and stars and clovers in each level. Didn’t this used to be a platformer?

Zelda has no dungeons or the tool upgrades you used to find in each one. It’s a terrain demo with outfits you buy at the shopping center to keep warm. It’s like my mom made this game. Don’t forget your sweater honey, it’s too cold out for your adventure!

If you put a different protagonist in Nintendo games, with a different developer name on the package, nobody would give a shit.

They consolidated console and handheld hardware and yet still can’t release anything interesting at all to play.
Last edited: Apr 4, 2021

Total War & Football Manager are huge but yeah not much compared to Nintendo.

The one whose games will be coming to GamePass day 1 soon enough...

My first ever console was the Sega Mega Drive but my favourite Sega games have been their PC output (Total War). Never got into Sonic but really enjoy Zelda, Mario and Metroid. So I would say Nintendo but with the caveat that I've never tried any Yakuza or Atlus games as they never looked appealing to me. So maybe I am missing out and just not realising it.

Lol, some got a lot of nerve to say Sega is only Yakuza since they ignore their new IPs (classics now) on PS360 and now will criticize Sega for porting them on PS4 (like Nintendo did with Wii U games on Switch)

Yeah, there are less diversity than before but more than most publishers

Age of Empires 4 (developed by Relic)

House of the Dead Scarlet Dawn

I didn't put a load of obscurs (but still fresh) arcade games but there is still more IPs than 95% of publishers.

Plus, Utsumi (Dreamcast line up) is back at the head of Sega Japan Studios since 2020 which means we'll see more diversity and new franchises overall:

Sega could do better, that's true, but it's a little miracle to see them high in the charts and critics. (took more than 10 years to recover from the bankrupcy)


With all that war chest, Nintendo should be 10 times more competent than Sega with 10 times more outputs.
It's a David vs Goliath battle and Nintendo is not that impressive regarding their history, their fate.
They have good outputs, that's a fact. But honestly, they could do so much better with all that money.
Last edited: Apr 4, 2021

The GameCube/Xbox/PS2 gen was epic from Sega. They’ll always have a special place in my gamer heart.

apart from the Persona/Shin Megami/Football Manager games i'm not interested in anything SEGA does.

mcjmetroid said:
Well sega keep winning the Metacritic best publisher so it's gotta be sega. They have been very consistent over the past few years.

Nintendo has disgusted me in the past few years so.

What disgusted a Nintendo fan, i'm curious. (i already know about the Sega/Shining/Shenmue fans)

i loved both systems and i even went balls deep with sega and bought 32x..mega cd when they launched but overall nintendo was the console i ended back with

Huh, Sega in a poll? Did I miss something last Wednesday?

The_Mike said:
Huh, Sega in a poll? Did I miss something last Wednesday?
Click to expand...

I don't really want to detail the thread too much. Although I suppose this is relevant.

I started off very high at the beginning of the Switch towards Nintendo but it declines after year 3 of the console.

mcjmetroid said:
I don't really want to detail the thread too much. Although I suppose this is relevant.

I started off very high at the beginning of the Switch towards Nintendo but it declines after year 3 of the console.
Click to expand...

I see, thanks.
My last Nintendo console was the gamecube (adorable powerful and cheap console)
When Nintendo tried to sell us almost the same hardware (the Wii) at full price, i quit.

SEGA has the IPs to rival Nintendo and even

BUT
Sega hasn’t made a game as a developer in eons. Publisher to me doesn’t count. Do they even have a first party still working on games? The only game they have in the works is Panzer Dragoon iirc. The spiritual successor to Sega in my mind is Platinum Games.

perhaps when MS leaves the console war SEGA can be resurrected and collab with MS to develop an ACTUAL Dreamcast 2
Last edited: Apr 5, 2021

Terrible_Majesty said:
SEGA has the IPs to rival Nintendo and even

BUT
Sega hasn’t made a game as a developer in eons. Publisher to me doesn’t count. Do they even have a first party still working on games? The only game they have in the works is Panzer Dragoon iirc.
Click to expand...

You got it all wrong. (reversed reality)
Panzer Dragoon is not their only game in the works, it's the only game they just licensed (to Forever Enertainement and Wild Man) if you check the list i gave.

On the same page, developed by :

Atlus (Atlus is Sega though)
5%


On the other hand, it's not like Nintendo had no partners developing for them:

I've just bought Persona 5 Strikers and Yakuza Like A Dragon, so I'll go with SEGA (I don't own a Switch).
You must log in or register to reply here.

SteadyEvo replied
Sep 19, 2022
Did anyone else think that the Nintendo Wii was going to be the best selling console ever back then?