Rumor: Horizon Zero Dawn Remaster in development as well as Multiplayer Project based on Horizon 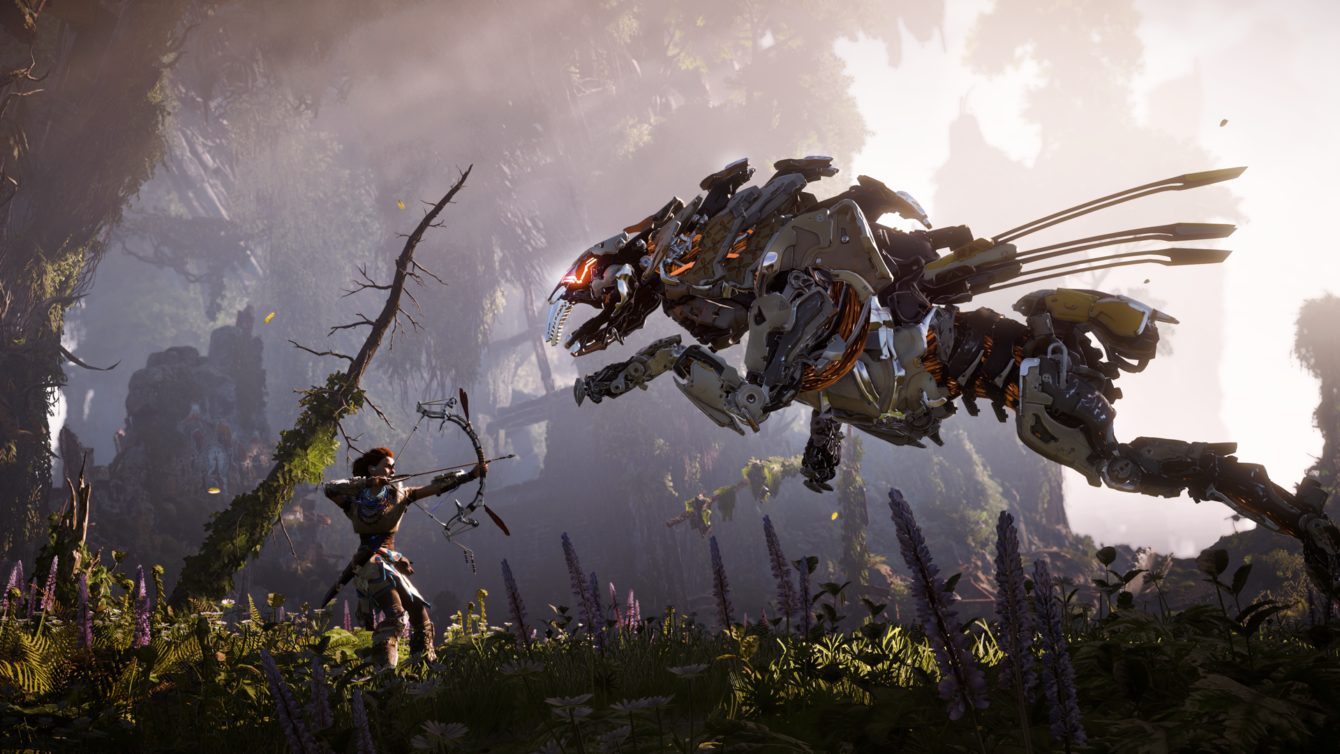 Guerrilla is currently developing a Horizon Zero Dawn Remake/Remaster, as well as an online multiplayer game set in the Horizon universe.
mp1st.com

If you thought The Last of Us Part 1 divided players up on whether or not a game needed a remake, prepare yourselves as it has been revealed to us that PlayStation is now remaking or remastering (details are still unclear) Horizon Zero Dawn, a game that is only five years old and had its sequel released earlier this year.
Our source didn't elaborate whether or not this was a "built from the ground up" style of remake, however we were told that the remake features an improved lighting system (ambient occlusion, and such), overhauled textures. and better animations, with new character models to match those found in the sequel, Horizon Forbidden West.

Outside of that, we were told there is big focus on bringing the accessibility options that the sequel introduced. Different graphic modes will also be available, though that is a given since most PS5 games have a performance, quality, and uncapped performance to take advantage of VRR (variable refresh rate). For gameplay changes themselves, there are some subtle improvements, mostly those being the quality of life improvements the sequel brought. It wasn't confirmed whether or not we would see flyable mounts, or a glider, though we suppose that is unlikely given to their story related importance in the sequel.
Click to expand...

I really hope this is some sort of silly joke.
P

Now let's see how people twist that into a good thing.

Fucking retarded if it's actually a remake.
Last edited: Oct 2, 2022

I'm going to doubt this, I would like to think Sony isn't this silly...

modiz said:
Now let's see how people twist that into a good thing.
Click to expand...

I mean why stop here. Make a remake of Horizon Forbidden West. You know what? why stop here even. Make 2 versions of every upcoming game and release the remake version a month after the first.
Last edited: Oct 2, 2022

Do it. I double dog dare you. Horizon Zero Dawn was excellent. There were so many times I paused and took photos in that and Horizon Zero Afternoon. Fuck me up fam. I’d take a next gen only remake.

Remake Killzone 2 instead i hope this is a joke
O

They should remake The Last Of Us Part 1.

What's next, God of War remake?

If you're going to remake something then remake bloodborne you fool.

I knew another remake or remaster was coming.

This doesn't surprise me. Game development is getting longer and Sony needs exclusives to pad their list.
Simply remaking games is a quick and easy thing to do. I'm pretty sure this multiplayer project is probably going to reuse a lot of assets and animations as well.
L

Lmao, is there any show coming for this IP ? they are trying to make money from TV series fans if it's a hit.

GHG said:
If you're going to remake something then remake bloodborne you fool.
Click to expand...

No cap. That's the only game I could think of from the last gen that needs one.

Yeah I cannot rock with this. The original game's still perfectly playable, even more so than TLOU Part 1. In fact some people seem to prefer HZD to HFW (I'm not one of them).

If this is a free update for the existing game and something in a package those who don't own the original can get for say $40, then...fine I suppose. There are other PS games that could really do with a remaster or a remake that would grab my attention a lot more, but at least this way people who already have the game aren't paying out for features you can probably enable for free through hacks on PC.

If that isn't an option though, and full-priced to boot...just not worth it. The rumored MP game is the more interesting of the two rumors anyway, I just wonder what that may entail for Monster Hunter on PlayStation going forward because there might be some competition between the two, same as that rumored Certain Affinity MH-style game for Xbox. Could give Nintendo a chance to work out a really good deal with Capcom on future Monster Hunter games.

See, THAT'S a game that would actually be worth doing a remake for. Lots of potential unrealized. But somehow it's too "risky" to do? Makes no sense to me.

In general the recent remakes strategy from Sony isn't really doing what it could be doing. These are really safe picks, TLOU and Horizon, with original versions still perfectly playable by modern standards. I preferred when they were remaking stuff like Demon's Souls, Shadow of the Colossus, etc. Remake Legend of Dragoon, Omega Boost, or Tomba! That's the real potential for remakes IMO.
Last edited: Oct 2, 2022

Putonahappyface said:
I knew another remake or remaster was coming.

TxKnight7 said:
Remake Killzone 2 instead i hope this is a joke
Click to expand...

this would be godly

That would actually be a good idea as the current game is so dated it's unplayable for me.

The one remake they need to do is Driveclub.

I mean, no one here has to buy it or should feel obligated. If they really are 'remaking' the first, then just ignore it.

Ah yes, a remake of a 5 year old game that got a complete edition and that's on PC , is exactly what i need.

Goddamnit I've been waiting FOREVER for a GoW Ragnarök remake and now this.

Soon their gonna remake days gone and ghost of Tsushima too lol. Makes sense though people keep buying them

Expectation: MGS remake.
Reality: Horizon remake no one ever asked for.


sainraja said:
I mean, no one here has to buy it or should feel obligated. If they really are 'remaking' the first, then just ignore it.
Click to expand...

If that meant that the next Guerrilla game would be delayed for years it would be a complete shame.
Last edited: Oct 2, 2022

Patrick S. said:
The one remake they need to do is Driveclub.
Click to expand...

I could get behind this along with a PC version but no chance of that happening due to licensing.

This CAN'T BE TRUE!!! If this is Sony's gameplan this gen, it's asinine.

This has to be false. If anything it will be a nominal remaster at $39.99 for the masochists.

And they're not even remakes. They are just relaunches with updated graphics.

Sony deceiving that they are remakes when they are not even that.
L

sainraja said:
I mean, no one here has to buy it or should feel obligated. If they really are 'remaking' the first, then just ignore it.
Click to expand...

true but Sony providing us with top tier entertainment what next GOW Remake ?

Putonahappyface said:
That would actually be a good idea as the current game is so dated it's unplayable for me.
Click to expand...

It was dated at launch.

What are they going to add, another werewolf fight and a few more QTE’s?

Patrick S. said:
The one remake they need to do is Driveclub.
Click to expand...

Stop, my heart is already broken. No need for more

What makes it believable is that there is a TV series coming... Sony is way too full of themselves.
Last edited: Oct 2, 2022

remember_spinal said:
I will bet anything its more of a ps5 remaster “directors cut” and not a remake
Click to expand...

Even in that case, there should probably be an option for those who've purchased the original game (and especially HZD & HFW) by a certain date, to get the updates for free. These aren't archaic games, and you can already force a lot of these updates as hacks in the PC version most likely.

The point of the Director's Cut should be to provide convenience for first-time buyers who want all benefits in one simple package, but for a game as recent as HZD it shouldn't be the only means of playing it with updated features IMHO.


sainraja said:
I mean, no one here has to buy it or should feel obligated. If they really are 'remaking' the first, then just ignore it.
Click to expand...

I agree, and of course the usual suspects will use it as fodder for anti-PlayStation/anti-Sony ammo. But when you're picking games still as modern and playable as HZD to remake only 5-6 years later, it's not like Sony is making supply for those narratives hard to come by.

Hopefully we get some remakes or just straight-up sequels in IP that would actually do something to maximize the idea of a remake or such (especially for me). People want a Bloodborne update, remake, or sequel. Other people ITT have mentioned The Order and Driveclub, both perfectly suitable for a remake. I personally would love a remake for something like Omega Boost, or Legend of Dragoon, or suchlike, even though their chances are probably quite slim in reality.
Last edited: Oct 2, 2022

edit: not worth the latecomer quotes
Last edited: Oct 3, 2022

Ehhh Dusk Golem is actually pretty credible when it comes to Capcom stuff. Are you just salty over his Silent Hill stuff? We know it's coming, just a matter of when.

I mean they forced you into the original games map for 10_fucking_hours so I'm not surprised to see this if it's true at all.


Anywho, does the game even get good? I legit quit after it finally opened because it bored me to tears, maybe I'll go back after Ragnarok but it was a TERRIBLE first impression.
T

60 fps patch would be nice…
You must log in or register to reply here.