The Platformer, one of gaming's earliest genres. While it's existed throughout the generations in a variety of forms, it was ultimately the rise of the 3D era that created a brand new sub-category of the genre, the 3D Platformer. Sometimes referred to as a collect-a-thon due to the focus on a large amount of collectables. Nintendo helped kick the door wide open with Super Mario 64, a launch title for the long-delayed Nintendo 64 in 1996. Leveraging the Nintendo 64 hardware and controller to show the entire industry exactly what 3D can really do for gaming.

But Mario wasn't alone in this polygon revolution, that same month, developer Naughty Dog teamed up with Universal Interactive and Sony Computer Entertainment to launch Crash Bandicoot, exclusively for Sony's then new PlayStation. While not as revolutionary as Mario's outing, the crazed Marsupial successfully translated the core mechanics and linearity of 2D platforming design, into a 3D game, and gave Sony a mascot to challenge Nintendo's mighty Plumber.

This opened the flood gates for every single company to take their previous platformer mascots into 3D, or create new 3D platformers to challenge Mario and Crash. Gex, Glover, Spyro the Dragon, Croc, Rayman 2, Sonic Adventure, Banjo Kazooie, Donkey Kong 64, and many others. Some succeeded, other failed, but the platformer remained one of the industry's defining genres. 3D Platformers later evolved as we moved into the 6th generation. Not only incorporating seamless, open worlds into their design, but also evolving to be more complex, edgier, even more mature in some cases, as they also incorporated elements of other genres like shooting and stealth. Conker's Bad Fur Day, Ratchet & Clank, Jak & Daxter, Sly Cooper, Blinx: The Time Sweeper, Sonic Adventure 2, Prince of Persia: Sands of Time, even niche games like Kya The Dark Lineage and Whiplash, all were a bit more sophisticated over the 32-bit platformers of the previous gen, thanks to more powerful hardware, and an aging gaming audience. Even as games like Grand Theft Auto III, and Halo: Combat Evolved popularized new types of gaming on consoles, many gamers still had a soft spot for running and jumping.

Then 7th generation happens. Suddenly, 3D Platformers, and Platformers in general, slowly begin to disappear from store shelves for shiny new HD consoles. What happened was that big games now needed to be even bigger. The standards that the HD era brought required larger budgets, and more development time, not helped by the fact that one of those HD systems, was designed around an obtuse, headache inducing Cell Processor, making development even more expensive and challenging than it needed to be. As a result, publishers could only afford to put out games that had maximum sales potential, which meant that the platformer had to be cut. Because another problem was that the perceived notion by publishers, that gamers, who were now mostly grown adults, didn't want to play as a fury animal jumping around in colorful worlds anymore. They wanted dark, gritty, action games and shooters that reflected the sophisticated tastes of their adult selves.

Lastly, A large reason mascot platformers were so prevalent in past generations, was due to hardware limitations. Consoles couldn't quite do full Hollywood style experiences just yet, so a cute mascot was an easy way showcase the power of a new generation, while working within the restraints of the hardware. But by the 7th generation, consoles were powerful enough to deliver the full-fat cinematic experiences developers had always wanted. Why bother making some cartoons, when you could instead focus on Mo-Capped, realistic humans in realistic worlds much more easily now? All those reasons, led to the genre's massive decline on PlayStation 3 and Xbox 360, with AAA games instead working light platforming elements into otherwise, action-oriented games. By 2009, the only major publisher releasing straight platformers of any kind regularly on home consoles, was Nintendo with the Wii (On that note, the Wii was a heaven of a console if you were a fan of platformers). Luckily, the Handhelds that gen, PlayStation Portable and Nintendo DS helped keep the 3D Platformer alive to a degree, thanks to their 3D capable hardware, and less daunting development costs. And even on consoles, there were some standouts, While Naughty Dog and Sucker Punch have moved away from "childish" platformers, Insomniac Games continued with Sony's Ratchet & Clank series with the PS3 entries, dubbed the "Ratchet & Clank Future" Saga. Battlefield developer DICE made a rather unique attempt at the genre with the first person, Mirror's Edge. And Mario once again saved the day by delivering Super Mario Galaxy and its sequel, hailed as masterpieces of their respective generations.

But things started picking up a bit in the 8th generation. Learning from the mistakes made with the PS3, Sony based the PlayStation 4 around a cheaper, simpler, and no-frills x86 PC processor, which combined with support for today's modern engines, made game development far smoother, easier, and for many developers much more affordable than the 7th generation. The first game Sony demoed for its shiny new next gen console? Knack, a throwback to the PS1/PS2-style 3D Platformers of Yore. Mock it all you want, but I believe Knack helped jumpstart a resurging interest in 3D Platformers. Shortly afterwards, numerous Kickstarters popped up for games in the genre such as Yooka Laylee, which was a throwback to N64 style 3D Platformers with next gen technology. While Yooka Laylee's final product was... Eh.. The massive success its Kickstarter, and the Kicstarter for the similar (albeit much better) A Hat in Time experienced showed that gamers still want 3D Platformers, and platformers in general.

Today, the 3D Platformer, while not quite back to its former glory yet, is slowly making a steady comeback. Mario is still as gold as ever with Super Mario Odyssey on Nintendo Switch, and Activision finally made the move revive Crash Bandicoot and Spyro the Dragon the way they should've been, with full on remakes of the PS1 trilogies on modern consoles, which received strong sales and critical acclaim. Plus, thanks to the evolved storefronts and digital policies of consoles, independent developers nostalgic for the good ol days can finally preserve those memories in a new form, without the overbearing nagging of the suits at publishers like EA or Ubisoft telling you that's not what gamers want anymore.

Hopefully, next generation finally returns the 3D Platformer back to the big boy table after years of absence.
Last edited: Jun 9, 2020

It doesn't really feel like a rise again but hopefully things get better. Would be cool if Microsoft funded a 3D platformer from Moon Studios.

A Hat in Time is amazing, I hope a sequel is in the works

Well Nintendo never gave up on the genre. Which is why the only console I own is a Switch.

Never been a fan...
I think the only one i ever played was the pandemonium demo on PC many years ago...

Seems that don't sells well...a game like super lucky tale don't have the appeal of a God of War or Spiderman game

Only Nintendo makes truly great ones so there's no rise or fall, just their consistently awesome output. Some nice indies occasionally, like Poi or Skylar & Plux, but it's slim pickings and some of the most overhyped like A Hat in Time aren't great either. Same for so called classics like Rayman 2.

nikolino840 said:
Never been a fan...
I think the only one i ever played was the pandemonium demo on PC many years ago...

Seems that don't sells well...a game like super lucky tale don't have the appeal of a God of War or Spiderman game
Click to expand...

Pandemonium isn't even a 3D platformer, lol, it's 2D left to right gameplay with 3D graphics. So you've never played any. As for their appeal, when they're great like a mainline Mario obviously they do rival Spiderman or God of War in appeal, subjectively for gamers and objectively for the market.
Last edited: Jun 9, 2020

nikolino840 said:
Never been a fan...
I think the only one i ever played was the pandemonium demo on PC many years ago...

Seems that don't sells well...a game like super lucky tale don't have the appeal of a God of War or Spiderman game
Click to expand...

That's really 2.5D though.
I think platformers work best with 2D gameplay, however, one with 2.5D (2D gameplay 3D graphics) has the opportunity to change it up, have full 3D sections, etc.
I think a mix of both is the best.

Some games are alright, the recent 3D mario games are good but i can't help but feel they're unprecise compared to the 2D ones.

At least link to the song OP

Al3x1s said:
Only Nintendo makes truly great ones so there's no real rise or fall, just their consistently awesome output. Some nice indies occasionally, like Poi or Skylar & Plux, but it's slim pickings and some of the most overhyped like A Hat in Time aren't that great either.

Pandemonium isn't even a 3D platformer, lol, it's 2D left to right gameplay with 3D graphics. So you've never played any. As for their appeal, when they're great like a mainline Mario obviously they do rival Spiderman or God of War in appeal, subjectively for gamers and objectively for the market.
Click to expand...

For me was 3d enough then

I think we might see yet another renaissance of 3d platformers in this upcoming generation as the dev tools to make these sort of games get easier to use and more accessible. The market is currently flooded with 2d platformers (especially of the metroidvania sort) and I expect the main reason we don't see a similar flood of 3D platformers yet is because they're harder and more expensive to make well.

Do you think 3d platforming was diluted / split across genres this generation? When I think of "3d platforming" I generally think of SM64 or Ratchet & Clank, but there are quite a few Western platforming games like Prince of Persia, AssCreed, Uncharted, and Mirror's Edge. These aren't generally compared side by side with the likes of SM64 though, and I wonder why.

I think for the genre to move forward instead of being caught in perpetual SM64 glorification, there needs to be a reckoning between the Western 3d platformer (Uncharted, PoP, etc) and the traditional 90s-era 3d platformer.
E

My daughter(3,5 years old) and i like to play 3d platformers a lot. We are having fun with Yooka-Laylee(don't mind reviewers), Super Lucky's Tale(again)(if you can, play "new" one), Kao the Kangaroo: Round 2, Super Mario 64, Spyro, Croc, and recently, Suzy Cube(which is a great game!). I'm waiting for the next Kao game which launches in 2021. I hope there will be a sequel for Suzy Cube!

I think this type of games won't die easily. They are fun, easy to pick up and play and look great. I hope we will see more great titles in this genre in the future.

If anyone recommends me these type of games for PC, especially for younger kids, i would appreciate it.

Highly recommend people check this game. Kinda feel this one flew under the radar and it's honestly a fantastic game for fans of platformers. And thankfully it gets progressively harder and doesn't let you steam roll through the levels to finish the "story" like some other games in the genre. 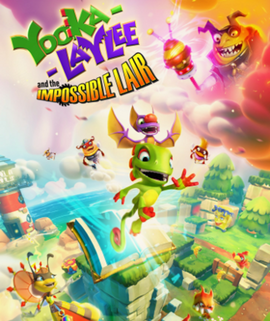 Since Sony is releasing their games on multiple platforms now, it make sense for them to resurrect their dead portable franchises on Nintendo Switch
2

Griffon replied
May 20, 2022
Do you think the platform a game comes out affects its actual review scores and general consensus around it?