Omnipunctual Godot said:
Unfortunately, I don't think Sony would let Guerilla work on a new Killzone with the success they've seen from Horizon.
Click to expand...

If someone could erase Shadowfall from my memory I would've wanted a new Killzone, I loved 2 and 3 but despise Shadowfall.

Black_Stride said:
A waste of resources.
A good single player battlefield wont sell well or keep numbers or drive profits.
See Battlefield Hardline, say what you will about the limited MP (which had a great Rush mode btw) but the single player campaign of Hardline was legit good but so few people even bothered to give it a chance.

But maybe your wish will be fullfilled as Vince might be helping with campaign at DICE LA.
Click to expand...

Single player in a general sense. No fans of BF campaign because of the poor execution..

They may as well go f2p at this point.

Dice needs to bring back bots for offline big battles. Worked extremely well for Battlefront 2 and honestly if the SP is subpar at least we can play all weapons and vehicles on all maps offline.

Battlefield has never had a good single player campaign except the Bad Company games were ok. Don't know why you'd think it would. 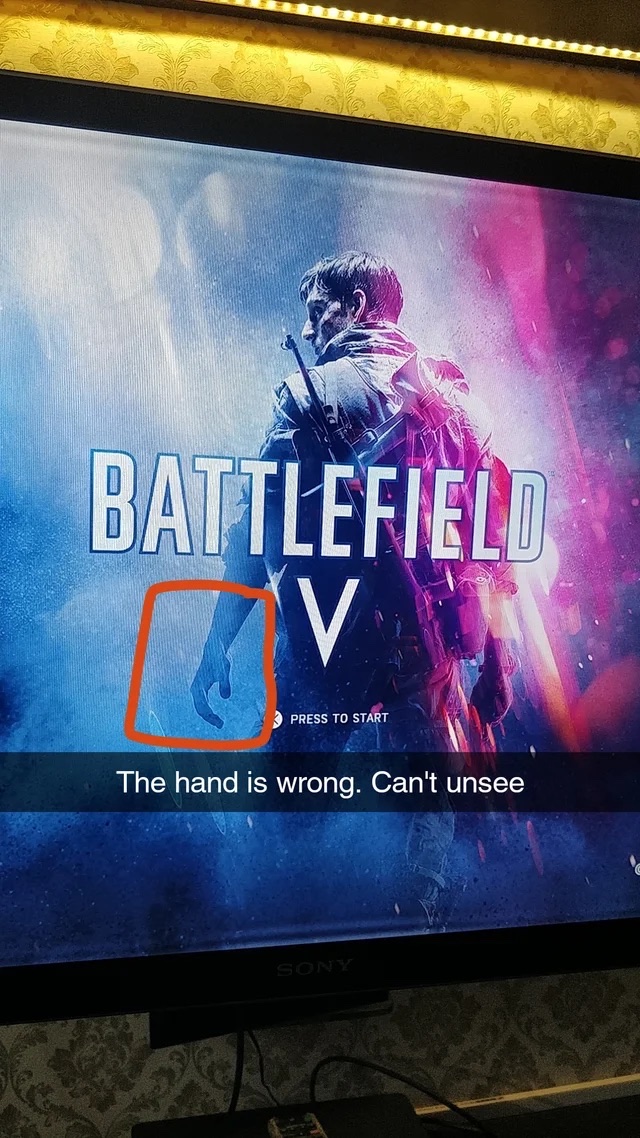 Have any of the BF games had a fun SP?

Making a good FPS campaign is a rare skill to possess these days.

Lol battlefield should be mp only, conquest and rush mode focus, 20 maps at least. Everything else is a waste.

Battlefield 1 and 5 have really lazy single-player modes. I'm not saying 3 and 4's were great. Even as someone who likes the dollar coaster sp that is CoD's, BF was a bit lacking. But the answer was to not give up. I'd take them over whatever the hell 1 and 5 do.

But then again 5 is just a bad game in general.

Its literally a photograph, so the hand cant be wrong, bad TV settings is the only way you could think the hand is wrong. assurdum said:
After Battlefield 1 I really don't understand what's up to Dice. It's practically from Battlefield 4 can't deliver a decent sp campaign. Finished Battlefield 1 but the 5 seems to have the same issue. Splitted scenario and characters, but more frustrating seems a big puzzle bad assembled, mainly I don't understand why the missions are segmented in such structure, place the bomb going there and so on. Seems they took the multiplayer elements and put a story behind, nothing more. A new issue in the graphic, on Pro the bounces lights now are very jaggies, I can't stop to fix them how annoying they are. But anyway I haven't great faith for the next one. I know it's quite bizzarre complaint about the sp mode in a FPS but bizzarly I love to play solo campaign in such games

Bad Company 2 had a fun campaign, the MP was awesome too but they don't want to be that kind of fun. The amount of destruction was great, PC players put it down because they say it was BF dumbed down for consoles but it was by far the most fun I've ever had with BF single player or MP.
Reactions: TheZink and ZywyPL

When the Theme For Kjell kicked in during the BF4 campaign, that was so epic. Amazing OST.

Remember those coop missions from BF3? I loved those. The helicopter mission was a nightmare though.

BC1&2 were the only SP campaigns that were really, really good and fun, DICE was able to create a cast of characters you could sympathize with, and for whatever the reason they were never been able to recreate that in further installments, great graphics and nice set pieces alone are simply not enough to create a great SP experience, there has to be an interesting story and characters behind it.
You must log in or register to reply here.

Total War: Warhammer 2 Lttp. Why did no one tell me this was sooooo good?

Nov 9, 2020 started Krappadizzle
Nov 10, 2020
A.Romero
Opinion Business Platform Sony's Blockbuster Focus Reminds Me Of Nintendo During N64, And That Could Be Disastrous (Or Perhaps Not)