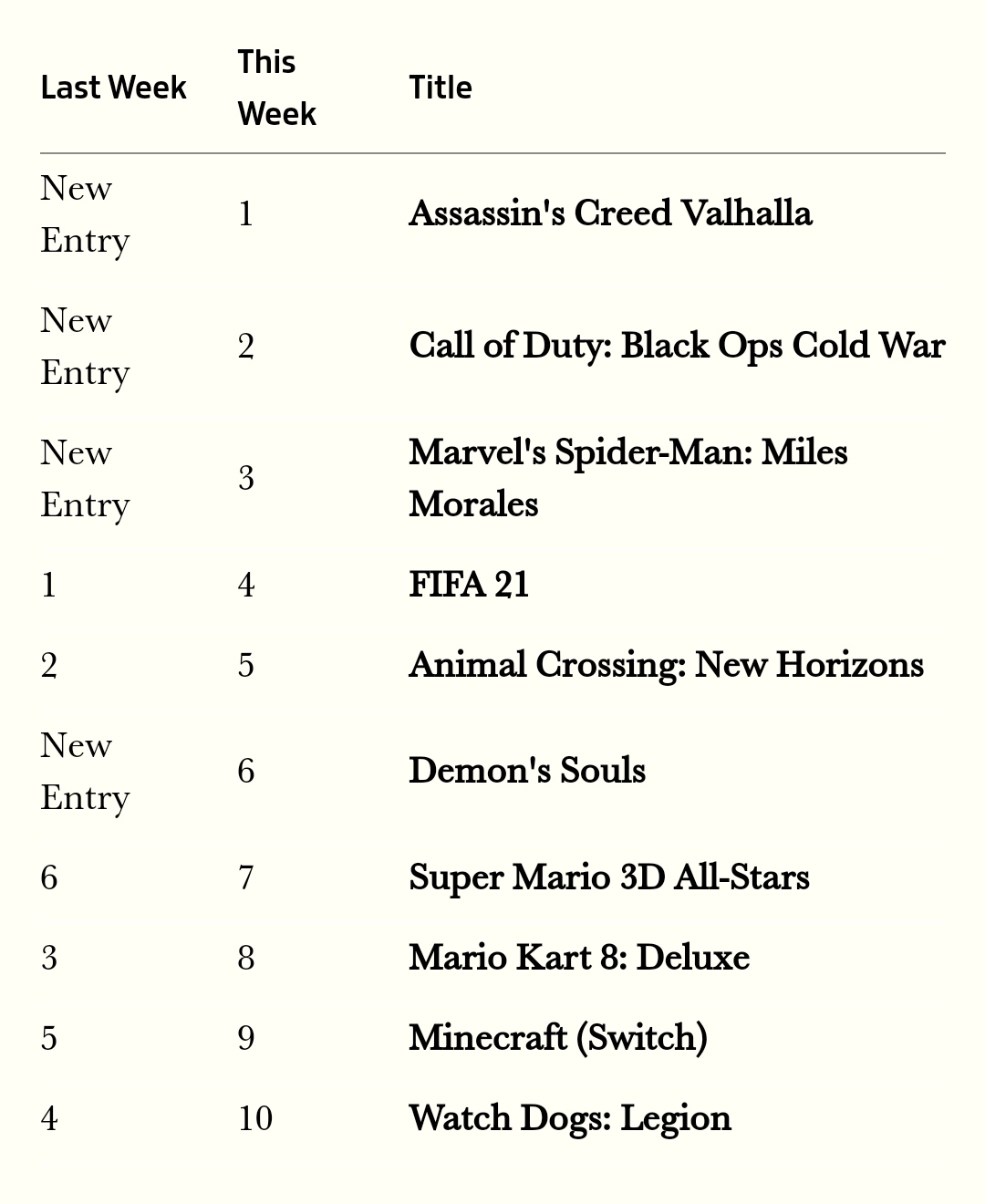 Assassin's Creed Valhalla is the best-selling UK boxed game in one of the biggest release weeks in video games history.

It did remarkably well, so well that it kept Call of Duty from making No.1 during its debut week for the first time in 13 years.
Click to expand...

In terms of physical sales, Assassin's Creed Valhalla had a massive week, with launch sales more than double that of its predecessor -- Assassin's Creed Odyssey. 42% of the game's sales came on PS4, and 18% came on PS5, despite the latter machine not coming out in the UK until next week. The rest of the sales (40%) came with the Xbox version. The game was marketed alongside the new games consoles released this week, the Xbox Series X and S. However, Ubisoft sold just one 'Xbox' SKU to cover all platforms -- including Xbox One -- which means it's impossible to know exactly which Xbox platform the game was bought for.
Click to expand...

The third best-selling game was the new Spider-Man: Miles Morales, the successor to 2018's hit Marvel's Spider-Man. Boxed sales of this new game are 56% lower than the original, although it's worth noting that Miles Morales is not billed as a full sequel to that game, but rather a shorter spin-off (and again, we will need to consider the impact of digital sales).

It is, however, billed as one of the big launch games for PlayStation 5, and 71% of its sales were for the new console (with 29% of sales coming on PS4). We'll get a better picture of its debut performance once the PS5 actually launches in the UK next week.
Click to expand...

Other PS5 games in the charts include Demon's Souls at No.6, Sackboy: A Big Adventure at No.13 and Godfall at No.16. Demon's Souls and Godfall are only on PS5, whereas Sackboy saw 89% of sales coming on the PS5 version, with the remainder on PS4. Again, this is all just boxed games data.
Click to expand...

Yakuza: Like A Dragon makes No.20, with 65% of unit sales coming on PS4 and 35% on 'Xbox'. Finally, Planet Coaster: Console Edition comes in at No.17. Remarkably, the game sold almost exactly the same number of copies on PS4, Xbox and PS5.
Click to expand...

It's a massive, massive week for UK game sales

So evil was defeated? Or just temporarily retreated?
Reactions: Kerotan

I find incredible that 17% and 18% of total sales came from a console that has been on the market less than a week.

Also interesting, the Series S|X version of Call of Duty only sold 9%, I wonder if that reflects the ratio of sold launch consoles.

how is COD not winning? Oh yeah it came out later
Reactions: Arkam

Azurro said:
I find incredible that 17% and 18% of total sales came from a console that has been on the market less than a week.

Also interesting, the Series S|X version of Call of Duty only sold 9%, I wonder if that reflects the ratio of sold launch consoles.
Click to expand...

The PS5 is not on this market at all yet. Unless I'm misunderstanding you.
D

Azurro said:
I find incredible that 17% and 18% of total sales came from a console that has been on the market less than a week.

Also interesting, the Series S|X version of Call of Duty only sold 9%, I wonder if that reflects the ratio of sold launch consoles.
Click to expand...

PS5 is not released yet in the UK. Currently people are in their homes during a Covid lockdown starring at unopened games waiting for a delivery next week.
Last edited: Nov 15, 2020

RoadHazard said:
The PS5 is not on this market at all yet. Unless I'm misunderstanding you.
Click to expand...

Oh damn, sorry, I thought it launched in the UK at the same time as the US and it was us here in Continental Europe waiting.

So it's basically people like me and my copy of Demon's Souls waiting for the console to play it. Even more interesting fact imo.

What a joke... obviously not a lot of ppl bought the PS4 games that released a week before the console.
Last edited: Nov 15, 2020

It'll come back next year for another 5 year Streak.
Reactions: Birdo

Ps5 games number three and six with no console to play them on.
Last edited: Nov 15, 2020
Reactions: MrS

AC getting No1 over COD is insane.

Woke Dogs boming hard it the country it's set in.

Yakuza at 20? That's rough, Sega taking on that MS money might have been a nice pay cheque but looks like it's killed the small momentum that the series was building in the West.

Ubisoft must be ecstatic. The first COD killer in so fucking long. With digital COD might still win but who knows.

The ratio in favour of playstation over xbox is a major victory in xboxs second strongest market. Looks like playstation will dominate it this gen. And don't forget xbox had the AC marketing deal. Didn't do much.
You must log in or register to reply here.