People with over 1000 games in your Steam library. How do you come to grips with the fact you'll never fully experience all those games?

I have to disagree with OP's framing of "completing 15 games" as some sort of arbitrary limit to how many games a person can consume/year.
By such a definition I never played a single arcade game in my life? Many games don't have endings or poorly defined ones and you can still sink 100's of hours into them. I can buy a game, play it for 2h and be perfectly content with the experience and with my purchase.


Elysion said:
It boggles my mind how people are able to play so many games. Over my whole life so far I’ve played maybe 150 games or so. How people find the time to play hundreds of games within a couple of years I’ll never know, especially today where some of the biggest games are ‘service games’ that you can play for months or years.

Then again, the amount of games I buy per year hasn’t really changed since my childhood. As a kid I got maybe five or six games each year, either as gifts for birthday/christmas or because I saved enough money to buy them myself. That number hasn’t really changed after I became an adult; I’ve never felt the need to buy more than a handful of games per year, each of which I usually play for weeks or months.
Click to expand...

Dude! I played more than 400 games on the C64, 1200+ range on SNES & a similar number for PS1. Countless quarters put into every new pinball and arcade I came across. How on earth can you only have 150 games lifetime? You kinda answer the question, so live a little. Install MAME and go on a fucking discovery quest!

i have 224 games in steam
and by my rough calculation i played 70 of them
i think i have a good chance
i dont buy much bundle stuff and i dont impulse buy everything tbh
too much bloat tho. from bundles... back when i used to buy them. not anymore

Leonidas said:
Lets face it, most people on this forum probably don't even complete 15 games in a year. I think one of the recent polls said we here are mostly in our 30s.

So if the average Gaffer lives another 60 years and beats 15 games per year in that time, there is zero chance to complete all those games.

Doesn't it suck knowing you'll never beat all the games in your account, that's not even counting the games that are still being added to your account. I'm trying to come to grips with this reality.
Click to expand...

A small majority of the games I have (roughly 20-30%) are games I've played and purchased on other consoles, the rest are gleaned through bundle websites. It's how I've found some really fun indie games I would have never picked up on my own. I may not complete the games but I'll at least play them.

One of my personal faves that I wouldn't have even known about without those bundles is Beat Hazard, fun little Asteroids like game that's rhythm based to your music and will burn the shit out of your retinas with the light show.

I’ve got an enormous back catalogue split over three different platforms, I’ll never play them all but that’s ok.

I’ve got a veritable smorgasbord to choose from, and I’ve supported the industry into the bargain.

It’s like asking me how I feel that I can’t watch everything on the various subscription services we have.

It really doesn’t cross my mind. I’ve played everything I’ve purchased. Maybe I haven’t completed it all, but I’ve played them. Played the vast majority of bundle games I’ve kept as well.

The only games I can’t say I play are the many freebies I’ve received from Prime gaming, GoG, and Epic.

Now that I have a Steam Deck, I’ll be playing even more of my library.

Why would you keep buying games if you’re not going to play them?

I'm a completionist so I tend to spend lots of time per game, specially when I decide to go for 100% achievements.
The Steam Deck should help me complete more games when I finally get one.
Last edited: Jun 30, 2022

Over 4,300 games on Steam and still can't figure out what to play sometimes. Thank god for Gamepass. 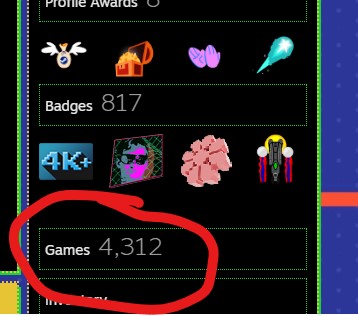 I don't need to play them all but when I feel like playing a specific type of game, I often have options. Much like a...library.
Last edited: Jun 30, 2022
H

It's not hard. I just don't care. There are more than enough games out there and only so much time. I'll play what I can

Having lots of choice is nice. You can just kind of play according to mood and whims until something grabs you to really sink your teeth into.

I play most games piecemeal, so it's not a problem at all.

There's always a lot of games that are just free giveaways.

And even if you bought the games and you only played for a while there is a big chance you already got your money's worth. A 5-10 € cinema ticket entertains you for about 1.5 - 2h, so it won't be too hard for a game to provide you more for less.

A friend of mine has over 4000 games because he has a press account and even him never felt overwhelmed or anything. He just play what he needs/want to and don't bother with the rest.
I have 500+ games (thanks to the good old days with Humble Bundle) and I just play what I want, when I want. Nothing to be stressed about

Gotta stop looking at most games as books or movies. They take WAY more time than any other entertainment medium to complete on the whole. We can't expect to relegate ourselves to only what we'll finish. There are far too many interesting games being made to at least not taste many even if we don't complete most.

I don't care if I'll never finish them all. When I go to start a new game, I'm spoiled for choice. It is nice to be able to pick just about any tag of whatever I'm in the mood to play and have multiple options.

I do not feel so bad anymore. I definitely have slowed down on game purchases. I used to buy a lot during sales then never played them. I now only wishlist games I would play and only buy from my wishlist. I have no plans to buy during the current summer sale since I am still playing games from the winter sale.

KyoZz said:
A friend of mine has over 4000 games because he has a press account and even him never felt overwhelmed or anything. He just play what he needs/want to and don't bother with the rest.
I have 500+ games (thanks to the good old days with Humble Bundle) and I just play what I want, when I want. Nothing to be stressed about

LOL, I just made that same statement in another post. With great power, sometimes great minds will think alike.
G

Swift_Star said:
Why would you keep buying games if you’re not going to play them?
Click to expand...

Because they are on massive sales. Before Steam redid their sales games could get so cheap in a flash sale you'd just buy and get to it later. It adds up after awhile and you can't keep up. Plus with the bundles from third party sites where you could get a bunch of good games for peanuts your library could quickly skyrocket.

Completing games is overrated. Almost none have an ending that makes it worth the extra effort.

At the moment I "only" have 136 games on Steam, and to be honest I don't think I'll ever get to all of them. There's multiple reasons for that:

And that's just on Steam, of course. That's not counting the 200 or so backlog games across several retro consoles.

I love having choices of what to play when I want to play it, so having a backlog doesn't bother me at all.
Last edited: Jun 30, 2022

I just created a list of favorite games, played games, games I want to play and things I'll never play. I have a bunch of games I'm not interested in playing anymore and a bunch of games I don't even know where they came from.

To be honest I just don't care anymore, PC games I own in my digital library are pretty much worthless to me with very few exceptions.
Last edited: Jun 30, 2022

Graciaus said:
Because they are on massive sales. Before Steam redid their sales games could get so cheap in a flash sale you'd just buy and get to it later. It adds up after awhile and you can't keep up. Plus with the bundles from third party sites where you could get a bunch of good games for peanuts your library could quickly skyrocket.
Click to expand...

I think I end up spending less money buying a game whenever I get the urge to play it.

I only have 500 games in my steam library.

I treat them as my own personal game pass.

I'll get to all of them eventually

As for me, i only have 65 steam games in my account
granted, i haven't even beaten like 3 of them so i'm not in much of a position to talk am i

Damn, some of you buy ridiculous amounts of games.

I only buy a handful of games on Steam, most of them older and when on sale. Have a big Steam backlog, but also have plenty of time left to play them as I've worked my way through most of my wishlist on there.
Last edited: Jul 1, 2022
You must log in or register to reply here.

How to NOT share your Steam Games
Social Drama Cringe

MightySquirrel replied
Aug 30, 2022
How much it’d cost to buy every game on Game Pass (Analysis on how much you save with gamepass)
Opinion Analysis 2 3