The new People Can Fly game, published by Square Enix, will receive its first video gameplay very soon.
(it's a single player TPS game, with RPG elements, and also an option for co-op)


In addition, there are those who have had the opportunity to play it for the first time, and the first impressions are very positive

I got to speak quickly with one of those who played it about a week ago. He confirmed that this is not a gaas game. (because it is not built with those elements, but as a simple TPS rpg)
And he also told me that you can safely play in single player for the whole plot of the game. (and optionally also in co-op) And that the main components of the gameplay are of excellent quality.
The previews from journalists should arrive within the next 2 days.

One of the Square Enix managers confirmed that Outriders is not a gaas game. 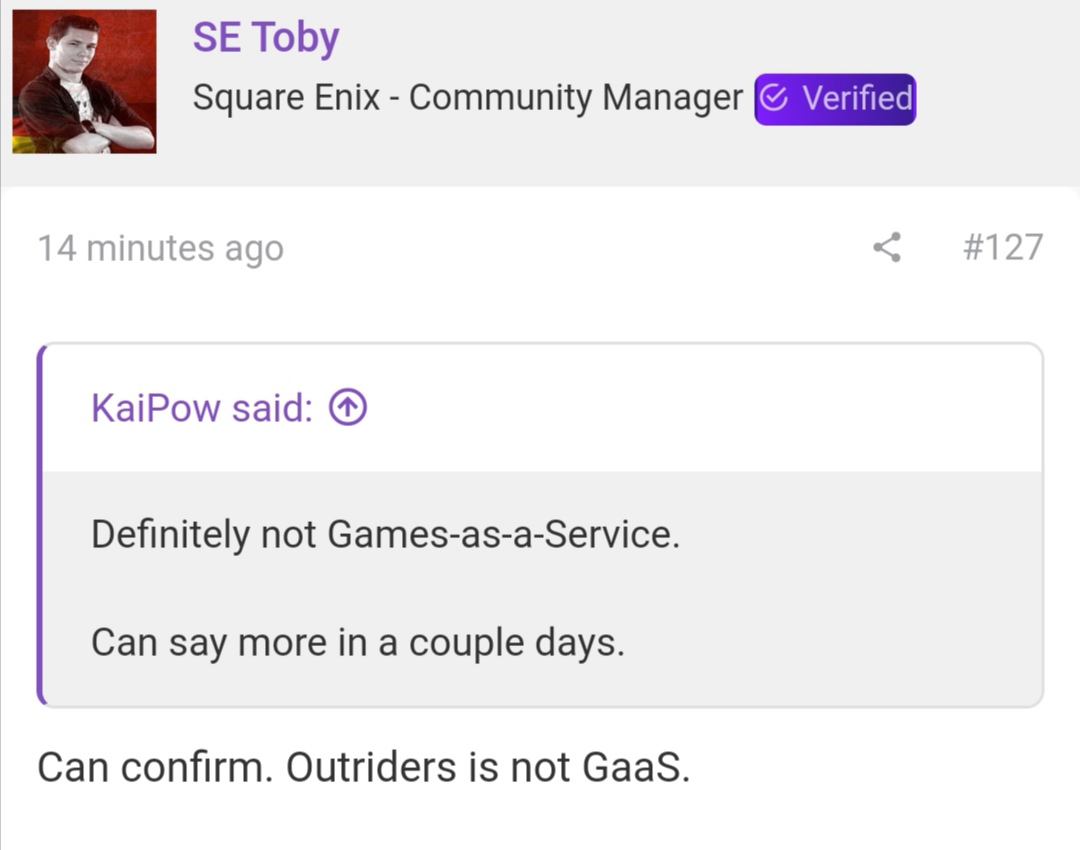 Nice! I saw a buddy of mine that's working on it post a picture of that splash, and I wondered what it was. Welp, here we go! Looking forward to hearing about it!

MiguelItUp said:
Nice! I saw a buddy of mine that's working on it post a picture of that splash, and I wondered what it was. Welp, here we go! Looking forward to hearing about it!
Click to expand...

I too am excited and very curious to see what this new People Can Fly project will be like.

Always thought division was held back by its realistic setting so a fantasy setting for a tps sounds nice at least.

Not GaaS yet there is a lot of focus on 3 people (players?) in that trailer.

Need to see some gameplay before even caring about the game.

A new people can fly game? I'm interested, but I need some gameplay.

It could be good, but I just have a feeling that it will be another generic looter shooter. That style of loot doesn't give me much hope.

And why keep 1 class secret still?

I watched only 2 min but the Gunplay looks meaty with good enemy reaction and gore, day one for me.

Game looks fun, but I gotta say, I'm tired of playing as ugly people in games. These characters look horrendous.

You know, I'm just going to go ahead and get hyped for this. I'm still hurting after the Anthem fiasco, which means the universe owes me a good looter-shooter.

Almost non of the Painkiller/Bulletstorm guys work on this.
This is the Judgement/Fortnite PcF.

Was Judgement bad? I never played it, couldn't stomach another Gears game.

There is a character editor, to create your own character to play with, and to evolve with magical effects also in the aspect with the skill branch.
I can't wait to use the Trickster class

Hype
You must log in or register to reply here.