Here are the unlock times 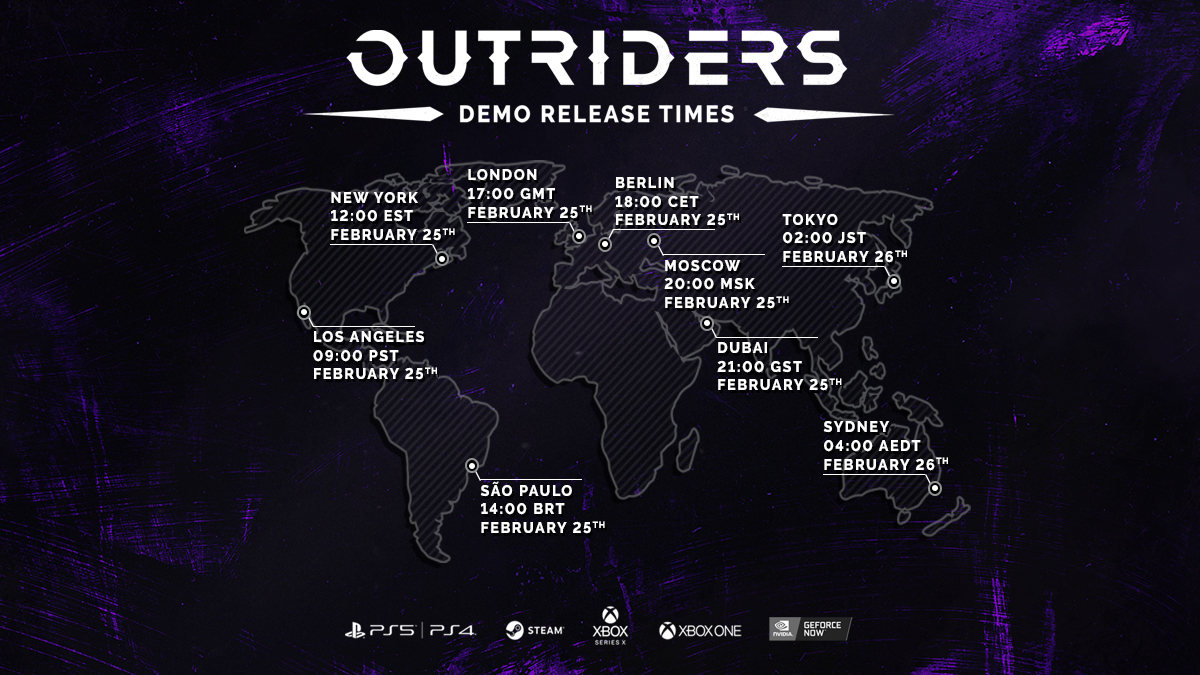 The Outriders demo launches on February 25. Here's everything you need to know.

YOU CAN TRY OUTRIDERS EARLY FOR FREE! Bulletstorm developer People Can Fly and publisher Square Enix are getting ready to launch this cooperative, sci-fi, third-person shooter game on April 1, 2021. As this is an unproven new franchise, Square Enix is giving fans the opportunity to experience a large chunk of the game for themselves before launch.

Ahead of the demo's release, the official Twitter account revealed lots of new details about the demo. Here's everything you'd want to know about the Outriders demo before trying it out later this week.

The Outriders demo will be available on every platform that the game is on, with one exception. PC, PS4, PS5, Xbox One, and Xbox Series X players all can try out the game at the aforementioned release time. The only platform that is being left in the dust is Google Stadia.

Square Enix and People Can Fly have also confirmed the demo's file size across PC and console. On PC, the file size is expected to be at least 24 GB. Console players, on the other hand, only need to allocate 22 GB of hard drive space for the demo. This is a fairly small file size, but it can't be pre-loaded.

WILL OUTRIDERS DEMO PROGRESS CARRY OVER TO THE FULL GAME?
While the Outriders demo install won't turn into the full game for players that decide to purchase the third-person shooter, some progress will carry over. The demo itself will include Outriders' prologue, first chapter, and sidequest.

All four of the game's classes will be available, and any of these weapons and resources players or progress they make on the character will carry over to the final game. Still, there are caps to how many resources players can collect, as well as a level cap of 7 and difficulty of World Tier 5.

Progress can be carried over as long as you're staying within the same platform ecosystem. For example, PS4 progress will transfer to the PS5 version of the game, but not to Xbox Series X. The demo does not contain any unique achievements.

Reactions: Kao The Kangaroo, Ailynn, Ezekiel_666x and 4 others 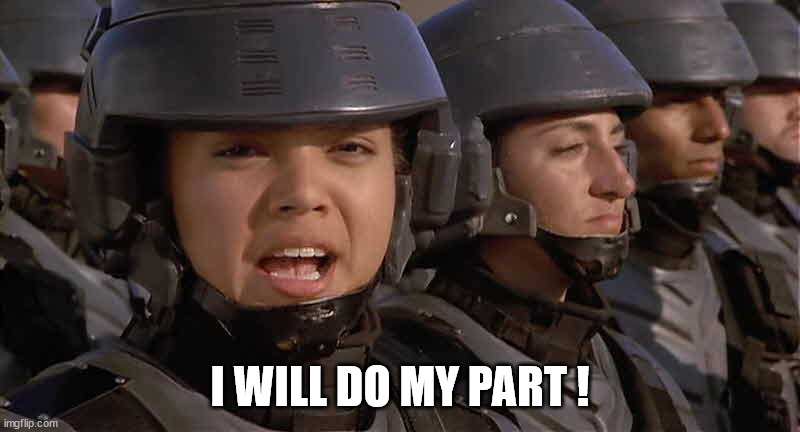 Reactions: Memorabilia, Night.Ninja, DavidGzz and 7 others

Can't wait to return home tonight to try this thing.

Is the ps5 version at least 60 frame?!
Reactions: Bladed Thesis and M1chl

Thanks for the reminder. I will try it out, I miss playing something like Destiny.

Oh boy, no reason to download the pc version then.
Reactions: Chris_Rivera

Well we see, how it's going to be running.
Reactions: GymWolf

Wish I could pre-load it already as I get off work late.

First world problems I know but yeah... I'm a bit excited for a new People Can Fly game.

I hope a giant spider eats them.
Reactions: Allnamestakenlol

I hope a giant spider eats them.
Click to expand...

Come on don't jokingly menace them when the treat is too credible ...They live on the starship troopers planet after all, have some compassion ...
Reactions: GymWolf and Lanrutcon

Game needs some polish, but it feels really good.

Man, the voice acting is way, way better than I expected!
Reactions: 8BiTw0LF and Kuranghi

I hope a giant spider eats them.
Click to expand...

If you have Xbox it's just a settings in System. Not sure if the game is worth it, but still.
D

Man, the voice acting is way, way better than I expected!
Click to expand...

I was surprised by the end of the story how diverse and unforced the npcs were. Really neatly done without having race and skin colour as their defining character.

Jakub is a great side character.

Devs just confirmed they got the resolution wrong for Series S and it will in fact run in upscaled 4K at 60fps, could potentially see the tools working

I heard this requires ps+ right?

Thanks for the thread

Really lookin forward to trying this. Gonna test each class as much as I can. just about 20 more minutes ,right?

Getting an error anytime I try to add the demo to my PS5 library.

Downloaded fine on Steam though, will keep trying on PSN while I boot up the PC version

I'll download and give it a try. Not expecting much, but maybe it will surprise me.

No comments on the demo yet?!

Allnamestakenlol said:
Must be REALLY good. Right?
Click to expand...

Went live 30 minutes ago. On PC I am stuck on the Signing In screen and on PSN I can't add the demo to my library. Pretty sure most people haven't had a chance to even play it yet.
Reactions: Allnamestakenlol
K

I did really love replaying Bulletstorm last year, hopefully this will feel as good as that did. The blue fire disintegration until only the skeleton is left is... fire. Worth a shot for free eh!
T

downloading now but won't play until tonight. Definitely looking forward to checking this out

For some reason only the PS5 version is showing up in the store for me?

Can’t wait to try this

Anybody know how you are supposed to select a story point on the main menu in order to start the game?
A

Only got to a bit of the gunplay before the servers (inevitably) shit the bed but it was as snappy as it looked in gameplay.

Performance is also REALLY good. Shame the cutscenes are locked 30.

Watching another buddy of mine stream this. He played through the story quests and is trying to go do the side quests, but he got booted, lmao.

It looks pretty cool, at least the shooting mechanics and combat. The skill trees, the loot, etc. Easily the best parts of the game. The characters, art, dialogue, etc. Is all pretty.... generic. Watchin him play it, it was pretty amusing how it felt like ALL the trope boxes were being checked off.

He was saying that the combat feels SO good that he's bummed that there's no PVP, which I could understand feeling that way.

Still not really sure where I sit on this, but I guess I'll keep watching from the sidelines.

ANDS said:
Only got to a bit of the gunplay before the servers (inevitably) shit the bed but it was as snappy as it looked in gameplay.

Performance is also REALLY good. Shame the cutscenes are locked 30.

had it downloaded, every time i tried to play it crashed back to home screen so i deleted it. reinstalled and then xbox kept asking me if i own this (it’s a demo you fucks!) deleted again and now it won’t even show up for download
Reactions: Phase

Playstation germany still sucks balls, so i have to download it on the SeriesX

I can't get past the authentication/sign in screen on either PS5 or PC.

Oh well, I figured this would happen. I'll keep trying

Game looks good, runs good and the intro was kinda badass. VA is also better than expected. This game will be good shit
Reactions: GymWolf and Tickle My Tendies

Man, sooo glad this is online only.

Servers got slammed as the demo became available for everyone. They're provisioning more right now but it'll take a bit for it to stabilize.
Reactions: TonyK

Was able to sign in on PS5 now. Here we go

(East Coast North America, for what it's worth)
Reactions: LegendOfKage and RiccochetJ

game looks very nice, only 5mins in of gameplay though.

wired_controllers said:
Will it do any good to remind everyone that there will probably be server issues tomorrow, especially right when the demo goes live? Or is there just no stopping that train?
Click to expand...

wired_controllers said:
I can't get past the authentication/sign in screen on either PS5 or PC.
Click to expand...


It is a shame this is so commonplace though.

Time and time again, all the azure and cloud and rollout maps and machine learning and AWS in the world and these clowns still can’t figure out how to rollout out an always online game. Our servers were hammered?

*woops I fucked up, it’s because of COVID right? Yes, COVID attacked the servers and we must safely distance ourselves from the servers via zoom calls and …
Last edited: Feb 25, 2021
Reactions: PharaoTutAnchAmun and Allnamestakenlol
W

midasmulligan said:
Time and time again, all the azure and cloud and rollout maps and machine learning and AWS in the world and these clowns still can’t figure out how to rollout out an always online game. Our servers were hammered?

That is why they release a demo. But they should have called it Beta Test.
You must log in or register to reply here.

Feb 18, 2021 started Tickle My Tendies
Feb 27, 2021
Areiz
2
Outriders Demo Runs at a Higher Resolution On XSX But Has Better Performance On PS5