I sometimes like talking about less known games here, even if the threads die as quickly as i make them. And the game i bring now is The Citadel.

The short is, this is a japanese developed retro FPS that takes inspiration from games like Doom, Marathon and Shadow Warrior.
However it does so while still bringing its own spins to the genre.


The thing that immediatly stood out for me was the ballistic system. Unlike many games of its kind, guns have recoil, bullet spread, bullet speed and even bullet drop. This makes gun fights a lot more satisfying, and even somewhat tactical to a degree. This also applies to your enemy's guns, which means no hit scan, allowing you a small window to get out of the way of the bullet. Not to mention when you kill an enemy, they blow up in these masses of gore with guts and metal flying everywhere while a ASMR-level fleshy sound plays, making kills feel very satisfying. 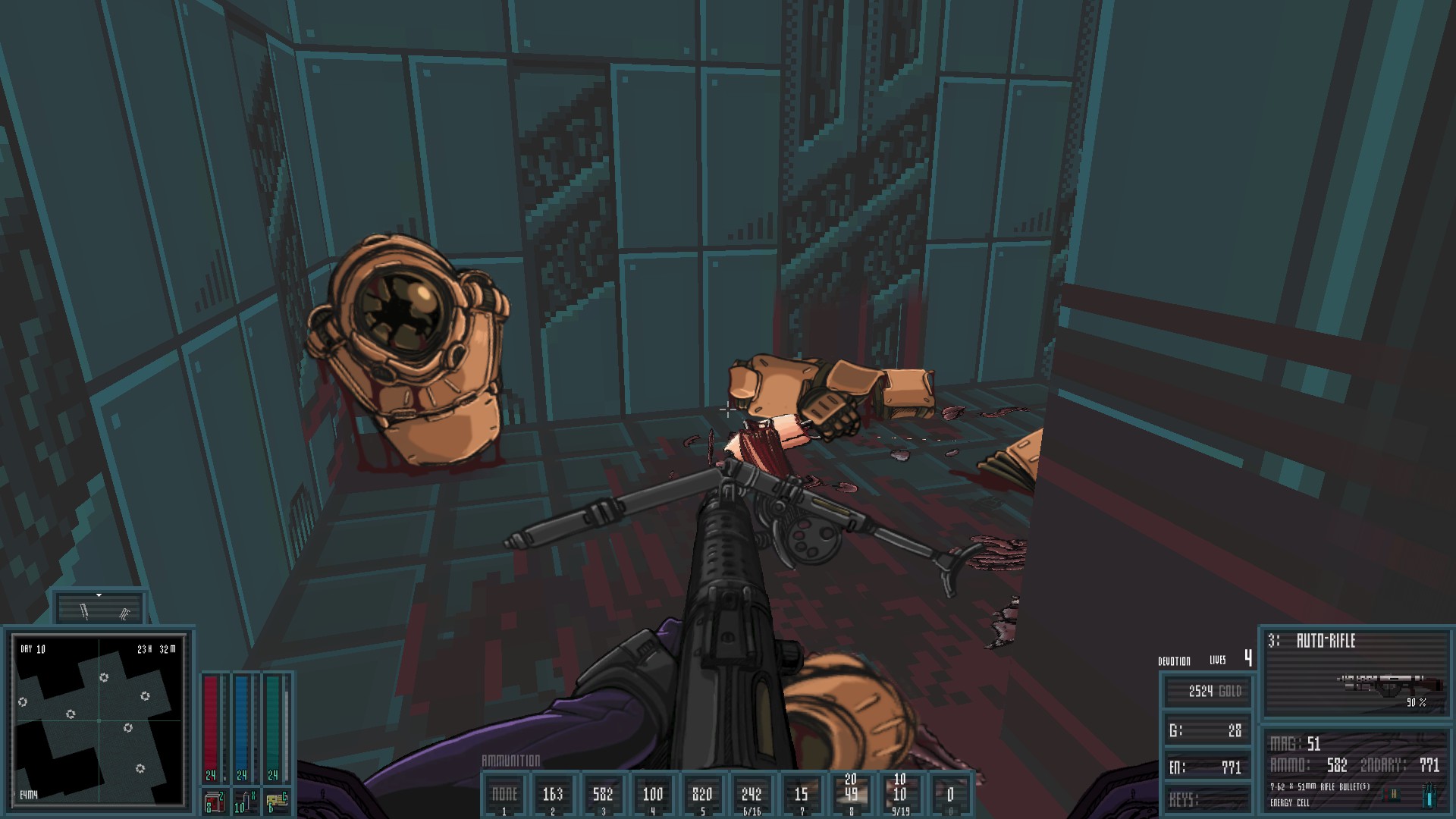 It also has some great particle effects considering its a game with 2D sprites and pixelated enviroments. 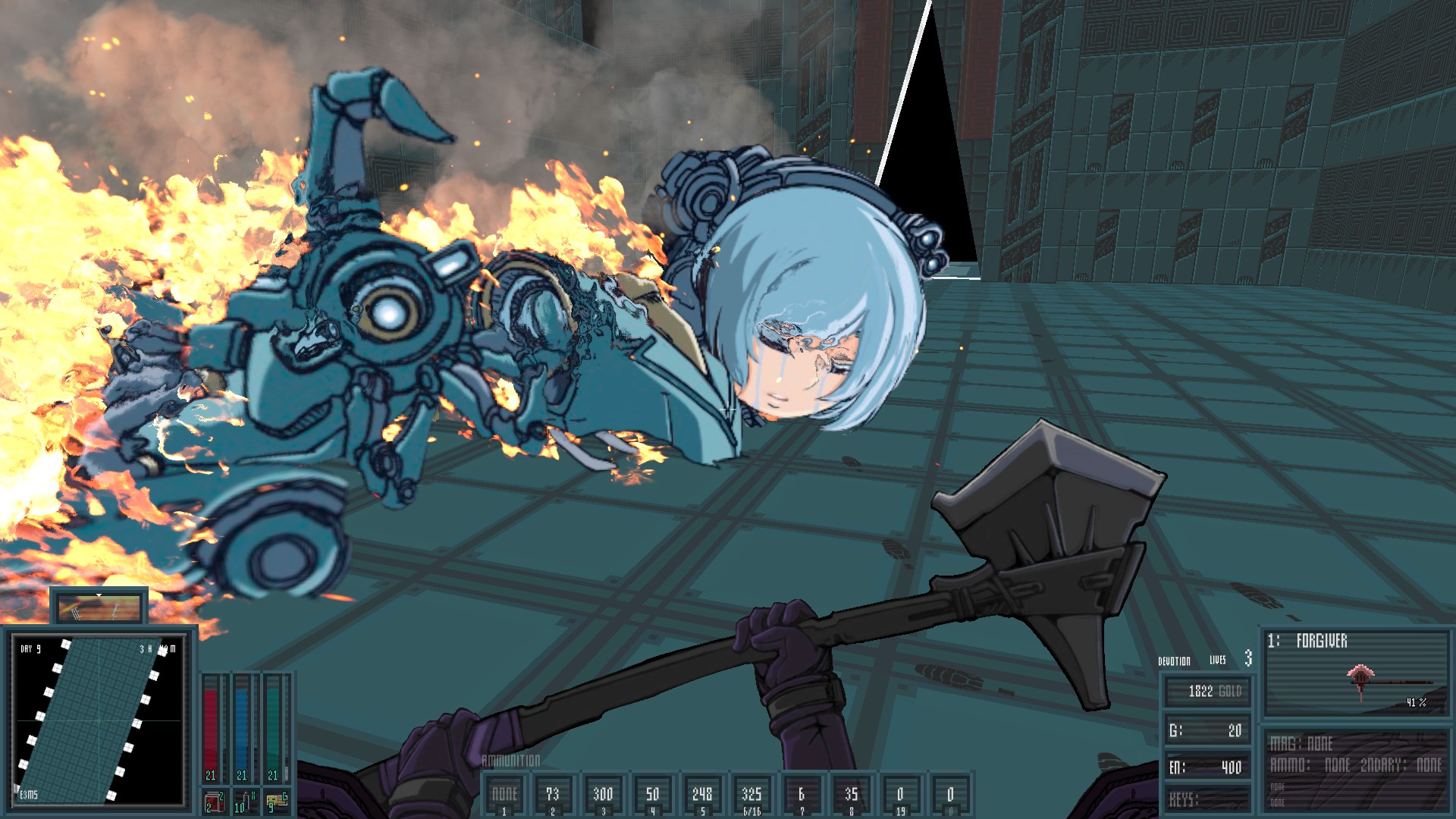 Aside from ballistics, the game goes all out with this kind of attention to detail. Guns have degradation, jamming (can be disabled on the menu), multiple types of attack (the initial pistol for example lets you shoot out your grenades), different ways to reload depending on the type of gun (you manually reload each shell with a shotgun for example, meaning the faster you press that R key the faster you can reload it).

Want to play without HUD? Press backspace to remove your helmet. See your own boobs body when you look down. The game even lets you unload your gun, with a dedicated hotkey and animation, i don't think i've ever seen this even in tactical shooters. It may seem purposeless at first but you do that to conserve ammo when switching your old gun for a less degraded one. There are so many of these small things is hard to list them all here. 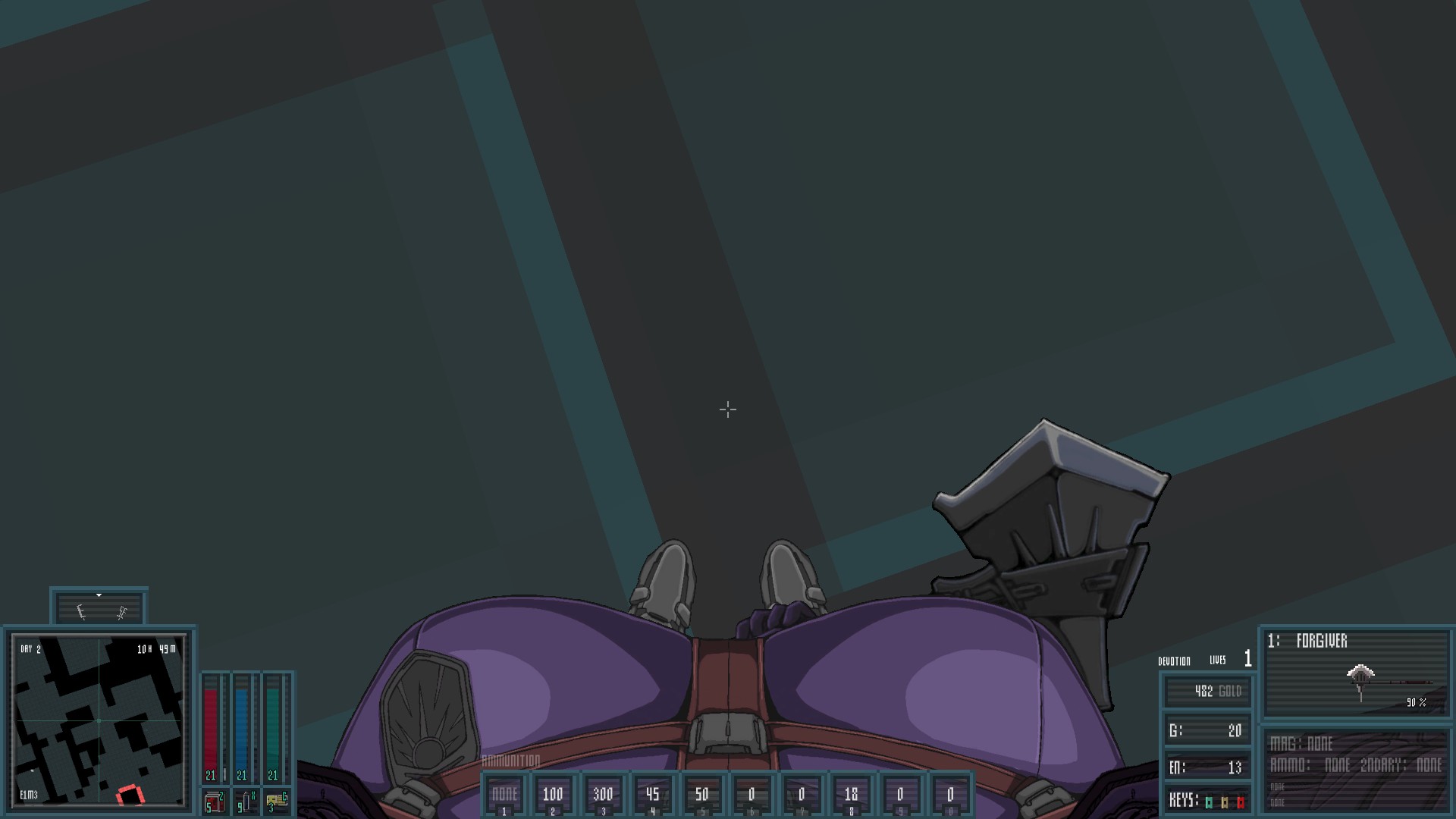 Nice axe you got under there

Onto the gameplay, as mentioned before, the gunplay is very good. The game is separated between 7 acts, each with a certain amount of levels (generally around 5), a boss fight at the end and sometimes an extra secret level. Its a somewhat short game and can be finished in under 10 hours, though a new game plus mode, higher difficulty options and the gameplay loop itself make it very replayable.

There are three bars you have to keep an eye on: health, stamina and hunger: Health is pretty straight forward. Stamina is depleted when you run, kick or jump and recharges on its own. Hunger slowly depletes over time and it determines the max level of the two other bars so remember to keep your waifu well fed. All these bars can be instantly recharged with bloodbags for health, oxygen for stamina and rations for hunger (on an interesting note, you can overdose on oxygen to make everything temporarily slowmotion, letting you see your enemies blowing up slowly in all of their glory). There is also armor represented by a more subtle bar besides health.

You can run, shoot/axe, jump, double jump, crouch, kick, lean and thrown grenades, and the game will require you to master all of these mechanics for combat and traversal. Levels tend to be fairly small, but also very open with lots of platforming/parkour elements, allowing you to literally go anywhere you want without any apparent invisible walls. There is good enemy variety, between humans, robots and vehicles, all with different variations of weapons, size and armor, often requiring different approaches. Theres also good gun variety, from pistols, machine guns and shotguns, to snipers, rocket launchers and flamethrowers.

Theres also a guy that sells you supplies and upgrades for your weapons. 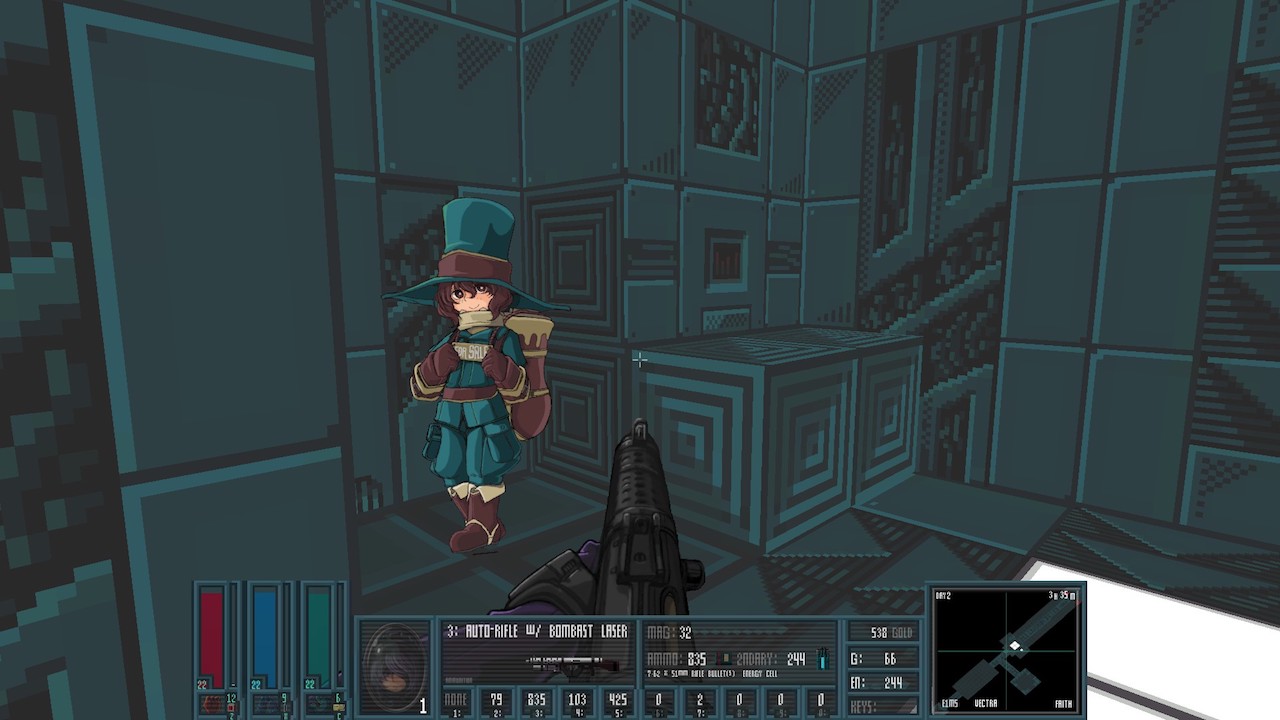 Talking about vehicles, there is an act that lets you control an armor suit you can find hidden within the levels and oh boy its is cool as hell. Forgeting shreding your enemies with massive machine guns or crushing them under your feet by jumping onto them mario-style, you can even level-out buildings. Those levels are also the biggest and more open ones in the game, clearly designed around the suit. 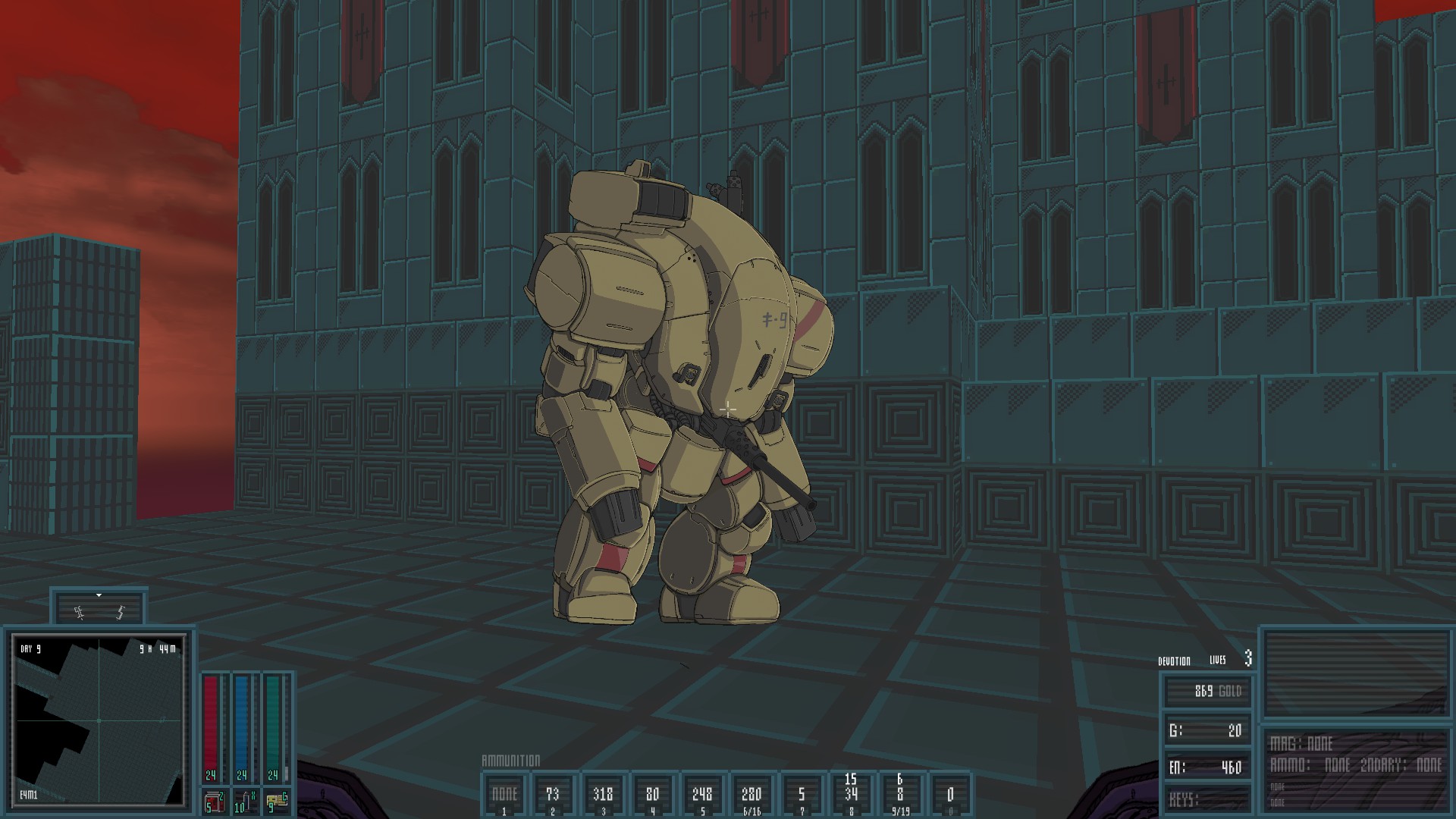 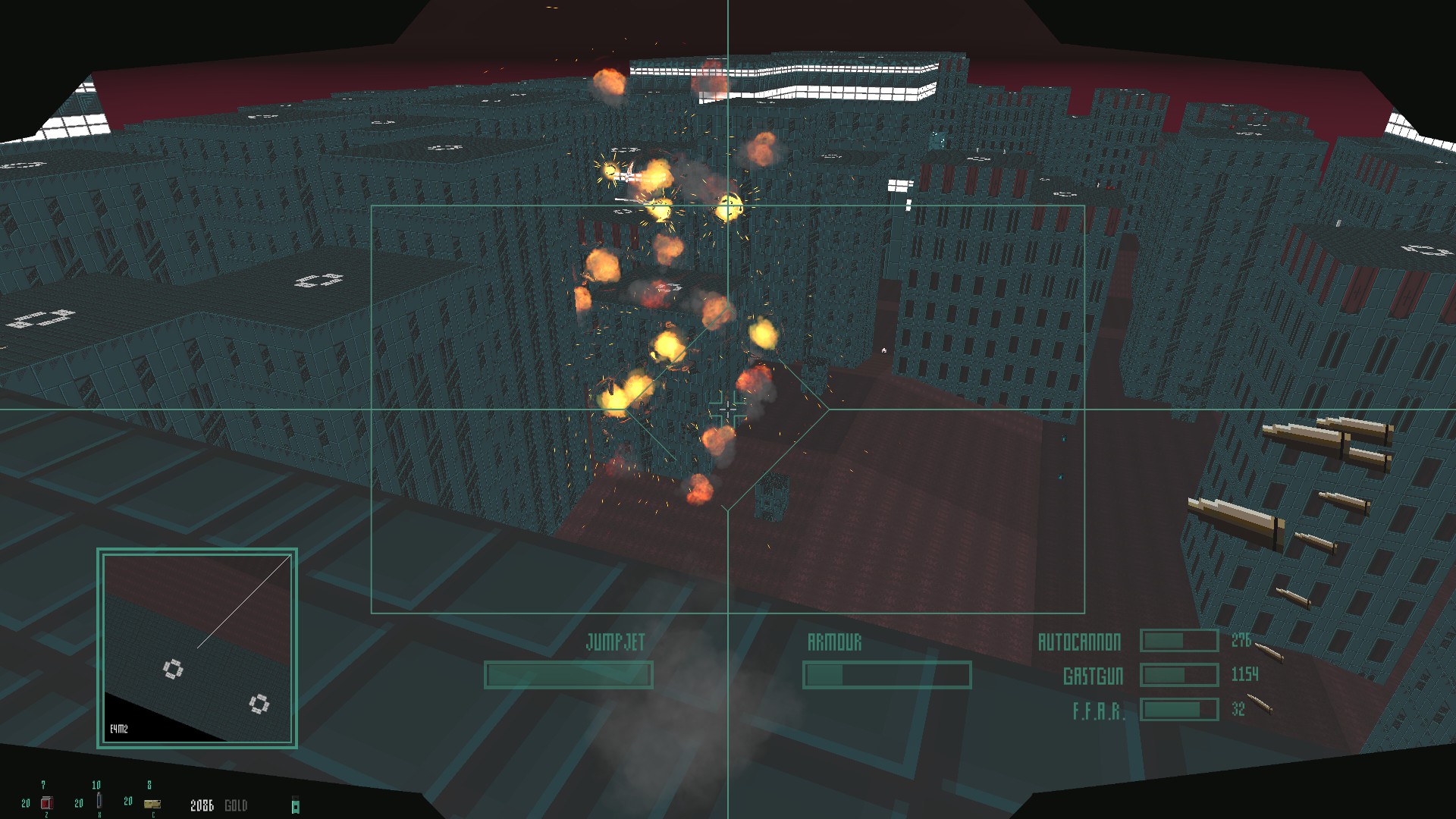 TL;DR: Game is fun as hell and has lots of intricacies and features, despite being mainly developed by one guy in his basement.
The bad: 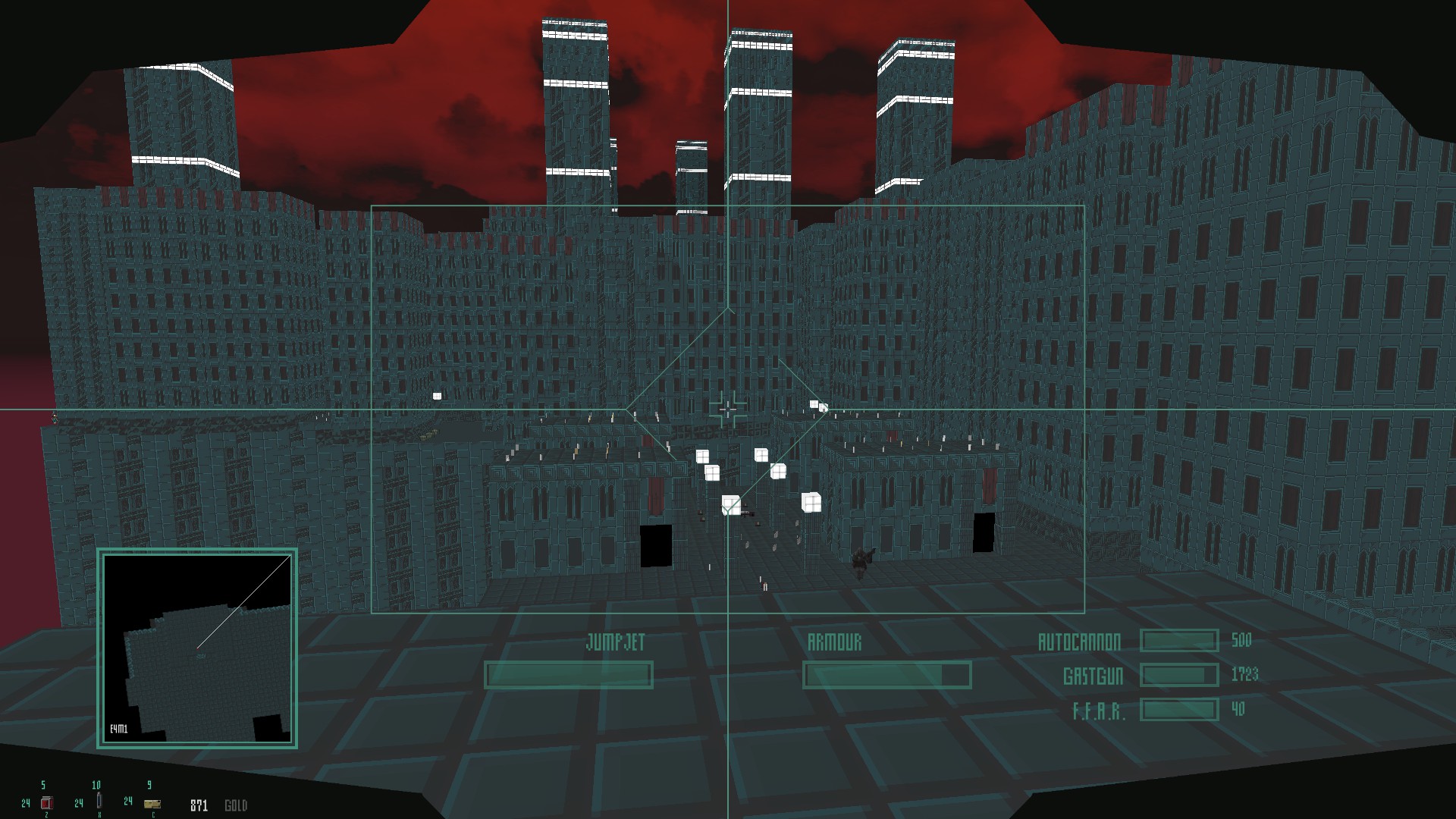 Red/black sky, squary gray walls, sometimes a lava floor. Now, to be fair, this can be either charming or uninspired depending on who you ask, but its still worth pointing out.

All the attention to detail and intricacies mentioned before? They can feel a bit bloated at times and might bother some people, personally i think the game would do better without a hunger meter. Some won't like the idea of gun degradation (though i didn't find it to be a issue since they take long to degrade and are easily replaceable), there are also people who get bothered by having to reload each shell in the shotgun.

Platforming also takes a while to get the hang of. I died more times to the void or the lava than i did to the enemies bullets.

Finally, the ending. Without spoiling anything, i'll just say the game ends in a rather anti-climatic note.
The ugly:


Poor performance. Bugs. Glitches. UI problems. Crashes. The game has it all.

First, the performance. This game is the kind that thoroughly punishes your CPU. Because of the particle effects and all the debris from both enemies and destructible elements on the scenario, some scenes can see your fps drastically dropping. You can mitigate that somewhat by reducing the amount of time it takes to debris to disappear, which is a shame since being able to look back on the desecrated battlefield you left during your rampage would've been pretty cool.

Crashes. During my 10 hours completing this, the game crashed a lot. So many times i lost count. Thankfully, they all, except one, only happened when loading a new level, meaning i never lost any progress because of them. Also, since the game is small, loading the game back again was pretty fast even on a HDD. Still, i can't let this go.

Lastly, the game does have its share UI problems and bugs. There are occasions when i'd bring up the weapon wheel only for the mouse cursor to not show up forcing me to use either the mouse wheel or the numbers o swap guns, which can be pretty unintuitive later in the game when you're carrying loads of weapons with you. A gun that wouldn't change the name of the firing mode i was currently at, meaning i'd only find out after firing a bullet to know. Sometimes i'd even somehow end up with slightly more supplies that the game normally allows.

Either way, its can be a rather buggy and unstable game, really showing this was mainly made by one guy.
Conclusion

Though technical issues may hold it back a bit, this is a very fun and addicting first person shooter that'll keep you entertained for some good 10-20 hours.

Also, we don't get anime FPSs very often, much less good ones, making this a gem on its own.

No lies detected; the last I can think of are the Crime Crackers games for the PS1, and those came out over 25 years ago!

Thanks for writting about the game

Guilty_AI , wish we had more threads like this one.

Also glad to read the game has good gunplay, I wouldn't expect that from a japanese FPS... Haven't played many (or any?) FPS done over there.

thicc_girls_are_teh_best said:
No lies detected; the last I can think of are the Crime Crackers games for the PS1, and those came out over 25 years ago!

Closest modern one i can think of that doesn't seem to suck is Bright Memory Infinite, though it feels more final-fantasy-ish than anime and its chinese rather than JP.

Theres also RE7 and Village i guess, though they aren't exactly anime either, nor a bonafide FPS a la Doom, Halo or Far Cry.
Last edited: Feb 20, 2022

Guilty_AI said:
Closest modern one i can think of that doesn't seem to suck is Bright Memory Infinite, though it feels more final-fantasy-ish than anime and its chinese rather than JP.

Theres also RE7 and Village i guess, though they aren't exactly anime either, nor a bonafide FPS a la Doom, Halo or Far Cry.
Click to expand...

Yeah there are very few modern games fitting the mold, so that makes ones like in the OP a lot more interesting out of that fact alone.

Castle WaifuStein 3D
You must log in or register to reply here.

Demon Front; a clone game as good as the source material! and other instances of that

Apocryphon replied
May 7, 2022
How were you introduced to gaming?
Social 2 3