The new firmware update for Sony’s next-gen console weighs in at roughly 900MB and appears to be a minor one. Release notes are almost nonexistent and only mentioned improved system performance. No further details about the contents of this new system update have been shared, although we’re pretty sure that it packs some under-the-hood changes.

The PlayStation 5 is available globally now. Sony released its next-gen console back in November of last year. Ever since the console has been quite hard to get by due to ongoing shortages and high demand. Last month, Sony introduced its big PS5 system update with M.2 SSD support, allowing users to expand the console's system storage. In addition, this major firmware update enabled 3D audio support for TV speakers alongside various other new additions and changes.

Back in July of this year, Sony announced that it had sold over 10 million PS5 consoles as of July 18, 2021, thereby becoming Sony's fastest-selling PlayStation console to date.

“I can’t express enough the deep gratitude we feel for our passionate community of PlayStation fans who have embraced PS5, and the world-class development and publishing partners who bring such incredible gaming experiences to our platforms,” said Jim Ryan, president and CEO of Sony Interactive Entertainment. “While PS5 has reached more households faster than any of our previous consoles, we still have a lot of work ahead of us as demand for PS5 continues to outstrip supply. I want gamers to know that while we continue to face unique challenges throughout the world that affect our industry and many others, improving inventory levels remains a top priority for SIE.”

It will now run all games at 8k 60fps 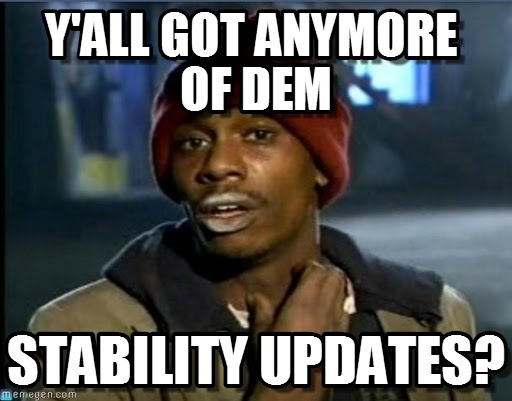 They fixed some security hole I guess.

Was surprised there even was an update when I turned it on today.

Dolby Vision support would be nice.

Released by Sony, are you sure?

I would love it if they released a system software update and the patch notes read: degrades system performance.

No that's for the unstable framerate

I hope this is the new stability update meme lol
F

When Sony updates come out you download it and thank them.

Edit: Can someone fix these old gif with a PS4 in it and this one with a PS5?
Click to expand...

Housh replied
Dec 26, 2022
Rumor: The Last of Us Part II may get a new version made especially for the PlayStation 5
Rumor Hardware Platform 2 3 4 5 6