​
Tschumi and the crew gonna be chit chatting over the bi-monthly sumo tournaments that go down across Japan, and any news stories that any of us may catch in the meantime.

New to sumo? It's awesome.

What's the cast at the moment?

At the Sekiwake rank beneath these two is Mitakeumi, a rikishi who is nailed to Sekiwake but seems to have lapses in 3 or 4 bouts every basho. Tschumi likes Mitakeumi, but he thinks Mitakeumi won't get to Yokozuna until he's 36, at which point he'll be injured for a year and retire (yes, that is more or less what happened with Kisenosato, a former Yokozuna who took his whole life to get to the top rank then instantly became an invalid)

Other rikishi get to Sekiwake, but they don't often stay there. I'm not sure if Meisei is going to, I can't remember if he got 8 wins in the recent basho, but yeah rest assured the rest of the top division is littered with fun young rikishi like Abi, Ura, Meisei, Wakatakage, Daieisho, Onosho, who could at any time get their shit together and join Takakeisho in the hunt for the basho. Abi is looking pretty likely, so long as he keeps fit.

Terunofuji just own his second basho in a row, his second at the top rank, with an undefeated record. This despite coming within inches of losing to both Abi and Takakeisho, and a few other less illustrious rivals too.

Tschumi doesn't think Terunofuji is the hottest shit to ever wear the twisted rope, and he thinks he's an ordinary person too, but it's taking rikishi a while to get how to unsettle the big man. Terunofuji's sumo can be generously described as 'safe', he does everything in his power to grip his mits around his opponents, keep both feet on the ground then labouriously pitch them over. He's huge, heavy, strong, the key to beating him is the age old David vs Goliath 'nimble is nice' method, but yes it's yet to be perfected. Abi got closest in the last basho, Takakeisho also basically won his bout only to lose it when he ran out of puff.

Tschumi will be revelling in the first losses Terunofuji suffers at his new rank.

https://www.youtube.com/channel/UCErxT8KRQi3JJEwMCDrcHBg
1 - Natto Sumo.
This is a very useful channel that puts up edited and texturally commented videos of each day's action in a pretty timely, consistent manner. Go here to get your holistic daily summary.


https://www.youtube.com/channel/UCIk5AQ47TYq8PQRoeM47LqQ
2 - Chris Sumo
This is a knowlegable guy named Peter (just kidding, I guess it's Chris) who puts up informative, newsy videos about sumo. He doesn't always seem to directly cover sumo tournaments, but he's good use nonetheless for knowing more about the wider goings on.


https://www.youtube.com/c/Sumostew
3 - Sumo Stew
Some nice girl named 'Ter' with a strange inability to pronounce the 'O' sound correctly (sometimes it's right, some times it's more like 'awh') and an annoying decision to appeal to ASMR fanatics, puts up fantastic videos on interesting sumo developments, history, and such quite regularly. You'll learn a lot from her videos.


https://www.youtube.com/c/JasonsinJapan
4 - Jason's All Sumo Channel
Unfourtunately this channel is going to 'retire' soon (EDIT: he's backtracked on this and will stay for another year), as the man who does it - his name's Phil (jk Jason) - is going back to the US in the new year some time. This is still a fantastic place to find archived footage of all the bashos stretching back a decade or so, all narrated by a friendly and informative dude. If you wanna know what Sumo was like when Hakuho was still doing it, or Harumafuji, this is the place to find those archived basho.

That's it for this OP for now, I might spruce it up/add in interesting stuff later.

I'd just like to make it clear that nobody need feel pressure to keep this thread bumped, let's just use it to chit chat when the basho come around/cool things happen.

Finally, just to get it rolling, I'm going to tag key participants from this thread from a few months ago just so we can get up and running.

When does the next Basho start?
Reactions: Tschumi

When does the next Basho start?
Click to expand...

The previous one ended like 2 days ago hehe (Terunofuji won with a 15-0 record the bastard haha) next one's in the new year!

I'm sorry for more tags, but I can't imaginate how often people look at Communities for long-dormant community threads so I'll just tag you all again

Turns out Jason is staying on for another year, so there's that!

Let's have a competition! 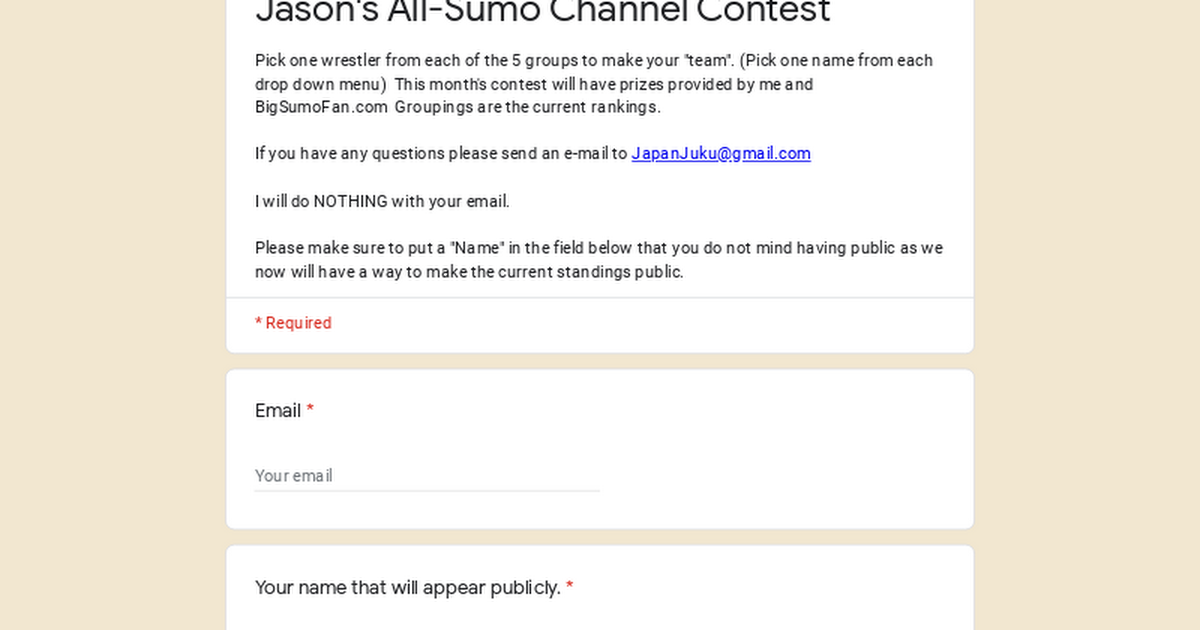 Pick one wrestler from each of the 5 groups to make your "team". (Pick one name from each drop down menu) This month's contest will have prizes provided by me and BigSumoFan.com Groupings are the current rankings. If you have any questions please send an e-mail to JapanJuku@gmail.com I will...

This is the link to Jason's rikishi-picking competition, let's fill it out and mention our picks and see how we all go!

HIS CONTEST IS A BIT WONKY THIS TIME AROUND. We also have to pick an east or west banzuke side, and predict their cumulative wins. So that's weird. Anyway let's gooooo!

This is a link to the official Banzuke. I dunno about you but it looks to me that East is stronger.

I dunno how many wins they might get, I guess it'll be high though so I've gone for 21.

My picks for the normal contest:
Sanyaku = Takakeisho (i just love this guy and don't trust Mitakeumi to rack up wins like him)
M1-M5 - Tamawashi (he's been as high as Sekiwake before, I think he can dominate a softer schedule)
M6-M9 - Abi (this is a no brainer to me, this guy's on his way to Ozeki in my opinion and he's only this low down the banzuke because he's coming back from suspension, Hoshoryu should be good, too)
M10-M13 - Ishiura (I kinda like him, he's not as effective as similarly-named Ura, but he seems to do a better job.
M14 - M18 (Tochinoshin, he's definately coming to the end of his career but I have a feeling he'll have another big performance at the bottom of the banzuke in him)

Well, the first day was pretty standard, Terunofuji again survived a spirited Daieisho, Takakeisho executed stunningly powerful pushing sumo, Mitakeumi made light of what could have been a tricky opponent in Ura, Abi still looks like he's playing with cheat codes because he's further down the banzuke then his talent requires, all of my competition picks won, I think.. Tamawashi beat Meisei who got to Sekiwake a few tournaments ago so I'm happy with my pick!


some selected bouts from Jason:

Day 2 - Ah shit, Takakeisho with a loss on the board in the first week! He lost his sense of location on the dohyo and couldn't brace himself against the rope - there's a portion of the boarder where the rope is offset a bit. His foot slipped and he sunk to the ground with a groan (on imagines)

That fucking sucks, hope it's his sole loss for the basho.

Everyone else I care about looked pretty strong, Abi still perfect, Mitakeumi still perfect, Tamawashi - another one of my picks, this guy is pretty interesting - also remaining unbeaten after two days.

Poor Ura seems to have picked up a horror injury after Shodai kinda snapped his knee over the edge of the dohyo. This might be a career-redirecting injury. Tragic.

Tamawashi is cool because he's been doing this for fucking 16 years! He debuted in the top division in 2006, holy shit. He's going for the record for consecutive bouts without missing one, he's at like 1500+ now. Jesus. They call him the Iron Man.
Last edited: Jan 11, 2022

I was lucky enough to catch sumo live on TV for day 3, URA just did something crazy, coming back from a savage head injury yesterday to beat Takakeishio in a replay (they faught twice in a row) he had to use a henka in the second bout to get the win but massive props to him for coming back and beating arguably the second best rikishi in the banzuke.

I've been mega busy with work arrghh - sad to hear Ura might retire, he's a very interesting fighter to watch.
Click to expand...

Takakeisho has done his Achilles too i think, which would fucking suck!

What a morbid basho

Takakeisho has done his Achilles too i think, which would fucking suck!

It's all the raised ring.
Reactions: Tschumi

Sad that Takakeisho is hurt. I wonder if he's too heavy for his frenetic style of sumo? Maybe he needs to lose some weight, take some pressure off his joints. I think i was wrong thinking it was his Achilles, just an ankle issue, so i hope this works out in the long run.

Mitakeumi giving me the shits, just saw him pick up his second loss live, hopefully he's on track for ozeki
Last edited: Yesterday at 8:38 AM

NVM! SECOND LOSS FOR TERUNOFUJI Mitakeumi still in it, even on 2 losses..
N

Terunofuji went down. What a joke
You must log in or register to reply here.