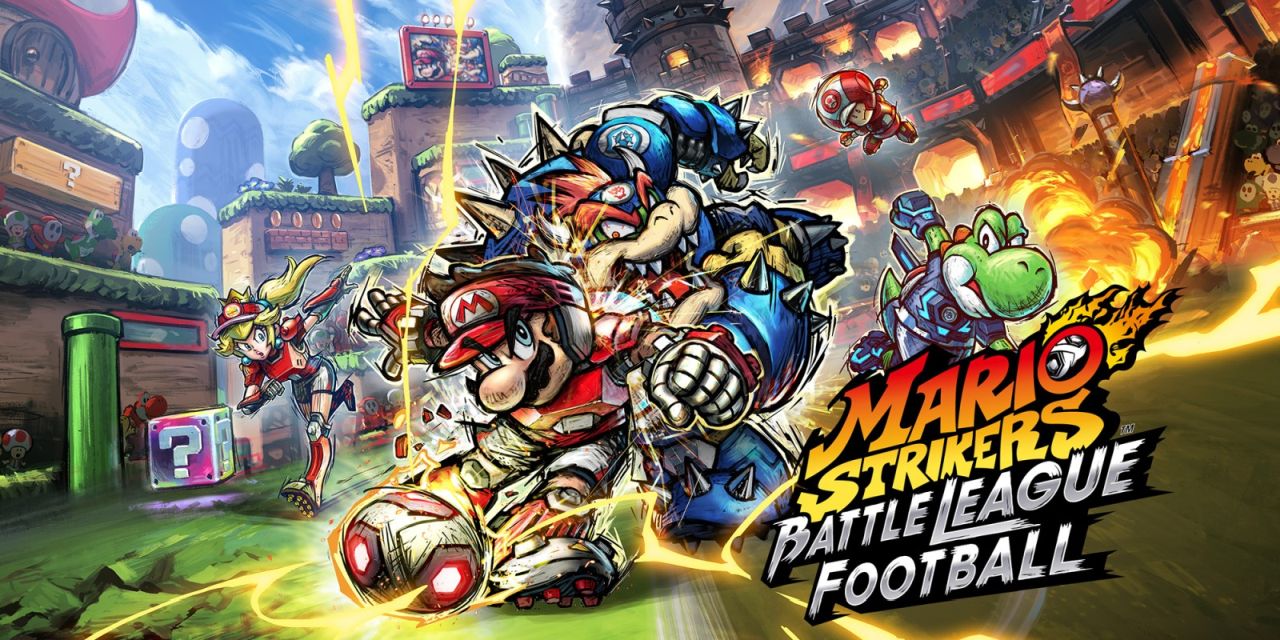 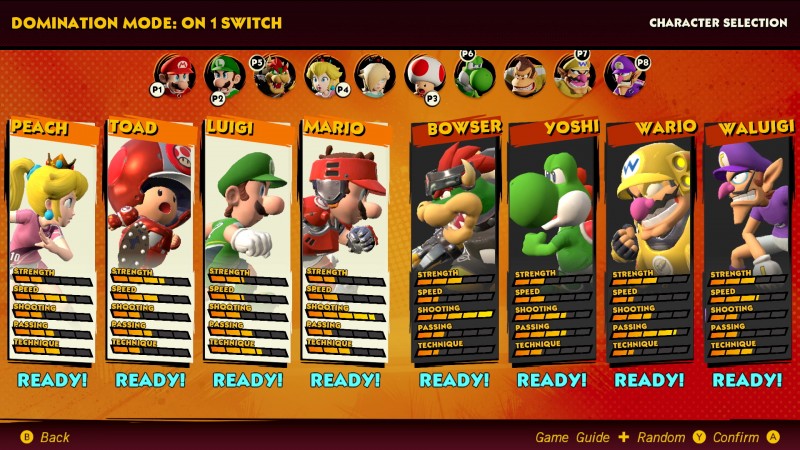 
Cup Battles
Returning from the first game, up to four players can be compete on a tournament bracket as a team in six cups, the last of which can only be unlocked once the other five are beaten. If a team loses their initial match, they are sent to the loser's bracket where they have to chance to survive and compete in the last match of the tournament, but losing again will cause them to be eliminated. Once all six cups are beaten, the Galactic Mode is unlocked, which is the same as the normal cups but harder and grant higher rewards. Each cup rewards the player more coins, with Galactic Cups holding a thousand of them each.

Quick Match
The player creates two teams with up to eight players along with picking an outfit and field of their choice to play in both offline and online matches. Configurations like the time, items, and Hyper Strikes are only available offline, whereas online players can either do matches with another person or compete by themselves.

Striker's Club
The newest mode included in the series, which has players creating or joining a club with up to 20 members to improve their division ranking across seasons. Clubs can be named and customized with many options including team outfits, gear, and field designs to take online against other clubs. Seasons happen every other week, where clubs can gain special currency for more field designs and go up in the rankings.

Just a quick OT because I noticed we didnt have one. People seem to be pretty down on the game.. I have been having fun with it.

The demo was surprisingly technical and had more gameplay systems than I expected. Nearly got it just to see Donkey Kong in some armor. I need more single player content though.

Punished Miku said:
The demo was surprisingly technical and had more gameplay systems than I expected. Nearly got it just to see Donkey Kong in some armor. I need more single player content though.
Click to expand...

I hope that they add more variety of armor in future DLC. It looks pretty limited to me right now but I havent really been playing around with different gear sets. Just been playing some online matches and inexplicably getting beat consistently by my wife.

Jooxed said:
I hope that they add more variety of armor in future DLC. It looks pretty limited to me right now but I havent really been playing around with different gear sets. Just been playing some online matches and inexplicably getting beat consistently by my wife.
Click to expand...

Yeah, that seems like another area that could be improved. The armor they have looks cool, but more would be nice. The game isn't bad, and play really well from what I saw, but they shipped it light on content for sure.

I'm sure the multiplayer is fun for those blessed with gaming friends and family, but there's not enough single player content to justify the price.

Jennings said:
I'm sure the multiplayer is fun for those blessed with gaming friends and family, but there's not enough single player content to justify the price.
Click to expand...

Yeah , absolutely no single player content besides the cups i guess. The online matches have been fun but I've been having more fun with my wife screaming at me in the same room

Jennings said:
I'm sure the multiplayer is fun for those blessed with gaming friends and family, but there's not enough single player content to justify the price.
Click to expand...

Was hoping they'd have taken a bit of a Mario Kart approach in that regard but no dice? That's a shame then.

Early thoughts from me are that it’s a fun game and technically quite deep as Mario sports games go.

Presentation is good for the character, but the pitches look a little bit bland to me right now, although you can customise your half off the pitch in terms of goal posts and environments and there’s decent variety here.

But the pitch itself that you spend most of your time looking at, is just a bland greenish play area. It probably needs to be that way so as not to distract from the gameplay, but a little more texturing would’ve been nice - as it is it looks like a flat piece of plastic.

The actual gameplay though has a number of interactions and offsets for various abilities and the nice thing is you can disable the ones you don’t like. There’s not a massive amount of moves - it’s not fifa complex - but each move has a counter and it’s all skill based with not too much randomness.

About the only complaint in terms of randomness would be the goal keepers who are all AI controlled for better or worse. Then again both sides have the same handicap.

The major one will be the hyper strikes - there’s a timing mini game and if 100% successful this scores 2 goals with an unskippable cinematic. I’m guessing people will like to disable that both because it’s unfair to give 2 goals and the scenes will get old.

However before dismissing the hyper strikes I would point out they take about 5 total elapsed seconds to trigger (with an attendant slow mo effect) and during that time the player is totally undefended.

So what this means is that if you mark your adversary effectively then they’ll never be able to take a hyper shot because you’ll tackle them out of it - and that is part of the strategy.

It’s like a fighting game - if the opponent can get their super out then you probably weren’t doing the right things before that point and conversely someone who tries to super at the wrong moment will be put at a disadvantage. The early AI is definitely exploitable for this but later getting out a super is a question of setting it up and waiting for the opportunity so it’s not as cheap as it first seems.

Online seems pretty solid and quite a few options for group play. So far I’ve just been playing randoms 1v1 but there are coop options.

I see Nintendo is going to do an organised league - that could be fun.

So yeah - I think this is a good game in the ninty style in that it’s about the actual gameplay itself and not a load of fluff around it and not a hint of mtx or anything else.

It is though $59.99 / £49.99 and that’s quite a lot - albeit without overt monetisation- for what isn’t a game with a lot of content and that is relying on the fun (multiplayer) gameplay to carry it. Let’s see how they do with free dlc to expand that.
A

OT missed the opportunity to call the thread Mariodona

I know nothing about Soccer other than Mario strikers so I googled Famous soccer players lol. This would have been much better.
A

Jooxed said:
I know nothing about Soccer
Click to expand...

I really expected 4v4 online given the focus on making an online club. Will wait until it gets a few more updates.

Coming off of playing a lot of Strikers Charged...I really don't like this game visually.
The feedback between ball passes and kicks just is not there. I wanted to like this game, but it just makes me wanna play Charged..

arvfab said:
Calling it soccer is the first sign that you are correct about knowing nothing

Its not a joke if its true. My wife is from Ecuador and gets mad anytime i say soccer haha
T

This game is very light on content for a solo player but the overall feel of the game is pretty damn good. I liked the slow motion better on the last game but I think it feels better to play than the last two.

I believe the dlc that was promised was going to be free and if so, that's a plus. But I can understand how the introduction price is a lil high for what's there right now. And please Nintendo make it so we can do 4v4 online cause odds are most people in a league will want to do it that way.

I just looked up the user score on Metacritic, and wow.

This might be one of the lowest rated Mario games on the switch.