Northeastmonk said:
I paid money for a license to use/play the PS Classics many years ago. There are only a handful of licenses I didn’t pay for on the store. I still play those games. The future of this whole “buying digital” it showings the cons of buying digital passed a certain period of time. I haven’t tested my games yet. I would imagine, if Sony wanted to be up there with Steam, they’d come up with something. Even Nintendo has issues with digital games with the 3DS/Wii U stores closing at some point.

Worst part is scrolling through the PSN Library when you want to download something. It isn’t super easy cause a lot of games aren’t listed in their store. My PS3 digital library is just under 900 items. I just wish things were easier for a consumer who didn’t pawn their PS3 or Vita away. Those who still care about their digital PlayStation libraries.
Click to expand...

Oh okay.
Yes, that's crazy but that's based on a grey legal area: You indefinitely own the licence you buy, which by definition are licence to unlimited access and use to a copy of x game, which means you actually (at least outside of dumbistan) can torrent a copy of it if the platform (or cartridge/cd in the case of physical copy) is not accessible for any reasons, because the conditionality of the access to the platform doesn't trump the purchase and ownership right of a licence.

But unfortunately, that hasn't stopped platforms like Nintendo or Sony to discontinue access to users library, since the grey area dictates that you can play what you own and installed, but download and access to the online library is conditioned by services which may be discontinued. Well the grey area is that this condition normally should only apply to companies that are going bankrupt or discontinuing the production of a physical product, while online services depend on servers that are still active. But since no court enforced it one way or the other, yeah that sucks.

Never trust Nintendo, and obviously don't trust Sony either, only on PC do you have a 15+ years old game library service that you can always access your game on, in fact a bunch of them. Fuck console maker for not competing with PCs AND emulators.

ArtHands said:
Well one of the numerous reasons my main library is on Steam

I find it weird that anyone would take comfort in this like it couldn't happen there, too.

ShirAhava said:
After the Wii VC I trust no one (other than Microsoft who have oddly enough done things correctly in this regard)
Click to expand...

Best thing Phil did since taking over, hands down. Only place I have a larger library of games to play is on the PC with Steam/Epic.

DragoonKain said:
This is why I support piracy for older games.
Click to expand...

I'm sure someone will come along and tell us that it's bad and we shouldn't do it because they need to protect their favorite billion dollar company. I've said it for years though. Emulation is the only way to protect the art. Otherwise it will dissapear forever.
Last edited: Apr 9, 2022
J

Northeastmonk said:
Does no one at PlayStation know how to fix this or what?

I haven’t tested my games yet. I have a lot of the PS1 classics on my PS3 and Vita memory cards. There’s only a handful that I don’t own.

I feel like PlayStation’s legacy options could be amazing, but they cherry pick what they focus on.
Click to expand...

Here’s an exercise in a waste of time, phone PlayStation support tell them about this, Sony’s support is some of the worst and dumbest in the industry, all you’ll end up with is time wasted and frustration.

I do not think so.

Which version is better for you, PS1 or Nintendo Switch?
Click to expand...

No joke. The PS1 version is the best one to play xD. Even PC and PS5 have FPS issues.

ArtHands said:
Well one of the numerous reasons my main library is on Steam

Owning the original PS1 game is superior to any digital platform.

The fuck? The PS1 version is far from perfect, and it won't last forever. It's got plenty of frame drops, load times were definitely there, resolution is crazy low, but gatdamn the sound quality was outstanding and still is I'll give you that.

No PS1 version of anything is perfect, and eventually your disc will succumb to disc rot, it's just how it is; degradation affects all matter, including us. It sucks that a lot of the modern remasters of these classics are lackluster and lazy, but that doesn't negate the need for them. A lot of the best PS1 games could benefit massively from quality ports with modern visuals and quality of life improvements, but many companies are just not going to spend the money necessary to produce these ports. It's a bummer, but it doesn't magically make the PS1 versions of these games flawless just because the modern versions are piss.

TheTony316 said:
Owning the original PS1 game is superior to any digital platform.
Click to expand...

To clarify, there are two editions on the Remaster: Original and Dreamers Edition. DF have verified that original version has the exact same 30fps framerate and the graphics that remain untouched from the original, meaning that version is a literal port. The Dreamers edition(the version you're speaking of), with touch ups and new models, is the edition that is having all of the issues.

jaysius said:
Here’s an exercise in a waste of time, phone PlayStation support tell them about this, Sony’s support is some of the worst and dumbest in the industry, all you’ll end up with is time wasted and frustration.
Click to expand...

The person on the other end has as much power in the company as a game advisor at GameStop. I’ve met some nice reps on their support end, but they don’t have anything besides a limited amount of tools at their disposal. I remember when I had to send in a PS4 due to the power going out and all their tech said was that their hardware division was separate from their support division. They couldn’t tell me anything about my issue.

ReBurn said:
I find it weird that anyone would take comfort in this like it couldn't happen there, too.
Click to expand...

Because it didn’t happen.

My copy of Chrono Cross I had already pre-installed is just fine. That’s where it sits until you install it. I installed it and checked the expiration. 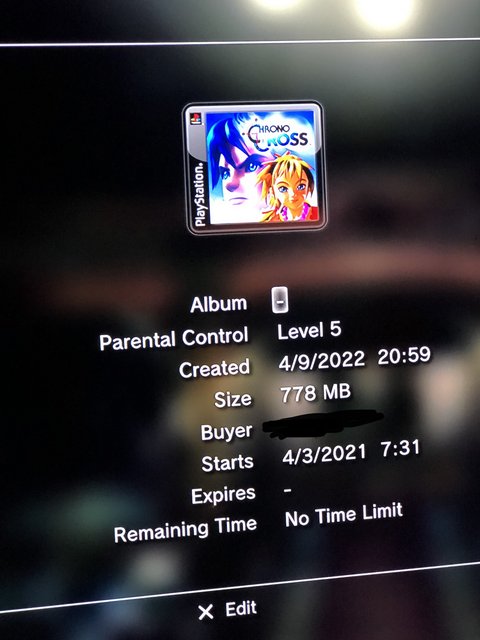 I checked my copy of Final Fantasy V and it expires this year for some reason? I’m thinking I can just renew the licenses. I’ve done that in the past. It’s weird and I don’t fully understand why I have to renew them when I go online with PSN and play the game every now and then. 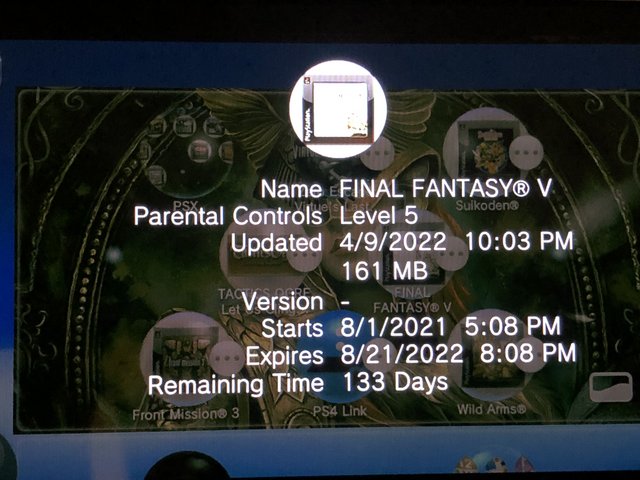 I checked Suikoden II and it has nothing under the expiration. All the games run and nothing changed after I launched the game. I haven’t tried to re-authenticate my licenses. This is setup rather stupid if I somehow fail to authenticate somewhere down the road and can’t. 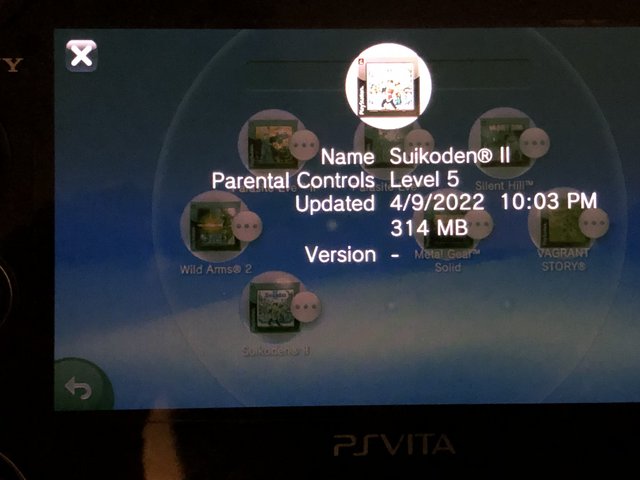 Edit: I just figured out why FFV might expire. iIRC correctly FFV was given out with Plus years ago.

That may be why. I can’t remember if I bought it or got it with Plus. My Plus expires in Aug and I just renew it every year. What does that mean if people are seeing something different? I have no idea.
Last edited: Apr 10, 2022

Captain Toad said:
Square is sucking human souls out of the planet to use as fuel?
Click to expand...

Hypothetically, if SE or some company ever wanted to intentionally do this (giving them the benefit of the doubt for now), it’s Sony’s job to say FUCK YOU, SE, fix this shit or have all your games de-listed for sale until you do

The remastered versions are better than playing it on original hardware when you play it in classic mode. It has the exact same performance as the PS1 version but it runs at a higher resolution with Anti Aliasing, better music quality and additional features.

Out of the 4 main platforms: Nintendo, Sony, Steam, Xbox,
Only Nintendo and Sony have proven that they can and will turn access to your digital shit off and there will be no way to download your purchase again.
Its already been a thing for awhile now on Wii (wiiware) and PS3 for DLC for games like Hot Shots Golf and Gran Turismo 5 and 6.

Around the time Sony announced turning off the PS3 store (which they reverted of course) I made sure to back my stuff up and have my PS3 hdd in order. But even then I had trouble with certain game patches and DLC. In contrast, I can still download everything I ever bought on Steam, 360, and XB1 dating back to 2003 - even games and minuscule stuff like demos that were removed from the store fronts like Outrun 2.

This suddenly expiring license thing is just another level of awful. People should be up in arms.
Basically as of today, if you havent downloaded your stuff - and disconnected your console from the internet - some of your PS3 digital library might be at risk.
Nintendo and Sony wont see another dime for digital from me.

My ability to be surprised by these things had expired a long time ago.

ReBurn said:
I find it weird that anyone would take comfort in this like it couldn't happen there, too.
Click to expand...

It has been addressed by Gabe Newell as well as Steam Support that if the company were to cease, there are measures in place to allow people to continue to be able to access their games.


It's not the most in-depth response, but it's miles ahead of anything Sony or Nintendo have put forth on the subject, which is essentially nothing.

And this is why I never buy digital. Ever. If I did, would I be buying or just renting the game?

If the future of videogames is all digital it'll be a future without me, I'm afraid.

Was there ever an update on this? I hope Sony actually addresses people losing access to products they paid for.

Omnipunctual Godot said:
Was there ever an update on this? I hope Sony actually addresses people losing access to products they paid for.
Click to expand...

Mine work. The only expiration I saw were PS1 Classics I got with Plus many years ago. Otherwise I just see a hyphen “-“ in the Expires category under each of the game. Which to me, means there’s no expiration on purchased games.

I have these on my Vita, need to go check.

Omnipunctual Godot said:
Was there ever an update on this? I hope Sony actually addresses people losing access to products they paid for.
Click to expand...

Yes, it was a glitch and it's been fixed.
You must log in or register to reply here.