The Nintendo Switch exclusive, which is also the first 3D Kirby game, is the biggest launch for the franchise in the UK ever. It sold 2.5 times the number of copies in its first week as the previous best, which was 2018's Kirby Star Allies (also on Nintendo Switch). It is Kirby's first UK No.1.

At No.2 is 2K Games' new Borderlands title: Tiny Tina's Wonderlands. Physical sales are low for the franchise, not even managing 10% of what Borderlands 3 achieved during launch in 2019. This is a Borderlands spin-off, and so was never expected to match the performance of the main series. This is also purely the physical charts data, and it's likely digital accounted for the majority of sales. Digital charts come in later in the week.

Just missing out on the Top Ten is Ghostwire Tokyo from Bethesda at No.11. It's another weak launch at boxed retail, but again digital data may change all that. The game's UK physical launch is 80% lower than The Evil Within 2, which was the developer's previous release.

Elsewhere, Elden Ring slips one place to No.3 after a 29% fall in sales week-on-week. Gran Turismo 4 drops from No.1 to No.4 after a 48% sales slide, while Pokémon Legends: Arceus drops to No.5 after a 9% sales dip.
Click to expand... 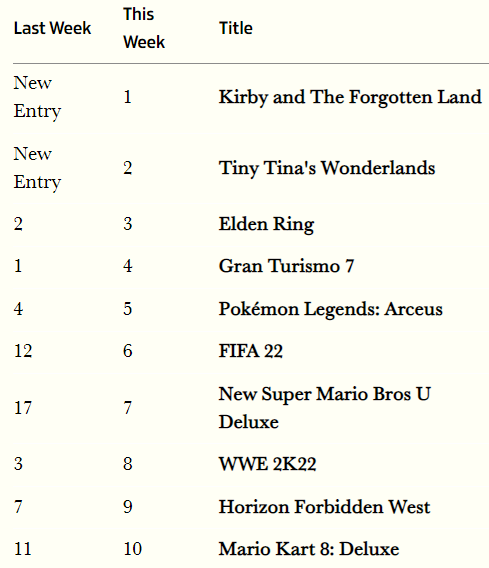 well deserved, this my first time ever playing Kirby game but really enjoying my time with it.

Kirby never been #1 in sales but it has a hungry fanbase,previous games have sold millions without trouble + now they been marketing to the Odyssey fans with this 3D entry i wonder how much they can sell. 10 million?

I can't believe New Super Mario Bros. U is still selling. It's not a bad game, but it's just the same game as the other "New" ones
Guess people are starving for a 2D Mario game

I’m also having tones of fun with Ghostwire, the game is not “horror” but some parts has really eerily atmosphere.

Nice to see, its a really good game. Very well made and just fun to play. Some games have that spark, that magic and this is one of them. My girl who usually sticks to oldschool action games(2D) and turn based 3D jrpgs really enjoys this too, and its great seeing her get more confident learning how to control a character in more action set pieces. Its a testament to good game design when the intro stage onwards is fun and hooks the player. Reminds me of when old games would try things just to surprise the player and we keep playing because of it. What else could there be, and there is a good amount of variety in moment to moment gameplay. Plus its visually very appealing. I still love that Nintendo cloud effect. I hope it continues to do well, they deserve the success.
R

if people say dumb things, lets quote/link to them so we can all laugh at them.

That's physical only. It's likely gonna be out of the Top 10 in total.

Bernd Lauert said:
That's physical only. It's likely gonna be out of the Top 10 in total.
Click to expand...

That’s a bit of a stretch isn’t it? Unless you believe GT7 doesn’t sell as well digitally. 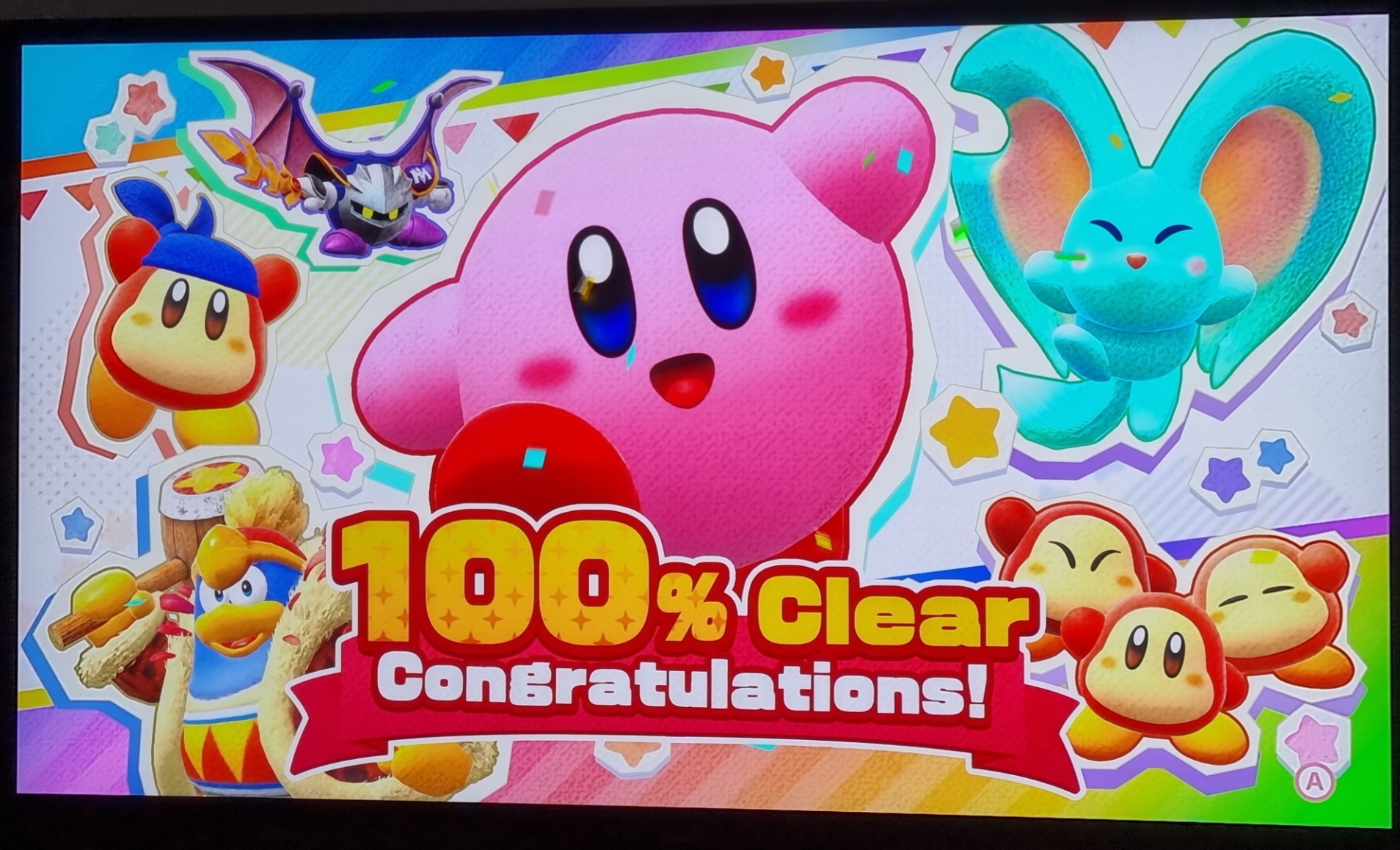 Just finished it after getting it Friday and finished today after work. Highest recommendation I can give for a game, incredibly fun to play and dousent overstay it's welcome.

Even on its... "Wild mode" its quite easy for 90% of your playthrough and then a bit like the more recent Mario games, it gives you an "ending" and then for the adults in the room keeps going with a decent challange.

Markio128 said:
That’s a bit of a stretch isn’t it? Unless you believe GT7 doesn’t sell as well digitally.
Click to expand...

We know it was number 6 digitally last week whilst being 1 physically but didn't have a combined chart.

Markio128 said:
That’s a bit of a stretch isn’t it? Unless you believe GT7 doesn’t sell as well digitally.
Click to expand...

Last week, GT7 was #1 physical but only #6 digital. I think it's gonna be close.

if people say dumb things, lets quote/link to them so we can all laugh at them.
Click to expand...

People were saying that due the metactic user score lol
Click to expand...

General consumers who are buying games don't really give a damn about metacritic scores especially on AAA games.

I don't think it's beyond the reason however it drops out of the top 10 digitally.
L

LOL, yeah I was a bit aggressive there. But massive drop though, so I was right, just went a bit too far. The shit storm from the game being unplayable had a huge impact on sales this week.
L

if people say dumb things, lets quote/link to them so we can all laugh at them.
Click to expand...

It was me. I knew the game being unplayable for over a day would have an impact. I thought it would have a bigger impact. Still a big impact with it dropping to 4. Elden Ring leap frogged it so the impact is clear.

Kirby is amazing and the sales are well deserved. I’m having a blast!
You must log in or register to reply here.