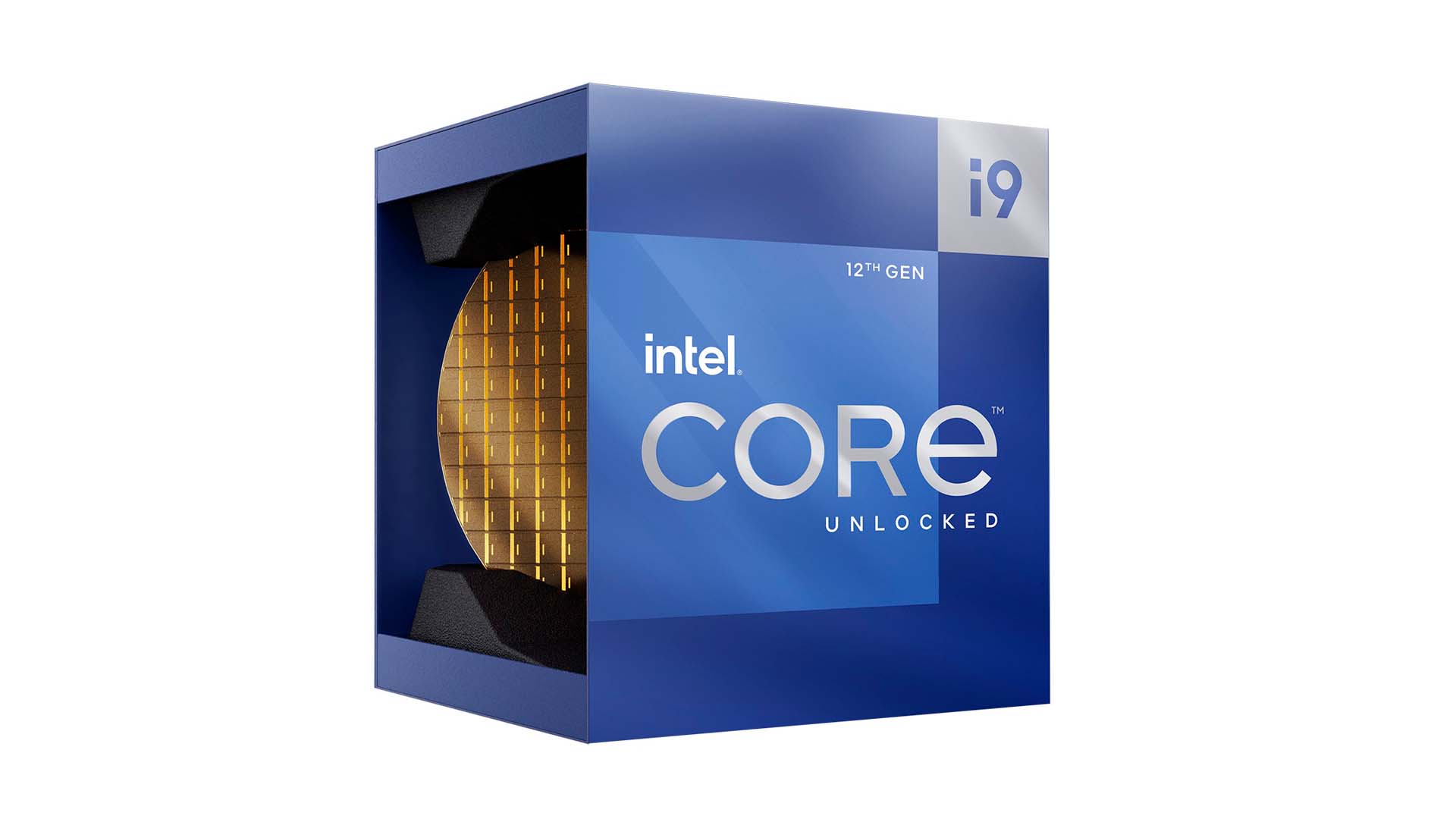 12th Gen Intel Core Family will include 60 processors and more than 500 designs, leading with enthusiast desktop.

The full 12th Gen Intel Core family will include 60 processors, set to power more than 500 designs from a broad set of partners. As detailed during Intel Architecture Day 2021, the new performance hybrid architecture, the first built on Intel 7 process, delivers scalable performance from 9 to 125 watts to enable every PC segment from ultra-thin-and-light laptops to enthusiast desktops and out to the edge. 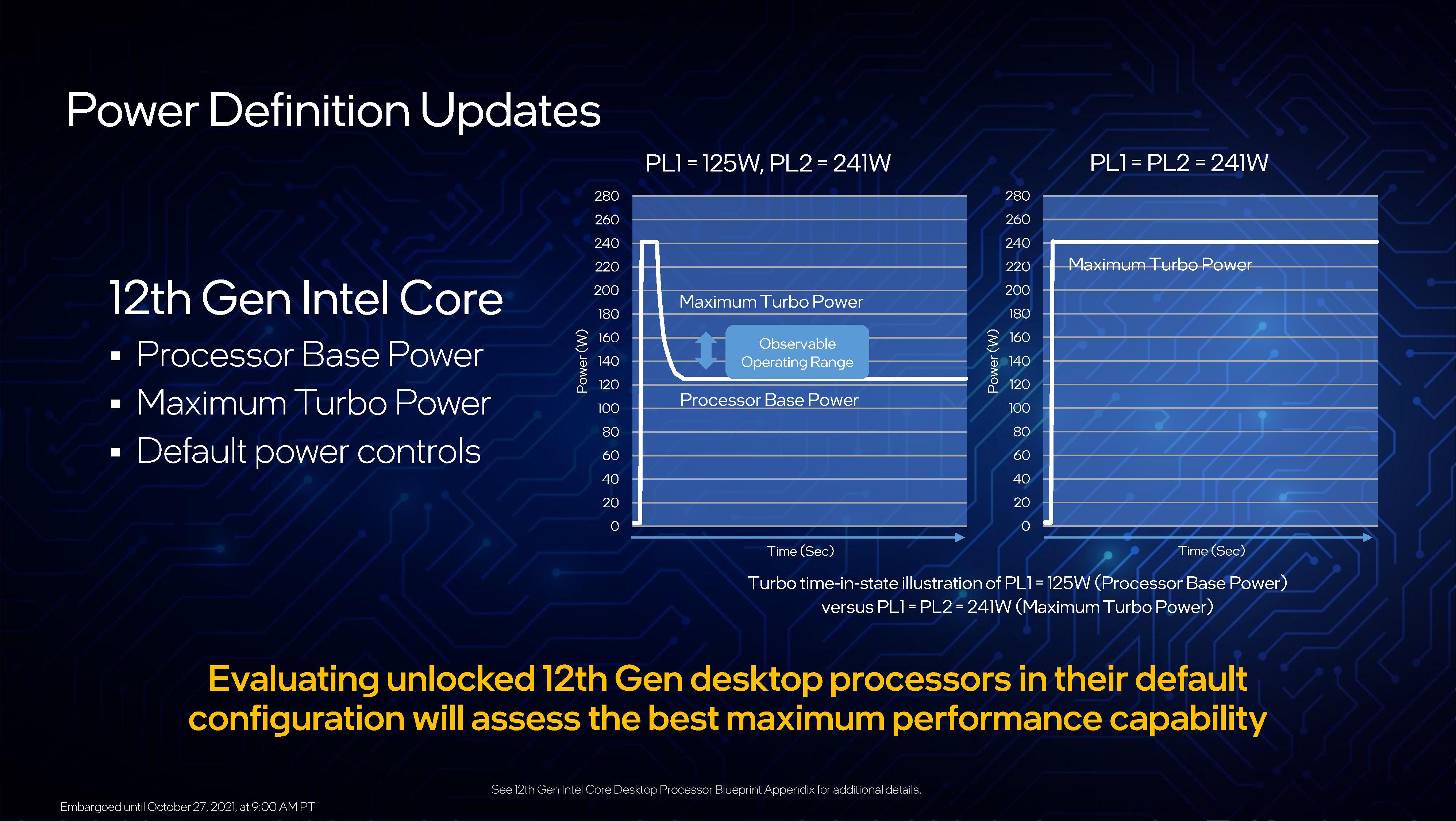 12th Gen Intel Core desktop processors empower people with the performance and industry-leading features for exceptional experiences across gaming, content, and play for today and tomorrow. 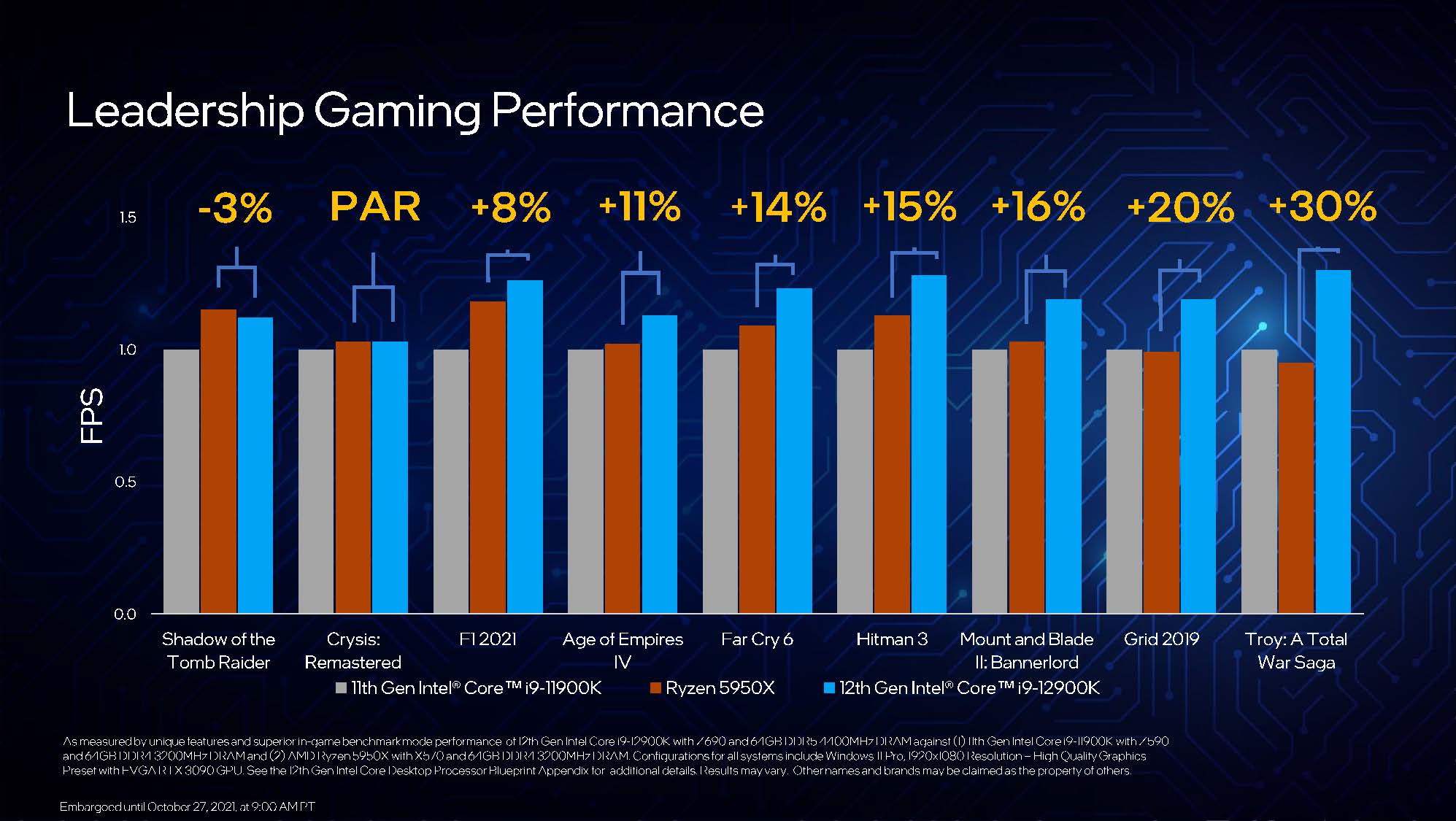 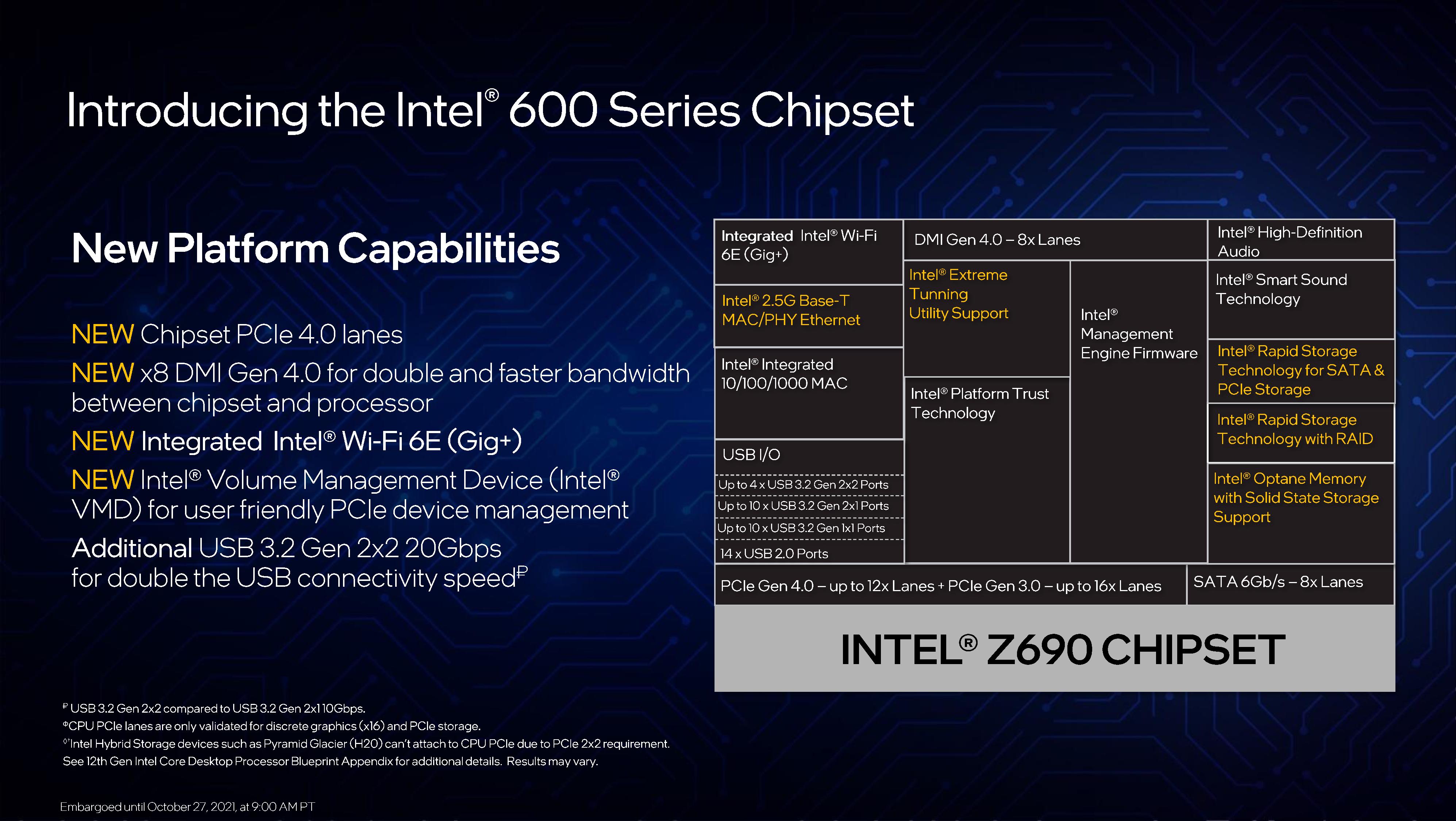 Alongside the 12th Gen Intel Core desktop processors, Intel is launching the new Intel 600 Series Chipset with advanced features for increased reliability and performance. New PCIe Gen 4.0 lanes make for 28 total lanes off the chipset, integrated USB 3.2 Gen 2×2 provides up to double the bandwidth, DMI Gen 4.0 increases the chipset to CPU throughput for fast access to peripheral devices and networking. 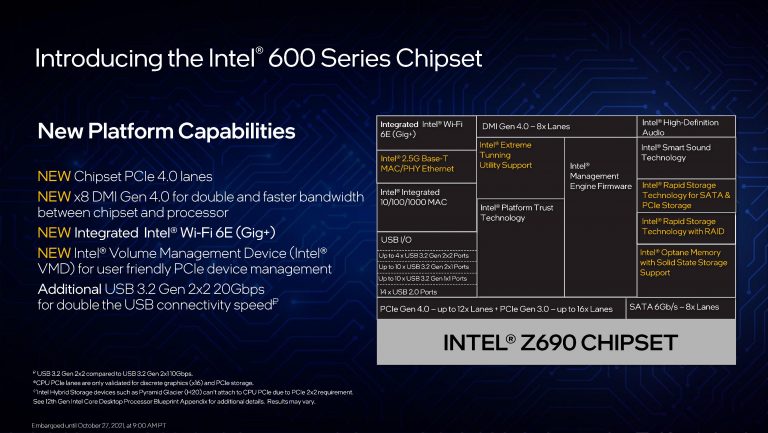 For the first time, Intel is bringing Intel® Volume Management Device (VMD) to PC chipsets to simplify storage control by allowing direct control and management of NVMe-based SSDs from the PCIe bus without additional RAID controllers or other hardware adaptors.

Unlocked 12th Gen Intel Core desktop processors are available now for pre-order from participating OEMs, channel partners, and retailers. Broad availability will start Nov. 4 with more than 140 customers in more than 30 countries expected to add the new processors to their lineups by the end of the year. Pricing starts at $264 to $589 for the unlocked desktop processors.

Intel expects to ship hundreds of thousands of 12th Gen Intel Core desktop “K” processors by end of year and more than 2 million by the end of March 2022. To enable the expanded offerings for desktop, mobile and commercial segments expected in early 2022, Intel is also shipping 28 of the processor SKUs in the 12th Gen Intel Core processor family to OEM partners.

Curious to see how this big little architecture will work on desktops with Windows. In all honesty, I don't see why they've gone down this path in the first place, maybe their main focus was mobile CPUs and this design tricked down to desktop CPUs as well?

I believe Intel 7 is their name for their latest 14nm etching machines.
A

As tempting as this is I'm going to wait to see what AMD has to offer.

I am still rocking DDR3 to give you a hint how old my pc is.

It's tempting to upgrade but the most intense thing I use my PC for is gaming and my overclocked 10700k still runs great for me. I'll be interested to see if having the e-cores makes any difference at all for gaming, how the 12900k performs vs my current chip, overclocking headroom, and thermals + power draw.

Tarin02543 said:
I believe Intel 7 is their name for their latest 14nm etching machines.
Click to expand...

I know iGPUs aren't a point with these chips but I'm surprised they aren't using Xe Iris graphics. UHD 770 is ouch.

But again, I understand the thought process, these aren't laptop chips so why afford the silicon for better iGPU when most will rock their own dGPUs anyway?

are in a big trouble

Just heads up these results were done on Windows 11 before the AMD issue was patched which intel openly mentioned.

That just goes to show how far behind AMD was in gaming. Took them till Zen3 (less than a year ago) to match Intel 14nm gaming performance.
Last edited: Oct 28, 2021
C

Dell also seems to have jacked up the price of 3000 series gpu’s quite a bit.

thicc_girls_are_teh_best said:
I know iGPUs aren't a point with these chips but I'm surprised they aren't using Xe Iris graphics. UHD 770 is ouch.

But again, I understand the thought process, these aren't laptop chips so why afford the silicon for better iGPU when most will rock their own dGPUs anyway?
Click to expand...

I hadn't noticed that - thought they'd be bringing the latest and greatest. ARK says a slight bump with 770 to max graphics frequency on it versus the 11900k with 750.
Prioritising gracemont cores over a better iGPU is probably a fair choice for them but I also see the bottom of the market clamouring for something a bit better while we're lacking discrete GPUs in this part of the market.
You must log in or register to reply here.