Forget VAR, the real scandal rocking the beautiful game is on the virtual pitch

If you've been anywhere in the same postcode as a FIFA title for the last several years then you'll be aware of the game's Panini sticker-come cosmic ordering simulator; Ultimate Team. Since its inception, the mode has slowly eclipsed all others in the yearly football franchise, which is appropriate because with its aggressive microtransactions and addictive gameplay it can feel like a black hole from which no light can escape.

The Weekend League, FIFA's weekly series of 30 games, pits the highest level players against each other to determine which in-game rewards those players receive. These rewards, which are determined by a player's win-loss record, not the quality of opponent faced, range from in-game currency and item packs to special FUT Champions versions of cards. For the best players, they can earn prizes that were they to be purchased with in-game currency, would cost hundreds of pounds. For the pros, the Weekend League is also a route to qualification for the FIFA eWorld Cup. As you can imagine, the competition each weekend is fierce.

During the third Weekend League of the season, a prolific content creator's freak loss would trigger a series of events that revealed a group of professional FIFA players colluded to avoid playing each other, thus earning easier wins in a pseudo-match-fixing scheme that would make mid-2000s Italian football jealous.

RunTheFutMarket, real name Nick Bartels, is a 21-year-old streamer and content creator who boasts a large following in the FIFA scene. Praised for his knowledge of the in-game transfer market and ability to amass large amounts of Ultimate Team Coins without the need to spend real money, Bartels is a well-respected player. On Sunday, 20th October, Nick was on course to reach a Top 100 ranking when the pivotal game of the weekend disconnected during the dying moments. Disconnection in FIFA is common, often due to loss of access to EA's servers, which are liable to go down many times every weekend. Typically, this results in a loss for both players. This is random, however - several glitches are alleged to exist that players willing to cheat can use to force both participants from the game, awarding their opponent a loss, and the user of the glitch a fresh game without a blemish on their record.

What makes this incident notable is Bartels later claimed on Twitter this was his first disconnect in three years, raising suspicion of malicious actors attempting to sabotage his run. However, what Bartels would reveal later that night would send shockwaves throughout the FIFA community. 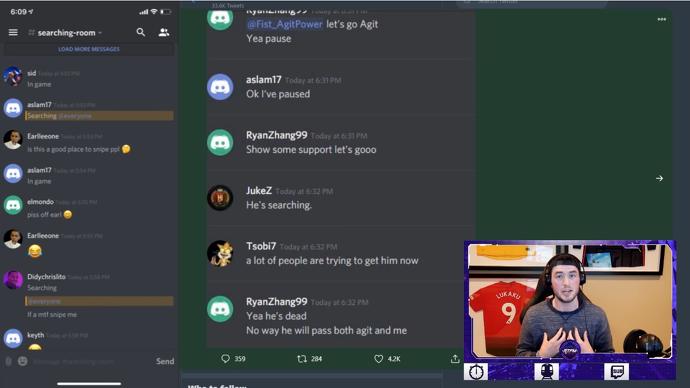 Following the loss, Bartels tweeted several screenshots that showed pro players in the North American FIFA scene commenting on his run and conspiring to end it. He acquired these screenshots through a friend of his, a fellow pro player Bartels has refused to name and was a part of a "dodging Discord", a server in which pro players conspire to avoid playing each other during the Weekend League, leading to easier games. (Imagine the likes of Manchester City, Liverpool and Chelsea were getting together to tinker with the Premier League fixtures list so they never had to play each other during a season.) But the FIFA pros were also "stream sniping" - that is, watching Bartels' Weekend League stream and searching for games at the same time in a bid to go up against him.

In a 29-minute video uploaded to his channel entitled This is Unacceptable - FIFA 20, Bartels addressed the situation to his community. He begins by expressing the feeling of many players in the highest level of competitive FIFA: "It made me realise two different things, right? One thing, with this game, it's not good enough to be in a competitive state."

Bartels goes on to show off screenshots featuring posts by pro players including Chicago Fire player Hektic_Jukez, RyanZang99 and eChampions League Winner and New York City FC pro player Christopher Holly, known as NYC_Chris. Bartels explains this Discord features most players in the higher tiers of FUT Champions in the North American region. But the Discord didn't begin life this way. "This Discord was started for North American players to play competitive games with each other to practise," Bartels says. "Then what it turned into was a dodging Discord."

Bartels believes the reason these players have been targeting content creators such as himself and fellow popular FIFA YouTuber Mike LaBelle, who was excluded from the Discord despite his status as one of North America's top pros, is money: "If he gets Top 100, he will get more subscriber money for that Top 100 finish and more ad revenue off his reward video than I have made all year."

While FIFA is incredibly popular, the actual amount of prize money awarded to players is relatively small. Despite FIFA 18 earning £2.3bn, the following game's tournament prize pool was collectively less than $4m.

As the video continues, Bartels highlights the EA Global Series Terms of Service that this conduct seemingly broke, specifically the clause that prohibits "colluding with other players in playing games; selectively matching up against the same opponent repeatedly".

We reached out to Bartels for further comment on this story, but he did not respond at the time of publication.

EA eventually responded on Friday, 1st November, with a statement given to Eurogamer and a longer response posted on the EA website. Not only did EA acknowledge the existence of the dodging Discord, it imposed a two-qualifier ban on one of the most successful FIFA players of all time, Christopher "NYC_Chris" Holly.

"The integrity of our tournaments is of the utmost importance to us, and we monitor our competitions on-and-off the pitch to ensure fair play," reads the statement. "We identified a player violated the EA Sports FIFA 20 Global Series Code of Conduct because they used an out-of-game Discord channel to dissuade players from competing against them. This competitor will receive an EA Sports FIFA 20 Global Series two qualifier suspension."

EA provided the following explanation for Holly's suspension, specifically, the Code of Conduct violation for which the player was being suspended: "... colluding with other players in playing games."

And EA addressed the stream sniping organised through the dodging Discord, calling it "harassment". "Harassment as part of a coordinated effort to match with streamers during the Weekend League, unrelated to a competitive advantage, was also investigated," EA said. "Final warnings for those confirmed to have taken part in these activities were issued and cover future instances of similar behaviour."

While far from the only player to engage in this behaviour, Holly's status as one of North America's top players and the inaugural winner of the eChampions League, and EA's willingness to make an example of him was welcomed by many. Holly himself posted the following to Twitter after the ruling:

"I want to say I'm sorry and apologize to NYCFC, EA and to the fans. I've made a mistake that I will learn from and I'll do my best to earn your trust back."

We reached out to New York City Football Club for a response but did not receive one before publication.

Also included in this statement was the announcement of the banning of a second player, Kurt Fenech, better known as Kurt0411, an outspoken FIFA content creator and pro player. While not implicated in the dodging Discord scandal, Kurt has previously been the centre of controversy in the FIFA scene after quitting a live event mid-game, and then later interrupting a fellow content creator, Castro_1021, during a live interview at an EA event. In response to this ban, Fenech has posted several videos explaining his side of the situation; doubling down on his targeted harassment of EA employees, which was stated as the reason for his ban in EA's post as well as the previous offences.

The sentiment in the FIFA community following these events has been even more dejected than usual. The situation feels far from resolved, and with more players almost certainly involved in these dodging Discords than those revealed by Bartels, it feels like FIFA's esports scene is at its most fractured. The revelation of a dodging Discord has called into question past Weekend League results from popular pro-players and the integrity of official tournaments, whose participants are in part determined by Weekend League performance. In his video on the matter, LaBelle points out a recent Weekend League saw 75 30-0 players on the PS4. "75 people never matched up against each other," he says. "If you look at the 29-1s and 28-2s, you're probably looking at a few hundred people who the majority of the time aren't playing against each other." Bartels suggests collusion among FIFA pros has gone on for at least six months, but it could be longer. And it is almost certainly not limited to North America. "It's clearly happening in Europe and Asia," LaBelle says. "All the regions I'm sure have ways where they've figured out how to not play against each other througout the Weekend League, so they can try to reap the beenfits of the best rewards, the best packs, and it just makes it easier to build up your squad."

Bartels concludes his video response by drolly asking for an invite to the dodging Discord, before quickly following up with: "You know I was going to decline, but at least I would have liked the invite."

He ends his video by saying: "I know there is going to be more of you than ever coming for me, I know that... If anything, you guys are going to give me a bigger viewer boost when I beat you."

What boggles me is that a microtransaction-riddled money generator like Ultimate Team actually has a competitive scene.

But, that's the market for you I guess. In keeping with Ultimate Team itself, the situation is a big ol' mess.
H

Why the fuck don’t they just use ELO ranking like everyone else?

What I find funny in all this is that we now have Virtual Price Fixing....I never thought this could ever happen (given the microscope on this type of thing).

Now that is actually is a thing, I am shocked and kind of laughing at how this combines with the Micro-transactions controversy.

Corruption and FIFA go together like EA and microtransactions

Everything sorrounding the name FIFA is corrupt but

could please anyone resume this for people that dont like soap operas?

FUT IS TRASH, one thing fifa has going for it right know is the 11v11 pro clubs, which they dont give 2 Fs about sadly.
You must log in or register to reply here.

mcjmetroid replied
Mar 4, 2022
FIFA 23 will reportedly include cross-play and expanded women’s leagues. The Men's and Women's World Cup Will Also Be Given Prominence (VCG)
Opinion News 2