Humans will eat maggot sausages as a meat alternative: scientists

One hot dog, please — heavy on the maggots.”

Food scientists at the University of Queensland in Brisbane, Australia are incorporating insects such as maggots and locusts into a range of specialty foods, including sausage, as well as formulating sustainable insect-based feeds for the livestock themselves.

Hoffman says conventional livestock production will soon be unable to meet global demand for meat, so other fillers and alternatives will be needed to supplement the food supply with sufficient protein sources.

“An overpopulated world is going to struggle to find enough protein unless people are willing to open their minds, and stomachs, to a much broader notion of food,” says meat science professor Dr. Louwrens Hoffman. “Would you eat a commercial sausage made from maggots? What about other insect larvae and even whole insects like locusts? The biggest potential for sustainable protein production lies with insects and new plant sources.”

The Queensland Alliance for Agriculture and Food Innovation (QAAFI) team is focusing on pleasing Western palates by disguising insects in pre-prepared foods, says Hoffman, as studies have shown they shy away from eating whole insects.

“In other words, insect protein needs to be incorporated into existing food products as an ingredient, he says. “One of my students has created a very tasty insect ice cream.”

In terms of other sustainable sources of protein, Hoffman also brings up kangaroo meat — ideal because they don’t require grasslands for grazing. They are also supplementing chicken feed, which is currently made mostly of grains, with black fly larvae, with promising results.

“Poultry is a massive industry worldwide and the industry is under pressure to find alternative proteins that are more sustainable, ethical and green than the grain crops currently being used,” says Hoffman, and points out that wild chickens eat mostly insects.

“It’s all pretty logical if you think about it.”

Hoffman notes that while eating bugs might seem bonkers to Westerners, “for many millions of people around the world they are a familiar part of the diet.” He also calls for a “global reappraisal of what can constitute healthy, nutritional and safe food for all.”
Click to expand... 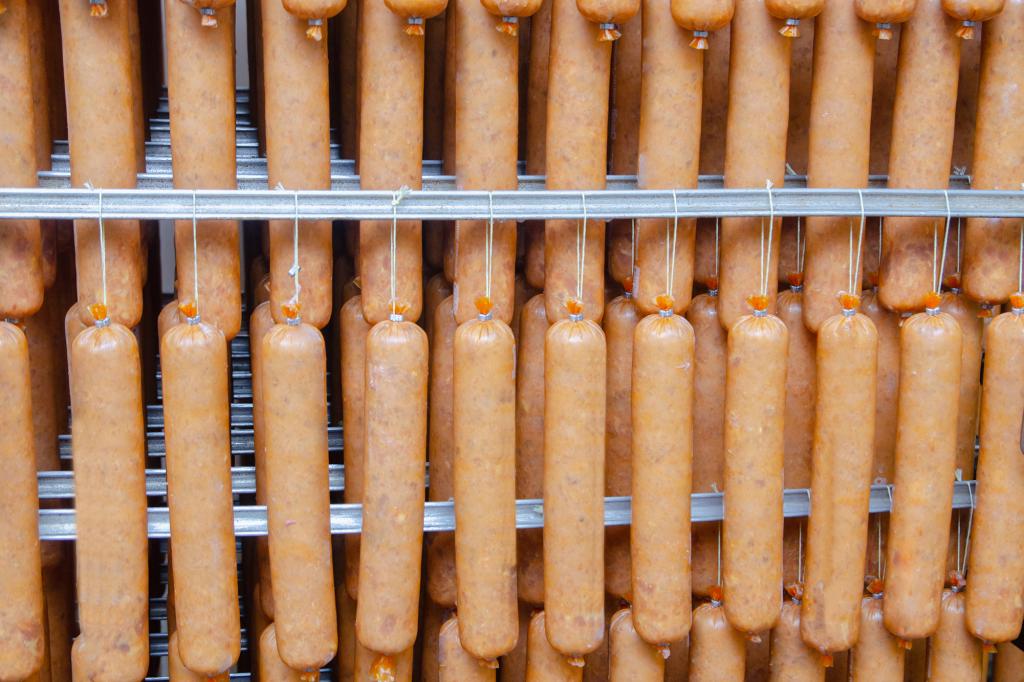 Humans will eat maggot sausages as a meat alternative: scientists

“One hot dog, please — heavy on the maggots.” Food scientists at the University of Queensland in Brisbane, Australia are incorporating insects such as maggots and locusts into a range o…

Ignore the thread title. I fucked it up! Lol

She gonna drive all the white people away with maggot sausage's!

How did you confuse maggot sausages with that title?
Last edited: May 1, 2019

CurryPanda said:
Ignore the thread title. I fucked it up! Lol
Click to expand...

You didn't fuck it up at all. Ilhan Omar and maggots go hand in hand as far as I'm concerned

Did that fart woman really say that???

Scientists will keep saying this and we'll keep not eating them. A tale of milquetoasts and actual humans, eternally retold!

I’ll never eat maggot sausages in lieu of real food. The world will burn instead.
R

No, no we won't. Get back to work on lab grown meat, scientists.

I don't see why we would accept -- let alone celebrate -- the degradation of our food supply. I understand that maggots can be used as a decent source of protein, but if they were so useful then I expect our previous generations of human cultures might've used them more prominently.

How about finding ways to improve the living conditions and quality of traditional cattle? Oh wait, farmers have been doing that year after year yet never seem to get credit for it...

Whether they're crying about how we shouldn't be powering our homes with coal and oil, or crying about how we obtain our meat, these doomsayers always want to warn us about the impending future destruction at the cost of the very infrastructure that supports their cushy lifestyle.

Gross. If i don't get my meat anymore i will become a vegetarian or even vegan before eating maggots.

We'll just tell the filthy plebs to lower themselves to eating bugs, which they will. *Laughs*

They say it like we are knowingly going to eat maggots.

I really hate scientist thinking they can control populations with their "miracle" inventions. The same groups who gave us all the pesticides, pharmaceuticals and modern agricultural disaster waiting to happen.

They ruin the food supply and then come in with a ridiculous solution.

I'm 100% on board with trying new insect & plant based proteins.

Just mash it up into a sausage or patty and westerners will eat it. As opposed to frying up a spider and giving it to them on a stick which the average westerner will never eat.

I'm all for it.
I've seen Starship Troopers, insects are not cool. If they were big enough they'd be eating us. Happy to eat them.

DunDunDunpachi said:
if they were so useful then I expect our previous generations of human cultures might've used them more prominently.
Click to expand...

They did and still do. It's just been mostly lost in western diets.

daveonezero said:
I really hate scientist thinking they can control populations with their "miracle" inventions. The same groups who gave us all the pesticides, pharmaceuticals and modern agricultural disaster waiting to happen.

They ruin the food supply and then come in with a ridiculous solution.

Ruin the food supply? Google Norman Borlaug. He's one of the reasons your ancestors had enough to eat and didn't starve to death before giving birth to you.

You ready to give up the miracle inventions of these sneaky scientists like GPS, the internet, electricity, PCs, smart phones, vaccines, and pretty much all of modern society?

Rentahamster said:
Ruin the food supply? Google Norman Borlaug. He's one of the reasons your ancestors had enough to eat and didn't starve to death before giving birth to you.

You ready to give up the miracle inventions of these sneaky scientists like GPS, the internet, electricity, PCs, smart phones, vaccines, and pretty much all of modern society?
Click to expand...

I'm ready to give up their centrally controls and regulated versions. I think cities are obsolete and there is technology to make food without shipping it halfway across the world to feed people.

Most of these Industries are too reliant on subsidized fossil fuels and petroleum chemicals. Things that wouldn't be cheap unless the USA forced other economies into dealing with them and destroying their sovereignty as nations.
Last edited: May 1, 2019

You can milk anything with nipples.

When will you make the thread with the first topic?

Rentahamster said:
They did and still do. It's just been mostly lost in western diets.
Click to expand...

Learning to mass-produce maggot protein didn't result in the modern population explosion, is all I'm getting at.

DunDunDunpachi said:
Learning to mass-produce maggot protein didn't result in the modern population explosion, is all I'm getting at.
Click to expand...

So? There's more than one way to skin a cat, as the saying goes.
M

Rentahamster said:
So? There's more than one way to skin a cat, as the saying goes.
Click to expand...

Yeah, but cat-meat is gross and is susceptible to parasites, and on the same token there are sustainable ways to make "normal" meat without resorting to maggot-farming (or cat-skinning

I understand the spirit of what you're saying: why reject an option -- no matter how gross it might seem -- if it's viable? And I admit, that's a fair way of looking at it, so let's go down that trail of thought.

If traditional cattle and poultry farming have gotten us this far (historically accurate), and there are correctable problems with our modern methods of cattle / poultry farming (which the Foodpocalyptic scientists are pointing out), then the more logical course of action would be to first invest our time into improving existing methods before worrying about Hail Maggot Mary passes intended to save future humanity from starvation.

The same goes for vegetable / grain farming. This is an area I've learned a lot about in the past 5 years as a hobbyist / amateur, and you'd be amazed by the nifty farming techniques making their way into modern farms. Farmers are always trying to improve the way our food turns out, even the Big Ag ones that use Monsanto products.

So why not improve what we have instead of resorting to doomsday scenarios?

Or why not use the maggots for some other purpose? For instance, what if I farmed maggots and fed them to chickens or goats instead? What is the impetus for me to eat an inferior food source? You'll notice that is exactly what the central proponents for maggot (and insect) farming suggest doing.

lol no we won't. these people need to get out of their bubble.

tbh i would rather eat a scientist than a maggot sausage. they would have just as much luck studying the positives of cannibalism.
Last edited: May 1, 2019

I would rather eat a rat burger.

I won't eat that crap even if there's no more animal meat left in the world, which of course will never happen. If it does I'd rather go vegan.

Even in the event that animal meat becomes super scarce, do you think people with money will settle for maggots? Of course not, they will still treat themselves to the delicious meat we know today. I bet these scientists who are pushing for maggot sausage won't eat it themselves. So fuck them.

Maggot food is meant for the have-not and oppressed, just like the "protein bars" in the movie Snowpiercer. Scientists can shove it up their ass.
Last edited: May 1, 2019

Looks tasty to me 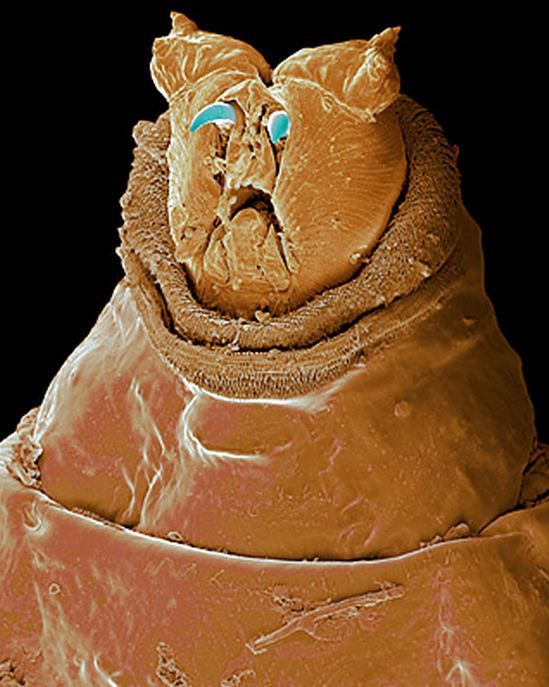 Europeans used to eat bugs - Aristotle wrote about it, the Romans ate them. Cockchafers were cooked and even sugar-coated since medieval times.

As long as it's tasty and safe, why not eat it?

I actually ate a chocolate covered cicada once. It wasn't bad, tasted like a gritty french fry.

Nope. I’m not one of those humans

Musky_Cheese said:
Nope. I’m not one of those humans
Click to expand...

Are you even human? I'll let the internet decide.

Now I am hungry for a maggot sausage.

Insane Metal said:
Are you even human? I'll let the internet decide.
Click to expand...

Rockstar from mars isn’t human to you?

I probably have already tried one of these. They add a bunch of unknown additives to sausages. Who knows what the hell is in them? What you don't know can't hurt you.

I'll eat whatever it takes for gainz.

I couldnt help it.. 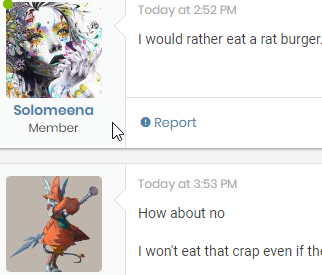 also what was the original title?

Article feels misleading. Larvae like maggots are pretty damn different from bugs. For people who are hearing about this concept fresh, I don’t think it’s fair to base your opinion on the eating of maggots (that grow in corpses, and where flies come from). It’s difficult enough to wrap your head around eating crickets. Scientists have known for a while that these are viable and sustainable protein sources for people.

I'll go hunt elk with Joe Rogan before anything like that happens.
Last edited: May 2, 2019
You must log in or register to reply here.

nush replied
Jan 9, 2021
The world's first octopus farm - should it go ahead?